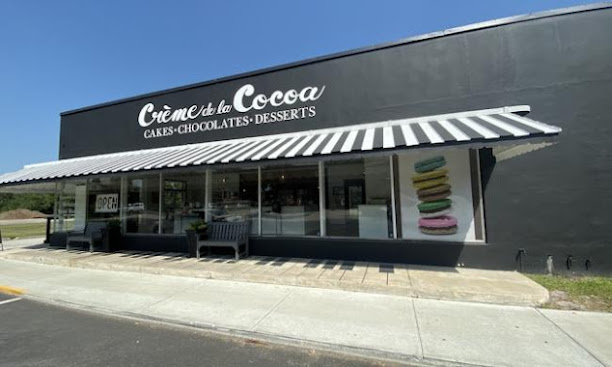 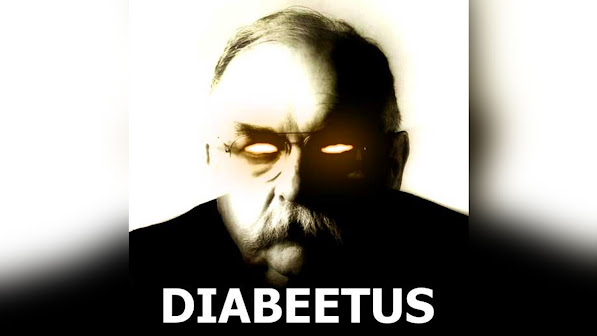 Yeah... so this here happened: 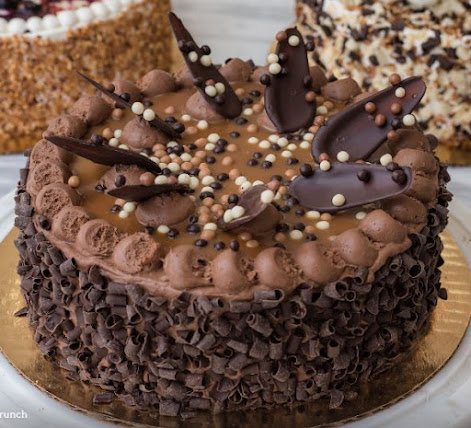 I said "Fuck it" and bought a whole cake this time.  Salted Carmel Crunch.

I said instead of a expensive dinner, lets go cheap and use the dinner money on a great cake.  Wifey being the sugar addict she is fully agreed.  There's also a secondary to this reasoning however.  Last night, just about as soon as we left, well Dumbunny calls us.  And calls us.  Seems the NewBebe was crying notstop.  Now, she's teething rather badly.  So it's to be expected but considering she was never around having lost GranBebe #1 to -us- at 6 months of age, she's a clueless mom on this stuff... she's been (DB ) a total pain-in-the-ass.
So instead of dealing with it, she had Sapper take her and NewBebe to the E.R. because we wouldn't drive back from St Augie to deal with it.  End result she supposedly has pneumonia (I want to see paperwork) and NewBebe has a minor chest cold on top of teething.
Sooooooooooo now DB is racked out for the next few days, and the neighbors are helping out, and we owe Sapper, so I figure to pay 'em off with cake.  Who doesn't like cake?  Especially THIS cake Aye?
So, looking over the Headlies propagated by the Ministry of Propaganda and Lies (tm) it would be apparent that the niggers in places of fame, like "King James" LeBron-the-Coon is talking shit about Kyle Rittenhouse for breaking down on the stand... as well as the MSNBC niggers who talk about him like he's an eeeee-vil Whytte Superpreemiecyst.
This from "king in his own Mind" Lebron... didn't he cry like the nigger-bitch he is on the court when he twisted his widdle leg one or more times?  Tell you what... I got zero use for any self proclaimed "king"... Note to you you ball-sucking-nut-chasing ape... you got no place  A) in calling yourself a "king" (small K) and B) talking shit about your betters.  I hope that at some point the rest of the Whytte Peepo in the world wake up to the uselessness of your 'sport' and decide to stop buying your overpriced shit, and eventually the remaining 13% of your 'people' and I use the term oh-so-loosely fail to be able to pay your absurd salary.  Ball suckers like you are just worthless... you couldn't hold a real job at a Mickey D's if your undereducated and illiterate ape-self's life depended on it.
Remember Sambo, OUR Great Grandparents (metaphorically speaking, look it up fag) OWNED your Great Grandparents monkeyboy.  IF you're lucky, WHEN and NOT if the Race War YOUR kind is itching for comes about, WE outnumber you 300 to one, and the last time we played "Cowboys and Indians", ask how it worked out for them?  That is provided you can even -find- one... got a hunch "Cowboys and Niggers" will run about the same.  Ain't gonna be no 'take backsies' and sure as shit no quarter given.  Ask Cannon Hinnant if he asked to be shot in the head by one of your feral relatives.
Did you see if there was anything you could say then?
No?
Then shut your fucking trap.
Yeah, I'm waaaaaaaaaaay overly done with 'muh Diversity!'.  Had a minor run in with a yardape today who, when I stepped from the car and took out my ASP baton, and asked him "You want to repeat that again nigger?" did he -suddenly- change his aggressive and aggrieved tune.  Dude jumped back in his car and smoked the tires getting the fuck out of Dodge.  What happened was the Fucker cut me off so I flipped him off.  He then brake checked me at the red light, and I yelled at him that he was an asshole... had no idea he was black until he jumped out of the car aggressively and started approaching my car...
I was out getting a pizza for me n Wifey so's I wasn't worried about her getting spattered.  My 9mm was safely holstered but on me... if he'd had a weapon I would have just capped him flat-out.  Been in the right too.  When he -didn't- have anything immediately visible, I took the snap-baton out of the door pocket where I keep it and came out defensively.  Gave him MY version of what was going to happen when he had a -sudden- change of heart.
Between my size and aggressive nature, rather than the usual soy-fag whypeepo he's probably used to, he retreated like I was "Da Whytte Debbil Hisself!"  Works for me amiright Aye?
So, other things... a quickie observation here is that over HALF the restaurants here in St Augie are closed for a lack of people willing to work.  Like Applebees, a Chilis, and man, I lost count of how many places that're closed.  The guy at the Buffalo Wild Wings that we went to at the bar?  Said he's making a $300 a pay period ($150 a week) in bonuses and gets to make his own hours.  He's also making tips and his salary.  Dude said if they don't keep him happy, he'll bail and he'll be employed within a day... he's been getting offers out the ass he said...
Workers market in food service it would seem to be in the driver's seat so to speak depending on the Market.  Now where I'm at?  Haven't noticed any -lack- of workers.  Might be because here in St Augie the rent is WAY high, so people moved to greener and cheaper pastures rather than work for shit-wages and live in a high priced AO.  Places like my area, a person CAN work as a Bartender and make OK cake and a living, whereas a place like this?  Notsomucho.  Too expensive and with the current inflationary trend?
Yeeeeeeeeeah being a waiter/waitress/bartender?  Unless you get some serious shekels, you're not going to be able to survive unless you have multiple jobs.  And the other problem that I see, from a bugs-eye view is since we shift over the past 25-30 years to a pure consumer economy?

Yeeeeeeeeeah, all them closed restaurants?  In a major tourist destination?  Much lost income on the bottom line?  I'd say.  Fucking yeah, Applebees is only a small piece of a VERY large corporate food Globohomocorporation, but considering just -how small- the profit margins can be?  Yeah, it bodes ill for the overall scenery.
I mean in San Freaksicko in Califrutopia, something like ALL the Walgreens, the Targets and a bunch of 'other' giant Globohomocoporate companies are shutting down and bailing because of 'muh Diversity!' stealing anything and like everything not nailed down without repercussion nor arrest, so why the fuck shouldn't they?  I mean eventually the insurance companies are going to NOT pay out due to this shit... it's like Lloyd's of London refusing to insure bad-risk boats...  Why would insurance companies keep insuring the theft that 'muh Diversity' keeps robbing and stealing?
So that's another piece of a very fucked up economic puzzle.
Got a hunch things are headed to a trainwreck of epic proportion
Hence my -trying- to enjoy what I can, while I can.
Methinks time is ticking and limited
So, More Later I Remain The Intrepid Reporter
Big Country

Posted by BigCountryExpat at 7:43 PM