Greetings Me Droogs N Droogettes!
A s-l-o-w quiet Sunday, with Dinner a'la BCE on the menu.  In this case the turkey dinner we -didn't- have on Thanksgiving.  Reason was multi-fold so to speak.  One was the night before was a ball buster keg party of a Birfday Celebration, with all the food we could eat.  Two was we had a small ham, tater, green bean and the Xwifes famous stuffing on Thanksgiving itself.  May have my issues with her but the Italian Sausage Based Stuffing recipe of hers is and always will be a keeper.  Then we had 'leftover night' to clean out the previous two days of grub.  And Booze.  And we -still- have shit that's going to go to waste I'm afraid. 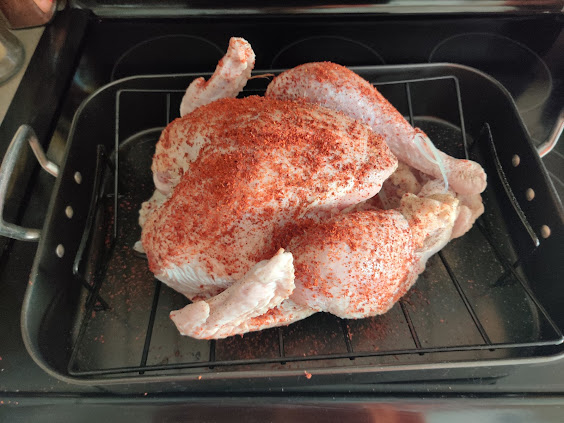 So... the turkey.  Sapper literally got an ENTIRE T-Day Dinner gifted to him from his work.  To include the previously-frozen 11 pound turkey.  Which -has- to be cooked.  So I decided tonight's as good as any, so I'm playing with it so to speak.  I brined it dry in salt and a bit of pepper, then used some Middle Eastern Spices I lern't aboot in all my time cooking on the economy in Iraq.  One that I rubbed in was ras-al-hanout, and then, the red?  A fragrant spice called Aleppo Pepper.  It's not hot... just... unless you've had it before, it's hard to describe to a westerner... very fragrant, flavorful spice.... usually adds a hell of a taste kick to whatever you use it in.  I have like a few sealed airtight containers on hand as it's expensive and hard to come by.  We'll see how it goes.
So... newsie-news.
Seems the smash and grab shit all over the country finally claimed the life of a retired cop.  https://www.foxnews.com/us/smash-and-grab-thieves-attack-stores-around-the-country-california-security-guard-shot-dead-as-crime-rages 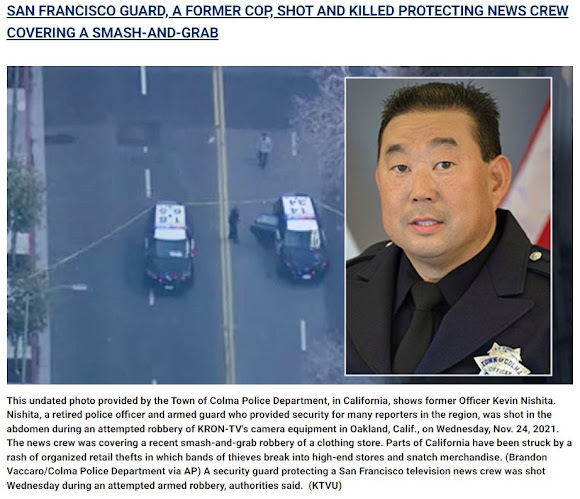 Seems he was working security for the mobile news team covering the story of ANOTHER smash and grab, and ANOTHER group of niggers showed up to rob THEM, and shot this poor bastard.
And it's ongoing.  Now, First off:  As far as media folks "doing their jobs" if I was a security company/guard, at this point, I'd be like the Reverend in "Blazing Saddles"

Serves them shit-stirring fucks right to be robbed, raped, shot, and beaten by the thugs that they theyselves have stirred up Aye.  Poetic fuckin Justice in spades in my book.  Not for nothing, it's the fucking Ministry of Propaganda and Lies who've kept this dung ball rolling so to speak, and they deserve every. single. shitty. thing. owed. to. them a million times over and then some.
Now, to counter this kind of bullshit would be easy.
Just an Executive Order pardoning any and all action taken against 'rampaging mobs of any ilk' with no civil nor federal, county or local repercussions being allowed to be brought.  No civil right suits, no lawsuits, nothing.  Meaning if a mob of thieving feral nigger animals shows up in your shop and proceed to tear shit to hell and gone and steal anything and everything not nailed down, and you unlimber a AR with a 40 round MagPul mag and proceed to stack bodies, you get a 'get out of jail' card, no matter how much kveching, whining and accusations of racy-cyst action they claim.  (It'll never happen, but go with me on this)
Look, if you act like feral rabid nigger animals, (which are no better than rabid fucking animals) then expect to be treated like feral, rabid nigger animals, and be put down like Ole Yeller.  Same goes for any other race that participates in this level of stupid.  Play stupid games Aye?
Same shit should apply at a riot.
THAT right there is why all the leftoid fucking zombies are shitting in their collectivist pantaloons over Kenosha Kyle getting over on the whole scene.  It's now readily apparent that the 'terror of mob violence' tool in their toolbox was just rendered "null and void."  'Cos I sure as fuck here in Florida don't have a 'duty to retreat' and according to some cases, my car is an extension of my house, ergo Castle Doctrine anyone?
Go ahead, block the road, try and play "Reginald Denny" with me and my ride, see what that earns ye.  Want to show up, start shit, possibly pummel someone without fear of retribution?  Oh yeah, that shit is now gone motherfuckers.  You start laying a beatdown, and it's going to go "full retard" beaucoup quick.
So much as that MANY of the fucking Bowel-Loose-Movement kids and Antifaggots have decided that in the future they'll be the ones to 'shoot first' which just demonstrates the level of stupid that they are... That's a Pandora's Box that they do not understand.  Shooting -just because- you think you're in danger because an OrangeManBad supporter is carrying a rifle at sling-arms?  You shoot that kid without provocation and I can gar-ron-damned-tee that you'll be the next one in a body bag, along with every. single. asshole. around you.
'Cos once the two way shewtin gallery starts, it's gorrdamned hard to turn it off.  Me being the sick fuck that I am, If I were involved in such a melee?  I'd be doing immediate battlefield intel gathering...like taking your drivers license off your cooling canoe-headed corpse...  and then possibly, depending on how pissed I am driving to your house and killing everyone there for allowing such a retarded asshole to be -in- this world... Your Mom, your Dad?  Yep.  Burn the house to the ground after... You learn't to be a fucktard somewhere... assault through the target and keep servicing them.  Depends on how mad I am at the time... either way I'd still do the field intel gathering.  One it makes things hard for the fuzz to figure out who's who on the players are, and playing jiggery-pokery with the corpses can add to the fun and games...
I'm not even outside the realm of ear gathering, if only to fuck with the survivors IF there are any.  I mean I wouldn't keep them nasty fucking things... that's evidence.  Bit of battlefield mutilation?  The psychological impact on these easily triggered fucks?  Oh my fucking God can you imagine?  Got me a hunch it'd only take ONE significant in-the-national-limelight Firefight like that to paid put to the end of AntiFa and the like.  Shit, Demo Dick Marchinco of SEAL Team 6 fame, in Vietnam, he and his guys kil't a bunch of gooks.  Took their corpses, cut off their heads, sat and propped the stiffs up, with their own heads in their laps... literally sitting there around the fire, holding their own severed squashes in their laps...  according to records, enemy action in THAT particular sector dropped off to nada overnight...
I'd say that the same shit would work here too.
And what the hell, after the first rounds go two-way travel, the rest are fucking free.
At which point it either goes into "OK everyone, let's step back from the brink here"
or the more likely scenario
The FedGov freaks the fuck out, does a massive manhunt and gets even stupider than before
Alienating anyone still on the neutral side of things.
So, doubt it'll happen, but that's how I see things going, on a sllllllooooooooow burn
So, I'll let ya know how the rest of the day goes and how the turkey is/was.
More Later I Remain The Intrepid Reporter
Big Country 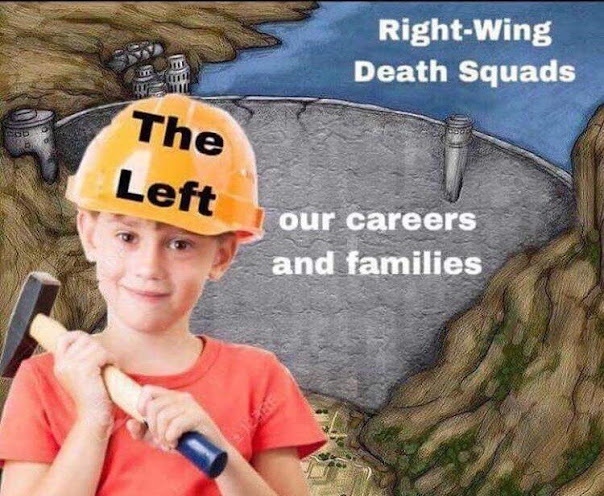 Posted by BigCountryExpat at 2:29 PM