Greetings Me Droogs N Droogettes!
So, Wifey fell in the shower...  She's ok but a HUUUUGE black n blue bruise on her ass.  Dumbunny spilt some conditioner in the shower and -didn't- hose it off the tile.  My shower is one of those McMansion style Big Ole Chambers that is a room unto itself.  I added a big ole Sun Shower showerhead many years ago, and I used to have a bench in there that was a really useful addition for the hungover mornings.  X took it as part of her prize, and I think it was strictly a 'because I liked it' as from what I heard, her current living conditions are not near as sybaritic as mine.
But she's ok.  Sorry, sore and pissed but hey, What else is new?
There IS a cool addition to my wall of coolness: 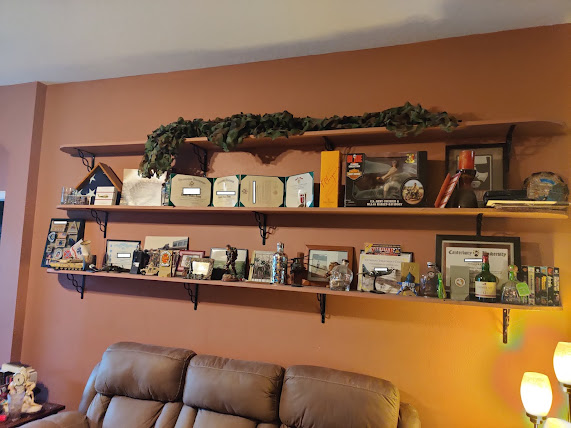 Doxxables appropriately whited out of course.  Those shelves I put it for X back when we first moved in for her Breyer Horse Collection which was substantial and worth a pile of cash... not that she'd have even given any of it up... nope, to make ends me it was my guns that were always on the chopping block.  But it is what it it.  I did a killer job making and installing them.
Now they have all my what we called in the Army an "I love me" wall.  Most old school guys have just a bit of their stuff up, but since I was never allowed to put my 'stuff' on display, when I went single, I went full retard.  Jump School(s) diplomas, Medals, Honorable(s), Photos, Awards and models of all the significant vehicles to include Aircraft I jumped or fell out of.  Along with significant stuff like the empty bottles of hootch from significant events appropriately signed and dated.  Good memories and Wifey's been Cool AF as far as living in what she calls a "Military Frat House"
She of course is an accomplice in this, so she got no reason to bitch.
Hence my early Birfday Gifty: 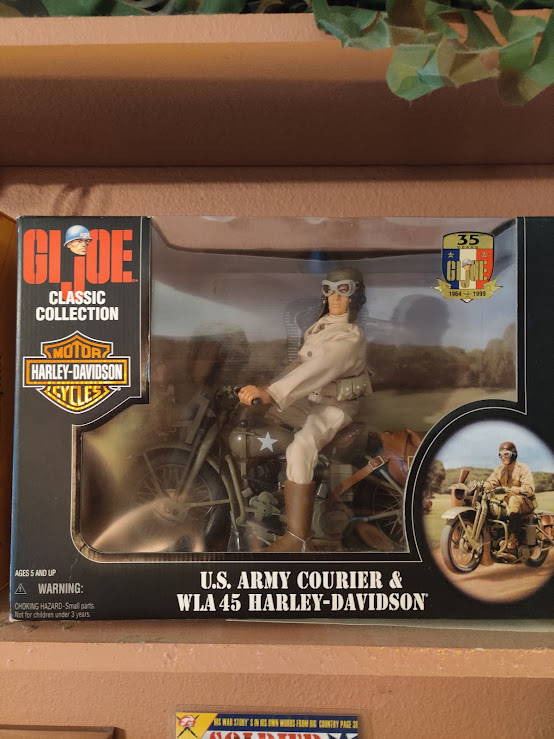 Damn that's cool... New In Box MINT 35th Anniversary GI Joe with Courier Harley.  We found it while antiquing.  AND she paid, no kidding, $22 for it.  It was on the %40 off shelf...  Damn!  I looked, it's on Ebay for like $100 and up...  she got it and managed to hide it til last night when I needed to go out to the car for something, and she was like "Your early b-day gift is in that Cardboard Box!"
I'm very pleased.  Got me as Mike over at Cold Fury said:  "I got me a hell of a woman"
That I do Mikey, That I do.
So, I gotta go help her out.  Some more.  <Le Sigh>.  Never stops around here and yes guys I will be in contact shortly.  Those awaiting comms from me I -know- y'all are out there, I'm just juggling a lot still.  Tomorrow for instance is NewBebe's First Birfday Party at Other Rents, which in itself presents a shitpile of logistical and other challenges.  Swear it's almost a good thing I got the extra down time between jobs... I need the extra time at this point.
"The Only Easy Day Was Yesterday"
Fuckin Aye that.
More Later I Remain The Intrepid Reporter
Big Country 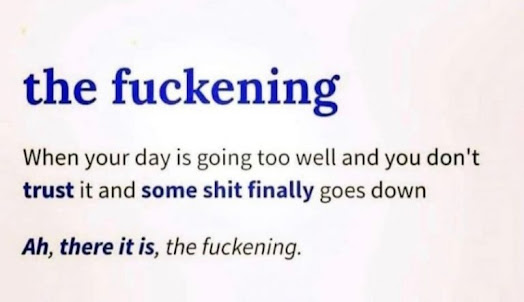 Posted by BigCountryExpat at 4:49 PM