Made it Home and Moose

Greetings Me Droogs N Droogettes!
Shaved 21 minutes off my record back home.  2 and a Half Hours flat.  Average speed 82 MPH.  Not a single 5-0 in the entire ride.  Only time it got 'hairy' was on the back roads.  Had to keep a keen eye open for deer, as it's that time of year and I didn't want to destroy the car with hitting Bambi.
True story:  Buddy of mine was waaaaaaaaaaaaaaay up North in Maine.  Turned a corner on a back road and hit a fucking Moose.  Totally deeee-stroyed his ride, fucked him up and the Moose?  Stood up, huffed at the wreckage and ambled off into the hinterlands.  Took two hours before a passer-by came on the wreck (this was pre-cell phones) and then an additional hour for the rescue guys to get to him.  He lived but walks with a limp. 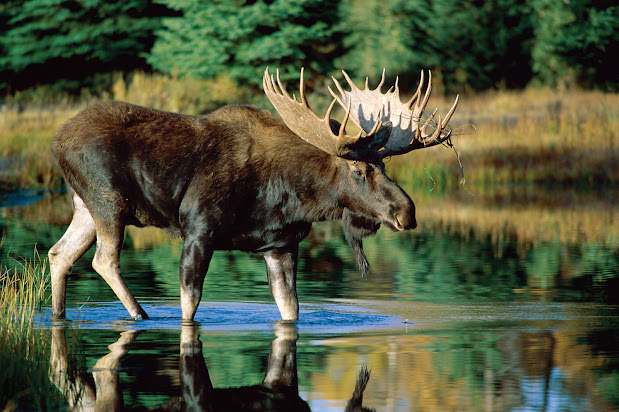 Hates Moose too.
Goes hunting for 'em every year he can, when he draws a tag.
Wants his revenge apparently.
Another true-Moose-story.  I used to after Gulf One live in the foothills of the White Mountains.  Little shitty Trailer.  Singlewide.  ZERO insulation, and winters there were a ball freezing bitch let me tell you.  We used to have to wear 3 pairs of socks, two pairs of sweats, and I slept in the winter in my extreme cold issue DotMil Fartsack... cozy cozy.  It was a Prime deer poaching area though.  No one really around.
Closest local town was Farmington... it was a flyspeck back then.  Heard it got bigger.  But we used to go into town for supplies and ammo at the local gun shop.  One fall, we heard that the guys (the real locals) who hung out on the reg at the gun shop talking that they'd 'drawn a tag' for the Annual Moose hunt.  In Maine and NH there's a limited amount of Moose Tags to legally hunt them big fuckers.  Really limited.  So the guys told us to stock up on ammo (it was a weekly resupply for us back then every Wednesday to get ammo and food) as they'd be all gone the following week for the Great Moose Hunt.
And they were.  We went back the week after and found everyone sitting around, a bit dejected.  We inquired as to why, and it seems that after allllll the preparation, all the planning, all the getting ready for a week in the woods, they set out on Sunday, with the intent of coming back the next Sunday IF they didn't bag a Moose.  If they DID bag one, they'd be back that same day as the kill, as they didn't want the meat to spoil, and THAT much meat they couldn't store... a Moose'll run you 1600 pounds, 500-600 pounds of good meat when processed.
So, they went out, convoy style with the RV, couple of Pickups and a trailer full of ATVs.  They went waaaaaaaaaay out into the boonies, down the main powerline trail with the BIG Towers that carry power to and from Canada and whatnot... them GIANT powerlines you see.  They were setting up camp, when they suddenly heard a "Ka-BOOM!" and look over to see the Local Preacher who was accompanying them holding his rifle, still smoking, and saying "By God I got 'im!"  Looking over to the next hill just in time, they saw the Moose fall over stone dead.  Seems as soon as the Preacher got out of the pickup, he spotted the Moose on the next hillcock, and cut a round out right then, and right there.
So much for a week off of work and away from teh wimmenfolks Aye?
Yeah... a good kill, but man, them boys weren't happy none too much, and even worse, they really couldn't blame the guy, as sometimes -finding- a Moose is half the battle, nevermind actually capping one...  They ended up mounting it's nugget and putting it in the gun shop.  Even gave us some Moose Jerky they made... really good stuff.
But, just a quick one for now.  Dumbunny's been sick, the house is trashed so's now after being gone I have to clean the whole house.  I'm doing laundry first, already loaded and run the dishwasher, and then I have to change the sheets on MY bed 'cos the bitch don't respect boundaries and ate crackers on my fucking bed, so's the sheets are crunch nasty.  Add on the floor feels gross... she spilt soda all over or something...
Maaaan this's getting old.
So More Later I Remain The Intrepid Reporter
Big Country

Posted by BigCountryExpat at 9:52 PM