Greetings Me Droogs N Droogettes!
So a lot of comments about the story about what Beans called a "Swampdonkey" which honestly, first time I've heard that term and I literally LOL'd my ass off.  That's -fucking - great.  An absolutely accurate definition of one of them big dumb foul smelling motherfuckers.  Moose... sweet God-in-Heaven... not the brightest of critters, but definitely one of the more 'pungent'.
Sort of like Dumbunny...
Oops, did that come out?  Sorry...
Now, All of this had me reminiscing.  'Specially since someone I think Coelacanth reminded me of Elk and Elk jerky specifically.  That kicked Ye Olde Memory Banks on, and Pinged ANOTHER (to me) hilarious couple of stories about some of the characters I served with over the years.  In particular, aboot ye olde Elk chow, there was one dude...  This one guy?  Right out of central casting, filed under "hardcore backwoodsman, anti-authoritarian, type one each"
Now, for sanity's sake, I'll leave his nickname as it was.  His IRL is known, but we all called him "Buzz".  Buzz was an older dude to most of us... in his mid thirties.  Now, figure MOST younger E-5 and below, the lower enlisted are all between 17 to 24... it was odd to see a E-4 over 25 in any fashion.  Buzz was like 32, maybe 34? and considered the "Old Man" of us lower enlisted.  He was an E-4 like me.  Originally from Montana, borne and raised.  Raised waaaay in the outer wildlands if you will.  His ancestors were part of the Great Western Migration, and settled waaaaaaaaaay out yonder so to speak.  Think IRL "Marlboro Man" 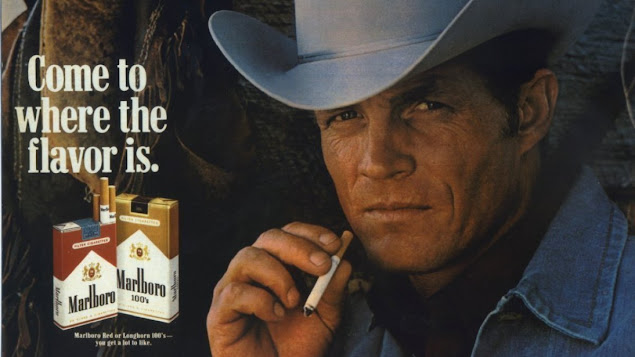 Subtract the Cowboy Hat, but leave the grizzled visage, and add a military haircut, and you got Buzz to a "T".  He was also a great guy... literally no one ever had a beef with him.  Which in itself was unusual, as there's always a beef in an Infantry Platoon...  Even the handful of Blacks we had (yes, Blacks... Infantrymen generally are a higher caliber folk, and I don't think I ever met a nigger Grunt... most of the niggers were supply or 'other'... Jes' Sayin') got along great with Buzz, though they'd bust his chops for his laconic way of speaking... very measured and slow, with a thick accent... not quite true southern... more 'mid-western' slow.
So, anyways, we were stationed in Germany, as mentioned before, I and he, we if you will were/was in the OPFOR in Hohenfels, and Buzz was a source of great humor and amusement.  The invariable conversations during stretches between "combat" would lead to lengthy conversations of "Why'd you join (the Army)?" to which he'd explained to us that he wanted to "See the world" after spending years living Grizzly Adams Style IRL in the mountains...  Yeah, Ole Buzz was an honest-to-Gawd Mountain Man.  Graduated High School, and 3 of his best friend and himself packed up, kicked civilization and "Da Rulez" to the curb, and went out to live in "God's Country" to live or die by their own means.
Damn
Too fucking cool Aye?
First few years he reckoned, they made good cash growing weed and poaching.  Great times of summers, casually fly fishing (illegally) and dodging as he called the "Them Damned Fish Fuzz", i.e. the Fish and Game folks who'd dare to go out 'yonder' to their stomping grounds...from what he said, the Federales and locals left them alone for the most part, as they were doing real-time 'subsistence existence' rather than extreme profit hunting/poaching.  I mean they did, but not so much as to raise the ire of Leviathan... BUT...  As time went on though, the rest of his bros got tired of looooooooong cooooooooooold winters in a handmade log cabin, and eventually went back to 'real life'.
So, after spend a lonely solo winter cooped up, Buzz packed his ruck and rifle, and made his way to a Widow who he was somewhat intimately acquainted with, dropped off all his gear with her, and ended up at a recruiting station to "...expand what I saw of the world, and my experiences."  That's almost a direct quote.
SO... Cut to like 3 years later, one year of Bullshit at Benning, followed by his tour in Germany, and all of a sudden, Battalion, (who never gave us time off nor leave unless it was a fambly emergency) started to get really closely inspected by the I.G. i.e. The Inspector General... seems we had a lot of dudes, including Buzz who hadn't taken -any- leave in like two years, and were about to lose that accrued leave.
Now for the civvies there, as a Army Grunt, well ALL Army folks, you get 30 days paid leave a year.  Now, depending on how fucked up your chain of command is, they'll make any and all excuses why you can't go on leave because it affects staffing, mobility... all sorts of shit... shitty commanders LOVE to deny any and all leave, if only to be fucking douchebags.  IF they find out someone 'lost leave' them man, heads were gonna roll.... 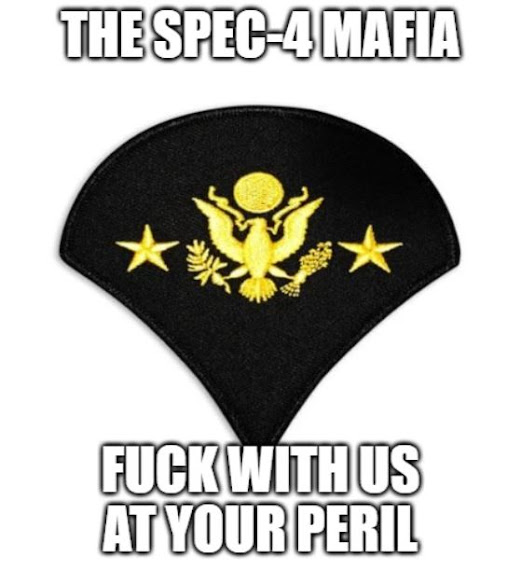 Posted by BigCountryExpat at 1:00 AM