Greetings Me Droogs N Droogettes!
Wifey blasted me out of the fart sack at oh-early, leastways for my currently 'on vacation' ass it was early, pre-0900.  Before it was being a 'worthless unemployed ass' that slept in, then since Glorious New Tractor Factory Job, now until the start date is my 'vacation.'
Get to fuck off until Tuesday.  Theoretically.  More like reality?  Had to do mucho work-o on the Putt-Putt.  Dead battery: $173.00... WITH the Black Friday 25% off.  Sheesh.  Then?  New Sneakers for the Putt-Putt.  Those I -did- get a deal on, $375 for 4, balanced and mounted AND the old ones disposed of.
I'm waiting on the call to go pick it up.  Normally I ride on tires til they're like at the threadbare stage.  This time, I went out and 'poked' at the sidewalls, which cracked under my thumbnail... seems the dry rot is a bit more advanced than I'd expected... what the hell... it -was- given to me as a gift... I just didn't know that the tires on it were original equipment.  Like 1999.
So, deep dive in debt.  Any donations BTW that y'all have done, Mad Gratefully Thankful for.  God knows this job/no job/job/no job...  This one is costing though for the startup as the HQ that I have to go to training at is waaaaaaaaay down in Fort Myers and it's a three day-two night hotel stay, that I had to pay for out of pocket, with promises of reimbursement.  We shall see.  I have to drive down there... it's gonna be questionable whether or not I can get it registered on time for the trip, as I can't have Wifey without wheels with NewGrand in the house.  3 days of no wheels is no go.  Issue is getting into the DMV on Monday AND having the $400 to pay for it.
So, anyways
Let's cut back to some observations we got as this year is closing out.  Couple of the Biggest ones are the NottaVaxx Question, vis-a-vis the insane amount of previously healthy athletes -suddenly and unexpectedly- suffering grave and almost fatal heart conditions where before, there was never any issues? 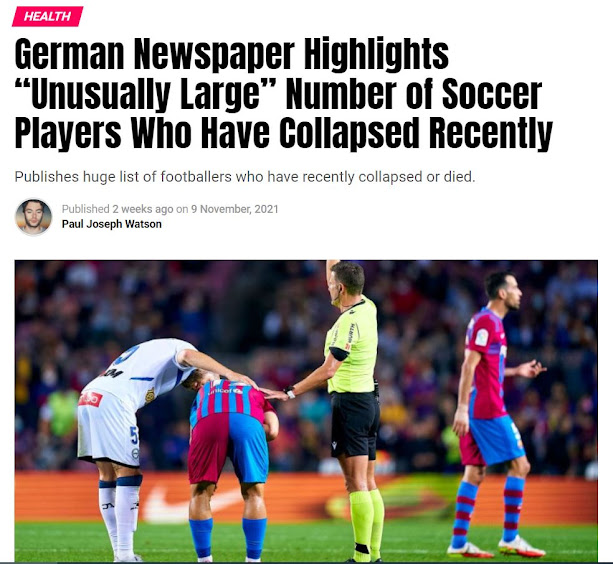 Now, European "Football" as they call it... they jabbed early, and jabbed hard.  Ladi-dadi-every-fuckin'-body got the jab as the FIFA is like a huge moneymaker...  problem is now?  Lotsa prime players are dropping out, falling out and/or dying from 'heart and chest issues' where there weren't none before a'tall.  Link to ONE story HERE: https://www.zerohedge.com/medical/another-professional-soccer-player-suddenly-collapses-middle-game

Now, if you've ever BEEN to a real-time European Soccer game, us 'Muricans find it sorta D&B.. dull and boring.  The problem is that man, let me tell you... to be a pro-soccer player, you gotta be in unbelievable shape to haul your carcass over  the acres and acres of a soccer pitch.  I get chest pains just thinking about all that running
And now?  These guys, the pros who've never had -any- issues before are 'suddenly all developing' "heart conditions?"  I wonder what might have changed over the past year or so to cause that to happen?
Guess we'll never know Aye?
Same goes for ALL the spikes in 'unexpected dead motherfuckers' this year.  If I were an Insurance Actuarial, I'd be all sorts of out of shape over the numbers for 2021... like we're at a 20% increase of dead folks in ranges where we normally don't have that many dead folks... and these are not COVID related deaths... no no... again, they have no idea why there's a sudden and unexpected jump in the
numbers of folks who've unexpectedly cashed in...  it's almost like there may or may not be some commonality involved... but Aye... what do I know?
Then next fun filled balloon-o-poo... The Glorious and Harmonious P&PBUH (Plus 10%) Orifice of The (p)Resident, The Dementor-in-Chief, Emperor Poopypants the First, Chief Executive of the Kidsmeller Pursuivant, Good Ole Slo Xi-Den went in to the MedShed for a Colonoscopy... (probably looking for his brain).  The Sawbones in Charge released a 6 page medical report that was literally a puffed-up-piece of Bullshit.  LOTS of "Oh his asshole was fine and there was a teeny benign lump but other than that, he's fine."...  Like nothing vis-a-vis the fact that he's becoming a shambling corpse right out of the "Walking Dead"  Motherfucker wanders around clueless... not a mention of his mental acuity, which the enemedia demanded of OrangeManBad...  and now our media?  The Ministry of Propaganda and Lies?
It's well past the time we should have started shewtin' them motherfuckers.
But as it was said before by William T Sherman (a great War Criminal in his own right) "If I had my choice I would kill every reporter in the world, but I am sure we would be getting reports from Hell before breakfast."  In fact, THATS the marker I'm watching for... Not some Fed getting capped... not some persecutor or Judge... Nope... the press.  They're soft targets and aren't even aware of it.  In fact I was disappointed to find out Don Lemon was in town and I didn't hear about it.  I could have easily orchestrated a 'bump into him' at a bar and then let nature take it's course, as in be beating his fucking head into his shoulderblades while screaming how "He groped me!!!"  That'd be fun
Same with watching Tater Stelter swing from a branch outside his home.
Fuck those people.  When they start showing up with a serious case of the deads, that means "it" may have just begun.  After all, killing a reporter we've seen, besides the kvetching and screaming?  It's only murder.  No "special enhancements" as it were.  Though watch as soon as the first Major Talking Head gets literally removed with a .338 Lapua Magnum live on air, you can bet yer bottom dolla that the Feds'll try to jump in on the "Journalism Protection Act" which will make them the de-facto Protected Propaganda Arm instead of the current dejure.
Please go ahead.  It only helps then to prove to 'normies' that you're a Dick-Tater-Shit.
Keep pushing and eventually, they'll overreach.  As I've stated before, there's only so many cops to go around and the cops???  The smart ones will bail and bolt from the scene as soon as they realize they're on the lists.  Last thing we want to do is make war on Police...  BUT:
Look at Australia:  It's becoming the true dystopian nightmare that you see in movies.  The reports coming out of the Camps there are truly horrific, and it's readily apparent that the Gestapo Effect is in Full Measure there, as in "I'm only following orders!"  Beatings, intimidation... acting like the Praetorian Bully Boys with Badges?  That shit... as long as we got the weaponry, it (hopefully) won't happen here.  In fact, the very fact that the Fuzz have been under near-constant attack by ALL of the Left, I don't see them playing along much longer... More of a "Fuck you, I quit."  Especially if they're given orders that're blatantly wrong and false.  I would hope leastways.
But, as I said, things are in free fall.
We don't know when or where the bottom is coming.  I do know without a doubt that the whole "COVID-Nu" out of Botswana?  Bunchabullshytte there Aye?  How many more weeks to flatten the curve you lying fucks?  Gah... I need a belt-fed.  That's one of the projects I want to work on... an MG-39 or 42/44 belt fed in .308/7.62... juuuuust to see if'n I could do it.  The kits are out there... the parts all over the place.  Problem is $$$ as I can't afford to tell the time these days.
Oh well... man has to have a dream Aye?
So, More Later I Remain The Intrepid Reporter
Big Country 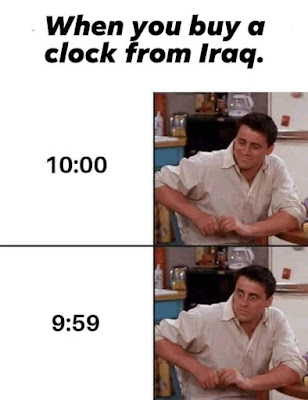 Posted by BigCountryExpat at 4:32 PM