Greetings Me Droogs N Droogettes!
Sit back, crack yerself a cold one, and have a few on hand, as this here is going to be a bit of a 'rabbit hole' that we're going to try and abseil down.  Bigger than yer Mom's hole no less.
Jes' Sayin' 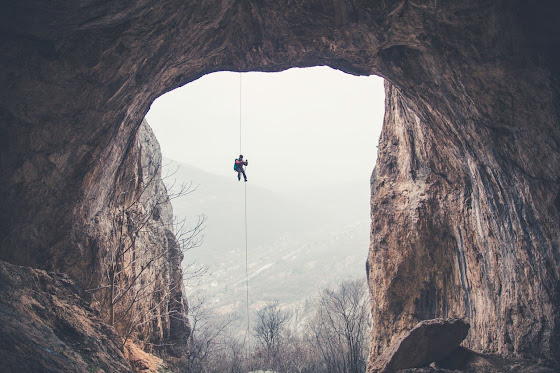 I've spent the past few days on the road, and when I could I did a LOT of reading of the various bleggs and whatnot.  Had to watch a lot of shitty TV too.  Stories from the news, the fake and ghey news and Globohomocorporate bullshit that's spewing out all over the place like an out-of-control volcano in the Canaries.  It's truly apparent that the Ministry of Propaganda and Lies have been ordered to drum up a couple of things and get the 'programming' of the Joe Sixpacks out there rolling at full speed.
One is on the Boob Tube.  That fucking thing?  Massive pushing of the Gay Agenda as to the point that I hardly saw -any- 'straight' cishet couples EXCEPT for the race-mixing ones.  ALL the commercials mind you.  Not a single. 'normal'. couple anywhere.  I think the only straight whypeepo couples I saw in commercials were ALL olderish to ancient Boomers in medication and insurance ads.  ZERO normal folks.  The ads for Match dot com were probably the most startling, as they pretty much feature Black Lesbians in ALL of the commercials.  Which to me is -hysterical- because according to the Black Futures Lab Census of 2019 (a major black only census) which can be viewed here: https://blackcensus.org/wp-content/uploads/2019/06/When-The-Rainbow-Is-Not-Enough.pdf 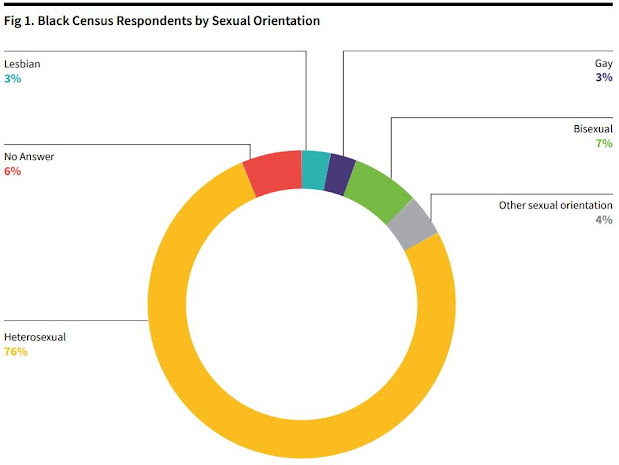 Only 3% of all blacks are lesbian!
Considering that blacks only make up 13% of the overall population...
Talk about your -narrow- demographic.
I do know that after seeing something like this, the object as seen in Stonetoss sooooo many times... 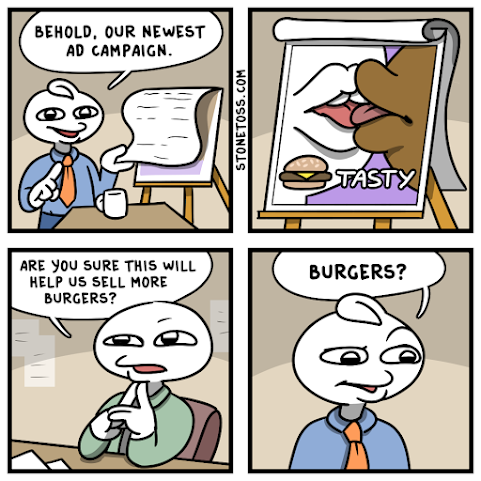 ...it isn't to get more people to use Match dot coms services but to either 'program' people to see degeneracy as normal, (for their demented values of normal) and to offend the rest of the population into a state of abject horror/disgust/demoralization.
What they -don't- understand though is the underlying nature of man.  Most of the ad execs have never been punched in the fucking face and it shows.  They think that 'fighting' is done in a board room, whisper campaigns, backstabbing and undercutting a dude to jockey for the "C" Suite...   They've never been genuinely threatened.  This sort of constant 'harangue' grows tiresome.  Eventually they'll learn.
In fact, make it a priority to find out who the ad execs are.
They live -somewhere- and are soft targets
Jes' Sayin'
Then, moving on, I found it fascinating that "Q" is still being 'pushed'? or mentioned on the regular by all the fake and ghey politicos, Media propagandists and well, all the empty headed retards out there who actually believed in that heaping slag-pile of shytte.  Now, in all transparency, I initially believed the whole weird aspect initially, until I started seeing a pattern.  It was enough to see it with utter clarity when this asshole who calls himself "Neon Revolt" on Gab started his web page with a day-by-day breakdown of the Q releases and his website as well.  Sapper went all in and bought his book (for like $30? or something, bit steep for my money IMO)  When he got the book, it was an incredibly heavy, small print tome of insanity.  Unbelievably well made and done, expensive paper... lots of infobits... and that right there was the problem.
Exceptional production values on a conspiracy book about a at-the-time questionable 'source' in the socio-political arena?  Written/compiled by some rando who claimed that he was self publishing it?  Something didn't 'ring true' about it so I asked Neon Revolt on Gab about my suspicions, where I was immediately blocked AND muted by him.  Still am too.  My beef was that MY sources were telling me it was bullshit.  Lotsa eye rolls when I asked them and "I thought you were smarter than that."  Like lifetime members of the "Spook Club" telling me this...
So yeah, Neon Revolting is a grifter and scam artist, more than likely controlling opposition.  Keep the low IQ bottom feeder normies who like to talk conspiracy theories busy, so busy that they're not out protesting, planning nor being cannon fodder.  In fact to me, its very telling that good ole Neon is now pushing some serious crypto stuff.  I see his shit from repoasts of people I follow...

That right there tells me that "they" (for the values of who's controlling him) want to have people stuffing all their spare income into crypto, which to me is even MOR bullshit than the stonks.  Literally a fake and ghey bullshit money.  No power = No monies, no matter the how where and why... hell ALL currency, unless you have -actual- physical, be it paper, gold, silver, trade goods... IF the power goes out, or maybe even -when- it goes out, this here Hi-Speed Low-Drag PC I'm currently pecking this here out on becomes a large paperweight amiright?  Putting 'real' (for the values of real) money into a completely imaginary and made up 'bitcoin' or crypto?
Better off taking a stack of $20s and lighting it on fire, then typing into your computer that you have
$100,000,000,000,000,000,000.00 worth of invested "Shyttecoyn".  Huh... I like that... "Shyttecoyn"... anyone want to invest their cash with me, I'll send you a certified gen-you-wine "Shyytecoyn" certificate with it's value printed on it... let me know Aye?
'Cos that's about all crypto is worth.
Back to Q though.  It was a purely control-opposition mission.  Don't forget "Anonymous" pretty much disappeared during the whole Orangeman Bad timeframe. 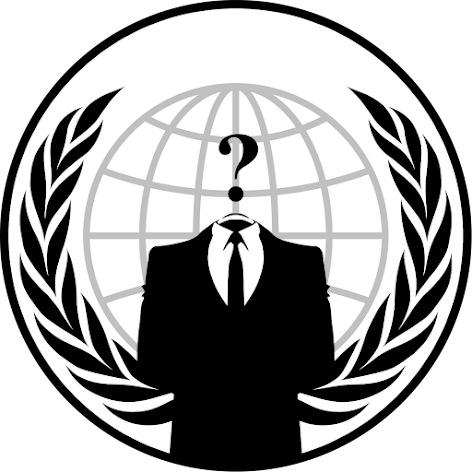 Anonymous is supposedly still out there.
I think it was another Op that was done during the Bush-Obamamessiah Years.  Keep the Big Head Autists busy so's they don't really start fucking up the works and messing with the DotGov and others.  Call it the Globohomocorporate Controlled Opposition.  Anonymous, Q... what's next?  The very fact that the Ministry of Propaganda and Lies is still referencing Q, and that some retards are still buying into it, tells me that they'll have to come up[ with something soon, lest the Big Head Autists start getting antsy.
Just the other day the supposed "resurrection" of JFK Jr. was supposedly attended because "Q" said he's been in hiding, and was going to come out and clean house.  Telling you, these Spongebrain Squareheads... I wish I had followers that gullible.  "Hey goyim, gives me shekels!"  Sheesh.
And now?  Supposedly we're also "on the precipice" of War with Russia, the Ukraine, Belarus, Poland... man... what the fuck?  Seems the Ministry of Propaganda and Lies is reaaaally hyping the WAR WAR WAR drums right now.  Tends to make a bit nervous making Aye?  Fuck it.
If Putin wanted to take over the Ukraine, he would have already.  He doesn't though.  It's a shithole economic basket case that's in even worse shape than we are monetarily speaking.  Massive unemployment, massive political unrest, a minor civil war with the separatists who're MOR Russian than Ukrainian.  My only question is what the hell do we have to gain/win from getting involved?
Answer:  Not one fucking thing.
No oil to speak of.  No land worth keeping. There literally is a big fat ZILCH in the middle of the area, and spare me any bullshit about alliances or NATO.  This shytte is being kept up just in case Leviathan needs to wag a dog somewhere to distract the Normies.  It's all bullshit and I wouldn't fucking doubt that that recent COP26 meeting of the Elites was a 'cover' to plan out the next war and get the ball rolling towards some armageddonish bullshit.
Lets face it, the Dicktatershit of the Glorious and Harmonious P&PBUH (Plus 10%) Orifice of The (p)Resident, The Dementor-in-Chief, Emperor Poopypants the First, Chief Executive of the Kidsmeller Pursuivant, Good Ole Slo Xi-Den is hitting a new low.  How low can it go before they have to trigger some major distraction?  Some have posited that Kenosha Kyle will be a trigger, but I'm highly doubtful. 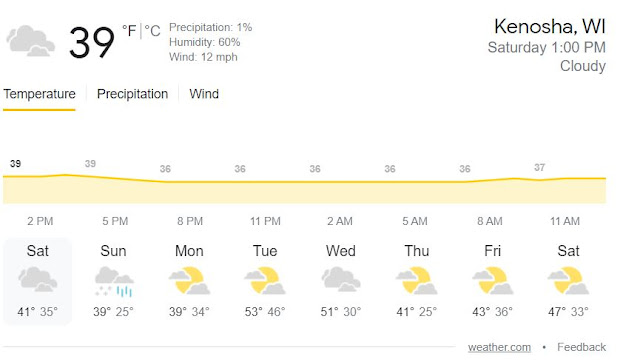 That, that right there.  39 fucking degrees... at 13:00hrs today.  Supposed to climb a bit later in the week, but that right there ain't zigzactly 'wilding weather'.  That's "sit inside and rant at the TV" weather whilst having a cuppa.  Too fucking cold, and the areas that are theoretically warm enough to run riot?  Sheeeeeeeee-it.  Here in Flor-reee!-duh! Desantis said Open Season a ways back, no bag limit on tards.  They're smart enough to stay the fuck away and inside.  But it does also beg a question?
Kenosha Kyle and his "Hat Trick" was essentially a whypeepo capping and killing two Jews and wounding one.  What and why do the niggers give two flying fucks about the outcome of this trial UNLESS they're again being manipulated by their (((true masters)))?  Even though the denial is not just a river in Egypt?  I mean the Number one person in charge of Buying Lots of Mansions... I mean BLM the current actual head man is a Jew... so... does that mean that Shlomo is again utilizing his low-IQ mouthbreathing pavement apes in a chance to fuck over and fuck up whypeepo?
Magic 8 Ball said: 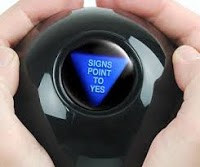 Amazing how it knows Aye?
And at this point, it's becoming a safe bet that even the Goyim now know, much to the chagrin of the (((tribe))).  And they wonder -why- every couple of decades people decide 'enough is enough' and off to the camps/ovens happen.  Even the people who aren't intimately anti-Semitic notice.  I mean I'm actually not.  I just happen to notice all the shady shit that seems to happen when they're involved.  It's just cause and effect... thesis - antithesis.  Just like blacks, despite being sooo much smaller an overall demographic numerically speaking, but actually perform a far greater amount of extremely violent crime than any other race... and when it comes to virulent anti-whypeepo, they, the Jews in general seem to have serious issues BEING actively anti-whytte.
And then they get all upset and nervous, rending garments and kvetching, and then you have to ask:  Why do you need laws passed 'protecting' you from thoughts and harsh criticism UNLESS you're actively doing something that others wouldn't find to be acceptable?
Dunno.
Answer that and we might be able to finally get somewhere.
But yeah that's the crux of it innit?
The who how why and more importantly the when of the 'next move' is what WE as a peepul need to know.  That way when it gets to be 'time to step off the porch' to 'play' we have lists that we can, with 'Teutonic efficiency' get things done and settle accounts quickly.
Head on a Swivel
So Yeah, More Later I Remain The Intrepid Reporter
Big Country 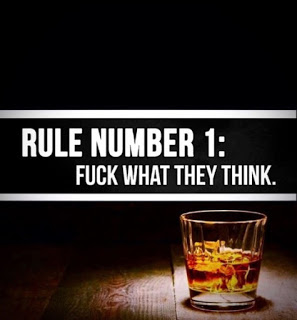 Posted by BigCountryExpat at 2:55 PM