OK Hadda restore from the alternate site:  No hack, just me being stupid  I left another broser open on the OTHER 'puter which I had started dis here Poast, and when I reopened the browser, the autosave, with only ONE paragraph in it overwrote the whole fuggin Thing!!!!" 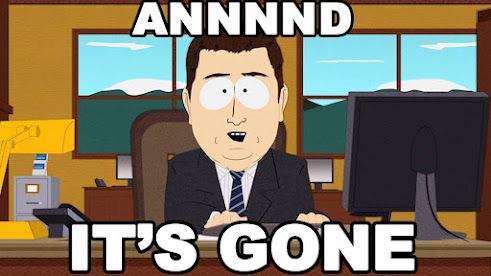 Tech issues amiright...
So, thankfully I have the other site.  Whew.  A lil cut n paste and viola... back in biddness...
For a minute there sheesh...y'all will see why, so, back to the original poast!

Yep.  Dirty Deeds being done to Ye Olde Intrepid Reporter of Fame and Foul Fortune.  Well... mebbe not that foul.  This AM I got up to hit the gym with DumBunny as part of the 'rebuilding' of her and trying to make a better hoo-mon out of her.  She needs the help, so part of that includes PT.

Unfortunately for me I got to the gym and promptly puked my guts up.  Not sure what got the guts up, as I only had my morning pre-workout, and it IS the first time trying it, (new brand) but highly unusual to say the least... normally I don't ralph unless it's bad food.  DumBunny still was a trooper and got her workout on.  So, one day, now to see if she keeps it up.

Then I get home, and start going thru me emails.  As I'm logged into Yahoo my phone asked me if I wanted to log in?  From Georgia...  Uhhhh no.  I'm already logged in.

So, I immediately went and changed my password.  AND check the access security log.  Which I promptly did.  Yup, 'attempted access from Atlanta' which don't mean shytte, but still.... When I got back to the 'main page' of Yahoo, I see an email:

My Two-Step (phone) Account Key was deactivated?
Shit...
So, quickly, went in and re-activated it.
And when I got back, said email was no longer in the inbox.

So, a quick look in Ye Olde Trash and yup... sure enough there it was.  Now mind you I -did not- do this.  So I moved it BACK to the inbox.  >Le Sigh<  Which means I did not more n'likely stop the full-on fuckery.  No idea the reason why they hit THAT particular email as it's one of my oldest and least used.  More like a spam-collector... the only thing I can think of is is someone from Blab... i.e. Gab.

I registered there looooong ago.  And I was in a major flame-roast last night for a while.  Hilariously toasting some J21s on there and being a general eeeeee-vil whypeepo antisemite nahtzee superpreemiecyst for fun... loads of fun, especially when you can tell the butthurt is happening... key to that is having fun while flaming... sometimes the insults just get too funny and all you can do is LOL.  Taking it and yourself too seriously is the route to fucktardation and uber trolling...

Might be someone got overly butthurt.  Not sure.  Don't think is was a Fedboi-Glownig, as the tracks were sooooo amatuer.  Like MAD amatuer hour shytte.  Way too obvious, and whoever doing the intrusion should have bailed the SECOND they realized that I was in there at the same time... which then begs the question of what they were soooo determined to get in for?

Oh well.  Pretty obvious they were there.  I'm covered. Lotsa Tracks and whatnot.

Unless they were looking for pis of dis here:

She doesn't know what to make of me yet, or the other animals here in the House.  She seems to really dig Stella-the-Sausage Queen and the cats confuse her.  I had to go out and get a high chair 'cos Bebe#1's was all beat in (we bought it used from a 'gently used' kids store) and then I also had to get a springing bouncy seat 'cod Bebe#2 seems to have 'ants in the pants'.... she only stops moving when she's eating or sleeping.  That had to be brand-new 'cos I don't trust springs and/or toys like that to be used... safety first!  Thankfully, unlike Bebe#1, this one seems to have some "Spanish Siesta Blood" or something going on 'cos she loves her nap times.  AND added bonus:  Sleeps through the night nicely and even sleeps in until about 0730-0800!

Yow!  No oh-dark-early wakeups?  Sign me up for MOR!

Little differences from her older sister... this one has darker skin, hair and brown eyes.  Y'all have seem Bebe#1... whytte-whytte skin, redhead and greeeeeeeeen eyeballz.  One is "Speedy Gonzalez" while the younger is more "Slopoke Rodriguez"... (Love me some Looney Tunes!)  Going to be -interesting- to say the least as they grow up when we finally allow the reunion to happen.

'Cos thats the main issue.  We're keeping DumBunny and Bebe#1 separated for quite a spell, 'cos she ain't earned the privilege of interacting.  Yet.  The very last thing I will allow is for Bebe#1 to be hurt again by her momma.  She's already shown some seperation issues and anger at not having Mama and Dada around, and we've been traipsing through an emotional minefield as we don't want permanent damage to happen Aye?  Kids are resilient, BUT I ain't letting anyone anywhere anytime hurt her.  I know, I know, eventually some boy is going to, but even by then, at 75-80?  My eyes may be fritzed out by then, but By God thats what Wide-Bore Shotguns are for by gum!  8 Gauge anyone?  Or mebbe a 'flock gun' also known as a 'punt gun'...  That'll make aiming UberEasy.

We'll take it per usual, one day at a time, Trust in the Lord and Pass the Ammunition.

BTW, before I bail:  Good call on the Hydra-matic being a repro everyone who commented.  Yah, NoDakSpud makes a bunch of 'classic' AR pieces that are 'period correct but legal' (as in not full auto or convertable) with correct colors, which can vary from light gray, to the darker almost-black.  As well as unique manufacturing marks like the Hydra-matic in the last poast Great stuff...

So, enuff for now
Head on a Swivel
Watch out for Stobor
More Later I Remain The Intrepid Reporter
Big Country