Greetings Me Droogs N Droogettes!
It's too early for all this... didn't sleep good again for whatever reason.  Then the day started by racing to Publix for cat food... seems Ye Olde Kittahs went and ate theyselves out of food.  I also have my suspicions about the doggo... she's looking might sus when I look at the apparently licked-clean-cat bowl and then her... she gets that sideways guilty look going like "I have absolutely NO idea why that cat dish is completely and utterly crumbless!" 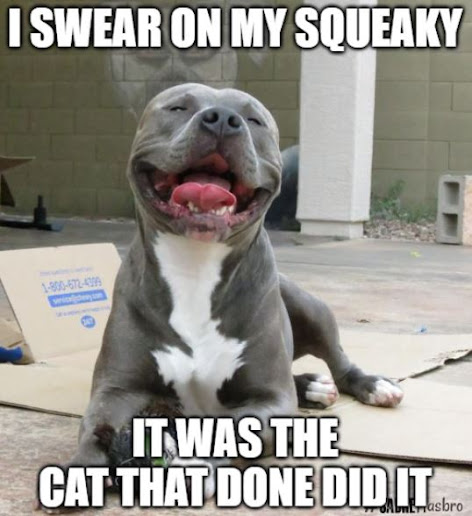 So, besides the fun there, I got heated reading an article on ZeroHedge.  It was pretty pertinent to the INSANITY of the world today.  The article is located here:

https://www.zerohedge.com/political/brandon-smith-if-you-dont-respect-my-freedoms-i-dont-respect-your-pronouns
The TL;DR is this:  For millenia Humanity, as a species, would see insanity/mental illness and whatnot as not a good thing.  It was considered aberrant.  An outlier to be avoided.  History is littered with the stories of the Madness of leaders who eventually were removed due directly to their actions they performed because they were fucking cracked.
And now?  We embrace and elevate these fucking psychos as 'better' and 'more worthy' than the rest of us common folks... that because we naturally, on an instinctual level know that "that person ain't right!" are castigated and declared that, per the article:

"The insane are now above the rest of us. The insane must be worshiped. The insane are our leaders and role models. Biology is wrong, and the cultural Marxists and woke ideologues are right.

The new narrative is that truth tellers and rational people are the “insane” ones and they should be watched or possibly locked up."
And, more frighteningly, that the truth tellers and rational people need re-education and/or elimination because our 'badthink' causes 'hurt feeewings'.
Now Smith breaks it down to the reason it's sooooo hyped right now, and that's that Whypeepo, being on the 'outs' and targeted for the "Original Sin" of just being a Whypeepo, are embracing this shytte as it gives them the cachet of now being in a special and protected if not outright better class of people.  Now, just to continue, it's not like anyone is ackchully going out and actively hunting down trans folks... if anything, people have gone to literally insane lengths to coddle these people.  Like going waaay the fuck out of their way to use their fucking fucked up pronouns and whatever... My big question is since when do YOUR feelings matter one fucking iota to me? 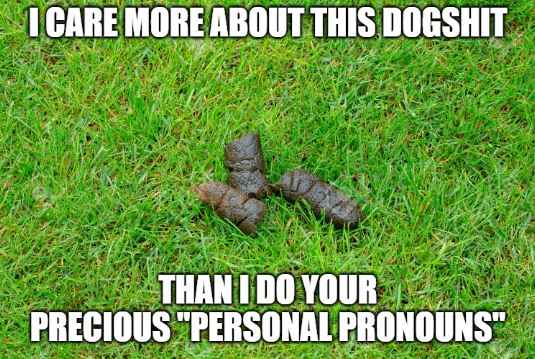 The past 100 years, we finally started helping the mentally ill... for like the first time ever, we tried to help.  For the first time in history of humanity, we have the means (chemistry) and ways to attempt to assist those unfortunates who's elevator doesn't go all the way to the top so to speak.
And now?  here we are, at the Apex of it all, and we're regressing like a motherfucker.  Look.  I have compassion for these folks.  MY very own fambly has been severely negatively impacted by this whole fucking nutjobfestivus.  I've been upfront about it... I actually blame Bruce Fuckhead Piece of Shit Please Die In A Fire Jenner.
Why him?
Before, "Transgender" was rare and uncommon.
I can tell you right now what the issue is with that fucktard.  See, BJ as I'll call him here for brevity, as what I want to call him is DeadMeat.  BJ... if you remember, he was "The Man" in the late 70's and 80's.  The male Paris Hilton if you will... everywhere he went, it was "Hey There's BJ!!!" and the paparazzi followed him, he was allll over the Enquirer... constant attention.  And that's what he craved.

Attention
When he FINALLY settled down, it was HUGE Hollyweird News... Marrying the Widow of Robert Kardashian, OJ's Lawyer, finally putting all those whispers about his questionable sexuality and whatnot?  Kris Jenner, Momanager Extraordinaire?  Well... everything was fine and dandy... Until BJ started sloooowly sliiiiiding out of the Limelight.  Kim "Drinks Piss" Eldest Stepdaughter sex tape came out, (rumored to have been released by her Mom... sick fucks Aye?) and then the whole "Keeping up with the Kardashians" and bullshit, alll the other kids taking over?  BJ became a bit-player in what HE thought was 'his show'.
So, what to do?  Well, a headline grabbing "Put on Drag and Declare hisself Transgender" seems to have worked out rather well didn't it?  Except for 'collateral damage' which has, as far as I can tell, been catastrophic as well as had an enormous negative impact both numerically and spiritually... the sheer numbers of kids who now identify as "Trans" is staggering compared to 'legit' numbers...we're going to be feeling the fallout of this fucking attention-whoring asshole for the next 10-30 years... hell, how do you know it's a ploy? Fucker still ain't cut off his cock....
The Collateral Damage? Especially bad since the mentally ill "Munchausen Mothers" who proudly jumped on board when they realized that they too could declare that their 14 month old boy, because he played with a barbie doll is now "Trans" and going to be allowed to 'transition' as soon as viable.  MAD Attention Whoring!!! OMFG!!!  Those bitches?  Take the kids.  Sorry, you're insane.  Dangerous even.  You do NOT have the right to fucking essentially destroy your kids future because you like the 'attention' and 'social status' you crave.  Fuck. Them. Whores.
And for any 'haters' out there?  My gay daughter went "trans" because essentially she was a 15 year old girl, uncomfortable with BEING a 15 year old girl (female 'things' grossed her out, and many a time she was jealous that men don't have those 'things') and being gay wasn't good enough socially.  The 'feeding the attention and drama hamsters' contributed to her -suddenly- declaring herself "Trans" and when I spoke up?  Yeah... I wanted her to get fully evaluated before doing anything too radical.  Wasn't asking much, BUT it contributed significantly to the dissolution of my marriage and family, who ALL went social-justice 'full retard' and encouraged her instead of asking the hard questions.
So, I'm cut off... and it's a shame.  I miss her greatly.
And unfortunately, the numbers of 'post-trans regret' who suicide at middle age are unbelievable.  It's sad and horrifying... according to now-suppressed info (I've studied it in depth) a LOT of the female to males are the worst in raw numbers.  Some of the research is that women naturally have what I call "the baby making switch" in their heads... part instinct, part hormonal, and when the "Babies Rabies" urge hits (Red Pill term) and they've terminally fucked up their bodies and hormones, the "Self Destruct" switch gets thrown...  my worst nightmare really... and such as it is...
"So It Goes"
Billy Pilgrim "The Children's Crusade"
Kurt Vonnegut
One of my favorite books.  The other quote is what was put on Pilgrim's headstone (or what he WANTED on his headstone): "Everything was beautiful, and nothing hurt."
Just about Zen in that Aye?
So, maybe more later, as it's a full day, and I need to check the headlies to see what's going on.
So More Later I Remain The Intrepid Reporter
Big Country 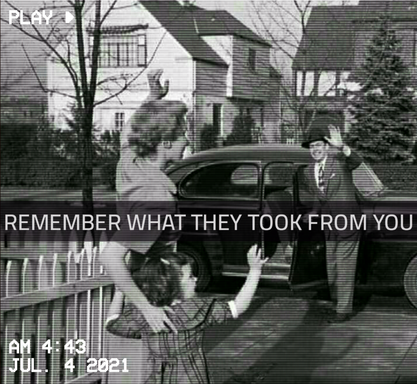 Posted by BigCountryExpat at 1:51 PM