The Baldwin Brewhaha UPDATED at Bottom

Greetings Me Droogs N Droogettes!
Time foir Ye Olde Master-at-Arms and OF Arms break it down like Barney a bit on the whole Alec "Too Bad For Him" Baldwin shewtin.  Lotsa folks burning up ye olde bleggs ALLLLL over da place, and Aesop and Divemedic having a toe-to-toe tet-a-tete over the whole "responsibility" thingy.

Now, Me?  Don't know, don't care.  I know for damned sure that if I'da been 'dood behind the trigger' I'd still be in County waiting to find out if it was negligent homicide or man-2.  Bail?  What is this bail of which you speak?
Sapper did the best summation of the entirety of the shytteshow so far though over on Fecesbook:

Trimmed for OPSEC
Fucking classic.  Now... for the sake of brevity, I'm not going to go into too many details, well ackchully I am.  Fuck it.  MY area of specialization is Da Gunz.  I don't know shit from legal-beagle shit, but I'm hearing a whoooole lot that's s-l-o-w-l-y trickling out about the whole Shitfestivus that went on.
The FACTS of the case that HAVE come out is that some Ukrainian Director of Photography named Halyna Hutchins caught a round fired by Alec "Douchebag" Baldwin.  Also hit was the director Joel Souza.  The "Armorer" was some chick (24 years old) named Hannah Gutierrez-Reed.  Seems she literally was the worst pick for that job, and it looks like a case of PURE Hollyweird Nepotism.  Her dad is some uber-famous "Gun Guy" in the industry, and seems he was trying to bring Daddy's lil girl into the biddness...
Unfortunately, she's a fucking retard.  Retards and guns DO NOT mix well.
So, we still don't know what really happened.  LOTS of conjecture.  There's two lines of thought though as far as 'what kind' of handgun was it.  One poast out there has it as a Colt Dragoon 1862 Black powder pistola. 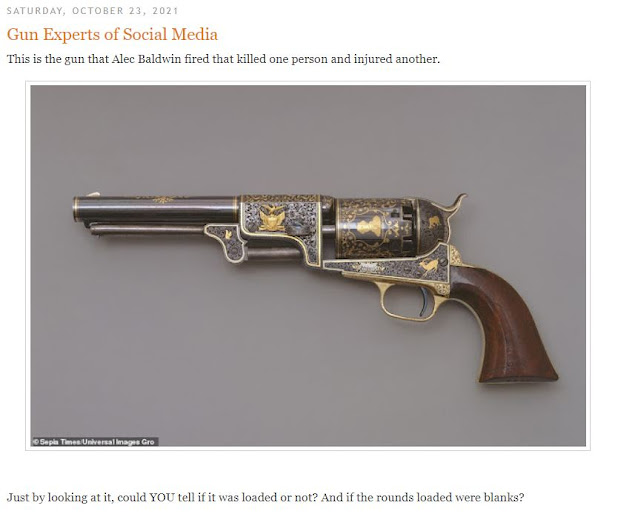 Now, small problemo with this being identified as 'the gun'.
Namely that right there is a presentation Colt Dragoon that is in a museum, as it was given to one of the Czars waaaay back in the old days...  Now, if it was THIS MODEL of weapon, well ok... cool.  The other choice that I've been hearing about is a Colt Peacemaker. 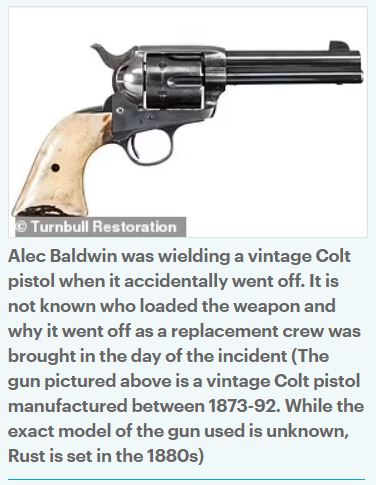 Now TMZ is reporting that the crew on the reg would go shooting live rounds and doing target shooting during 'down time' at this place.  Which IMO is fucking stupid.  BAD Idea to have a mix of biddness and pleasure so to speak.  If you're using weapons in a film you DO NOT want any 'live ammunition' within any proximity to that location.  The odds and chances of something going epically wrong increases to the point... well, we can see right here now aimiright?
My issue is that IF it was a black powder pistola, maaaaan... it's really hard to 'accidentally' load live rounds in that fucker...  Like too many steps.  WAY too many to have this happen as an 'oopsie!'.  As I put it on Aesop's place in the comments, (which I'm going to cut n paste as it was a rather lengthy writeup):
OK... Cap and Ball weapons... LOTS of work to make them loaded with 'live rounds'.. Had me a repro Colt 1864 Dragoon .44 back when I was a kid, when age didn't matter vis-a-vis (leastways New Hampshire) for Blackpowder and Handguns (nominally a handgun you hadda be 21... jes' sayin' Blackpowder was a 'gray area') Anywho...

To Load a LIVE ROUND in the WIQ (Weapon in Question) means it was intentional. One does NOT load a .44 caliber beebee into a Black powder weapon by accident EVVAR

So, unless it was a re-worked 1865+ weapon that fired 'cartridged' ammo, yeah... I'ma leaning towards "intentional"...

Fact is, to load a live round into a black powder pistola takes effort. In sequence:
Unloaded weapon:
1) Pour premeasured powder charge into cylinder. HAS to be pre- measured lest you turn it into "Hand-gre-nuke" by accident.
Literally: "Pour a measured charge into the chamber. Carefully pour a properly measured charge of black powder into the chamber closest to the loading cutout. Repeat for each chamber.
Use an individual powder measure. Do not pour powder from a large powder flask or can.
The exact amount of powder will vary depending on the type of gun.
For a .36, use 12 grains of powder. Never exceed 20 grains.
For a .44, use 20 to 28 grains of powder. Never exceed 35 to 40 grains."

2) Rotate NOW FILLED cylinder to the 'beebee loading point'. Meaning that area where, by the photo shown of the WIQ, is at the absolute six-o'clock of the 'firing chamber' i.e. twelve o'clock zone. That lever UNDER the barrel? That's the Loading area where
Place the ball over a chamber opening. Set a proper size ball or bullet over the opening of the chamber nearest the loading cutout.  The ball should be oversized so that it only rests on top and does not enter.
Make sure that the ball or bullet has been lightly greased before you load it."

3) Now, that lever underneath the barrel? Loading lever. Is used to 'pack' the bullet and round INTO the cylinder... hence why I said, "dis ain't no accy-dent"... Per the online guide of "how to load a black powder pistola": Seat the bowl using the loading lever. Unlatch the loading lever and use it to firmly press the ball down until it sits securely and firmly on the powder.
Apply smooth, even pressure as you do this.
There should be no air in between the powder and ball, but you should not crush the powder as you seat the ball.
Also note that a thin outline of lead will be shaved off the ball as you do this. It should be visible at the opening of the chamber. This is a good sign and and indication that the ball is properly fitted.

4) Now, having done this, it's usually "wash rinse repeat" for the rest of the chambers except 'greasing' the cylinder, meaning covering ALL the loaded chambers to prevent a mass firing of ALL chamber simultaneously. "Apply additional grease. Fill the space above the ball in each cylinder with vegetable grease or bullet lubricant.
The use of grease can prevent "chain firing," or accidental secondary discharges." Reason for this is that BP weapons, esp. pistolas are finicky at best...

Soooooooooooooooo IF they, in fact had a percussion capped weapon (usually .44 caliber) then it's next to impossible to fuck that up, load wise of a LIVE round versus a BLANK 'cos the blank would have stopped at the "powder stage" It takes legitimate effort to load live rounds, AND after it's had the cylinder 'greased' to seal the chambers?  Damned near impossible to tell if it's real or memorex Aye?
As to a 'regular' Colt Peacemaker, whelp... that's simple really... either way it doesn't really matter.  The chick was DRT, and someone IS eventually going to go to jail.  Probably going to be the ditz-o-matic Daddy's Lil Girl... dat fucking broad?  She actually was interviewed a ways back, and stated like that she felt 'uncomfortable' around guns and shit... like OK sugartits, then what in the fuck were you doing there if you think guns are 'iky!?!  Like damn... I'd kill to have a gig as a 'gun guy' making that filthy lucre, and it's becoming apparent that Daddy was pushing her round peg into a square hole so to speak...  24 years old?  Who in the hell would put a box-of-rocks-dumbfuck like that in charge of Da Gunz?  Unreal Aye...

Like I said at the start, Me?  Sapper? You?  Any of us 'lesser mere deplorables?  We'd be rockin' the Orange until they sized up a jury and then flushed our asses down the tubes.  Baldwin should be in cuffs but, as we well know The rule of law is fucking dead in this here Dick-Tater-Shit.  The Attorney General is FAAAR too busy going after righteously pissed off parents for being terrorists than I dunno?  Maybe actually going after legitimate fucking murderous celebutards?  Who -literally- kil't one, and wounded another ON CAMERA?
Go figure.
--------------------------UPDATED------------------------
MOR Intel leaking out from the edges of this fuckfestivus (yes, promoted downwardly from a shitfestivus)  Seems that Ole Fuckstick Balwin WAS fucking around and done found out... Unfortunately not on hisself though.
Pity that Aye?

Word I'm getting now is it was ackchully NOT a BP Bangstick but a Colt Peacemaker and said-fuckstick WAS fucking around...
Seems the Director had called for another take, and according to on-set sources, Baldwin said (jokingly) "Another take?  Why don't I fuckin' just shoot the both of ya?" and then aimed the weapon AT them and squeezed off the round, hence why the Director of Cinematography took the round which kil't her, and it being a .45LC More N Likely That's a BIG BeeBee with some penetration, hence why Director Boy caught the round AFTER it done plugged said chick.
Also it's been mentioned that the Armorer was seen unloading the piece AFTER the shooting (tamper evidence much?) Much fuckery afoot here...  Be interesting to see HOW Much Monays it's going to take to make this 'go away' 'cos that's how the Hollyweird Game is.  What ALSO pisses me off and makes me soooo angry is that Old Alec is turning this into 'his' tragedy... "Boo Hoo! Poor widdle Me!"

NOTHING would please me more.
Douche. 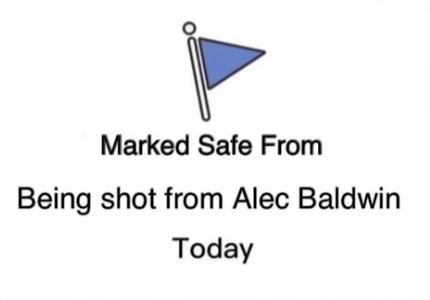 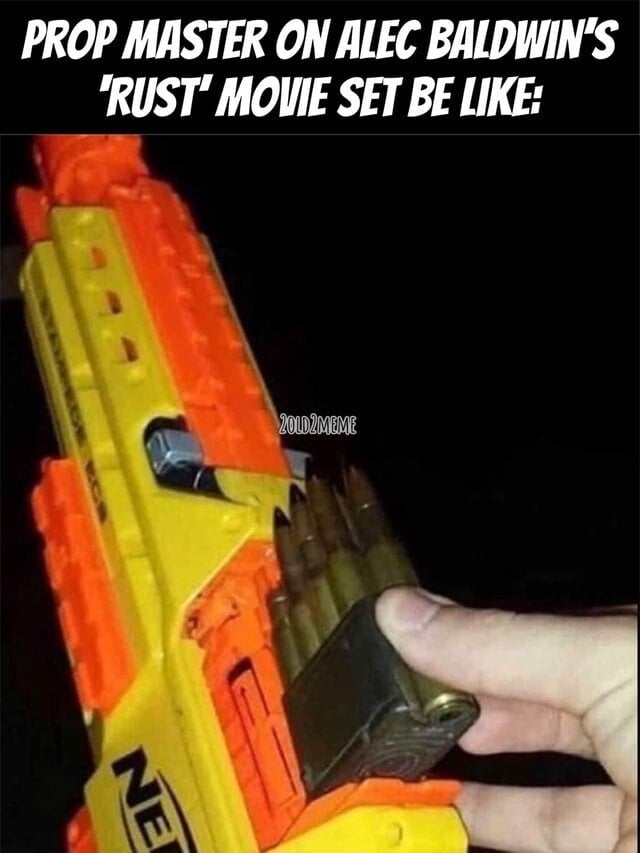 Posted by BigCountryExpat at 3:39 PM