Greetings Me Droogs N Droogettes!
Now, Y'all know I love to run me that Black Aces Tactical Pro 'X' (10?) 12 Gauge. 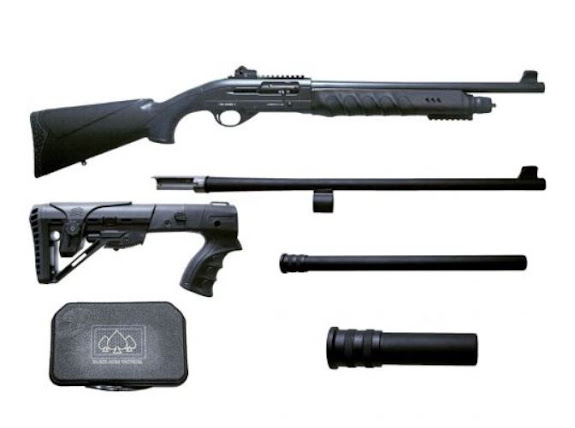 Couple of things... First, I don't get no dimes or shekels for my reviews.
This's all for the 'reg'lar' folks out there who've never been "Gear Queers" and need a bit of assist from a BT-DT guy.  And let me tell ya, Dis Fukkin Shotty?  I wish I had one in Iraq.  VERY versatile.  Can be modded in SO many ways.
It's my 'modern day woobie' to a point.. literally the last, first and last thing I touch as I hit the bed... even AFTER marital issues (i.e. ye olde in-and-out) has been done I always check to make sure the Gauge is where I left it.  So, I'm VERY pleased with it.  AND someone on the other 'House" commented that this model right here is on sale right now at Atlantic?
And I'm broke dammit.
So last night I finally cleaned it.  I wanted to see how dirty it is after 400+ rounds of various 'flavors', to include Buckshot, Bird, Flechette...So I tore it apart.  Now -normally- that's an easy job BUT I modded it out a bit.  The normal loadout, without mag tube extensions is 4, with a 2 round extender or the 6 round extension.  Now, the +6 round tube makes it retardedly loooong.  It's for three gun matches more than anything, to be used in conjunction with the 24' inch barrel.  Now since I'm wanting MORE than 6, but less than 10, (or 7 and 11 if you have a 'round up-the-pipe')
So I found that I could get a Remington 1187 4 Round extension on it. 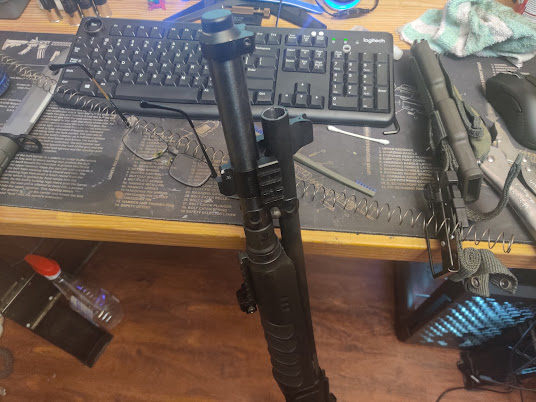 Now, the threading on the mag tube on the Black Aces is, I don't know what it is, but it matches the Remington 4 round tube, see here and here: 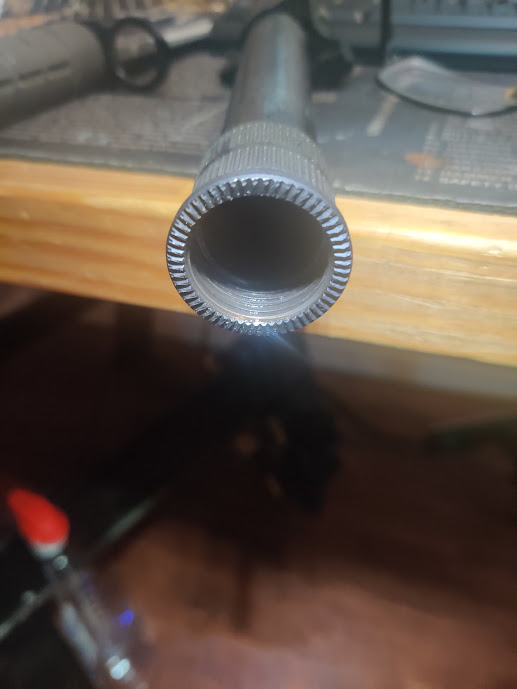 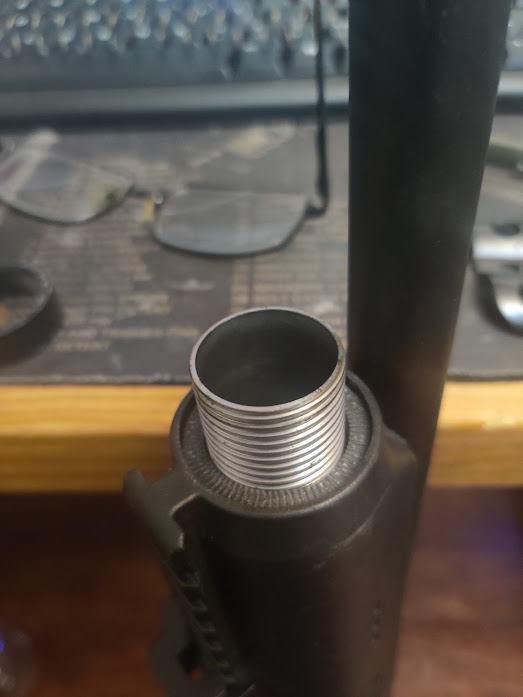 Now, its much longer than the 1187, and when the tube extension is on there, it's used to hold the front forearm in place.  Since there's a difference, I added a spacer to insure a nice tight fit. 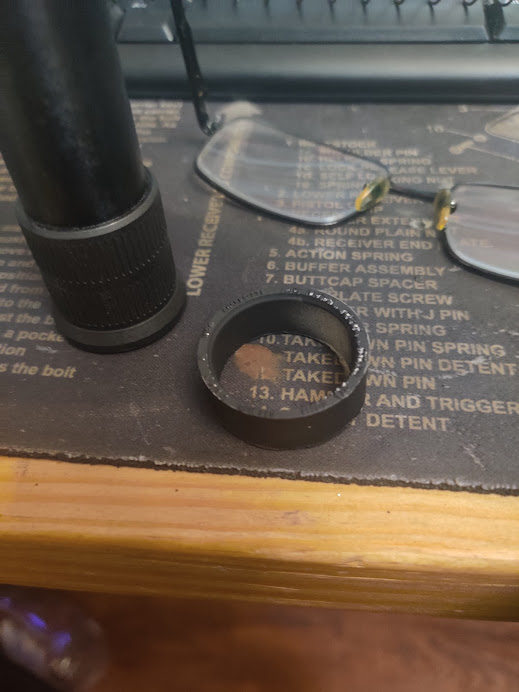 It's a 1 inch interior diameter piece of PVC that I cut and measured, and then hit with Ye Olde Blacke Spraypaint., and installed it.  It's been a perfect fit, and has worked for 400+ rounds without loosening and whatnot...  10 for 10 Would Recommend. 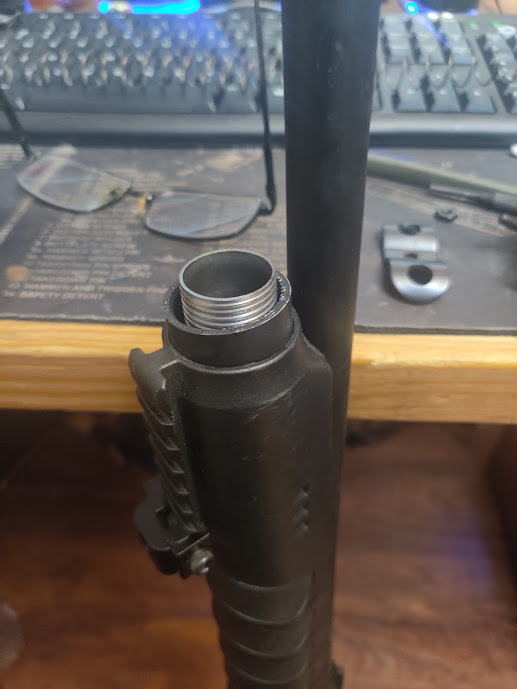 Now, the threading matches, and you do NOT want to overtighten.  That then, once it's on there, I added a few 'other' toys.  One was a Bayonette Lug for my M-9, seen in picture #1.  Which also shows how I fucked up.  I'll repoast it, but can anyone see where I fucked up? 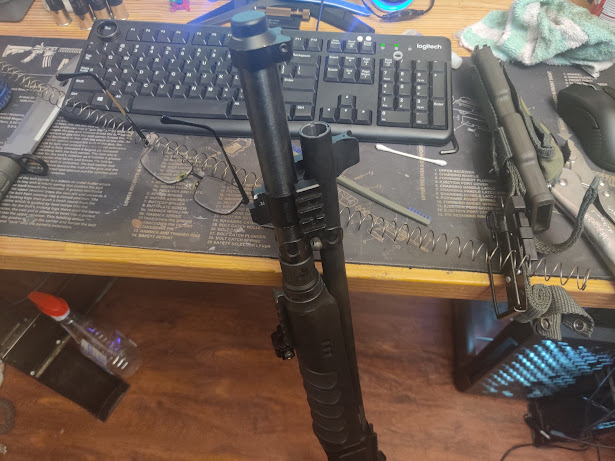 No?
Well, it's right there.  I re-assembled the ENTIRE thing and realized
I forgot the mag spring...
Fucking Brilliant Aye?
Even experts like me can fuck up on occasion.
Had to tear it ALLLLL down all over again... And redo it.  Not a bad thing, but went from a one hour block of cleaning to an additional hour or so for unfucking my fuckup.
But it was worth it. 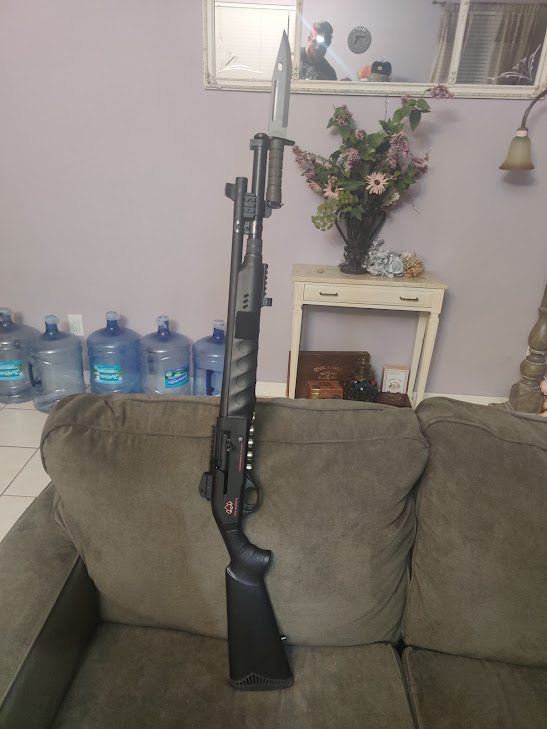 Now, I added a Barrel Brace as well which 'straps' the barrel to the mag tube.  This reinforces it, and adds stability for the pig sticker on the end.  So, in all, I can load 8 rounds up the tube, 1 in the chamber, for a total of 9 rounds, but without it being stupid long.  The tube -does- take a bit of a burn from the firing, but a minor trade for the increase of fire, with an 18 inch Barrel.  As you ca see, WITH the bayonette mounting lug (mounted on the front of the tube and held in place by an Allen screw) it only adds like 4.5 inches out of the front.
A six shot ammo side saddle as you can see rounds it out, and the rear lug also has two small aluminum Picatinny rails that allow me to mount a surefire tac light.
And the Bayonette?  Makes it killer scary to a 'normie'
Unfortunately That's all I got right now, Work is INSANE for a Friday... usually it's more mellow
Sheesh
So More Later I Remain The Intrepid Reporter
Big Country 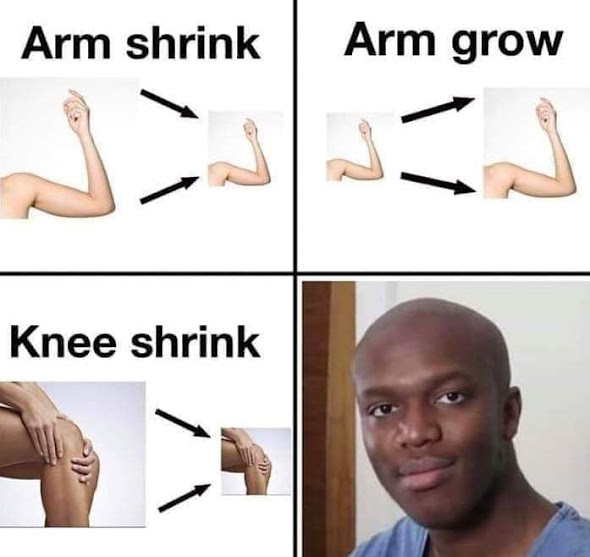 Posted by BigCountryExpat at 4:06 PM