Greetings Me Droogs N Droogettes!
Yannow, sometimes when I see a story, I need to do my screen captures right there and then these days.  Fucking the story about the Texas "Mad Minute" or ten as it's been seen has been completely memory holed on the Goolag.  I googled a bunch of terms, and the only searches and images that come up are from years ago, unsurprisingly from Orangeman Bad Days or earlier. 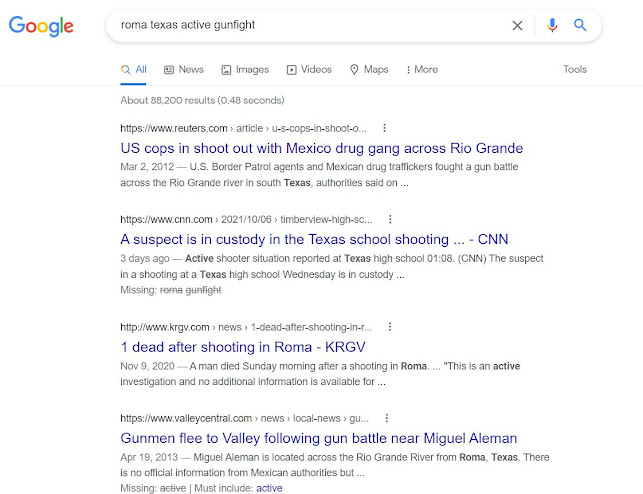 Yep.  Seems a few days ago, the Mexheeecans started throwing rounds across the border.  Michael Yon got a text message about it, and he's been running around over the whole A.O. doing snippet reports.  I'm of two minds with Yon, I purely hate his way of his messages being suuuuuuper short and like broken... it's almost like he's using a radio to report.  Incredibly short, concise, bursts of train-of-thought.  On the other, he's got great intel and skills.  Wish he'd elaborate more.. but, he did share the text message from a buddy of his: 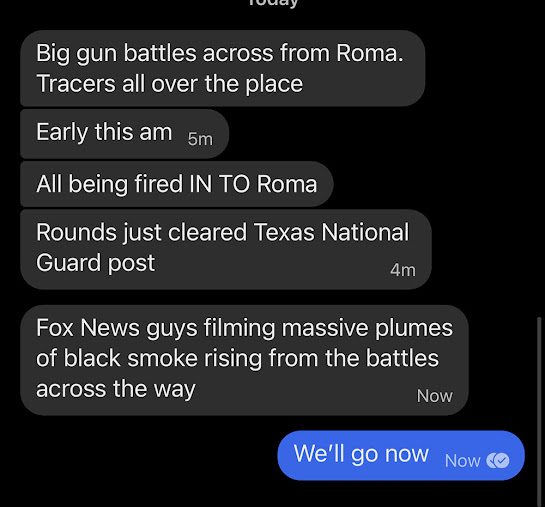 Fox News had a quicky story on it, with some vidya of the tracers flying.  Seems the cartels were throwing live rounds at the Texas National Guard doing observational ops on the border in towers.  Now, I personally did some missions like that in the Reserve.  They sent down us for two weeks from Massachusetts to literally get dropped in the desert, with a radio, in two-to-three man teams, dig a hole, and observe and report.
No ammo of course.
This was in 1993/4?  The reasoning to use us from Mass was we hadn't been compromised or bribed.  The Guard and DotMil of all flavors can only radio and report on movement, which is -supposed- to be relayed to the Border Patrol who does their "cop thang" and 'Book 'em Danno!'  Problem was from my understanding, the Texas Guard had been bought off, and weren't reliable, so that year my Annual Training was twice... Volunteered to sit in the desert for a week with a TOW Thermal and report movement.
Did I mention the whole retarded No Ammo thing?

Yeah.  That's what they said.  Then there's what we did.  I personally had a full loadout AND spares/reloads for all of us.  It was a stone bitch lifting my ruck with all that shit, but I wasn't fucking around.  I had to make it -seem- like it was 'normal weight' lest the Senior folks start questioning why PFC Big Country's ruck tips the scales at 200+ pounds.  (I had a LOT of pogie bait too... couldn't go out without snacks!)
Otherwise it was boooooooooring.
It's also when I found out I love the desert.  My kind of town.
And here I am stuck in swampland.  >Le Sigh<  Not my first choice... Xwife's fambly is/was here, and as you've all heard me bitching in the past, I didn't get much say in picking where I lived... pretty much my whole life.  This time though, when NewInLaws cash their chips?  Maaaan, I'm out, provided there is a country/freedom left for me to move around in Aye?
So The Cartels did this the other night to make the Guard 'go to ground'.  Roma is a major human trafficking point, and used the gunfire to get the observers "off the net."  A few follow up reports said that they did a huge 'push' of people and drugs during this shitfestivus.  Very typical... along with the Ministry of Propaganda's absolute silence on this.
Which brings me to random thought:  IF the Governor of Texas had any balls, he'd throw the Feds out.  Like completely.  Like we're talking full on double-secret-succession.   Couple of things would have to happen.  Whoever the TexGov is, he/she would have to find out who's loyal to Texas and who's loyal to the FedGov.  Then, do the same across ALL state agencies.  Begin a purge of all 'non-hackers' who cannot 'pack the gear' to paraphrase R Lee Ermy.  Do the same to the FedGovFolks as well... they've been living there, they have families and such, then do another "Fort Sumter" on Fort Hood and all the rest of the DotMil.  Confiscate ALL of it from the FedGov for failure to support and defend the State from what is now, IMO a fully hostile military/state sanctioned foreign invasion.
Then deploy the Bradleys and ALL the Tanks to the border.  Tell New Mexico and the surrounding States, "Yer either with us or against us!" and then invade Mexico.  Push at least 10 miles in.  Depopulate/evacuate every living person in that 10 mile buffer zone.  Kill any and all armed men.  What the fuck is Mexico going to do?  Cry to the UN?  What's the fucking UN going to do?  Fort Hood alone has TWO Heavy Armored Division.  Add Fort Bliss which has 1st Armor Division, that3 Heavy Armored Divisions.  That literally could make Texas like the 6th strongest DotMil in the world.  And that's only the Heavy Divisions. 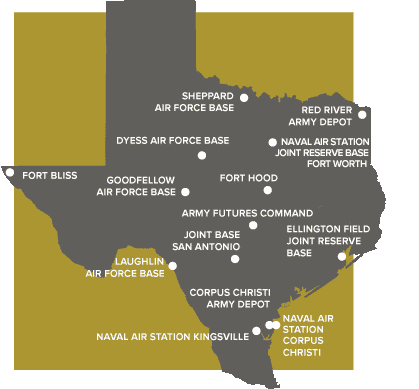 Then, add in the Red River Army Depot and civilian volunteers who'd be MORE than willing to join the cause and get trained up, to man and use that depot storage equipment for The Free State of Texas?  Oh holy shit that'd be a terminal meltdown in DC.  But, currently?  What could they do?  I mean right now our FedGov and Higher-Higher DotMil is literally the most ineffective and incompetent it's ever been since the founding of the country.  Literally. Stupidest. DotGov. Evvar!
They wouldn't do anything, except maybe threaten to nuke Texas, at which point, if they (Texas) sent a division North to 'clean house', ain't literally NOTHING that could stop them outside of a nuke, as well as threatening to nuke your own folks?  Rookie mistake material there... Or what could also happen is they'd scream for 'outside intervention' from the UN and then that's where Joe Chink tries to roll in, but no matter what happens they'd lose.  Period Fucking Dot.  The optics on either threatening to nuke, actually using a nuke OR inviting in Slo Xi-Den's Joe Chink Controllers into the Untied Statz?  Yeah, that'd be about as messy as his depends Aye.  Quite literally shyttey.
Texas quite literally has everything to gain and nothing to lose except the chains tying them to the illegitimate DotGov of the Glorious and Harmonious P&PBUH Orifice of The (p)Resident, The Dementor-in-Chief, Emperor Poopypants the First, Chief Executive of the Kidsmeller Pursuivant, Good Ole Slo Xi-Den.
Again, another great movie/book.
Oh, and the Invasion of Mexico?  Too easy to solve.  Tell the Mexheeecans that you'll be pulling back AFTER that a five mile Demilitarized Zone of Minefields, razorwire and towers are installed permanently.  LOTS of mines.  Hordes of Mines.  Nuclear Area Denial Mines IF you can find 'em.  Backed up by a Quick Reaction Force of Heavies that'll have exceptionally liberal rules of engagement.  Anyone, or anything seen in that area is 'meat for the table'.  No quarter given on ANYTHING or ANYONE now and forever.
Fuck Mexheeeco.  They've been literally blood sucking ticks to the tune of Billions of remittances forever.  And oh yeah, ALL remittances, leastways out of Texas?  Shut the fuck down, now and forevermore.  Anyone who doesn't like it, and thinks it's harsh, man, you ain't see shit yet.  Random thoughts and ideas?  I got a fuckton.  Like how to deal with the cartel and illegals in the country?  Easy.  A 30 grace period.  Get. The. Fuck. Out.  Pack yor shit.  Sell anything you can't take with you.
End of the thirty day grace period?
Issue hunting licenses and bounties.
Put it on Pay-Per-View.
Reinstate the Texas Rangers as the highest law of the land.  Clean out the bureaucrats and "Make Hanging Great Again".  Don't like it?  Fucking leave.  Majority Rule -again-.  NOT the 'Tyranny of the Minority'... you want to be treated 'special'?  Think that biological mentally ill men can get pregnant? Move to San Francisco or some 'other' psychotically run DemonCrat Hellhole where they'll coddle your mental illness.  OR, stay, get the help you need and maybe assist in helping Texas (or anywhere else) become of a for-real Better state.
Whew... so yeah, I get a bit fired up.
I Loved Texas.  Hated "Da Hood".  Rural Texas is awesome.  Would LOVE to head back there but only if they make it legal to shoot motherfucking illegals and Demons.  True story:  The most anti-illegals in Texas are the legal Mexican migrants?  I knew a few of them in the DotMil in my time in Iraq.  They purely hate the illegals to the point that it was confided in me the reason you DON'T hear about follow ups on those groups of dead illegals that get found occasionally in the high desert who've been shot?

Sometimes it's the Cartels... But then again, it may be the legal newly-minted former Mexicans doing those dirty jobs no one else wants to.  Not the eeevil anti-immigrant (love how they call those douches 'immigrants' Aye?) whypeepo superpreemiecysts doing the killings, it's their fucking former countryfolk.  Sez a lot aboot that don't it?
So, More Later  I Remain The Intrepid Reporter
Big Country

Posted by BigCountryExpat at 1:13 PM