Greetings Me Droogs N Droogettes!
It's nice to be ahead of the power curve some days.  The ATC issues that were cropping up and I was one of the first bleggers out there to say "Uh... hey!" as well as the Auguson shortage.  Now, a lot of folks are and have been commenting (mostly at ye othere backup blegg) that Freeze Dried requires clean water and it's a gimmick! and the usual.  One person even commented that canned goods are cheap, and betterer.
Well all of the above I agree with however.  My rationale for 'sounding the alarums' and whatnot is that well, the length of time that freeze dried, if properly stored, can last.  Mountain House was the originator of the LRP meals from Vietnam.  LRP or "Lurps" stood for "Long Range Patrol" and was a further development from the NASA 'space food' that was developed for the space race.
An original LRP was essentially a dehydrated main meal, and some extras to keep the calories up.
It looked like this: 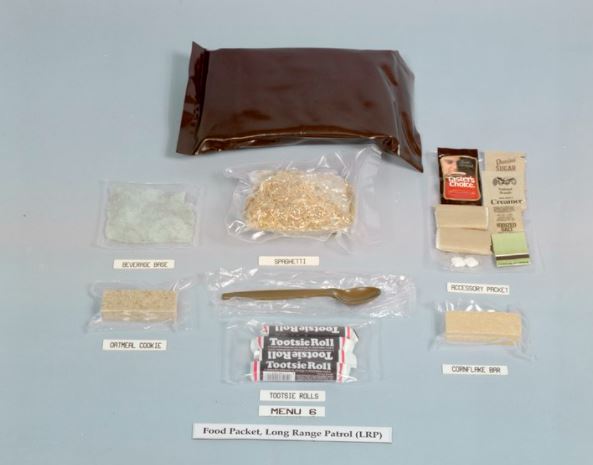 Now, cool thing?  IF you can find one at a reasonable price, they're collectable as all get oot, and expensive, BUT they're still edible 40 years later from date on manufacture.  There's a lunatic out on Youtube called Steve1989MRE Info who collects and eats ALL the DotMil food from ALL times and ALL dates, no matter how funky and old they are.  Oldest one he ate that I saw was an 1880's BritRat... one of the very first 'canned emergency ration' made of beef tallow and a brick of chocolate.  It was practically petrified and he paid a couple of thousand for it... he did up an original 1968? LRP Spaghetti and Sauce and apparently it was still good to the point of him calling it delicious...
Not that I disbelieve him, but this's a dood who's et 200 year old chow... no accounting for taste buds IMO Aye?  MH still sells the newer version on their website but the LRP has been renamed to the MCW which stands for Meal, Cold Weather.  It comes in a few flavors and runs $12 a meal on the MH website.
Canned food is cheaper, I agree.  BUT the lifespan?  Outside of Fallout New Vegas have I ever seen canned goods that've lasted 50+ years and still been edible.  The pouches me n Sapper picked up yesterday have an expiry of March 2051.  30 years and I'm willing to bet that IF it's stored carefully, it'll last a hell of a lot longer.
Personal Case in Point:  I got MREs I'm still snacking on that 'expired' theoretically years ago... specifically the forerunner of the McRib, the "Patty, Pork Rib (Simulated)".  And yep... the McRib came about BECAUSE of the manufacturing of the DotMil pork patty.  Same dude who made it for the DotMil went and took the recibe to Mickey D's and the rest is either gastronomic horror OR heaven (I'm in the 'heaven' side of the equation).  I bought a metric fuckton on the web for $2 a piece for JUST the patty when they only had a year left on the expiry, and that was 3? 4? years ago.  They're in another pelican case that's stuffed with JUST MRE pieces parts... mostly main meals that I also got with the patties... mostly beef patty and spaghetti, oh!  And the ravioli with beef... all my favorite except the Omelet with Ham. 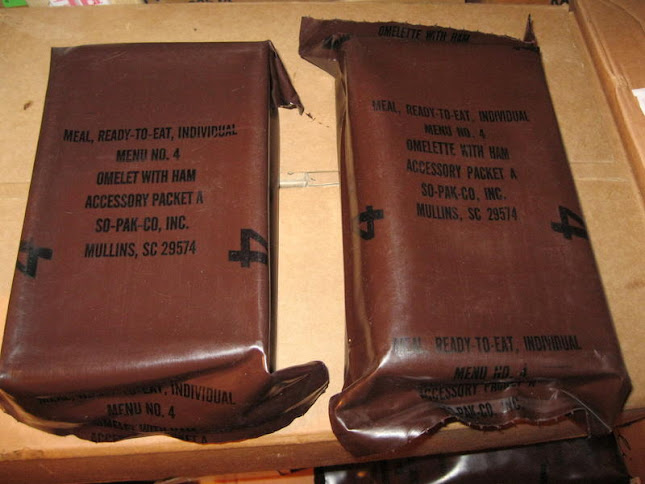 REALLY bummed I can't find those.  And for those of you who just recoiled/puked a little, on it's own?  Nasty, even when hot.  I however had a workaround that was key.  I'd start by heating up a ramen, any ramen, get it cooked in my canteen cup, then squish up the omelet and dump it AND the chees packet into the ramen after draining out the excess water... I'd leave maybe a 1/4 cup of the water, THEN add the flavor packet.  Mix it all the hell up and THEN Omelet with Ham was GREAT.
Now, 'other' comments:  The medical Pelican cases... yeah $615.00 from Pelican.  Crazy amiright?  If there was EVER a overpriced product, it's that.  Fucking crazy as hell.  The cases I have are the model 472-MED-30180802 Medical Supply Trunk

Now, for those of you who still have it, I recommend checking Fecesbook Marketplace.
Go to the marketplace and look for "military cases' and you'll probably find some.  They tend to be faaaar cheaper used.  Scraped the hell up, but still fully functional.  That or hit the local DotMil Base, go to the DRMO (Defense Reutilization Maintenance Organization) and find out what it takes to go to the monthly auction where they usually get rid of all that shit.  IF you don't get outbid by the surplus dealers that is... that being said -sometimes- you can go up to one of the winners of the stack, and make an offer right there and thne, and come away cheap-cheap for some top end cases.

Because we have McDill AND a lot of DotMil Contractors around here, we got tons of these things to choose from.  I have a need for maybe one or two more larger ones, and I'll be all set.  Just wanted to put this out there of the 'how to' on getting these a bit more cheaply.
So, That's it for now I think.
Head on a Swivel
Prepare to Defend Yourselves and your Loved Ones
"Come, butterfly
It's late-
We've miles to go together."
― Matsuo Bashô
I Remain The Intrepid Reporter
Big Country 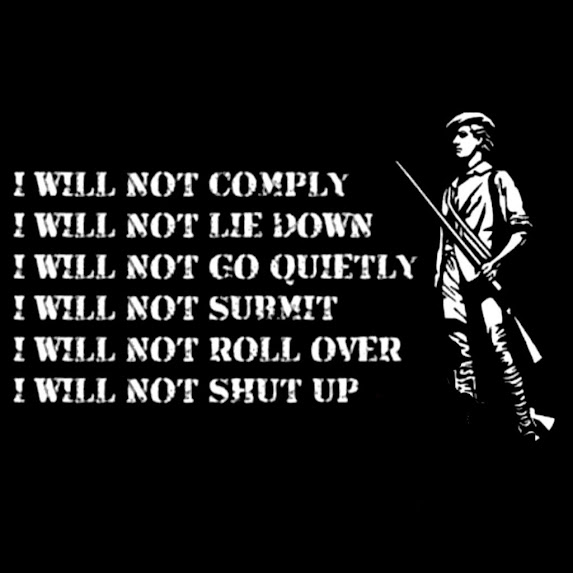 Posted by BigCountryExpat at 1:03 PM