Greetings Me Droogs N Droogettes!
Wifey and DumBunny are safely ensconced -somewhere- in a Motel off the beaten path for the night.  They're good, and my thanks to y'all for good wishes and whatnot.  Reader Warren on the other page (the backup) suggested "No Trespassing" Signs, which are going up in the A.M.  Normal American sent me the pertinent legal-beagle info on getting a restraining order as well.
Also seeings how the Troll Patrol has found it's way over to my other house.  I'm not going to poast this there, as they may/may not know about dis place here.  No -overt threats- as of yet.  Also, they've changed tactics, albeit a bit late in the game.  They're now using VPN and masking to 'bounce' locations on the IP tracker.  Poland and Colorado being two of the 'supposed' locations, but the issue is, they already told us their real names.
Case in point:

His oppression?  What in the fuck is this retard on aboot?  Dis here be my motherfucking house bitch.  Pretty sure he doesn't have the balls to talk to his momma about being 'oppressed' in her house... she'd whup the shit out of him... or maybe not... seeings he turned out to be a little Trotskite who makes threats at old men across the country.
The big difference?  I'm here motherfuckers.  In your state.  Where the Law is oh so helpful, but also worthless to a certain degree.  And, since they appear to be organized, well, lets show reality:

Brandon Wane: small time filmaker... website: lopictures dot com.
Now, the 'common denominator' to these assholes?
They all work for Disney.  House of Der Maus.  Der Fuhrermaus as it were.  Now, the highly entertaining side?  Well, let's just say, I got an angle.
Never fuck with a guy on his Home Turf.

I initially thought I'd give fair warning, but yannow whut?  Truman didn't warn the Japs about the bomb... so why should I?  Long time readers may or may not remember MY angle... but lets just leave it that I'm wired into Ye Olde Rodential Palatial in ways that normies can't imagine.
DeadDad used to say, "Never fuck with the Indians if they've stolen the Gatling Gun"
That and "Shoot low, they may be riding Shetlands."
Good words of Wisdom.  May have had my differences with the Old Bastid, but hey, tis whut tis Aye?
I'll leave it as simply this:  House of Maus is, in the vernacular, in my pocket.  And I'm sure that once I deliver the screenshots of A) The threats to Phil (and others) and B) finding out the possibility of bad press vis-a-vis employing Leftist Terrorists who're doing bad things in their off time, well, so much for THAT career I'd say.
You want to threaten, cajole and whine about oppression?
Enjoy what little of the rest of your professional lives that you have.
I have names
I have addresses
I live in the same state you morons.
The law in Florida, while being a bit odd at times, they take death threats and false reports seriously.  Brave online?  Great... Flame on.  Flame-wars are part and parcel of the internet.  BUT IRL Death Threats and DIRECT threats of violence?  Show up at my house here? Flame on.  Literally.  Obviously they missed the articles where I build flamethrowers for fun and profit.
And before you get all 'legal' snivvel-suit on me, these are completely legal in Florida.
Keeps it interesting Aye?
I can also file charges here you fucking idiots.  Mr. Ware, you you really think it's worth provoking a seriously PTSD'd paranoid on-the-record of having extreme anger issues veteran who also has a record of not letting shit go?  I mean for someone who's 'college educated' you sure as fuck are a dumb motherfucker.
To paraphrase Dean Wormer: "Soyed, Soaked in Napalm and on Fire is no way to go through life son"
And here I was hoping against hopes that I didn't have to deal with retardation.  I'm pretty sure that the death threats that they hit Phil with, because of the interstate nature of it, well..."A violation of Florida Statute Section 836.10, F.S., for making a threat in writing or electronically is punishable as a second-degree felony, punishable by up to 15 years in prison and a fine of up to $10,000."  So Phil, forward that to me, I got a Judge I'm really good friends with here who helped me out of my attempted murder charges a while back... I'm going to need the screen shots so's we can hammer Miss Ghetto Hood Rat into the Earth.  I'll press the charges here.
Fuck you because thats why.  You're offended?  Well, maybe you need to be offended.  I spent 25+ years in uniform protecting the rights of the United States Citizenry, such as little, spoiled fuckwads like you... and YOU think YOU have the right to fuck with us?  Let me 'splain something.  YOUR RIGHTS end at YOUR front door.  Leave US alone, and if your OFFENDED:
Then don't read our shit.
We'll have to be content with the audience we want.  And you, you ain't wanted
Go protest somewhere else... get a hobby
Don't make yourselves my new hobby
Jes' Sayin'
So, HOPEFULLY More Later, as Deez Bitches are Tiresome.
More Later I Remain The Intrepid Reporter
Big Country 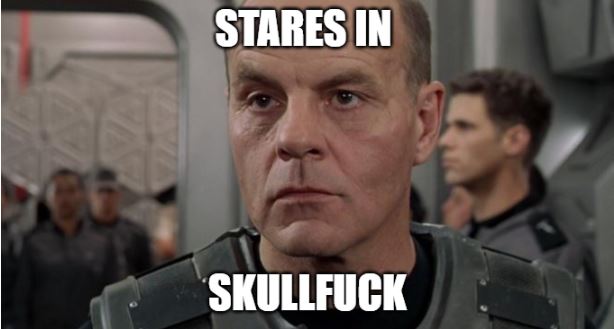 Posted by BigCountryExpat at 9:15 PM