Greetings Me Droogs N Droogettes!
Bit of a heads up.  Augason Farms, a competitor and slightly less pricey version of Mountain House has ceased production for the next 90 days due to 'supply line disruption' i.e. ain't no food available for them to freeze dry and make the vittles.  Now, not sure but the YewToob viday from a chick called AlaskaGranny has the lowdown and letter she was sent.

I went to their website and there's a notice:
"Due to an extremely high order volume through all sales channels we are currently not able to receive any orders through our web site. "
So yepper they're out.  For 90 days.  Now, to some that sounds like a "Meh." situation, and for a lot of people it is.  However, that's three months and a LOT can happen is three months.  And IF things go to "Sporky" that's a problem, and the issue is going to be local local AND local.  It's funny because not fifteen minutes BEFORE I found out about this, Sapper came is to ask my opinion of whether to buy some new clothes (his wardrobe is either Carhartt workwear for his job or basic bachelor "I don't give a fuck" t-shirt and shorts) so's he can look a bit more civilized outside of the usual 'bachelor scrub look'.  So his question:  New clothes or use the extra bucks to get MOR Mountain House up at Wally World.
He was up there the other day and said that the "Good" Wally World (in the nice part of town, and mostly Whypeepo live there) had a fully stocked selection of the Mountain House meal pouches, as well as the "Weekend Adventure" boxes that have 6 meals, 4 main entrée and 2 breakfast for $40.  Told him that I wasn't sure but that he does need some better duds for the rare occasion we hit the bar for a beer or three.  Then I saw the poast on the food sit-rep.
15 minutes later I had showered dressed and hit the Walmart with him.  We cleaned out the Mountain House as far as the budget would let him.  Me?  I plan on payday of re-hitting it IF it gets restocked, and if the "Good" Wally World is still oot, then we'll hit the two that're in "Muh Diversity" locations.  It's not the people per se, but the selection there is really shitty at BOTH places, and usually never gets a restock.  But he added it to 'the house food' which I keep in a medical DotMil equipment box. 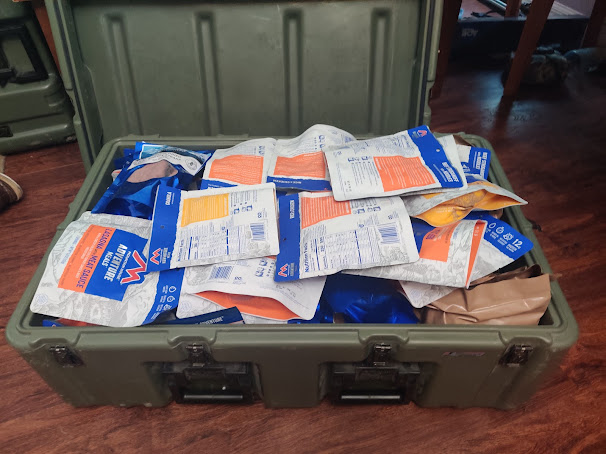 With MREs included (12 meals) and a bunch of them steaks and other dehydrated goodies, that's about 45-50 pounds of Mountain House ALL in the pouch variants and flavors.  Only flavor that we're heavy on is the Beef Stroganoff... I fucking love that stuff.  I have a pile of the MH "Pro-pack" ones as well as they're waaay compact like a LURP and smaller so's to be better on patrol in the ruck and whatnot.  One pouch is one light meal for two people. So that box represents at least a month of grub.  Maybe more maybe less.  Now with DumBunny and GranBebe#2 onboard for a while, file it under "less".  I need to unload it completely and re-inventory and get that listed on the box top, as well as portions.
The case I can't recommend enough.  I have two I shipped home for the price of mailing from Affy.  They have 10 locks (all intact on mine), perfect rubber seals and wheels.  And it holds a PILE of food.  Plus the interlock when you stack them together on the roof of the Putt-Putt on the roof racks.  Then a cargo strap and nice, weatherproof, waterproof and almost indestructible.  When emptied, fill them with sand for a nice bullet stopper.
So, wanted to give y'all a heads up.  Other observations at the "Good" Wally World was that it was full-to-overflowing with 'stuff'  Meats were good, hell they had Gatorade, not all flavors but it WAS in stock unlike Publix.  All sorts of shitpaper and the only thing I noticed which was amiss was the aisles in this place were chockablock full of still-in-the-shipping boxes... like WAITING to go on the shelves.  TONS of shytte Aye... whoever is running that particular store obviously knows WTF is going on, and took precautions to have TONS of extras on hand to put on the shelves.
So, More Later I Remain The Intrepid Reporter
Big Country 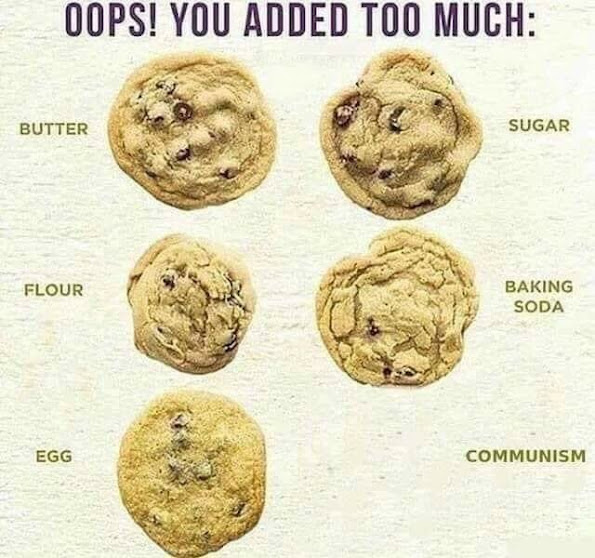 Posted by BigCountryExpat at 4:16 PM