Greetings Me Droogs and Droogettes!
A nice mellow Saturday now, quite time is here. The GranBebe has been handed off, and I'm alone, gloriously alone in the haus with only the katzen und hund to keep me company.  Now, the only downer, cain't have no booze dammit.  But, all is well.  I think we're headed into the "Eye of The Storm" right now.
The "Rally for the J6"?
A complete and utter failure for r/theirguys.
As I poasted on Gab when it first kicked off: 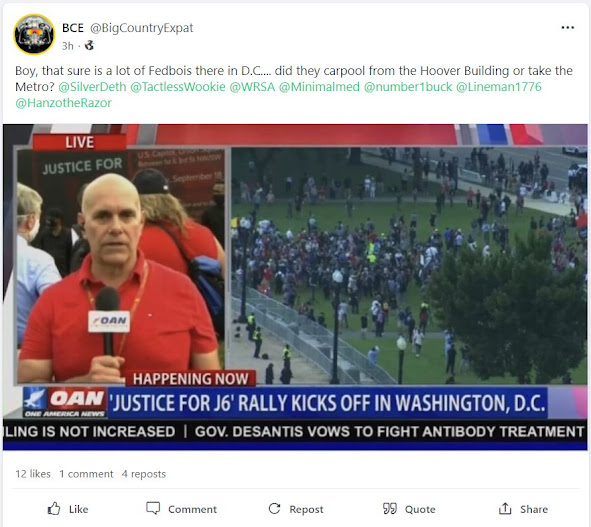 The comment on it was "That's smaller than the line to the toilet at a Trump Rally!"
I then, as the Shitshow of Stupid continued (brought to you by Fake and Gay INC) I found and did some quickie photoshop: 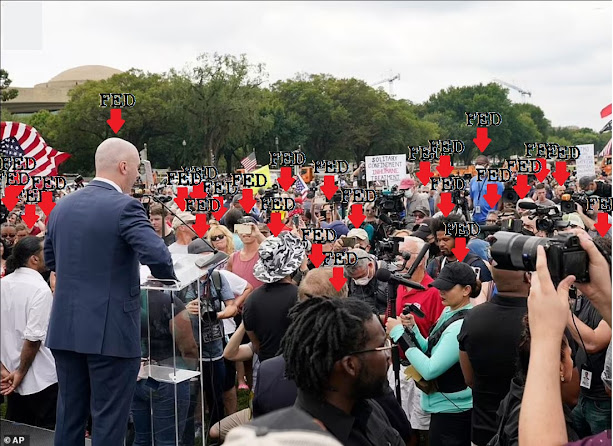 Turns out I was right on the money.
There was ONE guy with a gun found in the crowd.
Annnnnnnnnnnnd 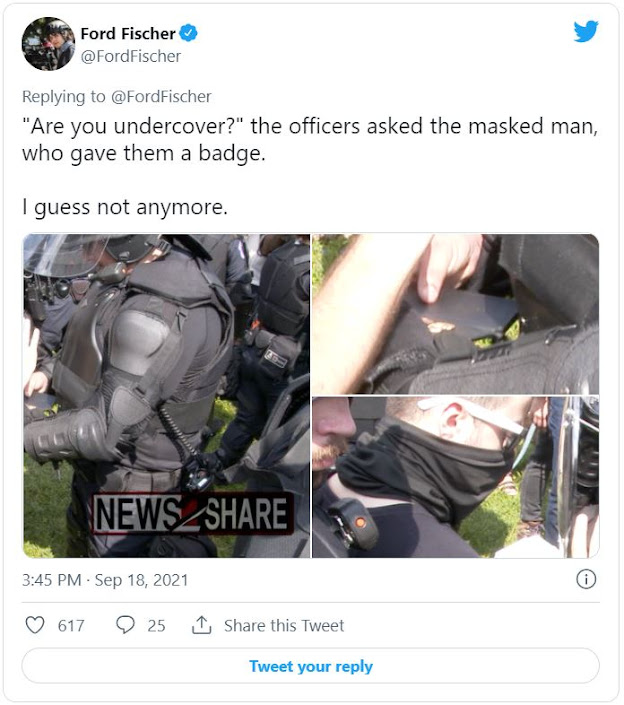 He was a cop
Story here: https://www.thegatewaypundit.com/2021/09/breaking-armed-person-arrested-j6-rally-undercover-agent-pulls-badge-video/?utm_source=Gab&utm_campaign=websitesharingbuttons
No fucking D'uh bro. 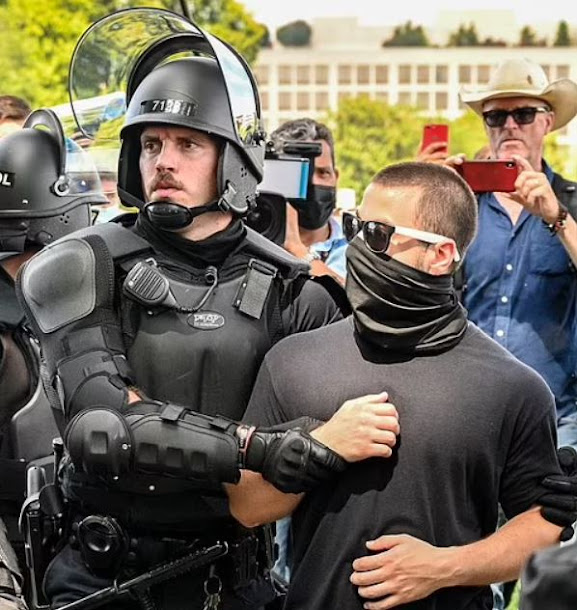 Better pic here for future reference... the twatter doesn't give a good look at him, BUT if'n you see -anyone- with that build/height etcetc, you have a Glowie in your midst.
To paraphrase Princess Leia again: "Little short for a Fed aren't you?"
Jes' Sayin'
God, the only thing funnier than this was seeing some of the few, the proud and the out and out fucking crazy that showed up to 'counter-protest'.  Man, you know, it used to be the hawt chicks were on the left side of the Political Spectrum.  As long as the hygiene was good, Hippy Chicks in College?  Man I done carved a swath thru them all...  now? 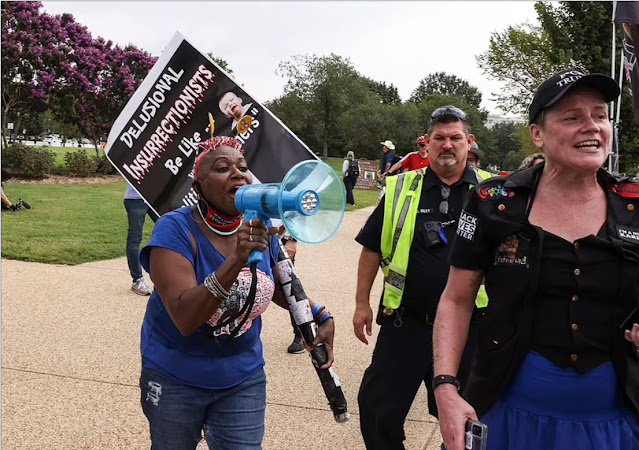 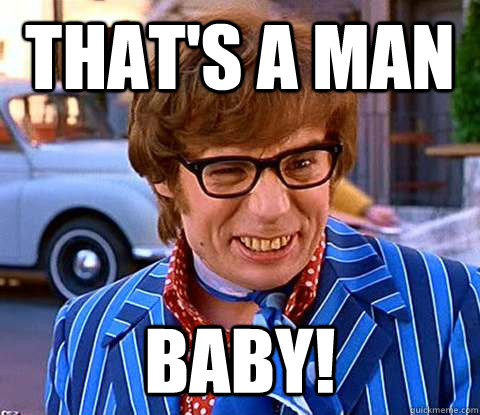 Yep.  Got it in one.
So, besides the harridans, butt-uglies and press, I'd say there were maybe four or five mentally deficient Autists that ackchully showed up from r/ourguys.  One of whom looks like the SUPER mini-me of Buffalo Guy: 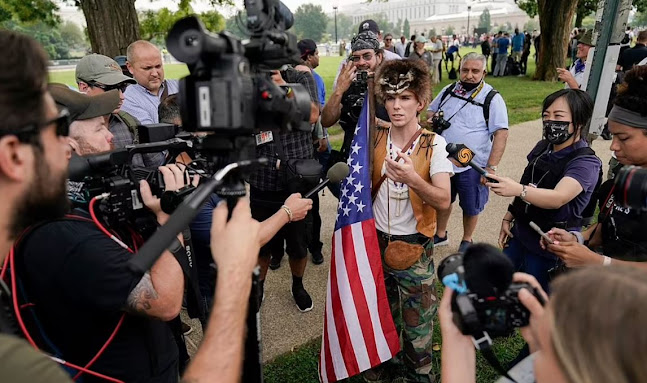 THAT right there is why you have to keep a close watch on your autistic kids... if you take your eyes off them for one second, they go out, snatch the 'Murican Flag off the front porch, and show up on the nightly news dressed like a moron, and looking like a mentally challenged 'special person'.
Folks, friends don't let autistic friends run around like retards Mmmkay?
So, as I was saying, I -think- the DC show was supposed to be a big -to-do-...
However, as I've so succinctly stated in the past, the fucking mental midgets and morons inside the 495 Beltway, well,
A) they ain't none too bright, and
B) they have no fucking clue as to real life outside of that rarified Zone.
I'd have to say that even the ones who commute or live in the 'burbistans around the 495 beltway have z.e.r.o IRL experiences outside of DC.
Leastways not as grown-ass folk.  If they were born in 'Smalltown' USA?  I'd say 90% of them who Got The Fuck Out of Smalltown, well they did it as soon as it was possible and don't remember it fondly, unless they're pandering for voats.

They only remember living in 'Smalltown' in a negative fashion from their childhood as a town filled with Rednecks, Religious fanatics and sheep fuckers.  Lets face it, a LARGE and VAST portion of people who're politically inclined tend to either be sociopaths OR the fucking narc kids you couldn't fucking stand in school... the paste eater who dimed out -everyone-  Teachers Pets and the like...
So yeah, they remember Small town 'Murica as filled with hateful, intolerant, small-minded rednecks, and subsequently think ALL of us are like that... hence the 'deplorable' term from Hill-dawg.  Miss 'High-borne and Raised' in Chicongo, and had to move from the power center of the East Coast Elites to Arkansas to tie into her money train?  The Horndog from Hope?  No wonder she's pissed... she had to tolerate that backward assed redneck state while her Philandering Hubby worked his way through the political ropes and such (never mind his assisting the CIA what with the Mena Cocaine Connections AND all the local hotties as well... gotta say Bill was a swordsman first-class) til she was able to GTFO of the backwater for DC.
So, in their heads this's gonna be a slam-dunk
Instead they got a wet fart.
If anything, talk about reading the crowd wrong.  These guys couldn't figure out if their ass was on fire with both hands.  Plus for r/ourguys I guess.  Not to let your guard down though.  Nope.
Head on a Swivel
Like Always.
This's the "Quiet Before the Next Storm".  They got their collective asses handed to them in of so many ways.  Read Aesop's blegg from this A.M. and you'll see what I mean.  The TL;DR is that the vaxx?  They know and admit that it IS a death-shot.  No idea how that'll play out, but it's now off-fish-shully in the open, and things may or may not get sporty to spicy.  https://raconteurreport.blogspot.com/2021/09/fda-covid-vaxx-71x-more-heart-attacks.html
To give an idea, my ex-Father-in-Law, whelp, he dead.  And now, it's apparent that it was like only a few weeks AFTER the clot-shot.  Spawn is a mite pissed.  Like under control, but seriously bent out.  Now, multiply that by a metric fuckton of already-dead, and now the waiting-to-have-a-side-effect victims?
Hoo Boy.
"The weather today has a forecast of 'Spicy to Bugfuck-Insane/Kill-The-Bastards-and-Their-Entire-Bloodline."  And now back to Chet for the news..."
Indeed.
"Vaxxed Population Eats Loco Weed. Goes Bananas in Spades, Film maybe at Eleven, IF we don't get kil't by the rioters."
Jes' Sayin'
So yep.  This's the quiet time
Enjoy it while it lasts.
More Later I Remain The Intrepid Reporter
Big Country 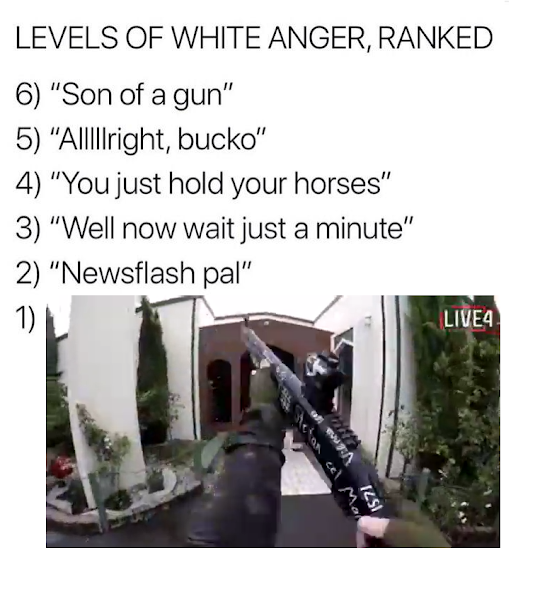