Greetings Me Droogs N Droogettes!
<Queue Announcer Voice>
"This Saturday, Fake and Gay Government Incorporated, assisted by The Federal Bureau of Incompetents, we proudly announce the latest FALSE FLAG FOLLIES!  Yes folks, right here in our Notional CaPITal, we're planning on sponsoring the next Big Buffalo Jump!  Bring your friends and family!  Make sure to poast all your pictures to Social Media INC so when we need to round up more scapegoats, we'll have no issue finding you!  Participants are full encouraged to do stupid things, and win stupid prizes!  Come one, come all, 'cos we need the bodies to justify our existence!"
(Sponsored in whole by the Democrat Party and its "Committee for Make America Venezuela" Branch.)
My answer per usual:
Get fucked. 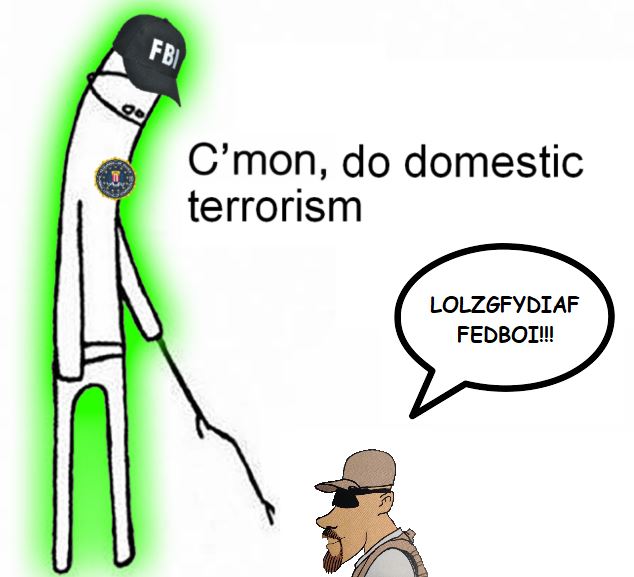 After January 6th, if anyone ackchully shows up for any sort of protest in D.C., yer fucking retarded.  Like so fucking stupid, YOU are the reason we have warnings on coffee cups and plastic bags.  YOU are a blight on humanity, and should report for immediate and permanent sterilization, as we can't afford to have you polluting our genetic pool by pissing in it by you reproducing.
Seriously, if you plan on going to D.C., just kill yourself.
Be faster, cleaner and less torture from what I understand.
The last thing r/ourguys/ need is MOAR negative visuals.  However, some people are just dumb.  Dumb and/or hoping to 'become famous'... I can gar-ron-damned-tee that Idiot Buffalo-Boi 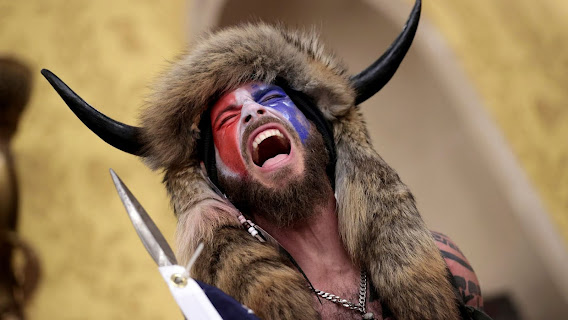 This fucking retard who got busted, beat on in jail, and now is like going to be locked-the-fuck-up for essentially being an unauthorized tourist?  Yeah, Just by the fact of how he was dressed, his prior 'modus operandi' and whatnot, a typical 'wanted his 15 of fame'...
Man, fucker got it tho didn't he?  In spades no less.  'Cept instead of being feted on talk shows, or getting offers to be interviewed, he's spent the past 8 months being held incommunicado in jail  AND depending on if you believe the reports, fucking beaten by Nigger Guards on the regular, denied the most -basic- needs and generally treated like we treated the Nurnberg Trial Defendants, i.e. tortured the fuck out of them for sport.
And now, how many years is this poster-boy for Mental Retardation facing?  Quite a stretch is my guess.  And anyone with him?  The very fact that they raced this moron into a plea-deal tells me they programmed the shit out of him to spill anything they wanted him to, i.e. that there was a giant all-encompassing plot to overthrow the Legally Elected Dementia Poopypants Kidsniffer.   Getting someone to 'false confess?' Too easy... won't say where, won't say when, BUT, putting a doodz balls on a steel table, and slapping said-balls lightly-to-medium with a blackjack will produce instantaneous compliance and information flow... that is, of course, after the subject stops vomiting...
Annnnnnnnnnnd half the guys reading this just flinched.
Hey, I almost puked BUT we got good intel.  Saved some lives.
Meh.  Not that the dood in question was going to need them... he only fucked goats.
So, yeah.  This's bullshit.
And considering the false flag that they sponsored a few days ago, "Mister Satanist Neo-Nazi Eeeeee-vil Whypeepo in a Pickup Truck" got arrested in D.C ahead of schedule.  Methinks he shorted on his programming and 'launched early' IMO.  As in -someone- wound up ANOTHER headcase to go to D.C. and stir the shit-pot, and he fritzed on them.  hence the complete vanishing of the story.  THAT fucker got memory holed so quick I barely had time to register it.  He fritzed, grabbed some knives, mounted up in his piece of shit pickup, and managed to drive across the country without a license plate.  Without getting stopped?  Must have been like when the FBI escorted them two Hajjis to the Garland Shootout, and then fled, and when HE was captured, they let him go when he 'badged' them... meaning dis fucker Fibbie, literally played 'chase car' for the two hajjis who shot up Pamela Geller's "Draw Muhammed" exposition at the Culver Center in Garland Texas... word is the FBI ALSO provided the 'logistic support', i.e. gave the fuckers the guns, ammo and body armor.  Said Fibbie watched the shootout, and when it went south, he bailed and got hemmed up by the Yokel Locals, who, when he flashed his badge, was let go
Nothing the Locals did was wrong, but the Fucking Bureau of Instigation?  As they say, without the FBI, there wouldn't BE any domestic terrorism.
Change my mind Aye? 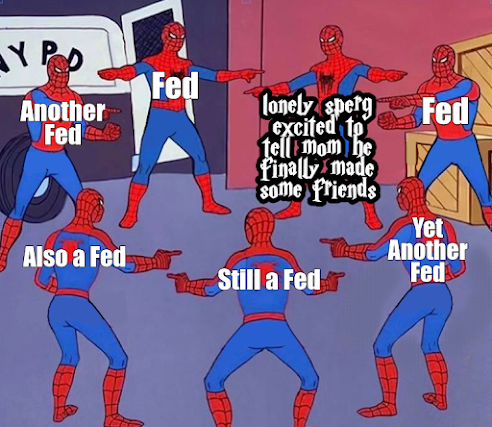 Yep.
The base will not hold 'cos it's rotten through and through.  The kind of rot that, if it were termites, even the Orkin man would throw his hands up and call it a day.  Only thing we can do is let it collapse.
So, besides ringing THAT bell I do have to say I was a mite surprised by this: 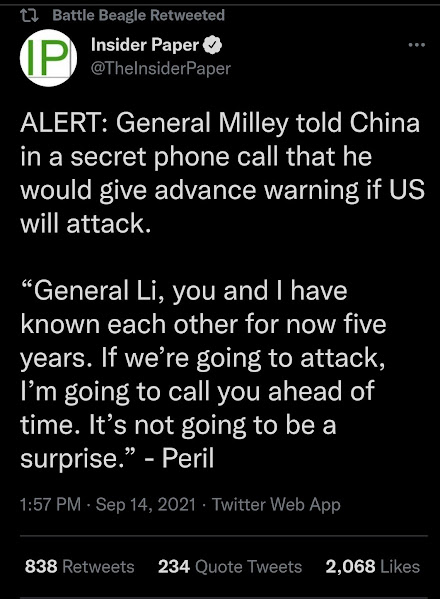 Say fucking WHAT!?!
OK... that's a first for me... definitive, by-the-book fucking treason.  Huh.  Not that I expect anything to come of it.  EVERYONE on the 'inside' HAD to be aware of this.  This 'leak' is from a book published by Bob Woodward of Watergate fame (which, like the Holocaust and Slavery, man, them horses are beat and dead.... get over it already)... whelp in order to do a BIG investigatory novel like that it has to be vetted by certain orifices and such whatnot.  Add on Woodward is definitely r/theirguy? Uh yeah, not buying it....
Which means the people on the 'inside' knew this shit was out there, and nothing was done, as this would be 'actionable' as soon as it came to light.  Seeing it's September, and between the nonfunctional Afghan Bugout Boogie, and that Madman Whytte Rage Milley and Vanilli Austin haven't gotten the chop, reprimand nor what I consider the proper answer to such a COLLOSAL FUCKUP which -should- have been a pistol and one round of ammunition, and yet they haven't even had so much as a letter of reprimand... in fact I think they crafted a new medal, "The Kabul Killshot Medal: Awarded for managing to get over 12 soldiers killed at the end-of-mission, cluster awarded if multiples of 12 are killed."
Seriously, the very fact that they haven't even acknowledged their misdeeds show that they, as men, are not men, but little spineless corruptocrats unworthy of anything... unspeakable TRULY deplorable scum without honor, decency and the right to lead warriors should be forever revoked from them.  They are the walking damned, and I feel personal dishonor to see that traitorous fucking fat fucking scumbag wearing MY patch of the 101st Airborne.  I cringe looking at his fat, bloated plutocratic ass, and only wish to see a reenactment of "The Ceausescu Minute" of 4 guys with M-4s, 'cept starring members of the Active Duty doing it, poast-conviction for Treason.
BUT
Nah... not going to happen.  They knew, now we know
Ain't nuthin' but a chicken wing.
Thing to look at this release?
Cui Bono?
WHY now?
THAT's the milllllyun dollar question.
So,
Watch your Six
Be The Gray Man
Solidarity Now
More Later I Remain The Intrepid Reporter
Big Country 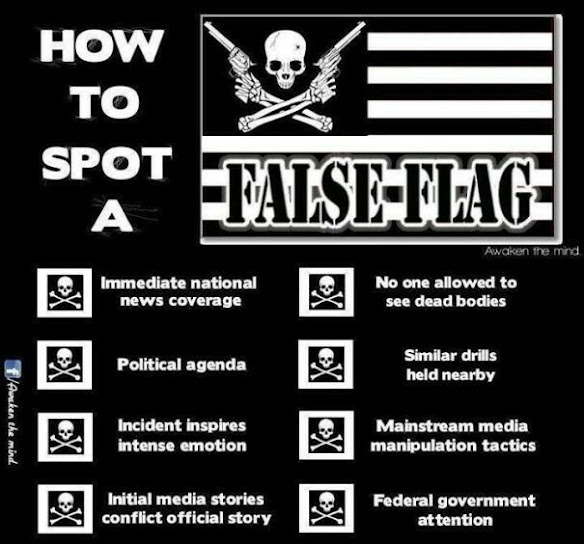 Posted by BigCountryExpat at 2:31 PM