Greetings Me Droogs N Droogettes!
Man, Y'all rock.  Period F'n Dot.  One of you sent me the link to the SIR Report of yesterdays Poastage.  Now seen here: 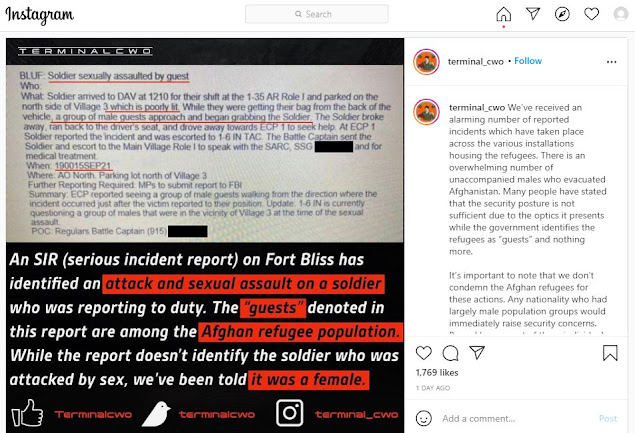 Huh... so sees this happened on September 15th.  Nothing in the news anywhere.
Guess they're too busy giving "Whypeepo Privileges" to that DeadChick Gabby whatserface...  THAT has been like story numero uno on the Ministry of Propaganda's sounding board for the past few.  And the demonization of Dude who was with her?  Well, t'ain't helped that he went on the lamb.
But as a few of the red-pill sites have said, ain't no-way-no-how are they gonna give him what would be considered a fair trial.  Oh, they'll give him a 'fair trial' but between the leaks and well, the generally shitty way he acted in general, they'll hang his ass either way.  Personally I think he kil't her.  Some of the RP Guys said she may have left him and gotten a ride with -random murderous dood- who did the deed, but as of now?  Don't look good for him
But besides the distraction...
The DotMil can't be happy about the whats obviously a screenshot photo from a phone camera of the report being leaked.  Got a hunch the reaction's going to be banning of personal phones in the TAC.  The actual breakdown of events was that she was showing up to work at the DAV (unfamiliar term) and got accosted.  She made her break and went to ECP 1 (Entry Control Point #1, guys at the front gate more n'likely, with loaded weapons) and they took her to the 1-6 IN TAC which is 1st Battalion of the 6th Infantry Regiment, and assigned to 1st Armored Division.  The TAC could be either the Tactical Air Center, or, my guess, is the Tactical Assessment Cell (Intel Squirrels) who'd be more likely to be watching over the "Guests"...
So, the reaction to this of course will be to hide it
Deny it
and Bury it
Deep.
Would you expect anything else?  One of y'all reminded me of the 'neutral steer' option on the What-if-Rampage... yep.  Now for those of you who don't know, neutral steering allows one track to move forward while the other reversed, allowing the tank to spin in place like a 74 ton top.  And man, it can go fast if'n you can deal with the nausea.  First time my driver did it, I had to puke into my CVC shell (the hard part of the Tanker Helmet comes off, and makes a good emergency puke-bucket in a crunch, rather than puking on the floor of the turret.).
If the What-if-Rampage happened, the neutral steer, well the tracks grind -everything- as they continually spin in opposite directions... on soft ground you can actually 'dig in' a bit as the tracks will throw dirt like a motherfucker.
In Gulf One, a lot of the tread-heads literally ground up pockets of Iraqi Infantry in the trenchlines
Ain't pretty, but War ain't supposed to be.  Which is a BIG reason we're so fucking pussified as a nation.  The people here in the Untied Statz get a really sanitized bullshit happy-happy fucking Point Of View.  In real life, War is a right horrorshow, and not in a Clockwork Orange way, but a fucking nightmare kaleidoscope-from-hell.
The fucking snowflakes out there have like NO idea what they keep begging for.  To them, it's a movie or TV show.  I -was- guilty of that shit too until I got in my first scrum.  Nevermind my first suicide bombing.  In fact, story time... One of my more memorable Mass Casualty Events was in 2005.
It was June it seems.  I didn't remember it until I was watching HBO with Wifey the other night.  Watched a show called "Baghdad ER" which follows a emergency room unit at the main CASH in the Green Zone in downtown Baghdad.  Right in the middle, they had a Evac Chopper fly in from Victory/Liberty after a rocket attack at the PX, and I was all like "Oh shit!!! I remember that!  I was there!!!"  I then told wifey the same thing I'm going to pretty much lay out here, and I paused the movie and told her...
June 12, 2005, I had an early morning.  We had a whoooole slew of replacements coming in from the CRC in the states.  Since I was the Operations Manager, it fell to me to shepherd the FNGs around (fucking new guys). These were normal rotational replacements, so I had to be at BIAP at oh-dark-early for the pickup.  Got there and got 6 New People.  They were tired, worn out.  I knew exactly how they felt, between time changes and weirdness.  I got them from BIAP to the house so to speak, where they turned in their paperwork, where our admin took it all in.  Next step was to get them to the PX, which we called Wally World, 'cos it was as big as a stateside WalMart. 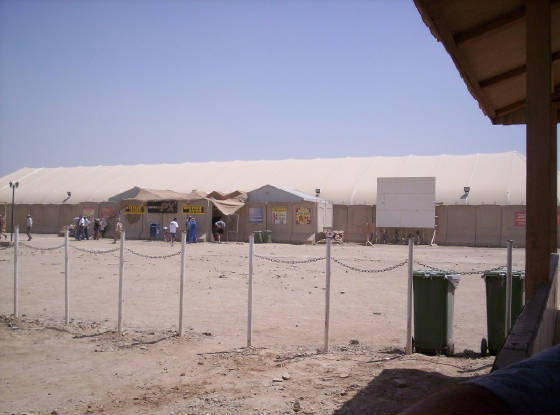 Now, that pic was BEFORE this attack... I'd say late 04.  The literally covered the ground with 3 foot by 3 foot pavers and gravel at one point.  On the right hand side was a big open lot, a horseshoe shaped thing of smaller "Hajji Shops", actually run by Indians, jewelry shops, T-Shirt shops and the like.
So, this's actually where I dropped off my folks to get the bare basic minimums.  They needed pillows, sheets, soap, the stuff you wouldn't normally pack when you have such a baggage limit.  FYI, you were allowed to bring two standard duffel bags of gear, one of which was usually packed chock-a-block full of Army Issue Bullshit from CRC.  Of course once you lern't how to game the system, you could get away with NOT taking or signing for the gear from the CIF (Central Issue Facility).  I used to BMOBA (brought my own body armor) because it was better and lighter than the issue, and my own skull-bucket.

The rest of must have shit?  I had a deal worked out at the local surplus store where I'd 'rent' the needed gear for CIF day... You had to have the gear that they were issuing you, and if you 'already had it', then they checked you off... only once did I come close to getting caught, and that was a keen-eyed NCO who spotted that some of my shit was Xtra Small sized... he was cool about it, and so, when it came time to leave, I had almost a full duff worth of space for my own shit to take with.  Like ammo.
So, most of the FNGs didn't know that angle.  They had everything issued, and the minimum of their own shit.  So, to sleep, they needed bedding.  Anyways, long story getting longer.  I dropped them off almost at that exact point in the pic above.  Told them I'd be back in a hour.  They went into the X-zone so to speak.  I started back to the 'house' for my late dinner.
Halfway up the road, I heard AND felt was a big >KABOOM!<  Shook the truck like a motherfucker.  I started looking around, and ahhhh shit... the rear view mirror?  Fucking Mushroom Cloud... right where I had juuuuust dropped off the FNGs
Damn.  Ain't that a bitch.  Dialed around 180 and hauled balls back to the area (highly discouraged normally, as you never knew if there were MOR rounds inbound to the same general area.)  I screeched to a halt, grabbed my omnipresent aid-bag and ran into, well, hell.
Bodies everywhere.  Pieces parts, Blood, the smell of high explosives and empty bowels.  Bunch of the shops riddled like a colander with shrapnel and faaaar too many people all sorts of fucked up.
In the chaos, I stayed the fuck away from the casualties, as it seems the Joes had everything well in hand.... What I did do was started looking for my folks, who, thankfully -suddenly- showed up a little worse for the wear, but alive.  One Joe had gotten killed apparently, but man, the Indians took the brunt of it... lots of Indians blow'd the fuck up.  My folks? One of them had blood splashed all over them, but it wasn't his...  That dude had the 'I'm in fucking shock' face going, so I rallied everyone up, and threw them in the truck, and we boogied the fuck out of Dodge.  We got back to the office and everyone, who'd heard about the attack, well, needless to say, much relief all around (we had lost people before in a Souk Bombing in 04, that was my first Mass Cas event, identifying our folks who got whacked). and the Boss broke out the good forbidden booze and passed the bottle.
I however, despite the shit, wasn't allowed to partake.  I had to drive to manifest 3 out of the 6 back out of country right fucking now thank you very much.  "No offense Mr. Big Country, but we fucking quit bro, this's a little too real for us."  They were on the next thing smoking to the USA via Kuwait.
Hey, no harm, no foul bro.
Not everyone can deal with that shit IRL.
Of course it's the after... the long after where you've buried that shit, when it comes back to the surface on bad nights or some such, then it sucks all over again.  PTSD, pleased to meet you, won't you guess my name.   Fucking Aye to that me Droogs.  In fucking -Spades-.
I'm better though.  After relating the story of this, I un-paused the movie, and sure as shit, in rolls all the cast of people I saw and such, mostly the Indians and a few of the lighter wounded Joes.  The story was here: https://www.stripes.com/news/soldier-killed-20-others-injured-as-rocket-hits-camp-liberty-1.34117  Needless to say, Wifey was impressed... hell, I was... always had wondered what happened to them poor guys and gals who got blow'd up after the fact.  We got the fuck out of there to avoid witness statements and getting involved... gray-man avoidance mode you dig?  But, at least now I know....

Man, lived history.  Fucking cool IMO.
But yeah, so I gotta bounce, another busy day.  I'll get with you all later if'n I can.
More Later I Remain The Intrepid Reporter
Big Country 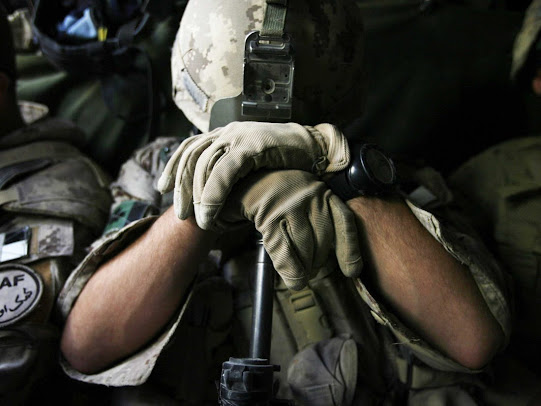 Posted by BigCountryExpat at 3:16 PM