Greetings Me Droogs N Droogettes!
Everything is alllll good here at La Casa de Gran Pais.  GranBebe has centered me a bit, and she's busy as a beaver today with a new toy Wifey found at the Goodwill.  Little did we know it turns out to be a $300 'smart' toy robot thingy.  She's ALL about Paw Patrol as some of you long-time readers remember the "Christmas Assembly Wars of 2020" when it was me versus the Paw Patrol Main Base Tower.  Wifey found this "Marshall" (as in fire marshall) robot talking toy.  Spent a fiver on it.  We knew it talked, and it's been in the closet for quite a while as she wasn't old enough to play with it.  So today we gave it to her, and I went online to get the instructions... come to find out?  No longer made, in great demand, and worth $300.
Sheesh.  I wish my investments could have that kind of return
Only investment I made in the stock market IRL -ever- in my life was about 6 years ago.  Weed Stocks, riiiight before the legalization rush.  Figured it was a no lose.  Only $100.  a $1 a share.  Now?

Keister, meet Easter.
Figures.
But then again, the DotGov stepped in regulatory wise and tax wise and fucked the whole thing up.  Only the DotGov could fuck something up like legal drugs amiright?  This was even MORE stupid as it's a Canadian dealer/grower.  Heavily regulated.  To the point I now hold what?  A whole $1.70 on my investment?
THIS is why I never invested anything in my life.  No 401K, no nuthin'... in fact what was that BIG crash a while back?  I had gotten 'invested' in THAT particular 401K without my knowing.  The company had an 'auto-add' for it, not that I got into too heavy before it wiped the hell out.  I'm like the Black Death of Stocks... you want one crashed?  Let me know, I'll throw a Cee note at it, and watch it burn.  Guys like Divemedic are gold from what I can tell 'playing the Great Game'... me?  Notsomuch.
So, as this A.M.'s blegg title sez, I'm beginning to wonder about some stuff I keep reading on the Daily Fail... er Mail.  Now, a lefty 'Notional Enquirer' for Brit-land, it IS pretty 'shambolic' as the yobs would say.  Lots of celebutard worship/gossip, lots of the Royals and who the fuck cares.  However, they do publish a TON of info we never get here in the Untied Statz from the Ministry of Propoganda.  Makes me wonder if it's the intention 'thumb in the eye' towards the regime that they do it... but... that ain't the point.
Thing is, they're balls-deep on the Coof-Proof Skeer. They publish -at least- three to four a day of "...tragic deaths that could have been avoided only IF said-dead motherfucker was vaxxed!".  Like so many, I started counting a week ago.  Most are minor folks.  However... one thing has stuck out at me. 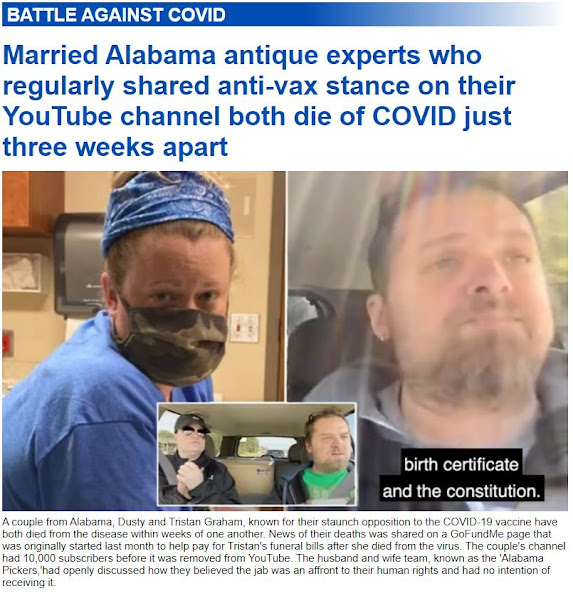 This's todays 'blast'
What I noticed was every. single. one. of these announcements of the KIA'd, is that they all had one thing in common.  They all were publicly outspoken against the vaxx.  ALL of them.  Not just onesies-twosies.  Nope.  The entire weeks worth of garnering the count, ALL of them were either minor politicos in a local capacity, or Tik-Tok 'stars' or YouTubers with a minor following.  They ALL had a strong anti-vaxx stance.  And they ALL seem to have died.  By my count, I got in a 7 day period, 18 folks.
Now, that ain't a BIG sampling.  BUT... these being these days, and considering the 'real numbers' out there of people dying is relatively unknown, the number of vaxxed dying versus unvaxxed dying is really unknown, I do think it's an anomaly to see folks who're outspoken publicly -suddenly- getting the Beijing Booger Bug, and not only that, but a really deadly variant?
I mean what are the odds?
Seriously.
We've all seen the movies.  How hard would it be for an operative to 'spritz' a really virulent variant of the Coof in their coffee/face/whatever?  I mean honestly, I wouldn't put -anything- past our current regime.  Especially to 'keep the skeer on.'
As it appears that the Big Push for the vaxx is wrapped up in contractual necessity, and 'control group theory.'  Lots of recent 'stuff' coming out as to the fact that the Vaxx?  It's killing motherfuckers stone dead by the bushel.  And if there's a obvious large group that ain't vaxxed the nonvaxxed are going to stand out in large clusters, showing the Vaxxed just how fucked they are.  'Cos them vaxxed?  LOTS of them aren't immediately fucked.  Nope... just long term, (2-3 years before the prion disease eats their brains or so I've heard one 'scientist' posit...) and also, seems cancer has made a HUGE uptick in the Vaxxed where there wasn't any sign nor susceptibility before... and a lot of them are r/ourguys.  Lots of guns.
Imagine if you will, you fucked up
You trusted the DotGov
You 'followed the science' and let them inject you and your fam with two shots of -something-
Now?  Your 18 year old kid had a heart attack, but they swore it wasn't vaxx related.. "Just one of those oddball things."  Then your wife, six months after Vaxxday, finds a lump.  She's been having a hell of a time too... she'd just finished menopause and was finally getting her groove back vis-a-vis 'bedroom funtime' and post vaxx, well, not for nothing, she's having really bad periods like every other week, and wants -nothing- to do with "Mister Happy".  You're having a hell of a time finding a Doc who's willing to check the wife out about the lump (which is getting bigger), and the Job is being stupid about masking.  For fucks sakes you got vaxxed!  You were promised that shit would get back to 'normal' for whatever values that is these days...
And then word starts coming out.  Your brother in law (who you despise) who was one of 'those' people... them anti-vaxxers, he sends you an article showing proof positive that ALL these issues are actually related to the "vaxx"...that your son?  Long term he's going to need a new heart.  Old one is busted permanently.  Without a transplant, he's got 4-5 years tops.  Non-quality life either.  The wife's cancer?  You B-I-L blames you for his sister's cancer, AND the fact she's probably fucked in the long term as well...
You?  Man, 8 years of diligently following orders in the DotMil... 8 tours in the Sandbox.  LOTS of shit... deep dark shit that only you and your boys talk about in hushed tones at the VFW.  It's why you followed the President's urging to be 'a good American' and now?  Oh yeah... about that...
Ranger school sucked, but being in the Bat (ed. note: 75th Ranger Regiment is known as Ranger Bat or the Bat) made it worthwhile.  Your tours of duty sucked MORE, but this?  This mission is going to be cake.

They'll never know what hit them.  Payback is a bitch.
Fictional, but highly likely scenario IF they don't get control of the situation.
And that's the crux.
They never HAD control of it.  The short sighted fucking dimwits "I'd never take a vaxx rolled out by the Trump Administration!" equaled "Nope, what's the difference between HIS vaxx and YOUR vaxx there Joe?" with the softheads who followed the guidance and bend at the knee for The (p)Resident, The Dementor-in-Chief, Emperor Poopypants the First, Chief Executive of the Kidsmeller Pursuivant, Good Ole Slo Xi-Den.  Never mind the more obstinate, obdurate and down right "Fuck you I won't do what you told me!" folks out there like meselves.
Them 'offing' outspoken not-to-be missed minor folks?  Oh hell yeah. I can totally see them implementing that.  The larger problem is people like that slore Mickey? Nicky? Mirage?  Whatever... I only saw the memes on Blab about her... some pink haired female 'rapper' who looks like an inflata- black barbie doll who apparently is balls deep in the beef against the vaxx... they can't zigzactly off her too easily, unless they disguise it as a rapper-hit-cum-drive by.  Which, IF she gets whacked, you heard it here first.  Seems she twatted something about her cousin getting terminal ball inflation or something in the DR.  Then CNN and the Guardian threatened to dox her fam if they didn't speak to them... well, she didn't take kindly to that and punched back twice as hard ghetto-hoodrat style and doxxed the reporter(s) in question, which led to all of her followers and fans wanting to burn them (the reporters) alive at the stake
Not a bad solution IMO.
She is scaring the fuck out of the Committee let me tell you.  A black chick with a HUGE following who's got fucking gangbangers on speed dial pushing back hard against the vaxx?  I mean not for nuthin' the blacks ain't exactly been lining up to get the clotshot.  The whole Tuskegee thing left a very sour taste in Ye Olde Blacke Folkes mouths. Trusting "The Man" ain't in the cards as a survival instinct.  Wonder how that's going to play out in the end?  They'll either pay her off or kill her off.  Can't see them cancelling her, as she makes too many (((people))) monies.
But yeah, "Strange things are afoot at the Circle K" as I like to use that line for odd co-inky-dink things I see.  And the apparent deaths of a LOT of 'minor celebs and politicos' seems a tad odd.  What I'd like to see is a part-in-part analysis of "Unvaxxed People Who Died in a X timeframe" versus "Unvaxxed People Who Died who were Social Media Famous and Promoted Vaxx Skepticism in a X timeframe" as a percentage of the whole.  If out of ALL Unvaxxed, say there were 100 who died in a week, and out of that 100, 52 of them were minor celebs, or social media known for an anti vax stand, then that'd be a serious evidentiary given that there's a -strong- possibility that they got whacked.  52% would be a serious anomaly in my eyes.
Of course I'ma just pulling random shytte out of my arse, but that's typical of me
Food for thought though Aye?
So, GranBebe naptime.
I'm bushed, per usual.
More Later I Remain The Intrepid Reporter
Big Country 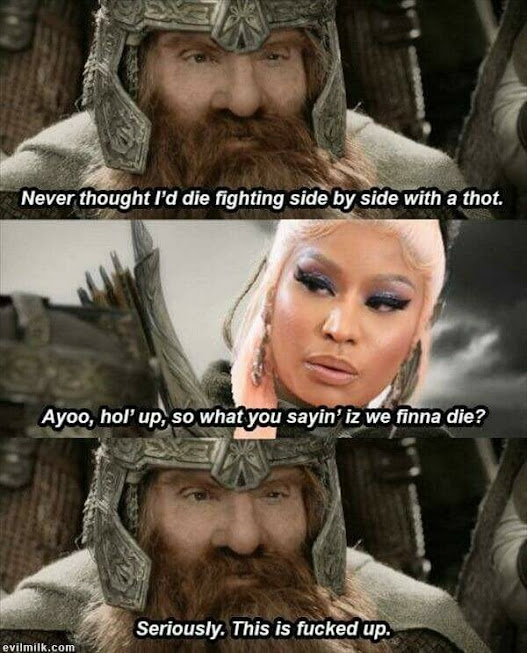 Courtesy of Blab...  one of them memes I mentioned... I LOL'd
BigCountryExpat at 11:35 AM
Share