Greetings Me Droogs N Droogettes!
OK
Yannow... there are few times few and far between that I get genuinely angry.  Tonight though?  That mealy-mouthed fucking apologist for the Traitorous Regime?  Yeah... the "Marine" and yes, I used quotation marks as this piece of shit doesn't deserve the honor of being called Marine... this cowardly motherfucker is taking the fall for the murder of that Afghan Civvie family in Kabul.
3 Adults.
7 Kids.
"I offer my profound condolences... ...and I offer my sincere apologies" 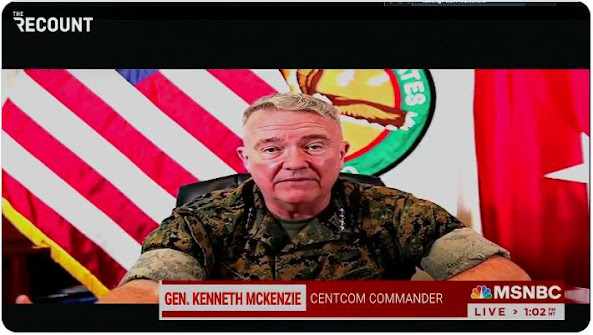 7 Kids
McDill is, by my measure, an hours ride from here.....
I have never so wanted to punch a motherfucker in the mouth.
Even worse  than anyone in the current shytteshow fucktarded land of the District of Criminals.   You can't fault a filthy pig for being a filthy pig... It's in it's nature.

According to the Uniform Code of Military Justice via the Manual For Courts-Martial:
§918. Article. 118. Murder Any person subject to this chapter who, without justification or excuse, unlawfully kills a human being, when he— (1) has a premeditated design to kill; (2) intends to kill or inflict great bodily harm; (3) is engaged in an act which is inherently dangerous to another and evinces a wanton disregard of human life; or (4) is engaged in the perpetration or attempted perpetration of burglary, rape, rape of a child, sexual assault, sexual assault of a child, aggravated sexual contact, sexual abuse of a child, robbery, or aggravated arson; is guilty of murder, and shall suffer such punishment as a court-martial may direct, except that if found guilty under clause (1) or (4), he shall suffer death or imprisonment for life as a court-martial may direct.
OR
§919. Article. 119. Manslaughter (a) Any person subject to this chapter who, with an intent to kill or inflict great bodily harm, unlawfully kills a human being in the heat of sudden passion caused by adequate provocation is guilty of voluntary manslaughter and shall be punished as a court-martial may direct. (b) Any person subject to this chapter who, without an intent to kill or inflict great bodily harm, unlawfully kills a human being— (1) by culpable negligence; or (2) while perpetrating or attempting to perpetrate an offense, other than those named in clause (4) of section 918 of this title (article 118), directly affecting the person; is guilty of involuntary manslaughter and shall be punished as a court-martial may direct. (Bold Mine)
I'd say that at the very least he just confessed that he was responsible for the if not murder then MANSLAUGHTER OF 10 INNOCENTS.
Reason for my absolute HEAT on this?
Did he resign?
Nope, Not yet. Doubt he will until he gets that Paid-Big-Money Job with CNN and/or a Defense Contractor... he's going to be the designated fall guy.  Considering just who HIS boss is? (hint, he's a Chinese owned Traitor... no...no, not the retard, the fat guy with "hu-whytte-rage complex"... that fucking guy?  I got a better chance of being named Pope than that motherfucker referring charges at his co-conspirator.)
Any -mention- of Charges or an Investigation by JAG?
Nope
Anything at all besides the usual bullshit platitudes?
Nope
Mealy Mouthed Dough-faced Corpsefucking Douchesucking Anus-Looking Can't Cunt Non-Commander Fucking Maggot.
GRRRRRR.....
Hell, if things are the way they say they are (and we know they are, the Drone Strike was ordered if not by the (p)Resident The Dementor-in-Chief, Emperor Poopypants the First, Chief Executive of the Kidsmeller Pursuivant, Good Ole Slo Xi-Den, well, I'd say this's HIS "Clinton Wag The Dog" moment, 'cept they fucked up... there were witnesses left to show what really happened.... Fucking amateurs... I purely hate amateurs.  If y'all remember, Clinton got caught with his wang in a "Cigar Box" named Monica, and what?  The Sudan, a Tylenol factory of some shit took a bunch of million dollars worth of Cruise Missiles as a 'distraction' from the Philanderer-in-the Oral-Orifice 'tuna surprise'... Same went for (p)Resident Emperor Poopypants the First, Slo Xi-Den had shit go completely fucking sideways resulting in 11 dead Marines, 1Soldier and 1 Navy kid... so what to do, what to do?
"I know!" said some gormless fucking faceless goon, "We'll use a Hellfire, and we can say whatever we want!  Who'll ever find out?  No one will ever know!"
Good job there Skippy... the security camera on the neighbor's house put lie to that shit like instantly... add on that they utterly refused to name the "Top Tier Terrorist that they know was planning badness" for like days after, not because it was a secret.  Nope... they -knew- the second they named a name, the Taliban would've moved hell and high water to produce the said-supposedly dead guy on camera to further flip off the fucking retards...  Now we know it's 'cos they knew it was a bunch of innocents...  So Now?  They gone and got done in by essentially a Ring Camera.
Absolutely goddamned brilliant boys.
So, my deeee-lemma.
Do I risk the DotMil retirement and getting banned on DotMil posts to go over and coldcock this sumbitch?  I really want to.  I want to punch this motherfucker so bad.  He's a small man, both in stature and size (never mind honor, decency and I dunno, humanity?) I could Hulk this motherfucker into itty-bitty pieces.  Guys like this are the shit-stain on the underoos of the Marine Corps.  He gives the Crayon Kids a really bad name, Just as Milli and Vanilli do for the US Army...
He took responsibility for murdering 7 kids for fucks sakes.
And offers bullshit platitudes and apologies.
I want teeth
Dammit.
<Le Sigh>  Wifey said no.  She read this as I was typing 'cos I'm beating another keyboard to death... I type HARD when I'm heated... I keep at least 3 spares around... they don't last long here.  Anyways, she read it  over my shoulder... said if I go to McDill, she'll file for divorce.

Twice in 2 years?  Hard Pass.  Shit.  I'm whipped I swear.
Used to be a time when the rest of the World looked to our soldiers as Saviors.
Thanks to Slo, Milli and Vanilli, and an asshole like this?  Notsofuckingmuch anymore.
Damn
And I -can't drink... the new meds literally make it poisonous to drink.
<Double Le Sigh>
More Later I Remain The Intrepid Reporter
The Seriously Restrained Big Country Posted by BigCountryExpat at 9:57 PM