Back in the Saddle and Various 'Stuff'

Greetings Me Droogs N Droogettes!
'Nother day, 'nother dollar.  Gainfully employed, and -still- waiting on that first paycheck.  Hate HR man, they -never- seem to get it 'right' the first go around.  Me W-4 couldn't be submitted, as the online account was acting squirrelly.  So, I =foolishly asked= "Can I just hand-jam one and scan it and email it to you?"
Nope.
No way...
Soooooo Ticket submitted, and fixed last Thursday, JUST in time to miss the pay window.
Yep...
So, been 'skimming' the news today while bored out of my skull.  Seems that the "Mu" variant is noow the 'hot topic'.  Thing is though, no one, from any source anywhere has ackchully shown how they know the difference between 'strains.'  IMO at this point, these fuckers are just making shit up... keep the fear porn flowing.
But it's coming to a halt.  Shortly.  Everything that's happened thusfar has followed my OODA outlook.  Still can't put a direct date on it, BUT historically, we got a lot of 'marker dates' coming up in the next couple of weeks, hell, days if 9-11 is going to factor.  Right now, I give 9-11 a 25% chance of spicy... it's just -too- pat a date to have shit go cray-cray.  Only thing I think that would be notable is what the current Nomenklatura that've taken over our country have planned vis-a-vis the "20th Anniversary".  They  had planned on the 20th having a big to-do in Affy, probably trying to do what the Russians DID do, which was a photo-op of '...the last man leaving, on the exact twentieth anniversary' yadda-ta-yadda-ta whatthefuck evvar.
Guess the Tallybananas kids done went and fucked that ALL up Aye?
Good on them.  Mad Based donchaknow? 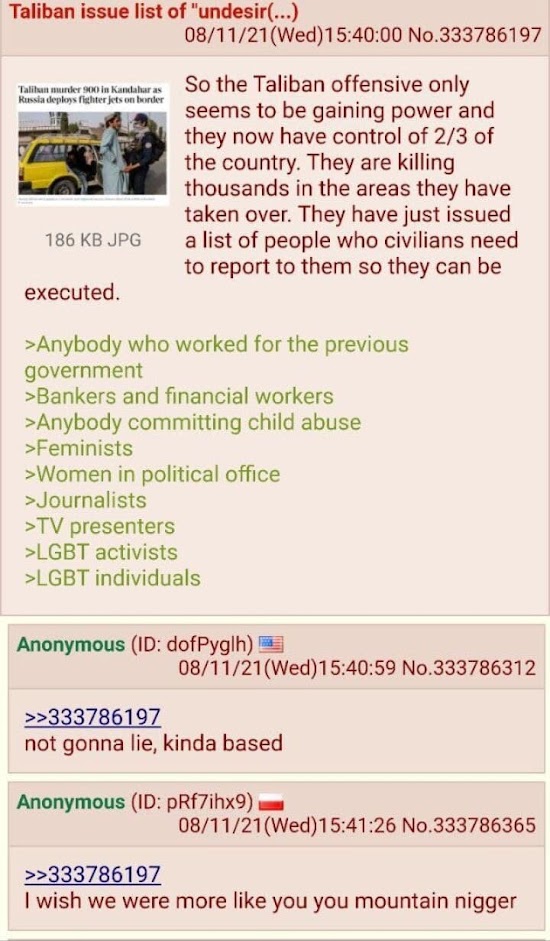 This's one of the many poasts on the Chans that the Leftiod Ministry of Propaganda flipped the ever-living fuck out over.  Apparently the fact that it's a bit of a humorous 'wish list' of what we'd like to see here in the Estados not-so-Unidos.  Hence the "Right Wingers and Trump are the 'Murican Taliban!!!"
Geez... what a bunch of fucking pantywaists.  IF -we- were anything like the Tallybananas kids, we would have already started the party.  Fucking morons.  It's apparent we got a lot of 'other shit' going on than to be worried about them... Entropy is a bitch, but it's also your Fren.
Let the whole system s-l-o-w-l-y melt down.  Hell, They're doing a great job of being self-fulfilling accelerationists.  Hell, almost Arsonist in their shit as of late.  Why do anything other than sit back, stock MOR ammo AND popcorn, and let the whole thing melt the fuck down.
Now, other things:
A BIG Thank you AGAIN to ScouterGreg for the unreal donation, and yeah bro, order is in, and Wifey is thrilled.  As well as a GIANT thankee to Maritime Man for his kindness.  Man, I can't thank y'all enough.  I'll be a bit prompter in getting the mail out... the guts are still a bit whacked... but getting better.  A few more days and I should be able to risk getting more than 25 meters from the latrine LOL.
Then questions asked:
One of y'all asked me about reflective IR proof covers.  Now, I can't speak as to the leg side of this, BUT I did get many moons ago a heat reflective/waterproof/reinforced tarp.  It's a monster sized 'survival blanket'... now, not sure as to the whole 'reflecting/trapping heat' and IR protection, but it's silver lined with a thick covering.  It's made by Arcturus.  I got the XL 'Survival' Blanket.  I got the XL as I wanted one that was BIG.  8.5 feet by 12 foot.  Added a bag o'bungies from the Zon, and I prefer the Big hook quality bungie cords.  I get the extra long length for those as well. 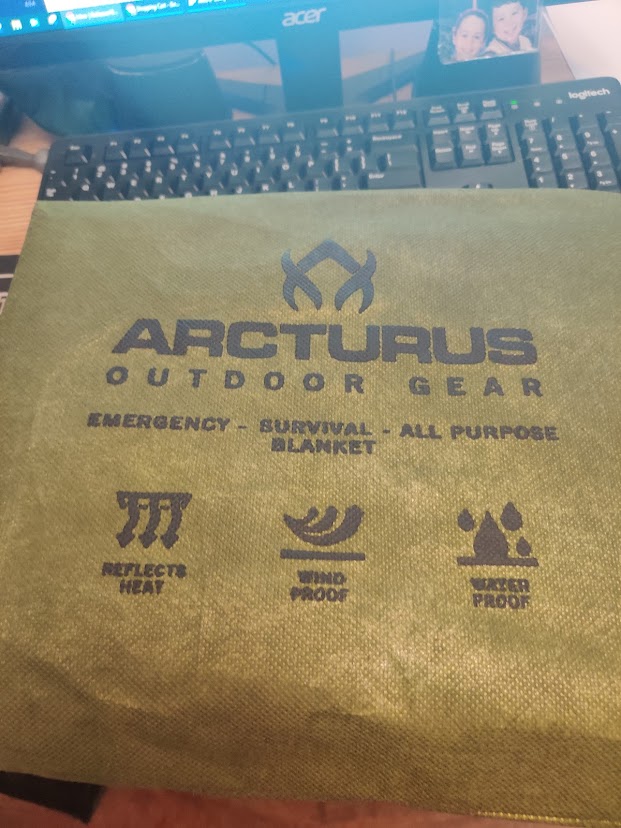 It's -supposed- to open up, and make a tent like this: 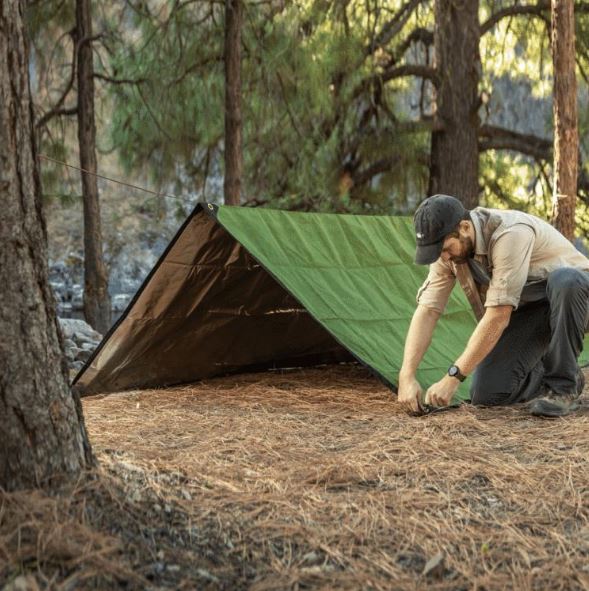 Once, long long ago, when I was a green grunt, we used our ponchos to do that.
Beat the shelter half to hell and gone...
However, I never used 550 cord... that was a trick taught to me a ways back.  550 when it gets wet can stretch, causing sagging.  Bungie cords, provided they're in good shape make for a far superior tensioned overhead cover.  Maybe one of you high speed folks out there can tell me if that blankie would block IR or not?  I got it XL also because it covers my entire Putt-Putt.  Figure if shit gets -that bad- and I have to bug out to a woodline, having something to cover and conceal the Putt-Putt might be a necessity.  Now, the package as you see is on the largish side.  I've stowed mine in the car, as it's waaay too big to hump.  1 foot by 2 foot by 8 inches thick, and I -know- when I pull it from the bag, it sure as hell ain't re-folding nice and clean and going back in the bag.  That's what the velcro stowage straps I made for it are for.
Which leads me into ANOTHER subject:
I'd be getting this 'stuff' whilst you can.  In my case, It's because I generally have to 'customize' my gear.  My web gear and battle belt doesn't fit off the rack.  I wear a 4XL-L t-shirt and finding 'stuff' off the rack is next to impossible.  So I lern't to adapt and improvise.  Hence I got a bunch of 'stuff' to build myself some webbing/extensions and whatnot. 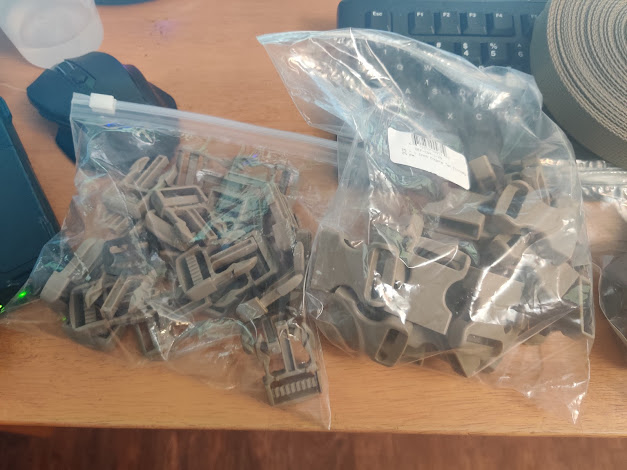 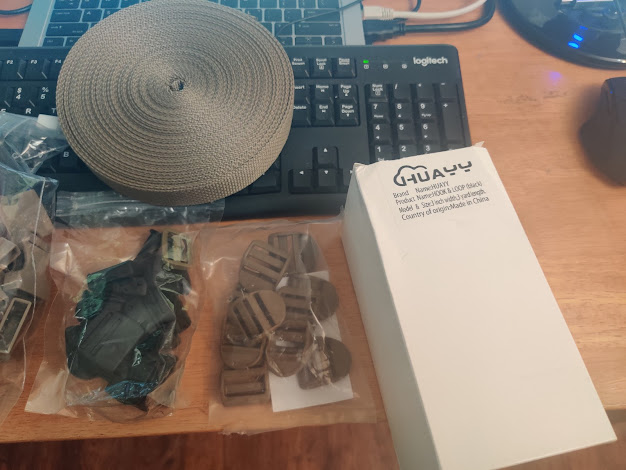 Bag of 25 snap-buckles, friction locks of various 'flavors' and a roll of khaki heavy duty polypro nylon 1-1/2  webbing.  The white box has 'his and hers' velcro (meaning both sides) that's 3 inches wide.  You can cut to size it.  And for $25 on the 'Zon you can get a lil baby sewing machine that'll (with a LOT of patience and the right needle) that'll sew all of that 'stuff' together.  Now for thread, I use dental floss, and then color it in with the appropriate sharpie.
Dental floss has literally never failed as a thread for field repairs.  In fact I had uniforms wear out before the dental floss holding the buttons on did.  After I got taught -that- trick by an old-old NCO, I ALWAYS replaced ALL the thread on my b-doos with dental floss.  So, for whatever reason, I can't link the 'stuff' thru the Zon, so this's not earning me a dime.  Same for the Arcturus stuff.  Just passing on good stuff.
Fact is it's helping immensely with fitting out my kit(s)
So let me know what ya think.
More Later I Remain The Intrepid Reporter
Big Country 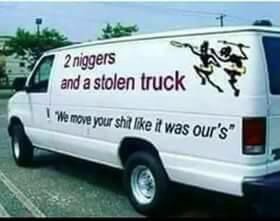