A Case of Waiting

Greetings Me Droogs N Droogettes!
Now, it used to be that the only country known internationally for it's pugnaciousness and attitude besides 'Murica was Australia.  Oz was an is a location  that's always had a bit of allure to me.  The far East and Oz are still on my bucket list, however, I'ma thinking it's not happening in this lifetime unfortunately.  Now, Oz, like the Untied Statz, was made up of the Euro-rejects of the world.
America was the religiously intolerant that shipped over here, the Pilgrims and Puritans, man, a bunch of seriously uptight fuckwads...  no-one wanted them uptight assholes, and can't say I blame them.  Puritans literally thought buttons were tools of the devil... they had laws against wearing short sleeves... Celebrating Christmas was a no-no.  A real fun bunch of folks Aye?

Then you have the Catholic settlers waaay down south... Little known history of early 'Murica, the Catholic Spanish and the French Protestants and Lutherans used to slaughter each other whenever they came in contact.  Theoretically, and by the 'kumbaya' bullshit taught is schools, the U.S. was founded as a bastion of religious freedom.  IRL?  Notsomuch.  Reality was Massachusetts Bay Colony was a theocracy pretty much. Everyone else murdered each other regularly over "who's invisible man-in-the-sky was better."  Either way, most of the folks who came here came here because they wanted to be religiously uptight assholes who no one in Europe could stand.
And Australia?  Well known as a penal colony.  Got some family shipped there I believe...  a cousin who was like 12 who stole a loaf of bread.  Really nice guys them Brits...  Sent a shitton of criminals to either die off or build a colony.  England literally DGAF.  It's like Mother Nature or God took a remote chunk of land, and said, "Yannow, some of the shit that I made is just too dangerous to have people around... I'll stash them waaay off for safety's sake." 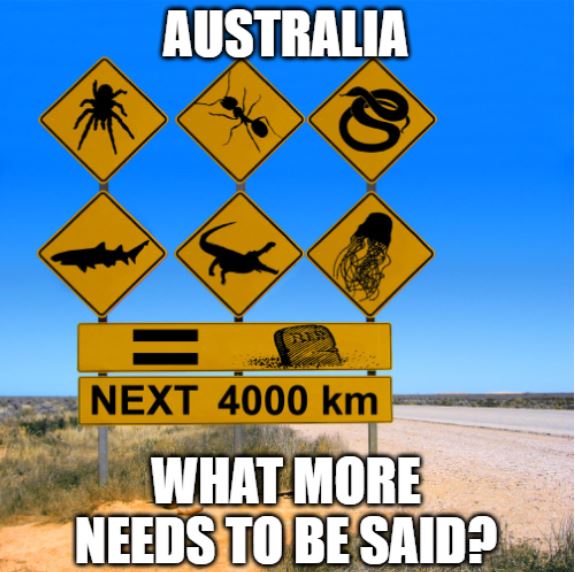 Literally a Murder-Continent.  I mean even the lakes in Australia... land locked lakes have Frikkin Sharks in them, (BTW: I can neither confirm nor deny if they have Lasers on their heads).  I mean for the Brits?  Win-Win... ship off the criminal undesirables, and let 'em either sink or swim so to speak, however swimming is highly inadvisable as the Great Whites surrounding the entire continent preclude most days at the beach, never mind escaping.  I mean the cachet of Oz was always that these people there were the survivors of a real-life 18th Century "Survivor: This Place Will Fucking Kill You" series.
Tough?  Sheeee-it.  Remember them Fosters Commercials from the late 90's?
4 Minutes, some funny, some Meh.  It's missing my personal fave, which showed some dude standing there, and a giant assed boulder falls on him... he gets mashed like fucking flat... and you hear a muffled "Ow." from under the rock... The announcer goes: "Wimp."  That one stuck out in my head over the years.  Now, in Iraq, I partied with the Australian Army... Man, do not mention Fosters to them... apparently that stuff is like worse-than-Bud-Lite to them.   A MASSIVE insult to call it "Australian Beer"  The stuff they had sent?  (Yeah, fucking Diggers could drink, bastards, hence why an invite to the Oz-House was a coveted prize)  They had Victoria Bitter or Cooper's.  Those are apparently -the- real beers that're drunk down there.  By the fucking gallon.  In one sitting.  Drinking Aussie beer, you learn quickly NOT to be known as a 'two-pot screamer' as I lern't that's what a lightweight is called... not me mind you not for nothin'...
So, anywho.  Something, somewhere, some time ago it seems, Australia got neutered.  I think it started when they took the guns.  The Port Arthur Massacre in 1996 which 32 people got whacked caused them to crack down and essentially outlaw all the firepower.  No, not for nothing, couple of people over the years said this was a False Flag.  There's a lot of evidence, best rallied up here:
http://www.whale.to/b/wernerhoff.html   If you're bored, it's TL;DR but very enlightening

Also, WikiLeaks has some stuff on it too, so it looks like it was a FF, but for now, I'm just going over some of the shytte that's happening RH-RN.  But historically, since they took the guns, Oz was then subjected to an insane level of Super-Political Correctness and Feminism indoctrination.  Like a complete emasculation of the country.  Reading reddit and the news from around the world, Aussie women seem to be the most mind-bent, insane, fucked-in-the-head group of Wahmens out there.  A lot of them are stone-cold beauties, but OMFG, the level of danger/crazy is off the charts.
So go the Wahmens, so goes the Country
“Hard times create strong men, strong men create good times, good times create weak men, and weak men create hard times.”  Oz went full retard.  Never go Full Retard.
But
There is hope.  The heads of each State of Oz has imposed soooo many draconian lockdowns and stupid, the people are fed-the-fuck-up.  And the other day, Saturday, they protested, and the fuzz did what reactionary politically controlled pigs do, they laid the smackdown 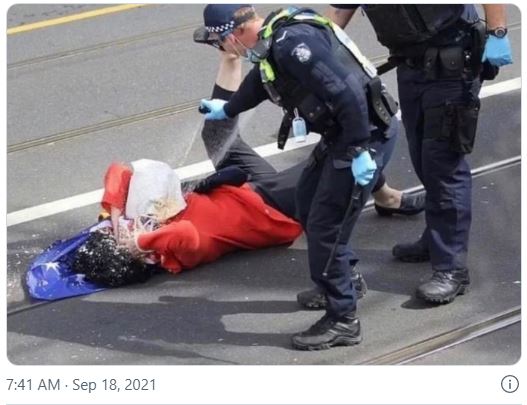 O a 70 year old Grandmother, who they pushed down and then hosed the shit out of with pepper spray.
AFTER she hit her head -really hard- on the concrete.  The Victorian Police: "We'll protect the ever-living shit out of you, because COVID and reasons"
Sees that the fuzz over there for some time have been enjoying their 'Trustee' powers over the population.  Running MAD roughshot over the people.  What I've seen is they purely love the power, and the asshole commie running Victoria, now known popularly as "Chairman Dan" as also been enjoying his emergency powers.  BUT
That may be changing.  Seems the largest labor union in Victoria, some 70,000 heavy construction workers, well after the vidya of Grandma getting the beat down/hosing (brilliant BTW to use something like cop-strength pepper spray on elder folks that can fuck up their breathing, when yannow, the main killer of COVID is usually caused by respiratory issues? On the highest risk group an old lady?) The Labor guys?  They went to the Union Hall to protest, 'cos Dan Andrews, by way of his "Chief Health Occifer" mandated that ladi-dadi-evvabody in Construction gotta get the Notvaxx by today.  And man, they were pissed.
Vidya and Story Here: https://pushingrubberdownhill.com/2021/09/20/australian-construction-workers-riot/
As the article said, the Union has been donating millions to "Chairman Dan" and his, of course, Labor Party, and not getting anything in return.  Which, unlike the Untied Statz from what I can tell, at least here?  When you buy a politician, they tend to stay bought.  Just ask "The Big Guy" amiright?  So, for a troubling 'lack of return on investment' so to speak, the Union went apeshit.  From all reports, the Union Leadershit browned theyselves silly, and issued some mealy-mouthed bullshit statement, knowing they're dead men walking, and then "Chairman Dan" dropped the banhammer, and shut down the means for these guys to work, which man, give it two weeks... no paycheck, no work, then no food?  Hoo Boy.
Got a hunch it's going to be, as I call it "The Waiting Game."
Ten to One odds that IF they had their firepower, we'd be seeing "Ned Kelley" redux allll over the place.  So, Oz is 'Waking Up'... leastways I hope.  Here in the Untied Statz?  Not sure.  The things I'm hearing -right now- is that it's all quiet on the fronts, for now.  Eye of the Storm.  The Notvaxx news broke with minimal coverage, but that that did break?  Well a few normies woke up.

They're confused and puzzled.  the people behind the scenes are confused as well, as they're not sure which way to go.  The Branch Covidians that they 'riled up' have taken this shit as a religion, and now?  Because of their low-IQ 'follower' mentality, well, the Karen are gonna really be pissed at the Management this time.  And when those 'types' of people go in, they tend to go all in.

It's sort of like a retarded dumbass Lieutenant, who, despite the Platoon Sergeant's pleadings, led his platoon into a fucking minefield.   Couple of guys have bought it, and the rest of the Platoon are now looking at the LT from behind, probably debating on whether or not they can get away with shooting the stupid cocksucker in the back?
So yeah, it's like the Phoney War in WW2... 8 months of no major action
We'll see.
So, keep prepping
Head on a swivel
Be the Gray Man
More Later I Remain The Intrepid Reporter
Big Country 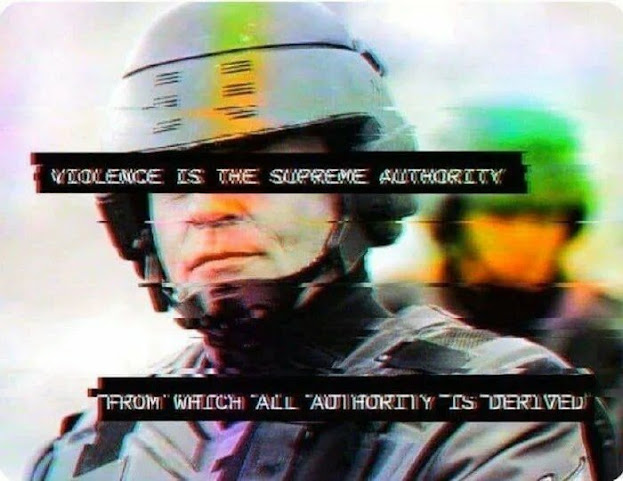