Greetings Me Droogs N Droogettes!
Again, another sleepless night.  GranBebe was up at 00:45 after I had just closed out last nights blegg, and gotten horizontal... I was calm, but man, she just would. not. sleep.  She's -theoretically- down for a nap right now, but I ain't holding my breath.  She also got up at 0300, and then told go back down, and was up and running at combat speed at 0715...
Told Wifey "This's alll you."  I just got up myself but am all out of it and funky feeling... two nights of jacked sleep patterns at my age?  Double Sucks Ungood.
Todays round up:
Equipment left behind and one of the better trolls that the Tallybananas Kids have done so far
I say so far, because man, whoever they got on their social media/troll team are purely kicking ass and taking names.  Today's "Fuck You Because We Said So" is the re-enactment of the Flag Raising of Suribachi on Iwo from back in the day: 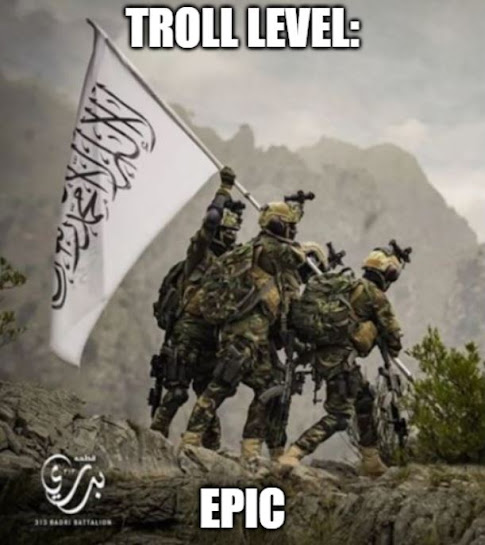 My label but their picture.
Talk about Maxi-Epic Trollage
Gotta be some savvy 14 or 15 year old kid working for them who was living in the city or something with a 'net and 'puter hookup.  I sincerely doubt it's the fighters or leadership with this mad-skillz going on.  Which just shows -how much- they've adapted, improvised, and fucking won.
<slow golf clap>  Well Played Mr. Tallybananas, well played indeed
Then, we got the rough-cut of the equipment left behind (h/t Eatgrueldog):
19 x A-29 Super Tucano close air support attack aircraft
10 x AC-208 attack aircraft
4 x C-130 Hercules transport aircraft
24 x Cessna 208 utility aircraft
18 x Pilatus PC-12 Special mission wing aircraft
95 x Mi-8/17 transport helicopters
8 x Mi-24 Hind attack helicopters
10 x UH-1 Huey helicopters
68 x MD530F light attack helicopters
158 x UH-60 Blackhawk helicopters
55 x T-55/62 main battle tanks
8500 x Humvee’s
634 x M1117 armored cars
173 x M113 armored personnel carriers
155 x MRAP armored cars
1000+ mortars
150 x D30 medium range artillery pieces
104,000 x M16A2 rifles
10,000 x M4 carbines
Damn...
That's a huge amount of shit...
104,000 Musket M-16A2s?  Wow... now I know where the DoD was dumping the full sized rifles when they went over to M-4s all over the place.  Now as far as the other 'stuff?'  Only thing I see on there that would maybe concern me is the Pilatus PC-12 Special mission wing aircraft. Those are, for the most part C.I.A. spy planes, usually chockablock stuffed with the -best- intel gathering shit out there, in it's most compact form, as the plane itself is really really small.  Joe Chink probably already has all the specs, if not all the chips (as they are the ones who make that stuff FOR us... we really are that retarded aren't we?) that're in the thing BUT it's a different thing when you have 18 of them to fuck around experimenting with and reverse engineering them.  NOW they can afford to pull them apart and do what needs to be done.  The 4th or 5th gen night vision FLIRs... man, whelp... no use crying over spilt shit.
Because the risk-Adverse fake and gay Gen'ruls and Bureaucrats sure as hell aren't going to do shit except "Monitor the situation" and "Write strongly worded demarches" 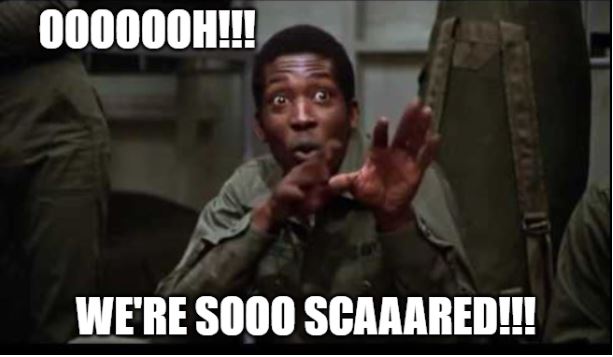 Man, we are so screwed.
And the cluelessness of the coterie surrounding these idiots?  Yeah, notsomuch.
Brainless, Clueless and Rudderless
I say Leaderless as well...
Which is why things are completely buckshot wild stupid, contradictory and without any sort of real-time idea of just what the fuck was/is going on.  The three tiers of the Deep State, careerist bureaucratic guys like that fat retard Vindman and his ilk, the DotMil side, with the Joint Smoking Chiefs of Stuff being THAT side of the dime, and then, the Intel/State Apparatchiks who're all vying for the 'power position', BUT do not want any of the responsibility of the grand strategy failure that's unraveled in front of them.
Bet they're wishing OrangeManBad was still around Aye?
But that ship sank a while back... now IF they'd done this even sooner they might have been able to throw it on OMB, but it's fucking August.  OMB stopped having any -real- blame for this shit when they trashed the May Pullout that everyone agreed on.
So, my call maybe is that Slo's gonna check out.  They can't do a 25th.  No way, Same with Impeachment.  That's strictly a republican't thing... so Slo is gonna die from 'stress related issues' or something... catch the blame for the fuckups, thereby preventing any career-damage to the scumocrats, and then be made into a Martyr and "how dare you question his valiant attempts in Afghanistan, he meant well!!!!"  And, depending on how they want to play it, Chair Farce Two: The Happy Hooker Express might experience a crash and burn while on the way back from the Nam... I mean hell, her plane back on June 6th of this year had to do a quick turnaround and emergency landing... 'member that?
Dry Run mayhaps?
Wonder if she's on the same plane?
Time will tell.
So, More Later I Remain The Intrepid Reporter
Big Country 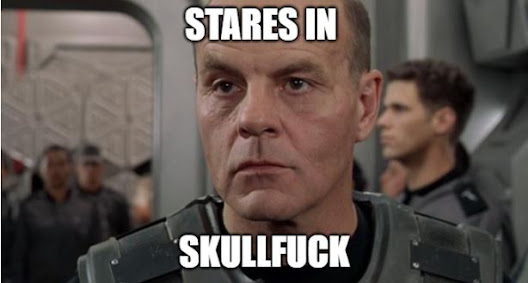 Posted by BigCountryExpat at 1:58 PM