Greetings Me Droogs N Droogettes!
Sweet Jeebus (and yeah Large Marge, I'ma tryin').  But Oh! How I need wings to stay above this bullshit.  NOW, only NOW does "Tater Joe" suddenly and magically blow'd the fuck up the 'mastermind' behind the Kabul ISIS-K bombing? 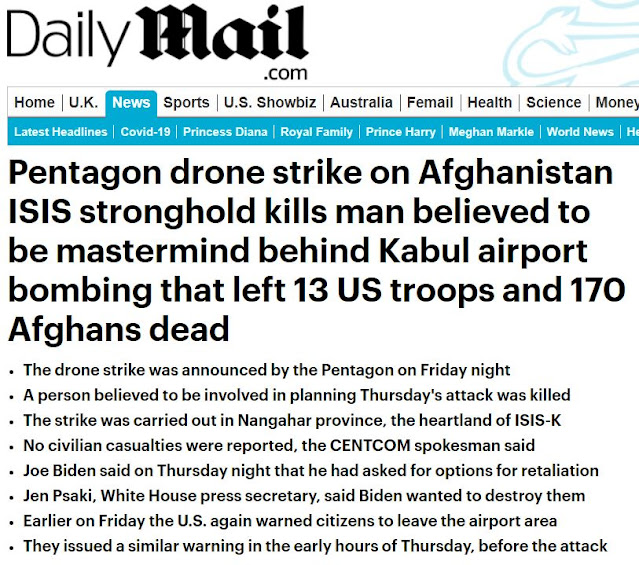 Wow... just that...
Wow.....................
'Cos do I doubt that they droned the ever living fuck out of -someone- in Nangahar province?
Nope
Do I doubt that dood was prolly Tallybananas oriented?
Nope
Do I doubt that they blow'd up the right dood?
Oh hells yeah.
If they really wanted to blow up the dood responsible for the Kabul Bombing, then Langley'd be a smoking hole in the fucking ground about now.  Pro Tip assholes;  You're so transparent, so thin at this point, man, -you're- worthless as far as any real-time intel/actionable intel goes.  It's done.  You're done.  Most importantly we're done.
Y'all 'shot your wad' like a bad porno movie.
Got a hunch that some poor sap in Nangahar was sitting, making hummus, whatever, and he -might- have heard the >foosh< on the missile inbound before it hit.  BUT
That's if they even actually shot a round off.
'Cos at this point, without vidya, certified statements, fuck, even doodz fingers/ears/something, as far as I'm concerned the DotGov is MOAR full of shit than GranBebe denying that she stole some M&Ms out of my bowl when I literally caught her red-handed.  (She did, I caught her, and she still lied to my face "No Papi I no steal, Gigi (wifey) said I could have some M&Ms" LMAO... got to love her)
OK: Reality Check
ISIS, no matter WHUT the name (Currently the 'K' Model... what the fuck is up with this current crop of asshole's fascination with alphanumeric identifiers?) is a CIA created, sponsored and funded Creature that ostensibly was born, raised and fed under the Red Diaper Baby, the traitorous Obamamessiah.  His filthy nasty homosexually-oriented Paki-loving cockgobbling self is responsible for them, and every thing they do.
Seeings that when OrangeManBad took over, and utterly fucking -crushed-them like the retarded Islamic Pedo-boy-and-goat buggerers they are, isn't it fascinating, that a group that we've had ZERO TROUBLE WITH IN LIKE FOREVER (Under OrangeManBad)

That they Suddenly and Stunningly struck at our valiant but overwhelmed and under-supported troops?
JUST in time to have all the 'Usual Suspect" Neocons (mostly from the (((Tribe))) mind you, Jes' Sayin'... don't like it, tell them to stop fucking with us... shady is shady, whypeepul shady ain't no different from Jewpeepul shady, 'cept whypeepul seem to get the stick, shitty end, type one each on the reg, and the Jews skate...)
Which then makes a thinking man go "Hmmn."
So, lets get this right:
1) The Tallyabananas kids took over... like OVERNIGHT

2) Tater Joe and ALL the 'other' fucktards got caught with their collective cock in hand.  No hiding it... They got Publicly Shamed.

3) Instead of 'doing the Spike Lee', they blamed OrangeManBad, circumstances and hell, even global fucking warming.  No one stepped up and fell on the sword as expected, 'cos no one wants to admit that Tater Joe -is not nominally running the show-  That line about "I was instructed to..."  Are you fucking kidding me????

4) When it became apparent that Tater Joe and the rest of the fucktards weren't doing the job right, instead of doing what is called for, ie. calling for heads, assigning blame and resignations ALL over the place, along with some court martials as they so richly deserve, they:

5) Doubled down on "fucking stupid" and, with the blessing from the Neocon (((Conservative-Permanent War Party))) had a CIA Asset go and kill a fuckton of folks, kill a bunch of innocent US Marines and 'other servicemen' (I think one was Navy) in the hopes to INFLAME the nation into restarting the whole fucking shebang again.

6) They expected everyone to get on board

7) But it ain't working
They shot their wad... they don't get it.  Jingoism, patriotism?  Nope.  Done.  They burned that particular house to the ground over the past twenty years, and only recently salted the fucking earth with this current fucking debacle.  Hell, they shitcanned a TRUE combat leader who livestreamed that Higher-Higher stepped on their collective cocks, with golf shoes, and no one stepped up to say "Hey, we fucked up."
A Marine Light Colonel.. 17 years... career combat leader.
Shitcanned
Fraggings and Mutiny have happened over less.
OhBoyohboyohboy... as Charles Bronson would've said years ago....
The "Overseas Bloody Bucket Gambit" failed...
Next step: FBI-Run CONUS Terror-Attack Black Flag

Mark my Words on that one.
Two Weeks max.
Hopefully I'm wrong, but it's apparent that Tater is faltering hard, no one wants the whore in there, and shytte is out of control.  If OrangeManBad was still there?  He'd already be in jail.

Fucking cowardly legislative branch...ALL of them need to be impeached/fired.  ESPECIALLY the ones who impeached Trump over a fucking phone call... that shit seems purely fucking trivial now donit?  Fuckers'll never learn... til they get confronted.
Head on a Swivel
Avoid Crowds
Buy MOAR everything, as the budget allows.
More Later I Remain The Intrepid Reporter
Big Country 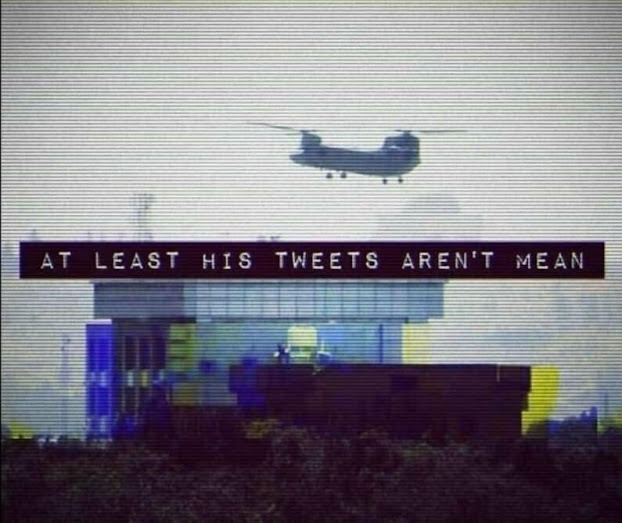 Posted by BigCountryExpat at 1:37 AM