Greetings Me Droogs N Droogettes!
Ahhhhhhhhhhhhhhhhh... a night in me own bed.
Heaven.
Woke up only a few ago, the four days of only 'sorta-kinda' sleep left me out of it.  Wifey is still currently snoozing and it's about 12:15.  I'm having a nice iced coffee, and reflecting on the small gratification of a really nice mattress.  That was Wifey's call back when she was just G/F.  Insisted on replacing the mattress that XBitcho used to sleep on.  Meh.  It's a chick thing I hanker.  Being a guy who's utilized every weird-assed bunk between Baghdad and Istambul and Kabul, I ain't picky.  However, all bullshit aside, this memory foam monster?  Oh yeah baby...
So, fully refreshed and operational.  Behind the power curve so's I figured to hammer out some 'stuff'.  Seems I might have been a bit more prophetic than I realized when I started talking about the Capitol Police becoming the American State Police.
The link is here: https://amgreatness.com/2021/08/08/nancy-pelosis-secret-police/
Seems people are beginning to wake up to the potential danger with these clowns.  RTWT. I called this a waaays back.
Not sure how "the play" is going to go, but I'm making a few calls.
In order for this plan to work, and for them to get full on STASI/KGB level powers, -something- is going to have to fail spectacularly.  As in a complete and utter failure of intelligence, and protection.
Now, this's not a FedPoast.  This's strictly what I -think- would nominally have to happen in order for Gin Hag Pelosi to gain full and unending control and install a socialist-democrat run Junta.  In no way am I doing anything but fictional prognostication, so all you Glowniggers in the back, shut the fuck up, sit the fuck down.  When we want your opinion, we'll ask for it
Right before we kick the stool out from under you AND your kin.
So, besides the "I ain't doing shit" 'cept some predictions:
Ah yes... these days cappin' a senate critter or congress critter, well, we saw it ain't that big a deal. Giffords, those ball playing dudes... lots of times -someone- tried to whack a Rep, and the overall reaction is a (YAWN) from the public... also the fact we got what? 545 Reps?  Kill a few, we still got plenty of spares and plenty of hungry go-getters in the wings waiting...
Jes' Sayin'
However, no one (besides the guy who tried to kamikaze the Clinton White House in 1994 story here, no pics available! https://www.baltimoresun.com/news/bs-xpm-1994-09-15-1994258205-story.html) has really taken a shot at El Presidente since Kennedy.
CORRECTION:   Will pointed out Reagan.  DUH!  Coffee hadn't kicked in... sorry bout that!  Either way, he had an (R) by his name so's the Enemedia didn't care except to sell papers back then... so to continue...
And if there was, well I got a hunch it depended on who the Prez that got shot at was.  'Cos I gar-ron-damned-tee that if anyone threw rounds at the Obamamessiah, the Ministry of Propaganda would never have spoken of someone mad enough or hating enough to kill their "Anointed One."  Now if anyone tried to off the Shrub?  Sheeeeee-it... it would have been front page news.  Hell, when some Haj chucked a shoe at him, it was front-page-news 24-7 for weeks, with the replay of him dodging said hoof-cover.
So, here's where it gets a bit dark and murky.
Slo Joe, A.K.A. Xio Bi Den ain't zigzactly 'popular' if'n you feel me.  Also, according to recent reports from Dan Bongino, a retired Secret Service agent who supposedly still gets intel (how valid is open to discussion) but the word is, and despite the Ministry of Propaganda, well hell.  Joe is Tater-Joe.  We can see it.  Fuck...  the lack of awareness by the media in their persecutions of Trump vis-a-vis his mental stability/acuity and the obvious and oblivious treatment of what is a man who literally mentally falling apart in front of the whole fucking World???  Jesus please.  I swear.  No more booze if you make things right.  Sorry, I get soooooo fucking frustrated.  Wifey asked me what I needed to stop being soooo angry and upset all the time... told her flat out "Without joking, if I could remove at least 50 IQ points, I think I'd no longer care as much."
Anyways... to continue.  Joe is going to have to go, sooner rather than later.  It'll be public.  It'll be huge.  It'll be the false flag to end all false flags.  Eeeee-vil Whypeepo Superpreemiecysts who've already been on the radar, by which in reality, it'll be an FBI stooge-fest of Glowies and Plants... 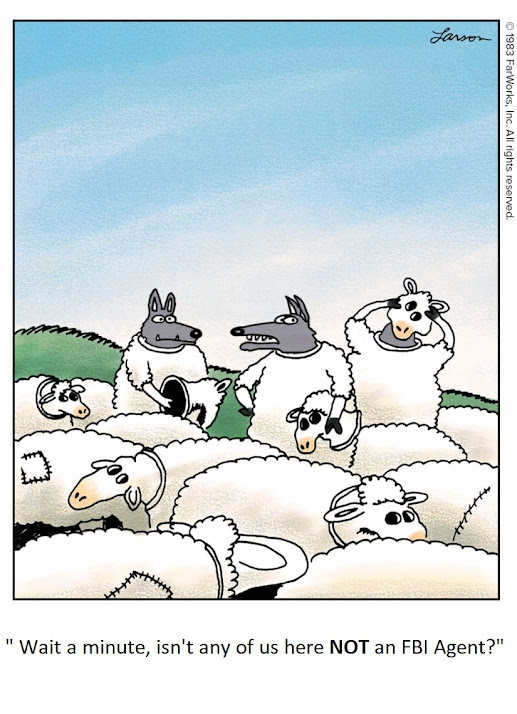 (A-polly-olly-geez to Mr. Larson)
But yeah, ALL the Eeeee-vil Whypeepo Superpreemiecysts will -somehow- get old Joe in for his permanent dirt-nap.  Figure Kamel-Toe-the-Hoe to get whacked too.  The Gin Hag wants to be "The One"...  Probably using Eeeee-vil Scary Black Rifles.  Bunch of kids will need to be whacked as well, so as to 'sell' the "absolutely critical right now ban of said Eeeee-vil Scary Black Rifles and if you don't then you too, are an Eeeee-vil Whypeepo Superpreemiecyst!!!"  The drama will be so-over-the-top that there'll be no escaping it.  And then, the finger pointing will begin....
"Intelligence Failures at all levels..." with the FBI failing to uncover (their own) plot
"Eeeee-vil Scary Black Rifles are military weapons-of-war, they need to be banned now!"  Figure they'll use Gin Hag Pelosi as she'll be "last whore standing" after the "incident" and use an Executive Order.  The Gin Hag has zero compunction in using absolute power whether it's constitutional or not.  Figure massive attempts at round ups of 'the usual suspects'.
They'll figure that the 'shock and horror' will be enough.  Then they'll stand down the FBI, and fold it into the A.S.P. and then they'll try to get a firm grasp of things.  Problem is, even if they do whack out Joe and the Hoe, well, hey, appreciate ya!  Saves us the trouble.  And rooting the rest of them out?  Not so much... 'Cos yer average Veteran and whatnot?  This's the sort of shit that'll get the kickoff started.  But because the live in a bubble of their own feedback and bullshit they have no idea what the real world is like, nor do they understand just how outnumbered they are.
Come at me bro.
What say you?
And yeah, I know... going to be lots of assholes here throwing comments and shade.
I don't know you, and you sure as fuck don't know me
Those who do know me?
Ask them, they'll tell ya.
I'm really slow to anger.  And when I speak of 'anger' I mean the bone deep level stuff... not petty argument 'I'm pissed at you' stuff, but the anger level where when I -do- ultimately hit it, I have literally had people run away in terror.  I'm very slow to really anger.   But when it does get to that point, it's on.
Thunderdome on.
Two men enter, one man leaves stuff.
Whew... sorry.. I get pissed.  AGAIN I had to delete a bunch of really shitty comments from fucktards.  Think the Glowies are trying to bait me, but it ain't happening.  I'm more frustrated than anything.  So, I'm off now.  Gotta hit the unemployment orifice and see what I can.  More Later I Remain The Intrepid Reporter
Big Country Posted by BigCountryExpat at 1:25 PM