Greetings Me Droogs N Droogettes!
Happy Monday!  Maaaan that takes me back... Quite a few years ago, there was a band called exactly that, "The Happy Mondays".  Late 1980's/Early 1990's band... good stuff.  Brings back other memories too, especially in light of things... School of Fish "Three Strange Days"...
We are most deeply in some "Strange Days...

Quick aside: Right before I re-joined Active Duty, I spent like ALL my nights bar-hopping all around Boston... One night there was this band playing at the Blackthorn Pub which was the place to go for authentic Irish pubbery so to speak...('nother aside...the fuckers torn down the 'Thorn!!!  I googled it and it shows as permanently closed and street view shows that the place has been torn down!!! >le sigh<...anywhoo, the band was pretty damned good, and the lead singer was a hottie... they did a cover of the tune above, but the chick didn't seem to know all the words (or she was hammered, she -was- pretty plastered) and I sort of started singing along with her, and she pulled me onstage for a improv-duet.  I ain't no great shakes vocally, but I -did- know that tune like backwards and forwards... we had a blast and I spent the night getting hammered up with the band...
Turned out that the band?  Later became "Letters to Cleo" which went on to some small fame...
Gotta say, I -do- have quite a few 'odd crossings' in my life...
But, back to the original.  Not going to go too deeply into the current sit-rep.  Especially since I've been hearing from lots of folks.  Information overload, and my personal OODA Loop is almost full.  Getting to the point I need a whiteboard to start tracking all dis intel.
And man, it's killing me because I absolutely have no one I can realistically discuss a lot of this stuff with besides Sapper.  And even then?  He don't have the clearances.  All I can do is say:

Keep your eyes open, heads on swivels and keep prepping.
AVOID CROWDS
Stay 'under the radar' as best as one can.
Also, I'd advise to keep a small bugout bag in your car for any time you leave the house.
I don't go to Publix up the street without my EDC at this point...
And if you're going to be a bit further out, make sure you have the proper stuff to E&E back to wherever you can, be it the house or a 'safe house'.  In my case,  I keep a pair of older, well-broken in pair of combat boots and two pairs of socks in the car, stashed out-of-the-way in the back.  At a minimum, make sure your footgear can git you to where you need to git to.  If anything, one beef I have with a lot of these other 'sooper-survivalist-preppers'  is they go, shall we say overboard in some of the preps.
Look, you're going to the grocery store.
You (hopefully) aren't going to be in a 'movement-to-contact' or 'run and gun' situation.
IF and in worst case scenario of a BIG EMP that 'cooks' your wheels, you pretty much just want to get the fuck out of Dodge quickly and quietly.  Now, if you DO have a 'survival wagon' such as a pre-1990 truck, you might want to have 'heavier defensive capacity' available, as -someone- might decide they want to hijack yor shytte.   Having the -only- running putt-putt in a 'fried grid' situation is going to draw a lot of attention.
Just like as I've talked about before.
Noise and Light Discipline
Scent Discipline (often overlooked)
Trash Discipline
Now, lots of 'stuff' already out there by far moar in-depth focused folks.  Noise and Light?  Yeah that Genny runs loud AF.  And keeping it inside is contra-indicated due to carbon monoxide.  Jes' Sayin'  That's where the solar powered bank comes in handy, BUT: Lights on when there ain't no other power?  Yeah, not a great idea to be the "Beacon Shining in the Night"...
Scent discipline can be the 'food factor'  Figure IF (or, as it seems to be approaching when) everything goes bugfuck nutz, gonna be a LOT of hungry folks, and I'd have to say that cooking up one of them rehydrated freeze dried Ribeyes where the whole starving neighborhood can smell it is generally considered a thing of badness.  You'd literally draw hungry, more-than-likely pissed off and agitated folks who are ALSO going to be armed and willing to kill yor dumbass to feed their kids than you want to deal with.  Best keep THAT in mind when we're still in the 'culling phase'

Same goes for going out and leaving the house... Intel is going to be -key- and that usually means physical intel... recon.  And believe you me, if we go full grid-down weirdness, even if you DO have a plan to be able to get oot and aboot, you do not want to be "Mister Clean and Shiny" freshly washed and laundered.  In Vietnam, the good recon guys ate what the VC ate (local diet) and washed as they washed so as to take on the 'scent' of the country and backwoods.  If -everything- has gone completely to shit, you do NOT want to be the overly-clean dood in a room full of dumpster-smelling refugees and hobos.

Trash discipline is critical as well as you don't want to be leaving those Mountain House cans and wrappers that proclaim "Dat mothafukka gots food!" to the Orcs.  You can be damned sure that people ARE going to be eating out of the trash and maaaan, You most certainly do NOT want to be 'that guy' who's throwing away MRE/Survivalist ration wrappers.
Again, OPSEC = TrashSec.

Be the Gray Man Aye
So, as I said, 'things' are moving
Not sure which way the levee is going to go
More Later I Remain The Intrepid Reporter
Big Country 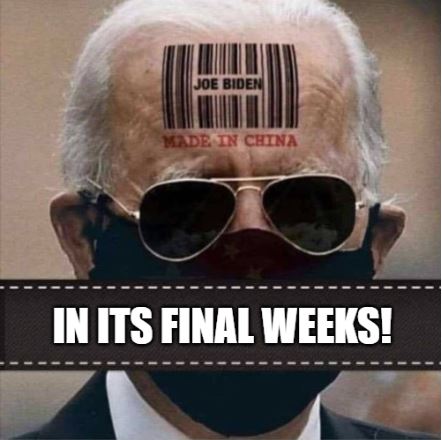 Posted by BigCountryExpat at 1:26 PM