Greetings Me Droogs N Droogettes!
Seems Vox Day, Uber-Sigma of his own definition finally pissed in the Wheaties of the Powers-That-Be.  His site on Blogspot is "under review" for "possible TOS violations"

If'n I had to hanker a guess?
Ole Voxie's been hitting the NotVax stuff pretty hard.
Mainlining it as it were.  I've noticed a direct relationship proportionally speaking as to -when- the Powers That Be come at you, it's usually these days related to the NotVax.  For a while, it was anything to do with the (s)election.  They positively had to because IF enough people really got it into their heads to get radical (i.e. for reely-reelz guns up/nut up/kill 'em all let God sort 'em out) and march on the District of Criminality, they knew their goose was cooked.  However, we just no longer give a fuck apparently.  Shit's over... recount?  Maaaaannnn that's some mighty strong copium there. 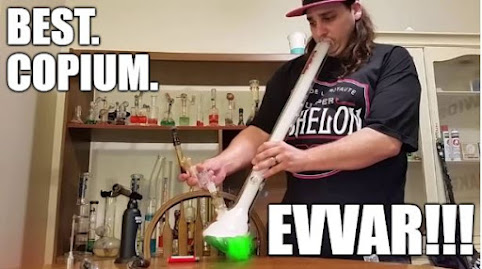 Shit's over man...
So now though, it's any negatives regarding the NotVax.
That's part of why I'm no longer gonna beat that drum.  It's also played out.  Your either going to, or not going to.  Your body, your choice. 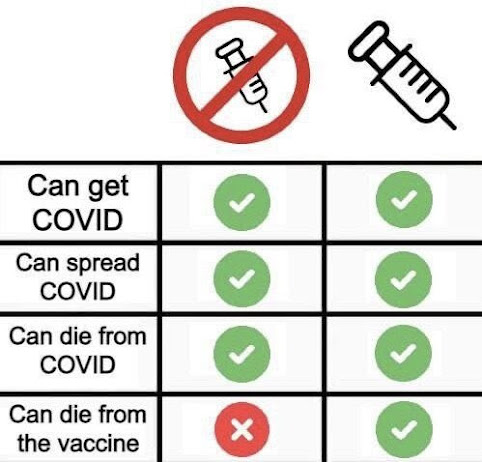 Everyone with an IQ higher than a Somali knows it's total bullshit either way.  The big question is how are they going to make their next play?
That's the million ruble question.
See, there's too much precedent regarding excluding categories of certain people
You're not allowed to do that!
Hell, the Leftist have made it into a fucking business model.
Race, Creed, Religion, Sexual Identity, Sexual Preference... you name it, if it can be categorized, it's prolly out there as a screaming meemie "You can't not let ---X--- participate/purchase/blah fucking blah!"
"Bake the fucking cake, bigot!"
Now, for academic purposes, add the category of "Unvaccinated" to the list?
Hoo-boy... they've sorta-kinda painted theyselves into a corner.
It's a stone bitch to reverse that much social engineering.  In some respects, it's got me more concerned.  If you utilize their Alinsky Approach, well, theoretically they have to play along.
Unless
They just upend the whole fucking table.  Which is what I'm seeing.
Too many twits tweeting disturbing shit which is not only being allowed, but being encouraged in the hive-mind. And that's what it is... right out of Science Fiction. The Borg.  Swarm intelligence, the collective behavior of decentralized, self-organized systems, natural or artificial. The apparent consciousness of colonies of social insects such as ants, bees, and termites.
If that ain't Twitter, then I don't know what it is.
Self-Re-Enforcing Dynamics that have no real basis in the real world.
They do not understand that.
Twitter is not the center of the Universe and All on it who are there are NOT the "Grand Arbiters" or Inquisitors with the sole knowledge of what is 'good' and 'right' in the world.  These fucking people are positively insane and they're taking us down with them.  I mean for fucks sakes, the Dorsey Fuck who invented and runs that shitshow?  He looks like the creepy pot dealer who's always trying to cop a feel off the hot chick for a doobie.  A real skeezy glowfag.  THIS is the guy who runs the hive-mind echo chamber?  A guy in high school who you wouldn't leave in your bedroom alone 'cos you just knew that scumbag would steal the cash out of your desk.
Shit like Twitter, after the smoke clears?
Got a hunch the words "social media app" will be enough to arrange a hasty lynch mob.
Which is what I see being ginned up now.
Too many famous and powerful retards are calling for motherfuckers to start shooting the Not-NotVaxxed. https://gunfreezone.net/congressional-candidate-in-california-wants-to-shoot-people-who-dont-mask-and-vax/
Miguel over at GunFreeZone found this particular coxsucker on twitter: 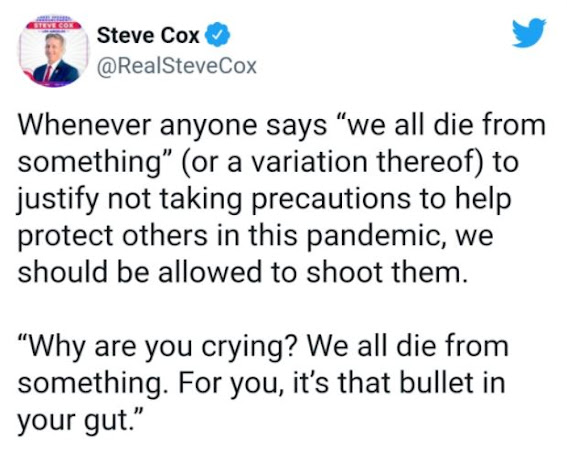 This
This from a fucking congressional candidate.
Who, by dint of his 'exalted and most high esteemed' status, is better protected than most folks.
Now, I'm well balanced...
Theoretically.
I'm a highly functional, and above all rational human being (again, theoretically)
Also, I have extreme PTSD as well as being now classed 'Unmedicated, Bi-Polar' by the VA.  North pole?  South pole?  I don't get it... anywhoo... there's a bunch more to my twisted shit that I could unpack, and even I know it ain't right to start calling for the deaths of a group of people like this.
'Cos -somewhere- out there, there's a guy veeeeery much like me
Who ain't so well balanced
Who -might- take the call to be shot in the guts over his NotVax status a bit personally
Who has the ability, the training, and the willingness to get sporty about it.
This shit is playing with fire.  They know it too.  They seem to think that when someone like the above described 'ain't so well balanced guy' rolls into Mr. Cox's house with a 12 gauge and slaughters him and his entire family (just to be sure) that then THEY can start the full on NotVax Konzentrationslagers and go-to-town to form their final Socialist (fr)Utopia.
Problem is, well, numbers
We got 'em
Not them.
Give me a Squad of hard-assed Rakkasan pipehitters, 5 M-240s, and three pallets of Ammunition, and I could (theoretically) clear out ALL of Beverly Hills Celebutards in 24 hours.  Not one stinking dink body left... the whole hills... it'd smell like.... Victory.
"Some day this's wars gonna end."
More Later I Remain The Intrepid Reporter
Big Country 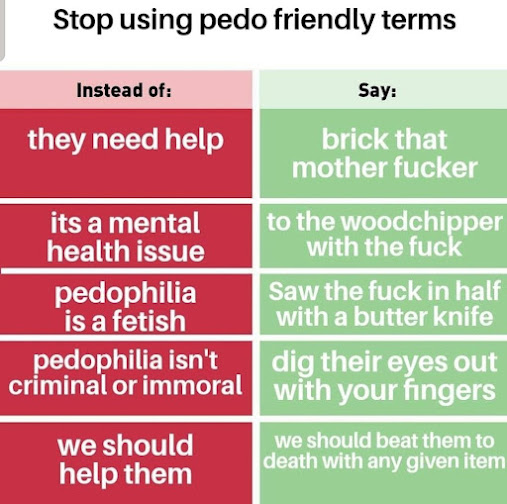 Posted by BigCountryExpat at 11:11 AM