Greetings Me Droogs N Droogettes!
Whelp, seems Xio Bi-Den and the Gang of Stupid has done gone and dropped the hammer, or is about to drop the hammer on the Bureaucracy in the FedGov.  I got multiple sources who linked me some stuff and emailed me some MOR stuff, and it's apparent that "The Night of The Long Knives" is coming like a freight train.

Feds Could Be Fired, Imprisoned for Lying About Vaccination Status

Unions may have to bargain over vaccination policy implementation after the fact.

The article in question is HERE:  https://www.govexec.com/workforce/2021/08/feds-could-be-fired-imprisoned-lying-about-vaccination-status/184357/
Reading it over, its readily apparent that IF you lie, IF you don't take the NotVax, if you 'don't follow der orders mien Damen und Herren', then yer career dissipation light is going to go blinking into the "Red Zone"
And them Unions?
What Unions?
Looks like it's going to be "fire 'em all, let the Union sort it out after the fact"
Night of the Long Knives indeed
For those who aren't well versed in History,  that was when Hitler got rid of any potential competitors from June 30 to July 2, 1934.  Lots of 'extra-judicial' murders.  Apparently the German DotMil was worried about the Brownshirts, the SA, and their nutjob leader, as well as was Hitler.  So, he 'offed' the majority of them.  OK OK, bit simplistic, but yeah, now I don't see that happening per se (i.e. the bloodshed part) but they're definitely lining up to nuke a lot of careers in the pursuit of the 'Ultimate Vax' or something.
An unnamed source sent me the form that they're going to use... reads like a lot of standard boilerplate: 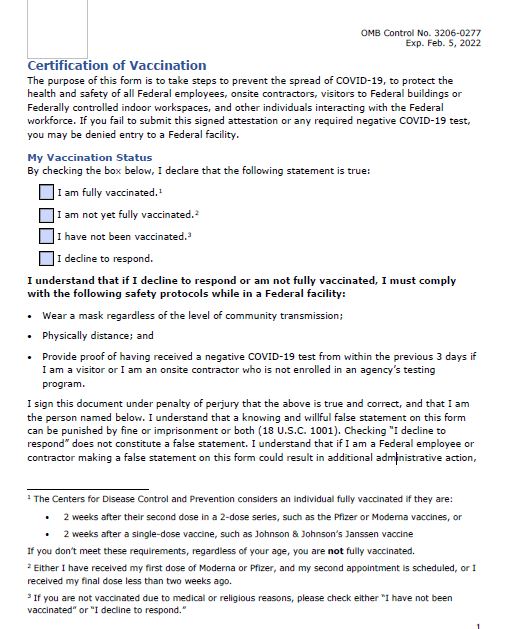 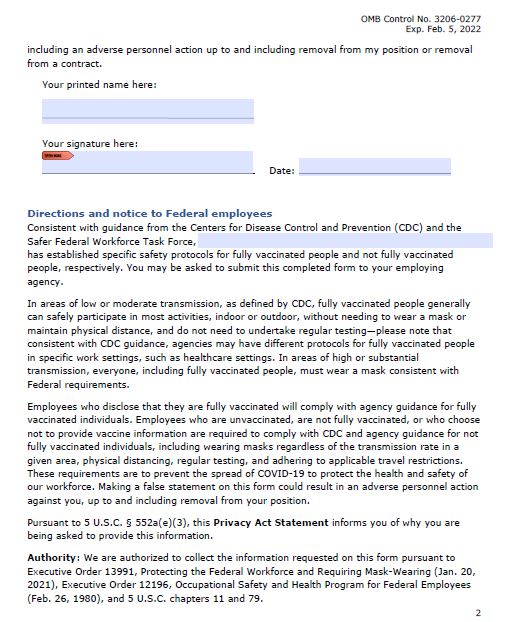 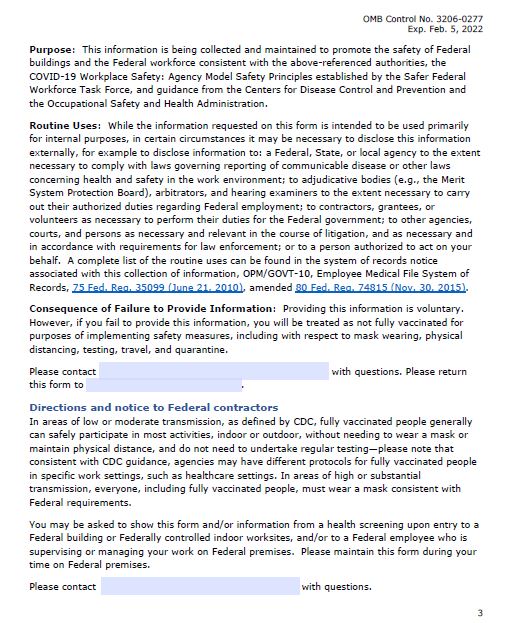 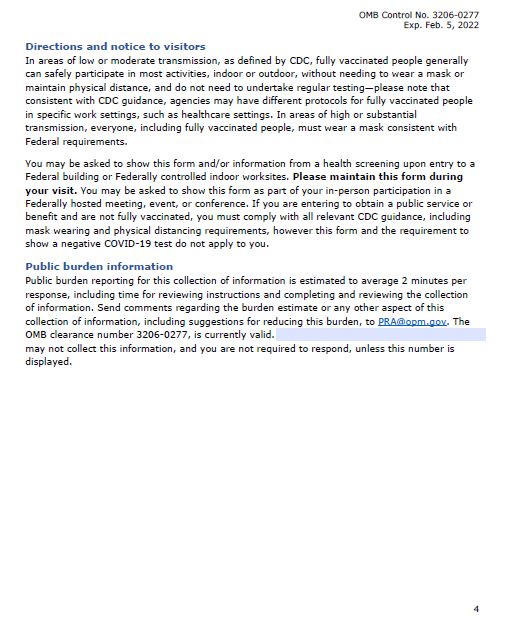 Couple of Admin Notes:
1)  If you are not hit with the NotVax, they're going to make your work-life absolutely miserable.
• Wear a mask regardless of the level of community transmission;
• Physically distance; and
• Provide proof of having received a negative COVID-19 test from within the previous 3 days if I am a visitor or I am an onsite contractor who is not enrolled in an agency’s testing program.
I.E. wear a mask, be shunned and have to provide every 3 days a negative test.  Dunno but if you are -not- in 'an agency's testing program' probably menaing a Contractor working FOR them, as opposed to a FedGovCiv who's probably in a test-regime, that means out of pocket test expenses.  Every 3 days.
2)  This attestation form was put together by the Office of Personnel Management under the direction of The Safer Federal Workforce Task Force.  And per the article, that is: "a group President Biden created by executive order that is led by the White House, General Services Administration and Office of Management and Budget—confirmed in new guidance agencies would not initially ask for proof of vaccination, but they could follow up for documentation if they receive “a good faith allegation that strongly suggests” an employee lied on their attestation form."  Which is worrisome.  Having been a FedGov Contractor for oh lo soooooo many years, and seeing the bullshit and internecine damned-near warfare that goes on, man, you ain't seen office poly-ticks til you have them FedGovCivvies going at it, jockeying to build their own power base...  The money shot: "...receive “a good faith allegation that strongly suggests” an employee lied on their attestation form." is corporate speak for ratting out whoever you fucking hate at the time in order to fuck them over.  Bowb-your-Buddy week... the purest Blue Falconry the FedGov can get...  They're going to be fucking over each other so hard, I think the accelerationists might be right, that shit like this is going to hasten the collapse.
3)  The "Routine Use" info also is very enlightening. (Boldface is mine)
"Routine Uses:
While the information requested on this form is intended to be used primarily for internal purposes, in certain circumstances it may be necessary to disclose this information externally, for example to disclose information to: a Federal, State, or local agency to the extent necessary to comply with laws governing reporting of communicable disease or other laws concerning health and safety in the work environment; to adjudicative bodies (e.g., the Merit System Protection Board), arbitrators, and hearing examiners to the extent necessary to carry out their authorized duties regarding Federal employment; to contractors, grantees, or volunteers as necessary to perform their duties for the Federal government; to other agencies, courts, and persons as necessary and relevant in the course of litigation, and as necessary and in accordance with requirements for law enforcement; or to a person authorized to act on your behalf."

Huh... now why the fuck would law enforcement have to know -anything- 'bout yer NotVax status?
Unless there's something that hasn't been brought to light yet.
THAT right there...
Not so good, not so much Aye?

And to the Merit System Protection Board, I wondered what the hell that was... well, according to the Wiki: The Merit Systems Protection Board is an independent quasi-judicial agency established in 1979 to protect federal merit systems against partisan political and other prohibited personnel practices and to ensure adequate protection for federal employees against abuses by agency management"  IOW, a board to keep the FedGov employees covered, and provide protection from 'partisan politics'... which means any questioning of this bullshit by anyone, can be ginned up to 'politics as usual.'
This, IMO is the thrust to get rid of the Not-NotVaxxers in the FedGov... only "Party Loyalists" i.e. the True Believers get to have a coveted normally-impossible-to-fire-FedGov job.  Those who question the validity and safety, or even the need for a jab need not work, nor apply.  Seeing that the majority of the Not-NotVax folks tend to be 'closeted' right wingers, or at least no longer have any trust in the FedGov, this's going to be the way to clear out any stragglers or folks who, when, NOT if, the shit does in fact hit the fan, they won't have to worry about internal moles.
Night of The Long Knives, without the bloodshed?  Your thoughts?
OK, so other other things:  LOTS of Glowies showing up here. 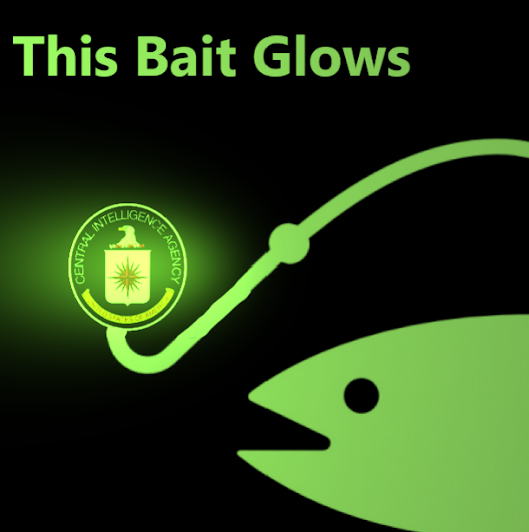 Too fucking many.  Really funny how many moderated comments I have to nuke, as well as block.  Also, lots of folks who want to bitch about my 'style'.. hey, don't like it, Go Away.  I'm here to vent my spleen, not cater to picky folks.  I do provide a lot of weirdness, and hopefully some humor, but if you don't like it, not my concern.  What does concern me is the amount of I.P. addys that are bouncing back...  or I should say not bouncing back.  I get hits from allll over the Middle East, lots of my friends I had from Kuwait/Iraq/Affy I'm still in contact with, but for ONE country noticeable in it's absence:
Israel.
Like blogger has a chart that shows you where ALLLLL your 'hits' are coming from...  Now, suffice to say, not too many in the Middle East, 'cept for U.A.E... The Emirates I've had a couple of thousand, although whether or not those are friends of mine still over there or redirects, I'm not sure.  Then there's a few here 'n there.  However, there's a big hole on that map. No Israel. At all. Z.E.R.O. hits. Hell, I got Sweden and Norway hitting as #5 and #6 on my list of 'players'...  My thoughts seeing's I'm BIG on the Badthink list, that the IDF Unit 8200 is using proxies to view this here rant.
Sorry guys... nothing here that's particularly interesting... why don't you go fight your own wars for once and leave us fucking goy alone?
The other piss-me-off is the spam from India about drugs... Listen, Dotheads, I have NO ISSUE if the drugs were worth it... I like me my pharmaceuticals but I don't give a shit about your 32 page ad for dick-pills and hydrocloraquinine mkay?  You want to link me some good shit like Soma and/or Percs and/or Vicoden with out a script, then we can talk, otherwise, quit spamming me all over the place.
Sheesh.
"It's not just a job, it's an adventure!"
"Join the Army They said"
"See the World They said"
"Bang Hot broads in Foreign and Exotic Locations They said"
"Learn a trade They said"
"They Lied"
"I no longer believe Them anymore"
And neither should you.
So More Later I Remain The Intrepid Reporter
Big Country 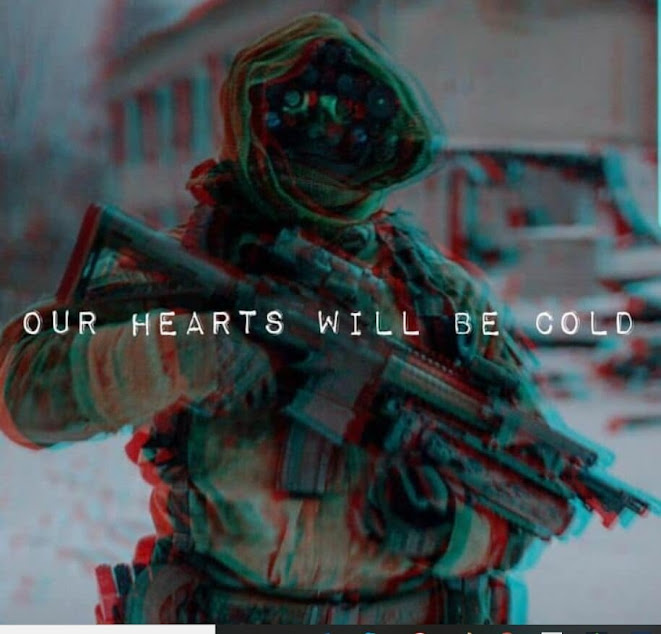 Posted by BigCountryExpat at 7:56 PM