Greetings Me Droogs N Droogettes!
Couple of comments thrown out there how therez ads on Ye Olde Bloggage.
Let me tell you, t'was a hard decision, but man, I need to monetize.
I purely hate asking for help, y'all have done enough.  Tis whut Tis Aye?
I've now been told that the unemployment isn't going to happen.  I'm appealing.  Seems -someone- a year ago did me dirty... I got a letter a year ago and never thought about it, because at the time it didn't make any sense.  So, there it is.  -someone- apparently had filed for unemployment with my info, and had successfully done it... the problem was they did it when I was between jobs... and that time I wasn't out of work long enough for me to file
So apparently someone else did, and now it's identity theft and fraud, none of which is me.  They got the mailing addy (that was changed by whomever took over the UI account without my knowing) so they'll get whoever it is.  Problem is, z.e.r.o. cash in-flow.
Ergo:
Evil ad revenue.  Ain't much, but when every. single. dollar. counts?
Oh yeah
Fuck you pay me.
So, sorry about that.  I'll turn 'em off IF this new job comes through.  It's not as much sketch any more but rank HR dumbassery methinks.  We'll see.  They got what they needed theoretically.  I'll give it til Friday late afternoon, email them, and THEN start hitting the panic button if I don't hear anything by say Tuesday.
So, other things

Wow
If she was human, that'd leave a mark.  But, as we've seen, proof of humanity was never hilleroid's strong points.  Still sick burn bro.  In the news, we got the possibility of a bomber sitting outside of the Library of Congress, which, to my thoughts is a really odd place to park a truck-bomb
Nevermind broadcasting all over Fecesbook...  Not sure... a real loon or false flag?  Can't say.
BUT 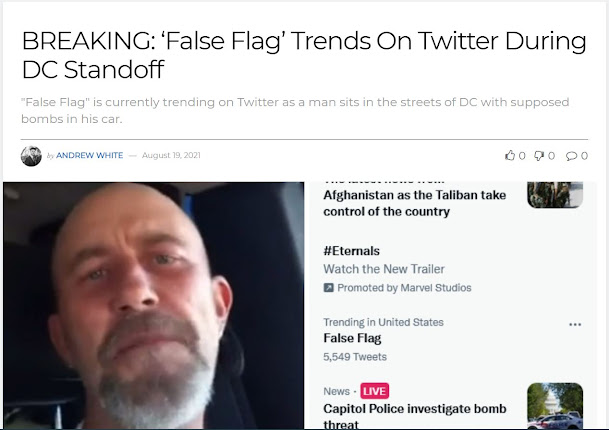 The blue checks are going nuts with #falseflag
Couple of Quotes:
“Pro tip: running false flag events when nobody trusts you and are wise to your previous hoaxes is not a good success strategy,” one joker put up out there...

“What is happening in DC today I am willing to bet is a false flag operation. Only thing now is how they swing it. Big Gov “saves the day” and distracts us from the international issue that plagues this Admin. Or they kill off the guy & continue to blame all conservatives are bad,”
“White guy terrorist threatening to blow up DC during the embarrassing Afghanistan mess………how convenient. False flag,”

Guess this's what happens when the trust in the DotGov bottoms out Aye?  When you've lost the twitterfags, it's all over but the crying.

However, I don't believe this is a false flag.  I think this's another case of a Redneck Spongebrain Squarehead going past "full retard" and straight to "Ludicrous Potato"
Jes' Sayin'
Because who the fuck does this?  This's retarded even for the FBI
So, Occams Razor... this's retarded because it's retarded.
Nuff Said about that.
Otherwise things are good here at the casa.  I might be doing a photoblegg about dyeing some of that awful gray ACU gear I have laying around... About a year and a half ago one of my neighbors did a yard sale before the lockdown and he'd retired from the DotMil.  He had (and sold me for $40 SCORE!!!!!) his full size ALICE 2 Ruck... the goonga-size el monstro ruck.  Problem is it's in shit-gray ACU.  So, researching the YouTube, there's this old scudder that someone linked off of Normal 'Murican's aggregator of a guy who buys and dyes all the ACU shytte with RIT dye.  I got a bottle a few back and meant to do it up, but blah blah time too may projects, I'm lazy and my pussy huts.  NOW I have too much time on my hands so I pulled it out and apart.
Let me tell y'all... this thing is a motherfucker pure-dee to take apart.  I had to shoot like 30 photos so's I can put it back together again.  Say what you want about the old LAICE system, but removing the frame? Total of six straps to undo... takes about 3 minutes....  this fucking thing??  Try almost an hour and like 10 straps, 20 lil tabby thingys and OMFG the buckles... I had to un-thread like ALL the bayonette snap buckles off the thing to get the frame off... many vile curses were made I assure you.
If it works and we'll see, this's a good thing as ACU tends to be available and waaaay cheaper to get.  I'm going to use the RIT apple green per this guy's thing... if I find the vidya again, I'll link it in the "when I do my shit" bleggpoast.
So, More Later I Remain The Intrepid Reporter
Big Country
Posted by BigCountryExpat at 2:56 PM