Greetings Me Droogs N Droogettes!
So, been a rough few.  Finally started doing a bit of an overlook on some of the things going on 'round here in the F.U.S.A. and the latest and greatest bullshit to ever be pulled on us, the great deplorable unwashed masses.  Seems old Xio Bi Den has started the process to insure that he's just a phone call away from his controllers in Peking. 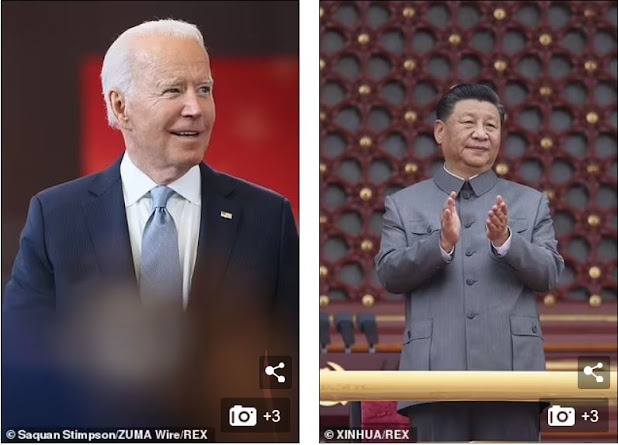 Haven't seen anything in our Ministry of Propaganda organs here stateside, but the Daily Mail has a pretty good writeup HERE: https://www.dailymail.co.uk/news/article-9787461/Biden-wants-set-emergency-hotline-China-similar-Cold-War-red-phone-Soviet-Union.html

Guess that Xi doesn't want Grampy Stinkfinger to go too 'off message' anymore.  The TL;DR of it is the offishul story that they're going with is that P-Resident Xiden is looking to set up an emergency direct hotline with the Chinese government to reduce conflict between Washington and Beijing.  To me?

They're tightening the leash.
Gotta keep the puppet dancing to the right (or in this case Commie Left) tune amiright?
Now, supposedly this shytte started a ways back.  However, methinks, and y'all probably agree that this's just -purely co-inky-dink- that the current resident now suddenly needs a direct line to Joe Chink and Xinnie the Pooh? 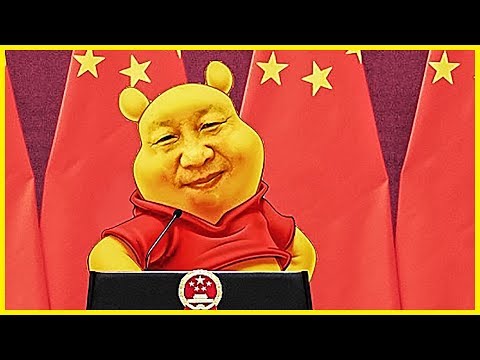 OK... so, now that there's a hotline being established, ok... whatever... I honestly do not care -who- is giving the orders... like I said Let. It. All. Burn.  As long as they leave -me- the fuck alone, we're good.  Stay outta mah rhubarb patch, and leave me my fun with guns in the Florida sun, and we'll git along jes' fine.
Jes' Sayin'
Now, OTOH:  I -think- I figured out a few things.  Haven't seen the threads put together yet, and this's pure conjecture on this.
Now, for everyone who's even remotely paying attention, the reporting on the Federal Bureau of Incompetents has been kind of going way overboard as of late.  Leastways the amount of stories, vis-a-vis their, shall we say, over-energetic entrapment schemes and lack of any and all common sense and/or decency.  I mean Lord knows... 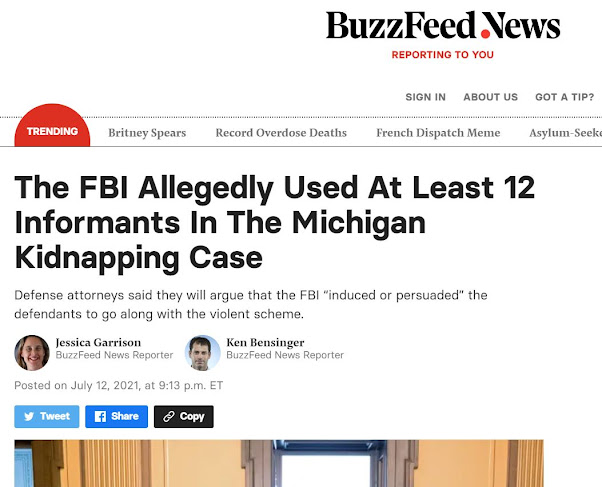 Buzzfeed... fucking Buzzfeed man.  Libtarded as all get the hell out, and the fact that what isn't mentioned is that the 12?

That's out of the 14 people that they hemmed up.

"Great job Lou."  I mean really?   Stonetoss did a cartoon on it today, which was pretty much on point, but the best was Z-Man over on Gab: 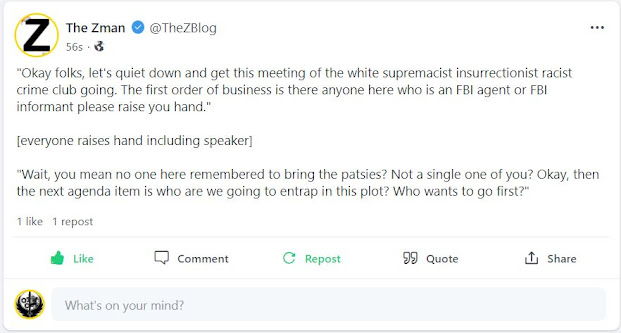 No shytte there Aye?
Add on the "Capitol Lego set" bullshit, annnnnnnnnnnnnd what do we get?
Well... from my perspective:
-nothing- is done by the State Sanctioned Ministry of Propaganda.

Not without orders
Not. One. Fucking. Thing.

Ergo:  The Fibbies are being lined up for a shutdown.  There's a mess of stories out there, and descriptive wording like "overreach" and "abusive", "totalitarian"... add on some of the supposed 'investigations' into the Bureau itself, and it's methods, I think it's part of a bureaucratic kill-shot.  My rationale for this is that it has been traditionally the FBIs job to do investigations within CONUS (CONtinental UNited States) and has all FedGov jurisdiction.
However:  It's limited.  And within the U.S. Department of Justice, the FBI is responsible to the attorney general, and it reports its findings to U.S. Attorneys across the country. The FBI's intelligence activities are overseen by the Director of National Intelligence.  These guys all answer directly to the President or CONgresscritters.  Although it is a federal agency, the FBI is not a national police force, and law enforcement in the United States remains principally the responsibility of state and local governments.
THIS is why the Capitol Police are being 'rolled out' to a National Level.
The Capitol Police?
The -most- corrupt PD in the entire Untied States?
Yeah...
And guess what?  They are not considered a "Law Enforcement Agency".  Nope.  They report to Congress and are part and parcel of the Legislative Branch.  When asked by certain media outlets for Freedom of Information Acts regarding Capitol Police corruption back in 2020 (before they came to the forefront of the January 6 Buffalo Jump that is) that they replied: “Please be advised that the United States Capitol Police, as a legislative branch entity, is not an ‘agency’ as defined by 5 U.S.C. §§ 551 et seq., under the Freedom of Information Act. Therefore, the USCP is not subject to the requirements of the Freedom of Information Act.”

Howzaboot them apples?
Currently, they're expanding too.  San Francisco . and Tampa specifically.  NORMALLY the  USCP's primary jurisdiction is within buildings and grounds of the United States Capitol Complex, they are also charged with protecting members of Congress throughout the entire United States and territories, and they have that authority to protect “in any area” of the country, according to 2 U.S. Code § 1966.

Hmmn...
Where have I heard of -another- Capitol Police that went 'National' and given extraordinary police powers with little or no oversight at all? 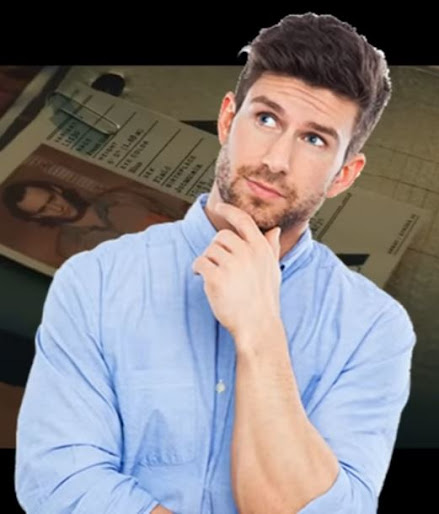 (Stolen from the Critical Drinker on YouTube.  He's great.  Check him if you can.)

Sooo... what was the name of that overarching super-fuzz police force?

As I keep saying, History keeps repeating and God has, if not a sense of humor, he has a really deep deep sense of irony.  The Gestapo was the final iteration of the Secret Prussian Police.  They ended up being, well... the very definition of an evil secret police.  And don't think for one minute that that's not what the current Regime has in mind.

Theoretically it -could- happen.
Kind of frightening.  It's why we haven't had -any- significant release of Info aboot January 6th, nor the name of Ashli Babbit's murderer.  They report only to the Congresscritters.  Tell me that they wouldn't use these assholes to go after us 'badthinkers?'
Yah... sure, and monkeys'll prolly fly oot of me butt.
So, thoughts and additions in the comments are ALWAYS welcome.  It makes sense though.  Declare the FBI to be 'abusive' and then, while making great hay of the news "See, we are doing something about abusive law enforcement!!!" close 'em down really publicly...

...and then -quietly- fold them into the Capitol Police, which'll get a makeover and new cooler name.  Something like "The American State Police" with the acronym 'ASP' and then, they can try to make it a full on occupational FedFuzz.
Any bets?
So, More Later I Remain The Intrepid Reporter
Big Country 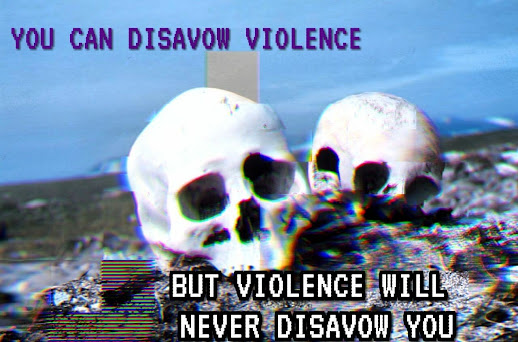 Posted by BigCountryExpat at 4:20 PM