Greetings Me Droogs N Droogettes!
OK
My sourcing is... shall we say... unwilling to say anything that could be 'identifiable'... The how, where, when, who... all of it is out the window.  Can't say which country I worked with them in.  They (and yeah, I'ma use the They/Them/Theirs pronouns in hopes to keep things on the down-low.)  They however have already heard rumblings about the 'vaxport.'  That's what it's going to be called theoretically.  They have an upcoming vaykay from Ye Olde Jobbage, and were told to make sure the papers were in order before doing any travel.  Reason is, the 'vaxport' is going to be needed for any travel in, around and through the majority of the Western World.  Papers for the fam needed to be gotten and maintained as well.  As in "get them (das Papiere) now, as we cannot help you later."
Essentially, we're going to see a quick move to "Full Soviet Control" vis-a-vis borders, movement and the ability to travel.  The current rumblings of the Delta Bullshit variant?  They said this ain't shit as to what's coming.  According to them, (They's bosses) there's a massive spike coming, just in time for the horror-days, and yeah... that's the term they used "Horror-days" instead of 'holidays' when they were supposed to be travelling around and oot and aboot.  They (my peep) think it's because the 'nominal-normal spike of pneumonia and cold related flus' are ALL going to be tagged onto the COVID Hump.
Just like they did last year.
'Cept this time, they're (not my folk) but "they" for the powers-that-be ain't gonna play.
They like the power they were granted
They love the control factor
They intend on keeping that control no matter the cost
We, on the other hand?
We Be Fucked

They (my peep) say that the current situation?  Going to have the DotMil called out despite posse commitatus to round up 'anti-vaxxers' and whatnot.  Now, They (my peep)... shit, without going into any detail I can't say shytte.  Trust me.  To give you an idea, I'm unemployed, broke as fuck, and I had Sapper pick up some MOR paper towels, toilet paper and MOR rubbing alcohol on receipt of this news.  Everything else I already got in spades but THAT stuff was impossible to find during the last dumbass 'flatten the curve' bullshit... not that we -normally- go through a lot of it.  It was -very telling- when I had to send a 'care package' of 8 rolls of toilet paper and 4 rolls of Bounty to the in-laws in the Villages.  Even when I was in Iraq I never wanted nor had a dying need for Charmin.  I mean try it from my perspective:  I'm packing up and mailing butt-wipe, paper towels and sanitizer to my in-laws because there ain't none to be found for love nor money in one of the wealthiest enclaves in the Untied States.  Talk about dystopian weirdness Aye?
Now, for me?  Afghanistan was a different story however... no joke, the majority of 'public toilets' meaning the serviced by KBR or whoever, the shitpaper there was John Wayne Brand from of all places Kyrgyzstan.  Labeled on the outside wrapper "Is Proud Product of Republic of Kyrgyzstan" it proudly proclaimed. and maaaan... 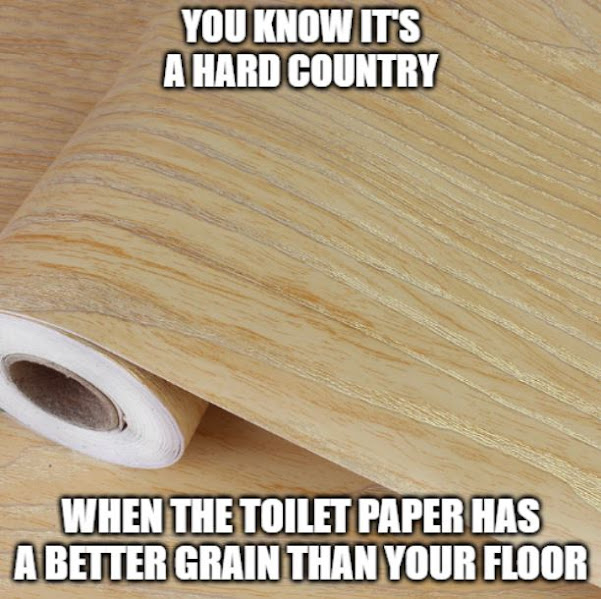 Wish I was kidding
You could literally see the chips of fine-cut wood processed into the shitpaper.  Gotta say though, one you get stuck using hardcore buttwipe like that for a few weeks, lets just say you prolly don't worry about being anally raped in prison so much, as your nether regions already done gone and got beat on by the wipes.
"John Wayne Toilet Paper
It's rough, it's tough and it don't take no shit offa no one, no how."
Email to Xwife: "Send. Good. Buttwipe. Now"
(She didn't of course)
So, They and thinking on it, that might be something I'm on to.
IF you have to correspond to anyone vis-a-vis anything in regards to anti-regime intel, hell, in general.

Might even be completely innocuous... USE THEIR TERMS.  Not 'he/his' or 'she/hers' but 'they' and 'them'... might help obfuscate the sourcing and even the personnel involved.  Xi/Xer is even better... word salad so to speak.  Make it so in a court of law IF you get hemmed up, that you use this exact tactic against them (xem).  Make them work for it.  Especially if you use the 'gender/identity fluid' defense...  "Prove that I'm a man".. or Waman, or a pink unicorn... whatever floats ye olde boat.  Make it Harder... harder the better.  Because if they can't prove within a reasonable doubt (this based on that there is any fairness or legality left in a court of law) that you can muddle the fuck out of xhey case against you. Or xou as the case may be.
Food for MOR thought.
So yeah, word is from on high to a middle level they, that things are -just starting-
This's a source I literally would bet my life on
Ain't many of they/them out there.
So yeah.  September October is the gambit
By December, Katie Bar the Door.  Got more, but can not go into specifics
BUT
Watch the news... if they (the bad guys) start talking about a 'vaxport' in conjunction with air travel or international travel?  I consider that particular Rubicon as crossed
Ain't no going back, 'cept through out and out war.
So, More Later I Remain The Intrepid Reporter
Big Country 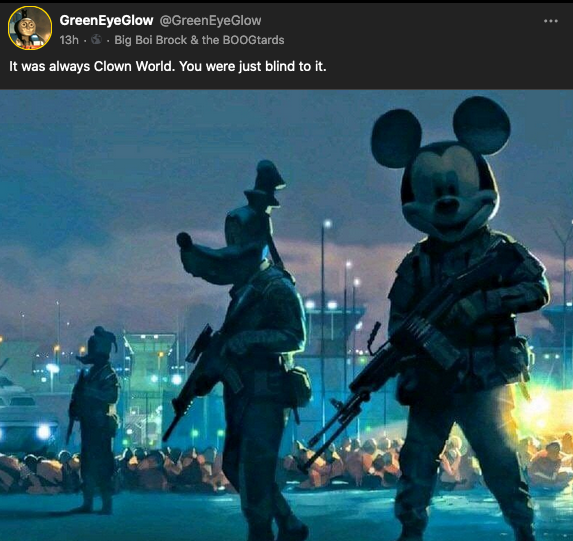