Greetings Me Droogs N Droogettes!
Back in the groove apparently.  A bit o'80 proof skull lubrication always assists, as well do you kind readers.  One of the emails I got sent me a link to the "The Seventy Maxims of Maximally Effective Mercenaries" which is pretty funny stuff.  Link here: https://schlockmercenary.fandom.com/wiki/The_Seventy_Maxims_of_Maximally_Effective_Mercenaries
Yeah... think I may have been the originator of a few of those...
Lots of pithy sayings back in the "Run n'Gun" days of 'wine and roses' in Baghdadland, formerly known as the "Club Saddam A-Go-Go"...
The name of the club BTW?  Got it from this:
Used to ride around an blast that shit through my speakers on base and off base... GREAT tune for the concept of rolling through Baghdad.  Wish I'd recorded it and sent it... I'd like to think that the lead singer David Brockie (RIP) would've gotten a kick out of that tune being blasted at the Haj in Baghdad.
But yeah, in fact, #13. "Do unto others." is missing the follow up of "BEFORE they do unto you."
As well as the other classic: "Close only counts in Horseshoes, Hand Grenades, and Nuclear Weapons"
I meselves kept the Ferengi Laws of Acquisition in a frame on the wall during my Loggie time.  Link to that gem is here: https://memory-beta.fandom.com/wiki/Ferengi_Rules_of_Acquisition  My personal favorite was #34 "War is good for business"
Amen to that brother.
Yeah, it got me to remembering some of the better times we had over there.  In early 2004 we constantly came up with shit to do... prank-wise that is.  I mean back then?  -barely- comms back home... mostly AT and fucking T with their bullshit $2 a minute payfon bullshit... bunchabullshit now that I look back at it... goddamned pieces of shit motherfuckers making us buy their prepay cards, and then charging the ever living fuckballs out of us to use, what we found out later, was FedGov DotMil based VSAT Comlinks...  in other words, they were using the DotMil satellites to send their com/phone signal back to the states in a sweetheart deal that prolly got Pelosi or whoever a really sweet kickback for the FedGov contract, while bending the troops over who wanted/needed comms with home.
Man, after the Iraqna Cell phones came out?  So much for alpha tango tango... those phone booth trailers became objects of vandalism and impromptu latrines.  I know I ripped the occasional phone up out of boredom more than once.  Fuck them motherfuckers.
But, back tot he pointage.
Pranks.  We had a bunch.  One particular day we decided to drive the truck in reverse.
All. Day. Long.
When questioned about this particular unorthodox approach, I told 'em the transmission on the 'leased Haj owned piece of shytte' was fucked, and wouldn't go in any other gear except 'stop' and we hadda be full mission capable to do our jobs... hence reverse all. day. long.
Imagine that shit... that it worked.  Talk about gullible.
Then, another one was there was a checkpoint between our hootches in CACIVille on the faaar side of the base.  In 2003/early 04, think "Bright Yellow" on the green-to-red threat index.  Right on the wall to the great big eeee-vil outside.  Big assed hole and gate, blown the fuck out courtesy of 3rd ID when they took the base... lots of attempts to breech.  MANY sleepless nights on the roof, with my Dragunov in overwatch of said-aforementioned blown out gate.
Because we were in a 'bright yellow'/'almost orangish' A.O., they had a sizable MP contingent stationed there from the Oregon/Washington National Guard.  That's where I met Zion back in the day.  81st Stryker Brigade. 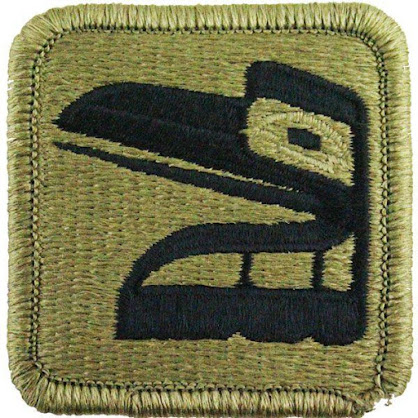 The patch is for Washington, but the unit of MPs in question was from the borderlands between the states.  As far as I know, the only unit who had someone busted for outright treason during the war, some moron who tried to sell 'classified intel' on how to defeat the M1 tanks to the Haj or some such shit... google it... I won't link total retardation here...
Anywho, these guys were there, to include "Spec-4 Grandpa"...
Seriously... this fucker was so old, he farted dust.
Guy had to be a crossing guard at the parting of the Red Sea.
So old, he remembered the fielding of the Mark One Spear from the Mod One Rock.
Old-Old
As in "What in the ever living fuck are you doing here Pops?" old.
His reply: "It's mah duty."
Jeez... hard to shit on or argue that.
However, we -did- fuck with him.  Unmercifully.
Had at-th-time wife send me Geritol... Depends... all sorts of shit for old folks.  Gave it to him as a care package.  Gotta say, he had a great sense of humor.  Ballsy old fucker too.  Had -no- issue in taking on bad guys... got a bronze star... a real bronze for being the gunner in a toe-to-toe engagement.  Balls as big as churchbells.
But the other guys?  Oh my god.
We fucked with them with various days of the week.
"Nearly Naked Wednesday" was one of my favorites.
"MOPP-4 Friday" was even better.
The others?  Don't remember those so well... we took our clues from an episode or two of 'M.A.S.H.'... good mash.. as in the Henry Blake years... when Hawkeye and Trapper spent half the episode fucking with Ferret Face Frank Burns...  we didn't and couldn't do anything that could actually affect situational awareness or their jobs, but where we could fuck with them just enough to make it fun.
"Nearly Naked Wednesday" was easy.  We simply stripped down to the tighty-whiteys, and only wore them, our boots (of course) and our body armor and helmets.  Really put the weird on them to pull up to the checkpoint, flash ID, and have them realize we're almost bare assed in a war zone. "Nearly Naked Wednesday" indeed.
Then, the next one?  Well, unintentionally, it happened -right after- EOD accidentally blew off two nerve gas binary 155mm shells and caught a case of the 'kickin' chikins'  Lil knownfactoid: Saddam did have chemwar shells.  VX and or Blister/Other.  And a lot of them.  Old soviet stock.  And when it went to "Wild Wild West" mode, a couple of them got scarfed up by 'bad guy Haj', who, due to ignorance and no training, didn't know what the colored marking rings on the shells were, or that the rounds, being like 20+ years old, the paint had worn off.  Either way?  Live Chemical Warfare Weapons of Mass Destruction in play, and no one the wiser.
Until E.O.D. blew a random 155mm shell on Route Irish outside of BIAP.
According to what I heard, it was a normal run-of-the-mill 'blow it in place' IED.  Rusty old piece of shit leftover from God-knows-when 155mm Russian round.  Packed it with C-4, blew it in place, then, back to the chow hall for lunch.
Got to the chow hall most ricky-tick.  Then one of them asked to have the salt passed to them.  Dude went for the salt, and realized his hand was out of control shake DTs level shakes...  Give 'em credit.  Not a "Huh, maybe I have the shakes worse now" thing... Nope... They immediately went into "Exposure to ChemWar Rule One" (atropine injection), called for decon and medics and all was well.  Took them a day to decon the chow hall where they'd been sitting, and then they did the AAR (after action review) and found on a close forensic check that the shell they blew?  Binary VX nerve agent round.  Seems the marking paint had either rusted/rotted off from the time in storage.  See, lots of Haj hid the ordinance in the drinking water wells... if anyone tried to look too closely, they'd yell how the Infidels were trying to poison the well, knowing full well that the well itself was filled with bad boom-boom.
Fucking Haj.
So in this case, they figured out the outer casing had lost all markers, and when E.O.D. did the big bad on the gear, it mixed the agent just enough to hit them with a minor case of VX Shakes The Clown.
Last I heard? 100% perm and total disability.  The whole team.
Bad stuff there Aye?
So, with this knowledge, and being the dicks we are, we rolled up to the checkpoint.  In full-on fully-geared MOPP-4.  For the FNGs here, MOPP stands for Mission Oriented Protective Posture... meaning "how much shit you gotta wear to stay alive in Chem-Bio-War." 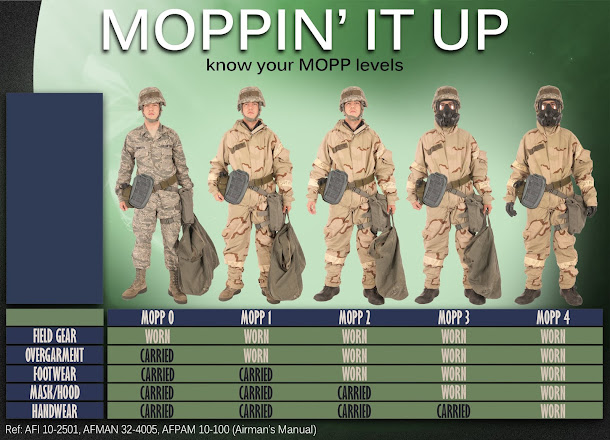 We went in at MOPP 4
Yeah, we're dicks.
Point is, when we rolled up?  The first guy to meet us, well, he was nonplussed... a clueless deer-in-the-headlights look.  Spec-4 Grandpa?  Hadn't a clue...  The other guy?  Closest to the trucks?  OMFG... he started screaming at the top of his lungs: "GASGASGASGASGASGASGAS!!!" As he frantically ran to the long-parked and truthfully starting to sink-into-the-mud HMMVW and start insanely digging in for his long-stored Gas Mask/Promask and chem gear.
Zion showed up a second later asking "What the fuck was up, and what the fuck are you assholes doing?" to us, as the now-frantic MP was acting like a mad gopher, digging through a MOUND of stored gear in the ass-end of the truck...

Visualize shit flying out, at a high rate of speed, littering the ground behind said-aforementioned long-term parked gun jeep... skin mags, MREs, ass and trash.. all the shit that accumulates, 'growing wings' and flying out the back, all-the-while a frantic/panicked dude rooting to find the shit he needs, freaking the fuck out.
We both took our promasks off at the same time, and yelled "Happy MOPP-4 Friday Fuckers!!!" and gunned it the fuck out of there... leaving a befuddled Spec-4 Grandpa, and a pissed off E-6 and a bunch of frantic/confused privates in our rear view...
Good Times...
Best to focus on them Aye.
More Later, I Remain The Intrepid Reporter
Big Country 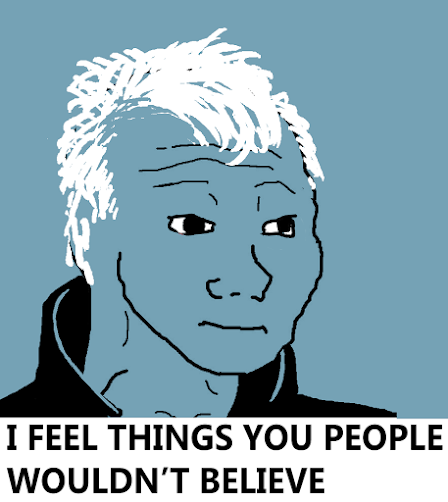 Posted by BigCountryExpat at 8:45 PM