Greetings Me Droogs N Droogettes!
Lifes lessons:  Be thankful and prayerful for what you have.
You never know when your going to lose everything.
To my readership, I can't thank you enough for all the unexpected donations, mostly all, from the notes, meant to assist in my never-ending Ongoing War Against My Liver.  So many Finlandia references I lost track.  But seriously... I can't thank you all enough.  Each and every last one of you droogish and thuggish lot, me most 'umble thanks. 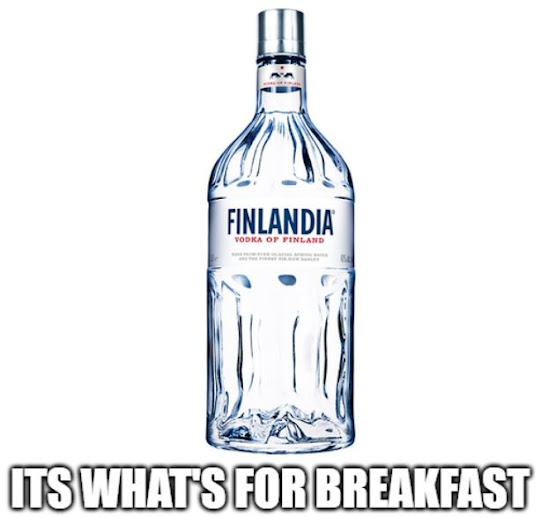 No shytte there.
Other bit n pieces.
I mentioned something over on Gab.  Not really wanting to go into it here per se, but needless to say, The only thing I haven't lost now, per the country song, is the dog. 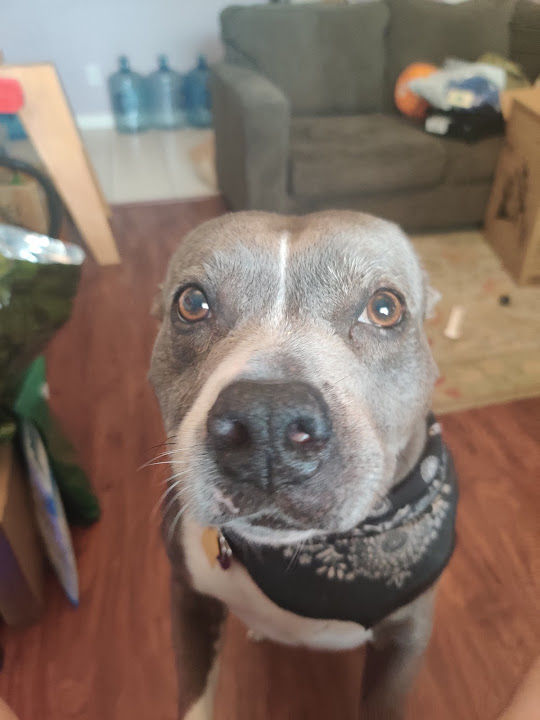 My only brown eyed girl now apparently.  She's telling me it's gonna be ok.
<le sigh>
Yannow, I had a commenter on here a waaaays back who was talking some serious foil.  Like cray-cray IMO tinfoil stuff... that I was potentially a target for people with bad intentions.  I figured it was a case of the abyss with this guy.  I went to the websites that he linked to me, and read the emails he sent me, and man, how far down the rabbit hole do you want to go?
Seems that fucker is bottomless
The basic idea was BECAUSE I refused to go to work for a certain three letter agency back in 06, that I've been on a "harass and fuck with list" and that ALL my issues are because 'someone's watching me' and that I'm not paranoid, that someone is out to get me.  According to him:  That new neighbor?  Watching me.  That guy from work?  Reporting on me.  We're talking crazy shit here.
Times like this make it really hard to brush off weird assed rabbit hole bullshit like that Aye?
No worries tho gang.  I'm still present and accounted for.
Damaged goods but who isn't these days?
I'm made of sterner stuff.  Water = Duck's Back, wash, rinse, repeat.
No worries that I'm seeing shit or people, however, when the universe decides to fuck with me, it really decides to fuck with me.  And it's almost chartable.  Certain times of the year I can almost guarantee certain times will be exceptionally good and other times of the year will be exceptionally bad.
Good times, bad times, it's important to have GRATITUDE.  To be grateful for the small things.  That GranBebe is healthy and growing up well.  That my doggo is healthy, and that Sapper may actually have a real job here shortly.  That I still, despite the slings and arrows of outrageous fortune have a sense of humor about all the bullshit I'm currently enduring.
That I didn't go to the January 6th Buffalo Jump... Holy shit am I thankful for that.  I had someone... can't remember who who wanted me to go, and man, s'hyeah...  I do not look good in Jail Orange.  Ask me of how I know this.  Grateful that I'm still in relatively good health despite all the other times that the Universe has taken a shot at me with bugs and bullshit.  THAT in itself is a minor miracle.  Still cancer free now 10 years?  Maybe more, maybe less.
That my son and I have a solid friendship AND relationship as a parent.  He seems to genuinely like me and enjoys hanging out with me, as I do with him.  That he's got a great woman who loves him and me (as a surrogate father figure) and that they're good to go.  In fact this weekend, I'm doin him a solid.  His kitty Nook needs to be re-homed.  Don't really have the room per se, but hell, if the bugger gets along with Bob-The-Cat and The Sausage Princess, it means Spawn won't have to totally give up his kitty.  A quick aside:  reason he has to get rid of the cat is he and his woman do the Exotic Bird thing... they have a dozen rare and expensive birds... the cat was good with the birds for about 2 years, but now?  They came home and found one of the birds completely chowed on... broke their heart and cats are gonna cat.  They tried to make adjustments, but the cat needs more room to run around, and even being an 'inside cat' keeping the booger locked up in the back room ain't fair, and I guess the birds are now all weirded by the cat whereas before it'd been cool.  Guess realizing that yer buddy is actually a serial killer even affects the birds Aye?
So I told him to bring Nook over here for a trial run.  Either way, he doesn't know it, but I'm going to keep her.  Figure it's the least I can do, and the expenditure is minimal to increase the chow and litter.  Not that I'm that good about doing the box that often anyways.  In fact I need to go change that nasty sucker right after this, note to self.
The INGRATITUDE out there... Hoo Boy.  Where to begin.  NOT going to touch on the personal life side.  I'm sorry and sore enough.  The societal aspects though?  Man.. talk about ingratitude. Every generation always talks about the generation that followed them as 'spoiled' or ungrateful.'  It's by the very nature of society for you people to have had it "so much harder"... the whole "Walking to school uphill, both ways in a snowstorm, Barefoot!" stuff that we all grew up with.  Every. Single. Generation. had a hyperbolic view of just 'how bad' it was growing up.

I personally remember being all butthurt about not getting a particular toy one year... Christmas?  Birthday?  The day was inconsequential in the larger scheme, but what stuck me was how my Grandmother then relayed to me a story about the depression... and it wasn't about her, but someone she knew.  That she knew of a little girl who lived up the street who was luck enough to have a roof over her head, when so many others didn't.  Grandma told me how people barely afforded food... never mind luxuries like toys.  I remember because I felt shitty for being a little greedhead.  Probably the first time I ever felt that way, and why 40 odd years later I -still- remember that.
The people today, for a cross generational perspective are the most. ungrateful. humans. to. have. ever. lived.  They carry on their person the information and knowledge that the greats like Einstein, Edison, Hegel... all the greats would probably sold their children to have THAT MUCH information at their beck and call.  Instantaneous transmission over VAST distances for NO COST... communication to MILLIONS at the drop of a few letters on a little box you carry in your pocket.
And what do all these people do?
Spend their time trying to tear everyone and anyone down.
ESPECIALLY if you fail to obey them
You never hear of a Tweetstorm to build someone up do you?
Nope.  Purely a destructive force.  In fact, I personally think it's the most corrosive thing to hit society in a century.  Fucking honest-to-Christ National Socialism with an Armband isn't as nasty and divisive.  Full on "Exterminate the Jooos" via Arab Supremacy got -nuthin- on Twitter Awakened.  Critical Whypeepo Trashing?  That's cool.  "Kill all da whypeepo" and smash "whypeepo superpreemacy" and hey, we good. 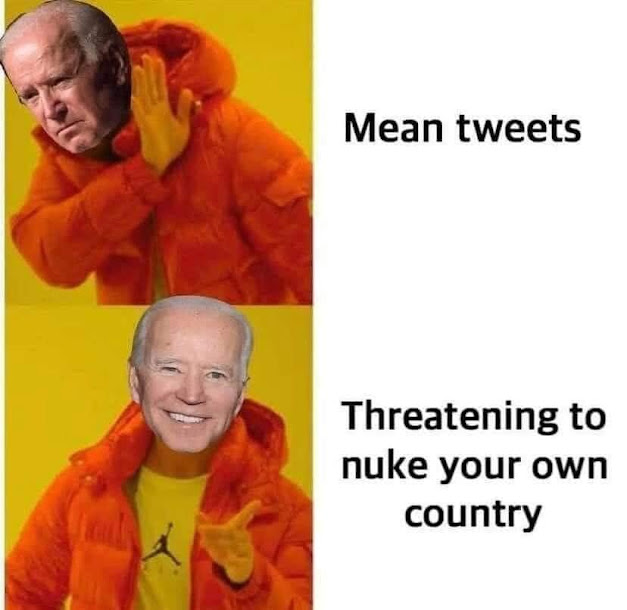 The lack of awareness
The lack of Gratitude.
Lets face it... the primary motivator isn't justice.  It's revenge
Getting even for being 'lesser'
A lesser people
A lesser race
A lesser will
Hatred and Disgust, self-loathing turned outward, rather than in.
"You didn't built that."
You're ab-so-lutely Goddamned right.  I didn't, and neither did you.
Better men then we did
And, unlike you, I'm grateful they did, 'cos I'm benefiting quite nicely because of it.
The Obamamessiah, for all his 'oppressions', him, the Oprahsauraus and Meghan "I'm an Oppressed Quadroon Princess" Markle-Windsor seem to be doing just fine in all that oppression they got going on 'round here.
It's almost like they can't acknowledge their own achievement, because without whypeepo, they would never have gotten to where they are. Last time I looked, under the very definition in Webster's "Failed State: See; any and all African-Run Countries in the World, sic Liberia, Zimbabwe etc.
Need I go on?
And it's not just racial.  It's everyone with an ax to grind.  Tribalism at it's best.  The Jews play the long game... they, by dint of their beliefs, and despite any and all deflection ARE tribal like a motherfucker, to the detriment to anyone who crosses them.  The Spanish?  Still pissed at the English for the whole 'loss of the new World' thing, and the Iranians?  ne Persians?  HIGHLY bent about that whole Babylonian thing from waaaaay back.
'Murica, for all it's warts, we're hated by -everyone- because we weren't supposed to do so well.
We were the junkyard dog-rejects of the rest of the world.
The scummy refuse
The religious nutbars
The guy who shouldn't have done well.
Think "Bill Gates"
That fuckin' geek no one liked, that everyone picked on?  He's damned near the embodiment of the United States, to include the megalomania.
Until shit gets right, and people start remembering what and whom did what for whom, (if that makes any sense that is) then we're doomed as a people.  Relationshits can't last if one party uses and abuses the other perpetually.  Nonstop lying and betrayal?  Eventually, the relationshit fractures, and depending on how bad that fracture is, it can end very very poorly for the abusive party.
Jes' Sayin'
More Later I Remain The Intrepid Reporter
Big Country 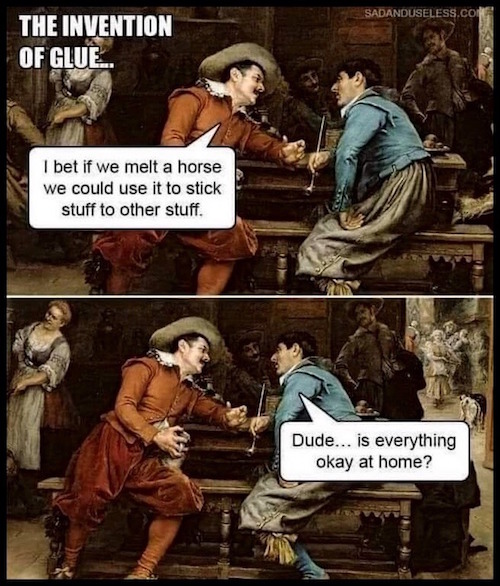