Greetings Me Droogs N Droogettes!
Whelp.  Day Two of unemployment and no word from anyone nor anything.  Leastways from prior experience this's a good thing.  That and my timesheet accounts and other accounts, while access is limited, they're still there.  Meaning that normally, and I speak as a former manager/supervisor, the first thing you do when the Termination is done, hell BEFORE it's done, is the Person In Question has all the network accessibility and accounts either completely blocked and/or deleted.  This's so a 'vengeful IT savvy type' of person can't sabotage or fuck with stuff.
But in my case, so far?  Not so much.  Methinks it's because now that the dust is settling, Legal is involved and are going "You fucking did what!?!"  Yeah.  Last job they did the same. exact. thing. and ended up coming back and offering apologies, my job back, and a raise.  I got fired for referring to the bosses as "fucktards" and "assholes" in a group chat, momentarily forgetting that all chats are monitored.  Same circumstances.  One minute working, next minute told to call someone, get on the phone and get the "You're fired!" message and bam!  That was it.
Turns out (and I knew) that you cannot go straight to termination.  Not here in Florida.  Methinks the HR Karenchick up in Virginia may have forgotten that, and since I'm work-from-home, that adds even MOR of a wrinkle into it, as I also have been paying the business line Internet for this gig as well. 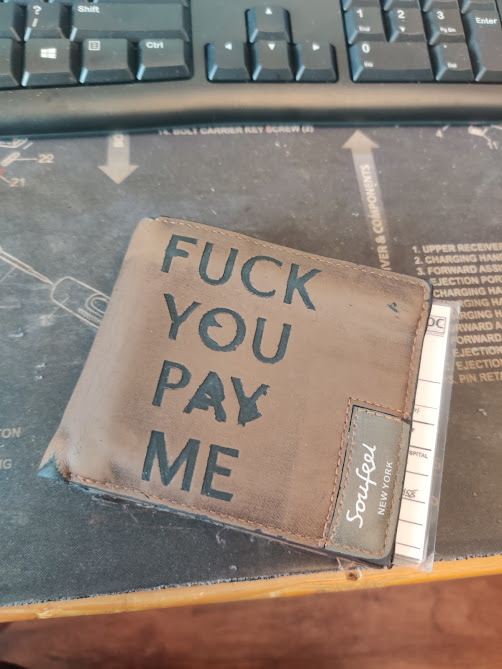 As the wallet sez...
Wifey got that for me a few b-days ago.  Rather apropo ain't it?  Checkout clerks love it when they see it.  Wifey n Me also, She and I are fine BTW... rumors of weirdness turns out to be premature, and I'm an overly-suspicious dick.
What can you expect though with the week I've had?
The dog and cat are cool though: 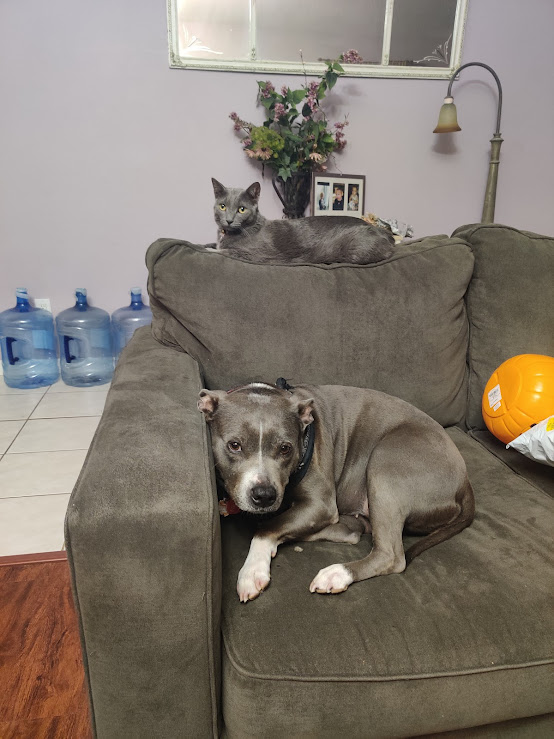 They get along for the most part.  Going to be interesting to see the second cat/third wheel show up.  She's a spayed female (Bob-The-Cat is neutered) and Stella is a female.  So, female dog/cat versus male cat, or is it going to be cage match cat versus dog?  Going to be fun as Bob is in his teen years, and a bundle of energy around 18:30 nightly.  That's when he starts what I call his "fuck-fuck" time... running around, doing laps, literally bouncing off the walls, the chairs, the tabletops, the dog, me, occasionally Wifey and Sapper... ball o'fuzzy energy, like he was amped on Meth.
Add in another young cat and it'll get entertaining quickly.
Also, new cat is the same color as the other two, and the couch as you can see.  Got this whole 'grey' theme going on.

So, probably more tonight on the Poly-Ticks side of things.  I'm still analyzing some data points I've been getting.  But today we're taking a ride over to have lunch with Other Gran and GranBebe.  She can't come here because Wally Gator is -still- in the A.O. and it's getting aggressive(r).  Might have to do something about that on my own if the HOAs guy doesn't do it...

That'd do it Aye.
So as I said
More Later I Remain The Intrepid Reporter
Big Country 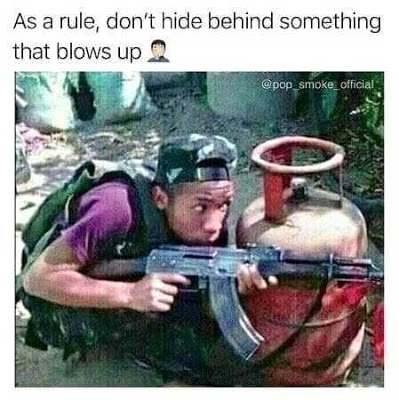 Posted by BigCountryExpat at 11:32 AM