An Omen, Weirdness (what else is new?) and the Vax Passport

Greetings Me Droogs N Droogettes!
So, last night I get up to take Stella-the-Sausage-Princess out for her last download.  Open the front door and there was a -flash- of a shadow or something... no idea what it was, and it was momentary.  After a couple beers late at night, one tends to dismiss 'optical weirdness'.  Leastways whatever this was didn't trip any alarm bells.
Until I get back in, post-download.
Both cats are circling the light fixture in the middle of the room, via the floor.  The cats are sort-of-kind-of in a cold war/peace thing now... the dog doesn't care as long as she gets fed. 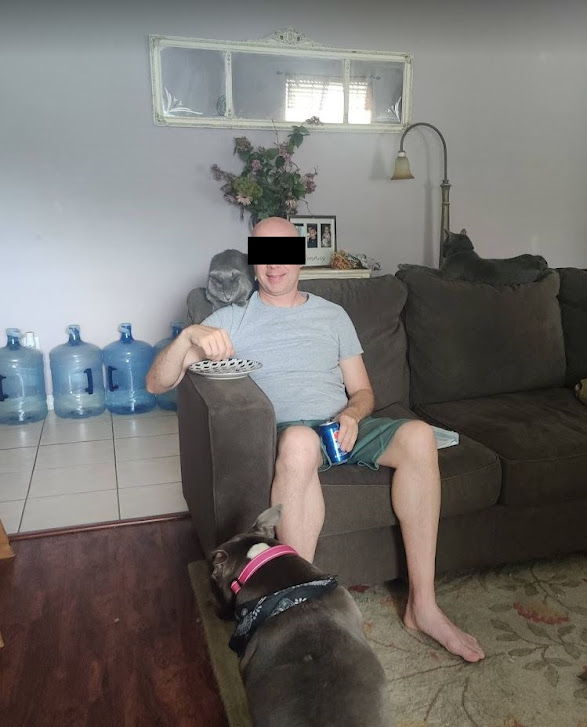 New cat Nook, on the left, Bob-the-Cat on the right, and Sausage Princess looking for scraps that Sapper just threw down.  And yeah, NOT intentional, but all three animals match the couch, and each other.  New Cat Nook?  Three differences:  Female, Fuzzier, and has a Tail.  Bob?  Extreme short haired male, no tail.  Which in itself leads to some interesting interactions 'cos Nook can't read Bob's body language what with no tail to use.  So, Anywhoo...
The dog's hackles go right up when she gets in, and what do I see?  A itty-bitty bird of all things in the chandelier/fixture.  It's not really a chandelier... more one of them decorative jobbies.  Seems the lil booger must have swooped -right in- when I opened the door.
Not. Cool.
I'm Irish.  Even more not cool?  T'was a Robin.
Now, Irish Superstition:  From the blog "Caught in Southie"  I give you dis;

Remember learning that robins have red breasts because when Christ was crucified, a little robin tried to pry the thorns from his head and a drop of Christ’s blood got him?  Oh, you didn’t learn that?  Well, that’s why God loves working with robins and he uses them so often.  If a robin flies into your house, someone will die (don’t get mad at me, I don’t make the rules).  If you put a robin in a cage, all of heaven will be in a rage.  Last but not least, if you kill a robin you will lead of life of misery.  Be nice to, and also afraid of, robins."

Yeah, normal and sane folks would be like "Meh."  Problem is, I was raised by an extraordinarily superstitious Dr DeadDad.  AND, not for nothing, the first time we had a robin get in our house?  Back when I was a kid?  MomUnit's Da cashed in like two days after.  I know, I know.  But still.  I'm on tenterhooks here... waiting for ye olde 'nother shoe to drop Aye...
Wifey and I managed to wrangle the poor thing out without any injury to us nor ye olde birdie.  Poor thing was pooped from running from one side of the house to the other, and finally it just up and oot the slider out back.  Via Con Dios Birdie-Babe.  (Wifey told me it was a female, she's good like that with certain things, like male versus females on aviary.)

Which then brings me to other things like the fact that I was poking around in my pile of books I had dragged out from the power outage the other day.  Mike from CF and I have been having some conversations aboot weirdness and whatnot, cycles of weirdness, co-inky-dinks and what, when I found meselves finding this: 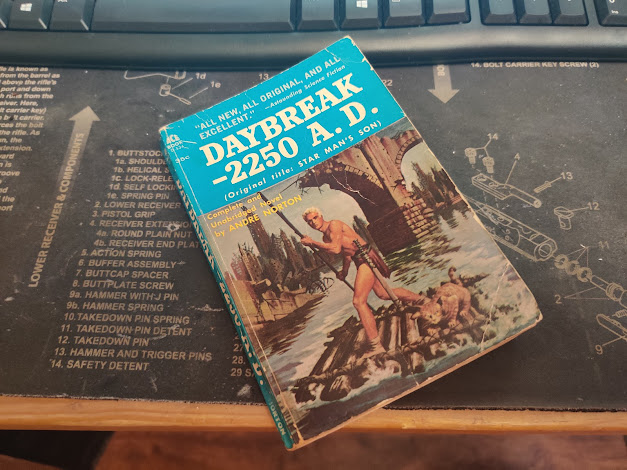 That's a 1952 original copy of Andre Norton's "DayBreak 2250 A.D."  OK post-apocalyptic sci-fi.  The usual Norton stuff.  Thing is, the how, when and why of this particular copy is where the weirdness kicks.  Dr. Dad had taken the promotion to "DeadDad" about 2 days before.  I was in Baghdad, and have been over those particulars before.  I was getting back in the groove, as I'm wont to do, and went over to the Liberty MWR (morale welfare and recreation tent, three lies for the price of one) where the 'donated' book that ALL the civvies gave to the troops went to die so to speak.  Mounds and piles of books.  I still have quite a number that I got as the kindle and whatnot hadn't really 'taken hold' and lets face it.

Books are book.
Old Friends to be well-met, enjoyed and savored like a fine cognac.
Anyways...
I was perusing the rows and rows... heaping stacks and boxes full of cast-offs shipped randomly from    the states... when I came on this copy.  Moments that take yer breathe away.  Reason?  DeadDad had this exact copy that he'd given me and that I read over and over back in the day.  I don't know what happened to MY copy that he'd given to me, but some of the Sci-Fi I have are original early 1950s Heinlein's and whatnot, Asimov, all original first round publications... Ace Paperbacks like this one... the cover price for Norton's?  try $0.35 cents...  rare as fuck by todays standards.  I treasure them all, and the "Star Man's Son" copy?  Beats the ever-loving-hell out of what happened to that book, as I'm normally anal-retentive as fuck aboot my library.
And here I am, in a shitty MWR tent, in Baghdad, 2009.  And I find the exact copy of one of the books I so enjoyed back in the day, in absolutely stunningly good condition?  Yeah, I may not have gotten along so good with DeadDad, but this was definitely some sort of freaky message-from-beyond.
I'm re-reading it this week.
Yeah, odd things.  That's also why I'm worried about the Bird, 'cos the Bird?  Hoping it's not a message from 'on high'... Rather dodge that particular memorandum for record, as do the majority of us Aye?
Now, MOR practical matters:
Now y'all know I got 'muh COVID vax'
I got a card that sez I got it.  SO, I decided to get me one of them thar high falutin Vax Passports, using me card.  Saw this outfit on the newz... looks like they -might- be in line to be one of many groups that're gonna be issuing the possibly, maybe, we shouldn't-but-are-instituting a vaxx passport. 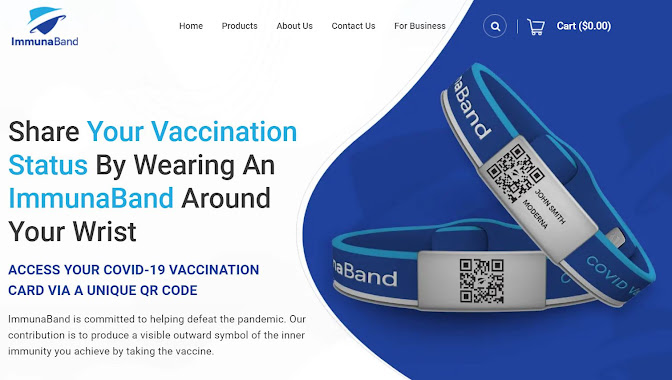 Dunno if'n they're sharing the intel that gets dropped on them (they probably are)
BUT hey, if they do?
So much the better
Means that I'm 'offishully jabbed' and they might leave me the fuck alone. 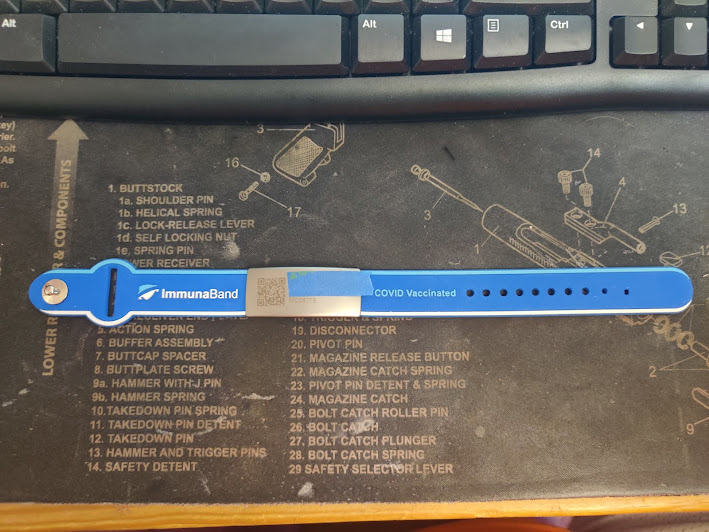 'Cos I got mine a lil while ago
I'm vaxx'd and passported now
Had to add a couple of holes to the band as my thick assed wrists are too big for that puny-human standard sized bullshit.  In fact, I actually have two bands by accident.  My first, well it disappeared.   Like NO clue what the hell happened to it, and since I started wearing it, I love the conversations I get into when I -am- wearing it... I'm sooooooo out-justicing the SJWs when I'm wearing it.  It does cost like $25 but I consider it $25 worth of well spent camouflage.  So, #1 grew legs, (turns out we found it, Bob apparently thought it was a great cat-toy)  and customer support was GREAT!

Re-made it for me for $15 'cos they have to engrave your name AND the custom QR Code which matches up to MY personal file... yeah... they go that deep into it... the QR code is supposedly only readable IF you give the secret squirrel unlock code.  Go to the website, check it out, and if you have a vax card, I'd suggest a good idea to get the 'acceptable early-on adoption' of this passport.  Especially since it -on you- to provide the 'accurate information to Immunaband regarding your vaccination status.'  Out-Virtueing the Virtue-less is soooooo satisfying.  That and the two-tiered society they seem to be hell bent on making?  Better to have perfect papers early on before the door slams shut.
Make of that what you will.
Before they get their collective shit together Aye?
So, More Later I Remain The Intrepid Reporter
Big Country 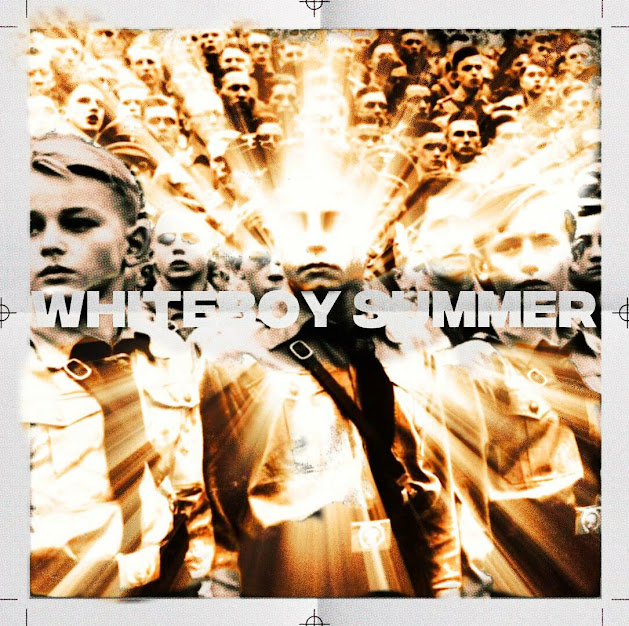 Posted by BigCountryExpat at 10:31 PM