Greetings Me Droogs N Droogettes!
Whew... full times 'round here.   Finally got nephew on the road back with his Pops, and they're on the road to continue 'other family visits'.  We got GranBebe here for the week, (our turn) and the new training is the whole potty training thing.  She gets 'it' but doesn't.  Time to get her squared away so's we can start pre-k.
Now, for me, being busy as hell, sore and mean, I said the hell with cooking last night.
Dug out a past-due Polish MRE... 'theoretically' expired on 11-2020.  Now, as with 'Murican MREs, as far as I can tell, the expiration date is more of a suggestion.  Steve1989MRE on YouTube has been known to eat 100 year old field rats.  Dunno how he's still alive.  The one that he ate and cracked me the hell up was the infamous "Five Fingers of Death" as we called the original dark-brown wrappered "Frankfurters and Beans".  5 of the most heinous hot dogs ever.  And the beans?  The ominous warning and somewhat mysterious "Bean Component: Not for pre-flight use" which always raised the question of -what if- you ate them right before taking a plane?  Shit yourself to death?  Puke?  Dunno.
So, with the idea that a lot of the Euro-MREs are more of a 'commercial container' as opposed to the foil envelope a lot of other countries like the US has, I figured to give it a shot, and I was also lazy, tired, sore and didn't want Wifey within a mile of the stove... How can toast have bones?
Jes' Sayin'
And to all who ask, I tease her about that on the reg.  So, anyways.  This one was a "Beef and Buckwheat" Polish MRE: 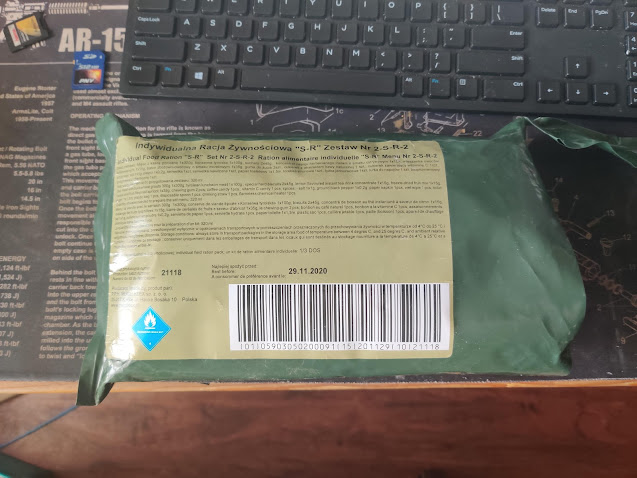 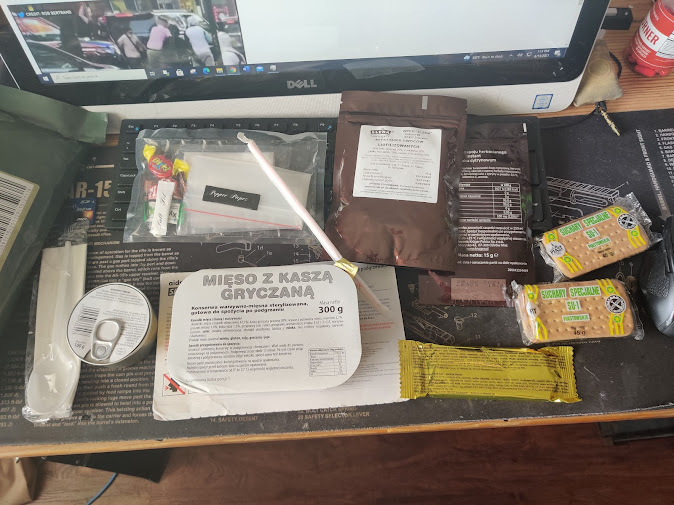 Main Meal in the big thing listed as "Mieso z kasza gryczana" which was the Beef and Buckwheats.
Two packs of crackers
A packet of dehydrated fruit
A fruit bar, (apricot I think)
A small 100 gram tin of 'bacon', which means Eurospam.
A herbal energy drink
Spoon and accessories pack: 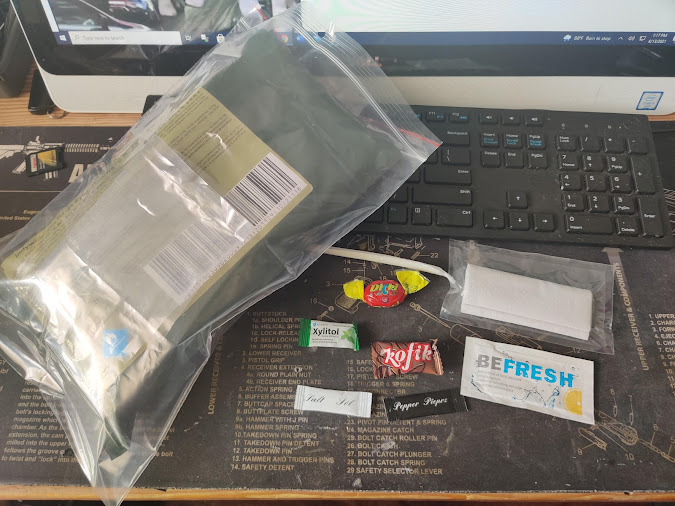 Salt, pepper, couple of hard candies, gum, toilet paper, wet-wipe and a bigger 'garbag bag' to stuff everything in when done.  It also had the obligatory flameless heater, which as I've observed before beats the ever loving shit out of the US MRE heater... gets the food hot 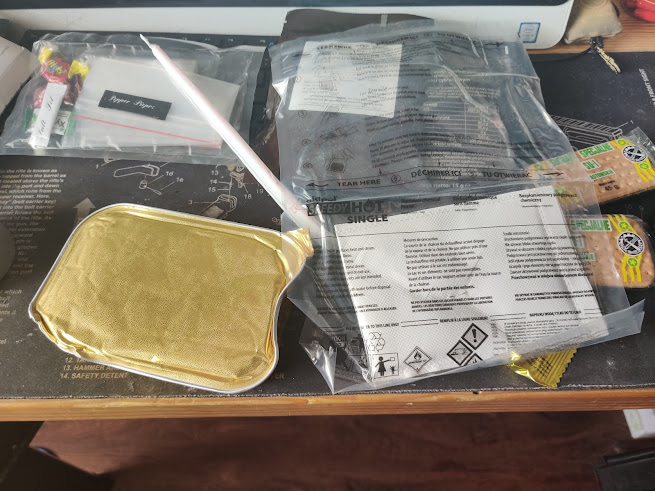 Big stuff sack too with pleanty of room, as opposed to the US model which -barely- fits the main meal pack, never mind anything over-and-above, like say the taters if there was a secondary meal pack. 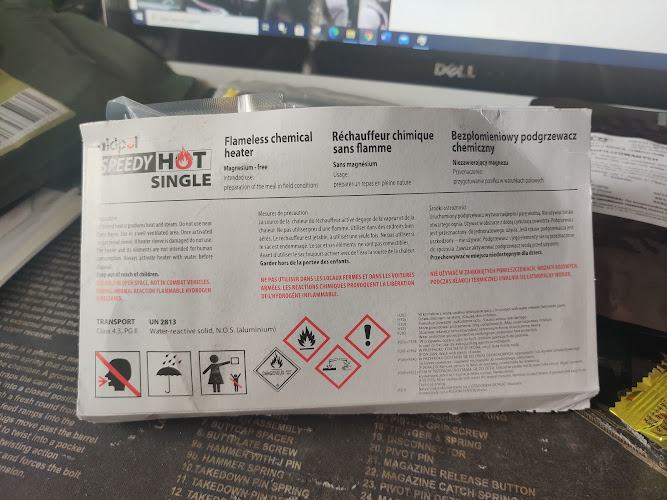 And it stays hot... unlike the 'Murican POS.
This thing could heat up multiple meals methinks.
So... I heated the thing up... maybe 10 minutes and pulled it.  I had to actually let it sit b/c it was actually too hot.  Ever since all my time in the Army and in chow halls, I can't have 'hot-hot' food... literally too hot and the skin in my mouth starts peeling.  Too many years of lukewarm chow I think.  So, on getting it pulled I opened it up: 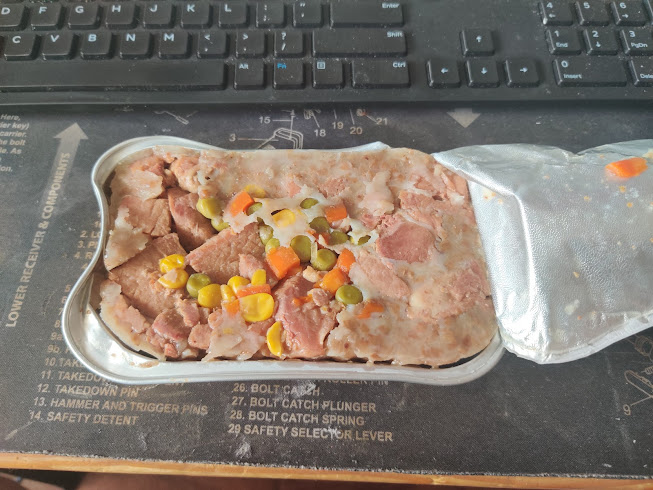 First Observations:
Smelled good
Visible veggies.
The white stuff?  Not fat as I first thought.. it's the buckwheats... almost like mashed taters.
And the beef? 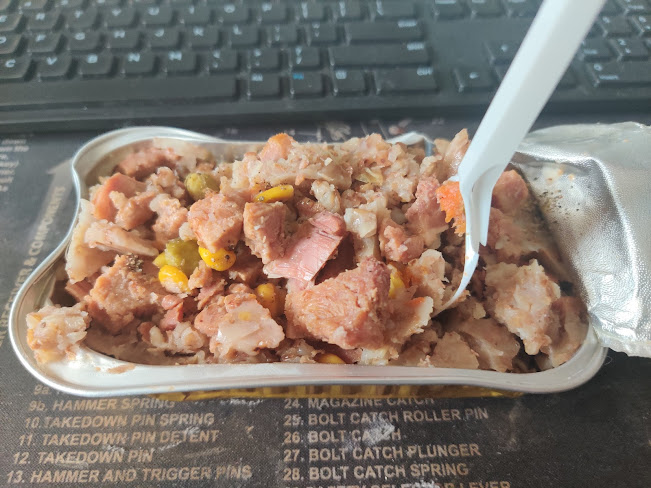 BIG chunks...
Tasted great
VERY filling.  Lots of real beef, as opposed to a 'Murican "horsemeat and shit" MRE... in fact major complaint I have about US meals is the shitty amount of proteins.  It's always a "beef"... more like a mystery meat is either brown or green sauce... with the sauce being 80% of the meal with 'stuff' floating in it... unidentifiable 'stuff'  The Brisket MRE being one that stands out... the 'brisket beef strips' look like the grill scrapings I used to pull off the grill when I was a kid working at Mickey D's, just not as tasty.
Now, the down side, I got these a ways back.  With shipping, about $25.  Now?  Like $40.  More real inflation there Aye?  Kind of a bitch too, because I could spend the Apocalypse chowing down on the Polack MREs.
So, thus is todays Poast.
I'm desperately trying to ab=void the poly-ticks of the day... just too much bullshit out there, and man, just how in the fuck do they think Slo is going to last the next few years?  Ain't no fucking way IMO.  He's a deader when they need to have him die... mark my words... he's going to be used as a 'martyr' somewhere, at some point to push through something that under 'normal circumstances' that shit'd never fly.   This G-7 showed just how far we've fallen, and it's only a matter of time til something real and serious happened where we genuinely get our collective national asses curbstomped.
So, More Later I Remain The Intrepid Reporter
Big Country 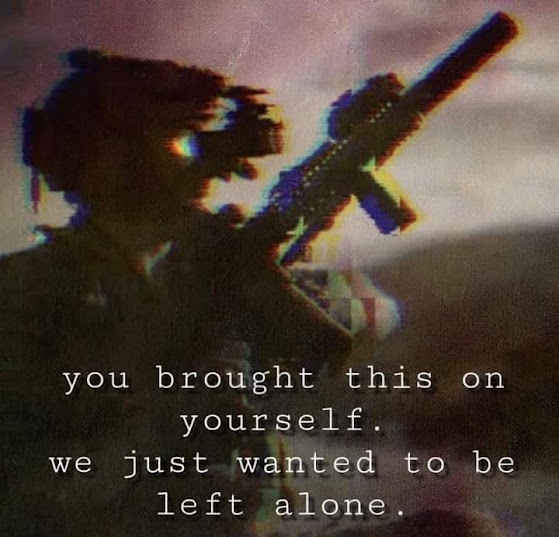 Posted by BigCountryExpat at 4:43 PM