How it Will Happen

Greetings Me Droogs N Droogettes!
First off, admin note: Trolls, don't bother.  I moderate.  As the Humungus said "Just go away."  No want, no need.  Lots of shitty people out there.  Get fucked Aye.

Now, onward.  In keeping with Slo Xi Bi Den and his "Nook-a-clear weapons and F-15's" speech yesterday, I thought I'd continue with my discussion of just "how" things might start shaping up. 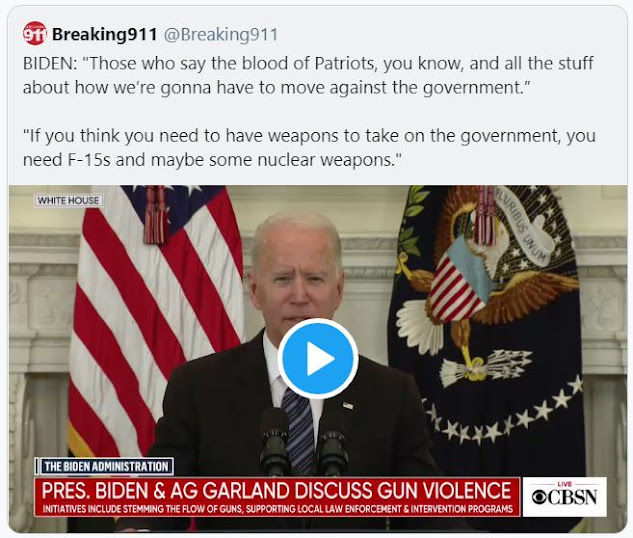 It's a bit like Bracken's "Dear Police" letter he did a waaays back.  More of a description of how -I- think shit'll play out if and when people get to the point where they have nothing left to lose.
Now, mind you THIS from a DotGov who's been positively screaming that unarmed protestors and trespassers almost overthrew the DotGov...

Which is it guys?  You either need Nukes and Fighter Planes or you don't.
Assholes
Any wonder we ignore them?
And then they're going to be genuinely puzzled when we start throwing rotten fruit and vegetables at them... in fact I'd say that's a great idea.  Every. Single. Time. one of these hacks appears in public, we should bombard them with rotten fruit, eggs and veggies.  Veggies especially as a symbol of Slo and his tater brains.
I mean what're they gonna do?  Charge you with Assault with a Deadly Veg?
Better yet, get your 14 and 15 year old kid to do it.... Yootful Prankage Aye?
So, the way it'll go down:
-Someone- is going to get cancelled/arrested/unpersoned as they used to call it in the Soviet Union.  Now, depending on the level of it, maybe someone's dear ole Dad gets hemmed up and jailed for political issues.  Or, worse, say the State of Florida decides to no longer follow the edicts and increasing crazy from the FedGov.  And someone gets arrested for having a Florida Driver's license as part of the 'rebellion'.  Far fetched?  Dunno.  I'm spitballin' here... either way, someone, somewhere, a dick gets trod on with golf shoes.
And someone decides that now, it's personal.
However, one can only 'nibble' at Leviathan.  I mean all well fine and dandy to dream of going after the J. Edgar. Hoover building in the District of Criminality, like in the Turner Diaries.  It's another thing altogether nowadays to pretty much resign yourself to lil annoying bites and nips here n'there.  Back when that moron wrote that shit, the surveillance state had nothing on what we got nowadays.

As I said on Gab the other night, 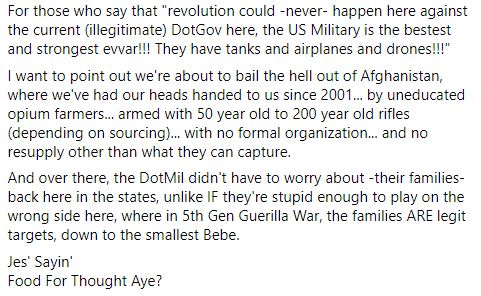 Yep.
Lots of agreement from the hoi polli Gabbers
Now,
If something goes sideways, it'll be the FedGov depending on FedAgents to enforce and be the bully boys like Bracken wrote about in "Enemies F&D".  The DotMil, while being currently pozzed out of it's mind, it's not completely stupid.  Outrageous dumbasshattery aside, the Troops?  They can get ordered all. day. long. to -do- shit, but ain't shit gonna get done.  If anything, the DotMil is going to 'hunker in the bunker' and stay the fuck out of the whole thing, 'cos like I said, their families come first.  In fact, watch for a migration of off-base peeps moving ON base if you want to have a strong indicator shit's about to get really reelz.  It'll take word of mouth to get that sort of news though... not that the Ministry of Propaganda is going to say anything.  I have a lot of Chair Farce kids from McDill who live in my A.O... you can be sure if they all start pulling up with rental trailers and vans to load some shit into them all around the same time, it'll be noticeable.  Means they're getting the fam out from possible reprisals.
Now, as far as FedGov workers outside of the DotMil?  Whereas the majority of the morons who're still working in Leviathan?  At some point, anyone who's working there has to now know, without a doubt, that they're on the wrong side.  The FedGov has been revealed as fuckin' corrupt as the day is long.  The FBI?  Evil. Period. Fucking. DOT.  I mean yeah, lotsa folks went in with the "I'm doing this for my country 'cos I'm a patriot and want to make a difference!"
Lots of us joined the DotMil for the same reason.
That lasted until week 3 or 4 of Basic...

Is it cynical?  Hell yeah.  It's a paycheck.  It rapidly becomes a paycheck.  Then, as time goes on, and the more time you spend, you aim for the retirement.  Once that comes,  the cynicism is complete and total.  Realizing that you spent the majority of your youth in pursuit of something intangible, one quickly realizes that you need to live on something AFTER the fact.  High ideals and patriotism and whatnot don't put vittles on ye olde table.  It's even harder after a hardcore life, when the knees are shot-the-fuck-through and the spine has had not 3  but 4 surgeries, and you can barely walk.  ...at least in the DotMil you have camaraderie, or leastways you used to.  Now with the current pozzing?  Notsomucho I'm guessing.  You can gar-ron-damned-tee that they'll watch out for their families.
Fine and Dandy to be all "I'll drone those Islamic errrr... right wing whypeepo superpreemercists to death!!!" when you're located a full continent away and your family safely ensconced in home and hearth.
So here's the thing fat: when your at work, "doin' the do" -someone- kicks in your front door, and butchers every. single. person. in your house, as well as the family pets.  And then waits for you to get home, and does you too, AFTER showing you the severed heads of your fam, and letting you know that this is the price you pay for taking Leviathan's Groat.  Your failure at that point is complete and total.  No memory/progeny for you.  Your. Line. Ends.

Probably get the whole thing on vidya and uploaded to whatever the flavor-of-the-week host that shows utterly gruesome shit out there.
Maybe ogreish will make a comeback?
Tough call, but the revolution will be broadcast in all it's horrorshow and ultraviolence.
Best to note it if'n your part of the problem, as you've legitimized your participation on what's turning out to be the wrong team.  Everyone will eventually get 'touched' by this shitspatter.

It's unavoidable.
As Spike Lee used to say: "Do the right thing"
All you have to do is look at some of the pictures of the people who've run into 'real life'.  The ones of AntiFa who fuck with the wrong person and get the scars to show it.

The stunned deer-in-the-headlights looks are classic.
Again, Keep it in mind.
So, More Later I Remain The Intrepid Reporter
Big Country 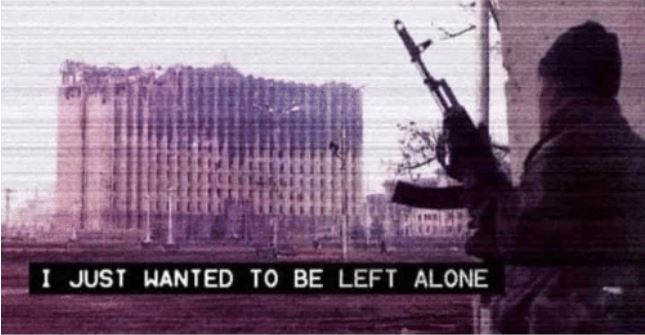