Up To Speed and Pancakes

Greetings Me Droogs N Droogettes!
Got the M1A -done-...
For the purposes of 'done' that is.

There is always something 'else' to work on, be it a trigger job, rail mount, bipod... in this case when and IF I can afford it, there IS an aftermarket picatinny rail that replaces the front sling swivel.  Allows you to add a picatinny mounted bipod, as well as a few slots which will allow a sling swivel mount...

$70 for a rail is a -bit- much in my current financials...
GranBebe is outgrowing her clothes like a motherfucker as of late...
"Growing like a weed" is a serious understatement.  I can tell when she's growth-spurtin' because the way she chows down.  The other day?  OtherGrans discovered these lil baby frozen pancakes... we make sure the favorites are co-located depending on where she is at the time... duplicate everything to continue 'normal' for the means of 'normal' 'round here... Anyways, each one of them is about the size of a silver dollar... a big ole pouch of them?  About $8 for a huge bag, which has 'sub-bags' meaning they're portioned.  About a dozen per smaller bag, with the BIG bag being like a pound and a half...  Normally I'd mix m'up n'cook meselves, as I'm the head chef 'round here... that being said tho, Papi needs some down time now n'again, so's Wifey needs 'nuclear breakfast material' to keep the kinder fed and happy quicklike.

The last sitting of serious feeding?
Try two. whole. bags.  In one sitting... Easily two dozen mini pancakes.  And BTW, she -does not- eat 'em for the liquid sugar.  Nope... only butter on them, as she doesn't like the Maple Syrup...  which BTW as an aside... the stuff I have is real Vermont Maple sugar, from a farm I personally know the owners of... no bullshit syntho-maple bullshit allowed around here.  She doesn't like it believe it or not... but yeah, 24 mini pancakes, and no shit, a FULL box of Jimmy Dean breakfast sausage links.
Yeah... 12 oz of links... -the. whole. fucking. box.-
I was, as they say, fuckin' impressed.
That's "Infantry" level appetite.
That also being said, we got sneakers that she's worn -once- and she's already outgrown them. 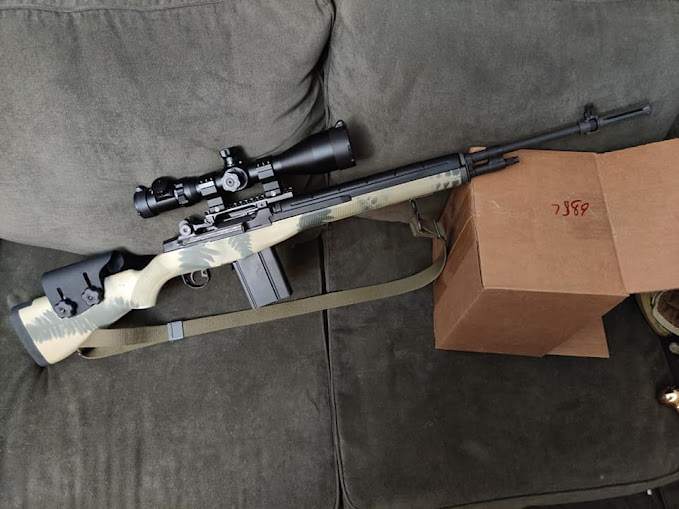 Added the kydex cheekpiece.  Cut n' molded it myself.  Got the screw set on the Zon...

40mm tubed Optic 6X-25X-56mm
UTG peep-thru scope mount.  I can use the NM Iron Sights with it w/out obstruction.

And then, from Wifey, she found and got me the patch: 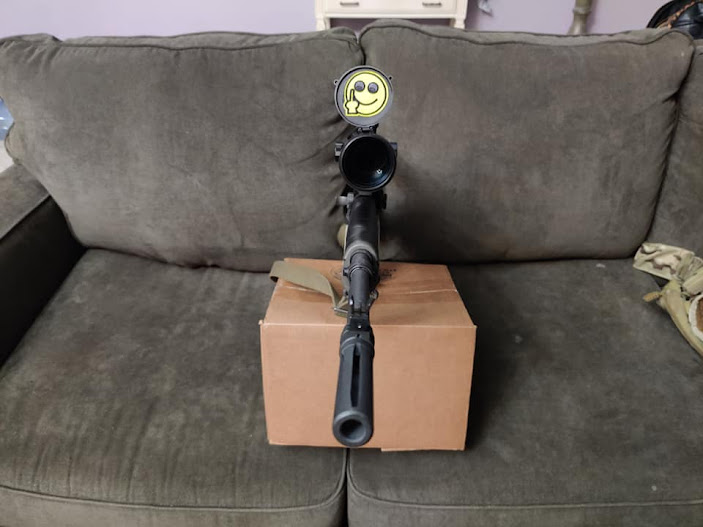 Funny Aye?
She understands me.
Only thing I might need is a anti-reflect honeycomb baffle for the front of the optic...
We shall see.
Otherwise, the range report will follow.  I'm personally very excited by the concept.  So, More to Follow, I Remain The Intrepid Reporter
Big Country 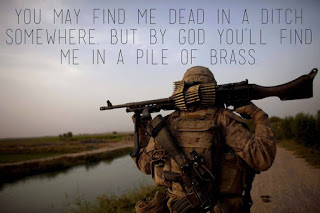 Posted by BigCountryExpat at 10:05 PM