That's a LOT of Firepower

Greetings Me Droogs N Droogettes!
Over the weekend apparently the Navy, rather than surrendering to the Iranian Navy, (color me shocked!) actually did -something- in the Persian Gulf and caught what appears to be an Arms Shipment that was ostensibly headed for Yemen.   The article from CBS is here: https://abcnews.go.com/International/wireStory/us-navy-seizes-large-cache-smuggled-weapons-off-75928604

Art Sido did a pretty good write-up on it as well here:https://www.arthursido.com/2021/05/where-was-this-headed.html
His question is where the hell was it going?
Mine is where did/they come from?
My reason for that question is below
Now, Yemen has been lit like a motherfucker for the past few years. 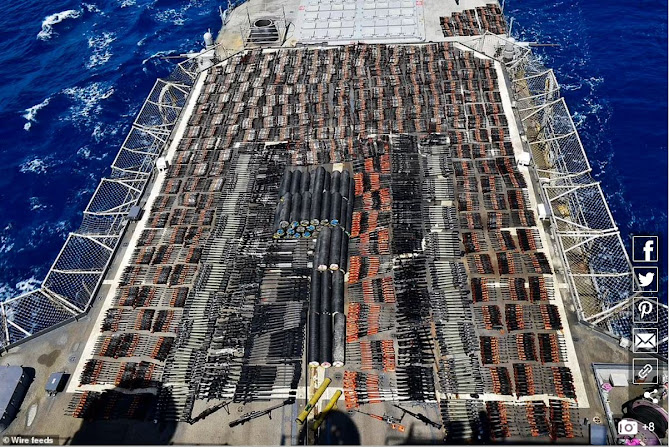 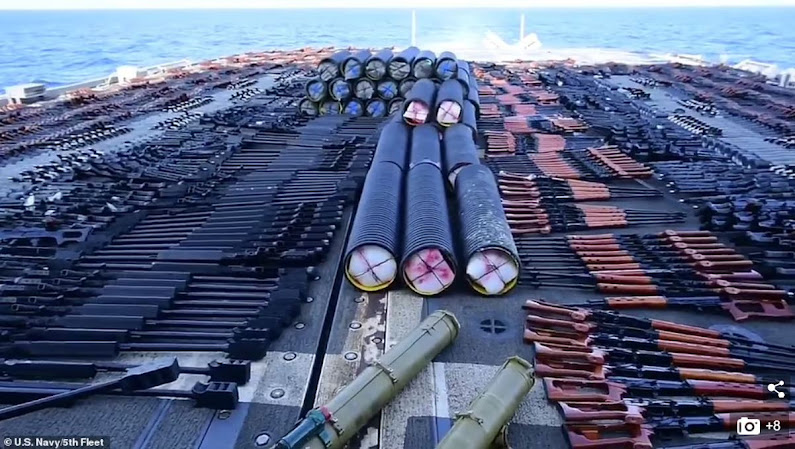 The top pic is taken from the upper decks showing the overall layout.  Must have taken quite a spell to do that... and in the Gulf?  At this time of year, you can be betting it was hotter than balls for the swabbies doing the layout.  The AKs seem to be the 'outer ring' and on the left of the second pic, taken at ground level, you can see the .50cal sniper rifles...
Which by some sleuthing I figured out what they are.  That distinctive muzzle brake flair was the giveaway.  And it makes it even more interesting.
It ain't Chinese, nor Russian, hell, not even Iranian...
It's Syrian.
A brand new design no less.  The Golan S 01 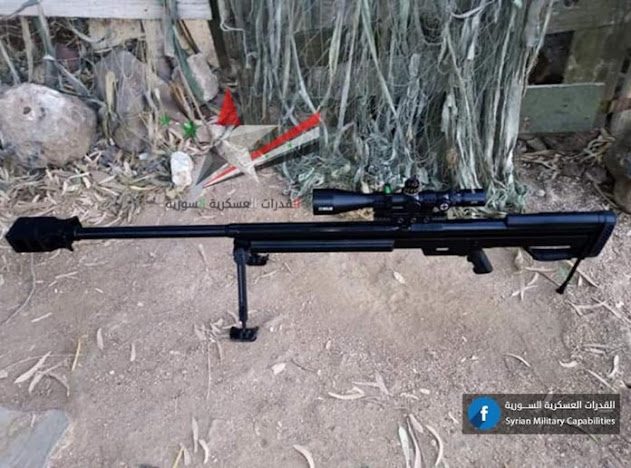 Flared muzzle brake? Check
Fat front grip? Check
Single Shot Bolt Action? Check
Announced/Introduced June of 2019... looks like a sort-of ripoff of a Barrett 99.  According to sources, it's modeled closely on a Steyr HS.50.  I took a Screen shot from the Daily Mail Vidya, which confirms my analysis: 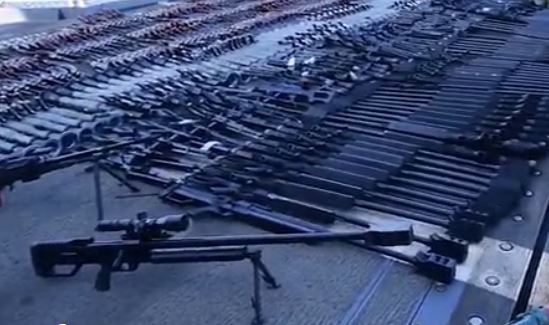 Raised cheek piece? Check
Hooked rear buttstock? Check
Wow... I got that one dead-on.
The reason I find that very interesting is just who then did load up the Dhow with this stuff?  I mean unless these are copies made in Iran, I'd be curious exactly where did those bang sticks come from?  I mean Syria ain't exactly in the Persian Gulf Region... and exports from there are likely stemmed to a trickle because reasons and shit,

The other 'stuff' appear to be standard PKMs and RPGs, and by my count? 200 RPGs, 200 PKMs, 100 NDM-85s that's the SVD/Dragunov Chinese variant, and 50 of the Syrian Golan S-01.  My count is based on the stacks appear to be in sets of ten, with the muzzles alternating in direction, so each stack is 10, and counting the stacks of Dragunovs in the upper deck pic, there's 10 stacks going towards the stern.  Those bright orangish stocks make it easy to count them.  There's ten stacks of them, 5 stacks of the .50cal, and then a shitpot of AKs surrounding the whole thing.
I'm still pretty pleased with finding that Syrian rifle tho...
It still makes me wonder... just where did they come from?  I mean last I heard Syria wasn't in good shape militarily speaking, but then again that's coming from our newspapers/Ministry of Propaganda Organs... They either want the cash or they're copies made by the Iranians.  Either way, 150 precision rifles?  That's a hurting for whomever they were intended to kill with them.  I would expect the Syrians to hold on to all the firepower they have, rather than export it...

Sapper thinks they need the monies.
I could see that but still...
Tough questions.
But figuring out that it's a new Syrian Designed and manufactured Anti-Material Rifle begs a whole lot of other questions, especially in light of the distances and whatnot.  Syria is sort of waaay out of the way compared to the other players in the whole Yemen shitshow.  Very interesting Aye?
Then the RPGs... That too has a bit of a mystery in it as well... there aren't enough close up to see, but they appear to be standard RPG-7... however, the thing that's bugging me is the heat shield.  They're gray.  Now, not for nothing, ok, whatever, weapons evolution, and wood and bakelite is relatively passé when it comes to modern weapons.  That being said tho, the 'don't fix it if it ain't broke' also comes into play.
So, doing a deep dig, literally the only variant of the RPG-7 that has a gray heat shield is made in Bosnia of all places... 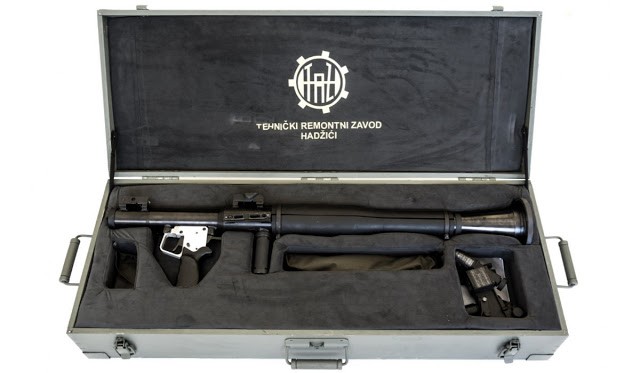 Man, tough call on this one...
The Bosnians make their own upgraded version of the RPG.  It's the RPG-7MX2.  Milled as opposed to cast... Better lifespan, and works with ALL the available ammunition ot there to 'feed' one.
Mainly because the pics on the ship don't give enough detail to really tell... but IF it is the Bosnian model, then wow...
And the BIG tubes?
Easy... Russian Anti-Armor missiles.

The tube marking "9M111M" under that circled written number...
That's the designation identifier for the "Faktoria" 120mm Anti-Armor missile 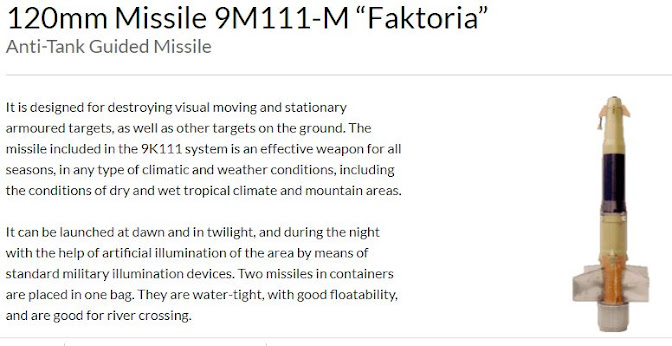 Quite the UN of weapons.
Russian Heavy Anti Armor rockets
Bosnian Light Anti Armor launchers
Chinese Sniper Rifles
Syrian Ant Material Rifles
Chinese PKMs
and lastly
Chinese AKs by the bushel.
Wonder where the magazines and ammo for all of these are?
Man... I love figuring out some weird stuff like that.
Guns have always been my passion, and that sort of mystery is a favorite of mine to solve.
So, the -where- were they going is interesting, but not as interesting as the sourcing
Part of my fascination is because of my time in Iraq.
My personal weapons collection was pretty diverse. Probably the only time diversity is good. 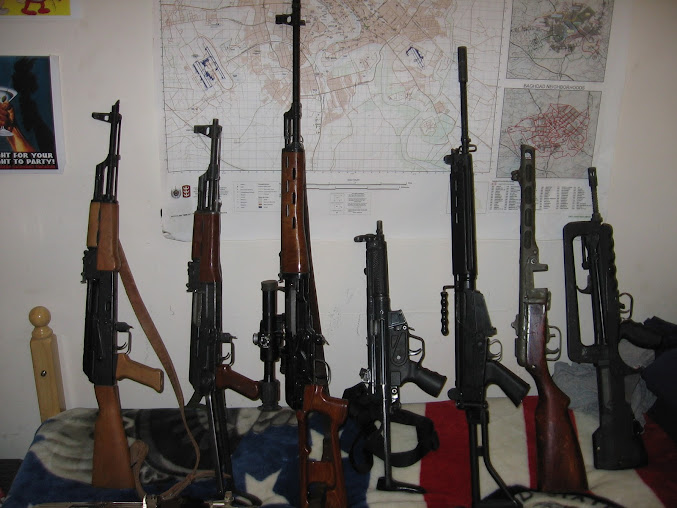 I really wonder where -some- of these things came from...
The stories behind them...
Now, the AK on the End? With the blonde furniture?
American made... VERY oddball... probably a CIA built weapon.  It was factory select fire.
The next was a Type 56 Chinese AK, then my Dragunov, and then a MP-5A1, the FN-FAL htat eventually blew the fuck up on me, and another pair of oddballs, the PPsh-41 and the FN-MAS.
No clue where those last two came from...  then the handguns: 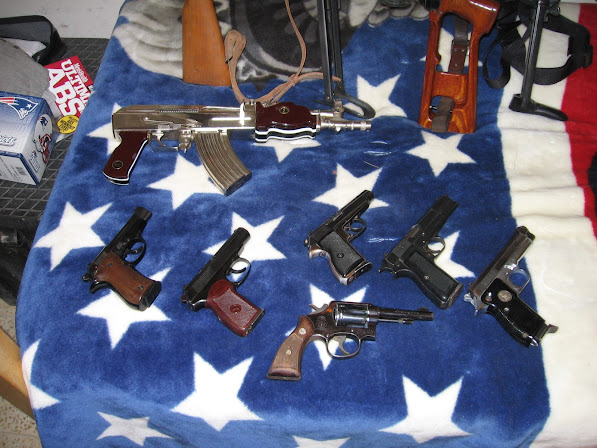 One of the sterling silver plated AKs, a Beretta in 7.62, a Makarov, a Walther PP, a Browning Hi-Power, and a Tariq, a Iraqi made Helwan knock-off, and lastly, a Smith and Wesson .38.
I got a kick out of having them... as seen in Charlie Mike Comix #1, the story of what happened to all of them, AND the other 40 or so AKs and whatnot that I had accumulated made for a funny story.
So, that being that, More Later
I Remain The Intrepid Reporter
Big Country 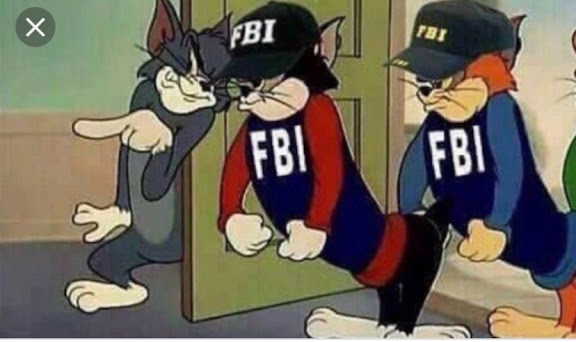 Posted by BigCountryExpat at 11:55 AM