Greetings Me Droogs N Droogettes!
Good ole Miscalculating Maricon...er...Macron in France is in a whole heap-a-trouble that I can see.  Troop trouble from the looks and sounds of it.  I covered the story about La Belle France's Generals and whatnot throwing down the gaulish gauntlet at the Politicos for their retarded actions.
Essentially, the French Military, which has been fighting the Global War on Terror, which is essentially a systemic battle proxy for Islam and its bullshit.  The Frog Politicos however have been importing metric fucktons of Islamics and playing "Hug a Raghead".  The guys on the front line are fucking done with all the societal concessions, and the very fact that HUGE amounts of France, especially Paris are overrun with ungrateful non-integrating Haj.  Essentially the fact that every two weeks a precious and irreplaceable Christian Religious site gets either burned tot he ground or desecrated. 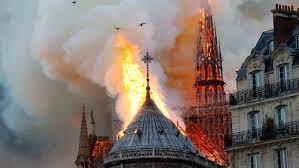 Fuckers even burned Notre-Fucking-Dame man...
I'm amazed they (the Frogs) didn't start slaughtering the Haj en-mass at that point.
See, it's a soft invasion.
They're slowly but surely infiltrating all of Europe, and using the Globalist Fuckheads to install a new "Quiet Caliphate" as I call it.  The QC is there, it's real, and it's inherently against everything that a nominally Christian country stands for.
And the French DotMil
They have had it
The very fact that huge swaths of Paris alone are no-go Hajji Zones..
The fact that politicians prefer to stay quiet and allow the continued rape and pillaging of their countries, knowing full well that they (the politicians) never have to suffer for any of the actions that they instituted.  Like importing and supporting via vast social monies and support, a hostile Islamic Invasion force.  The Cloud People indeed
So, the DotMil, both active and retired wrote a letter.
Called 'em out...
A friendly warning...
"Fuck around and find out" was the essential gist of it.
Whelp.. Maricon and his retards did the exact thing I thought they would.  They doubled down on "stupid", and are investigating, censuring, and even pulling pensions for that letter.  They're shitcanning the guys who -were- on active duty, and starting a very similar deep dive on all DotMil for 'extremists'
Sound familiar?
Soooo now? In response The Active Duty Troops wrote a letter.  An open letter, online.
As of yesterday, 100,000 'normal' people had joined in to sign.
https://www.rt.com/news/523363-france-military-civil-war/
In part: "Cowardice, deceit, perversion: this is not our vision of the hierarchy. On the contrary, the army is, par excellence, the place where we speak the truth because we commit our lives."
In other words

THAT has to be one of my finest Memes evvar
I googled 'angry soldier' and looked thru all the pics...
That dude right there... I dunno... just struck me as "Pissed off French soldier"
A zoom in and add the redeye... perrrrrfect-o
And yeah, I think the guillotine is in the future for the politicians in France.
Rule #1 in politics: Never, ever, ever fuck over the guys with guns
Democracy or not, there's only so much people will put up with
Hence the attempted purge here in the States.
The generals, all bought and paid for by the Obamamessiah's clique.
They know that actual triggermen are alllll lower ranks.
The corruption usually starts in the Officer Ranks...
Especially in West Point and the Naval Academy... even the Air Force these days.  ALL of them went woke-as-fuck.  And it shows.  The lack of critical thinking, hell, basic brains is stunning.  I mean shit, I was in the Infantry.  We aren't know to be fucking rokkit scientists.  We're Grunts... eat, fuck, kill, and sleep.  Good Grunt, have a cookie... but even a Grunt can see how fucked things have become.
France is just the first, because they've had the Haj issue pretty bad.  I personally think it's because they have been losing priceless National Identifying Religious Institutions.  I mean the average Froggie probably may not be all that uber-religious per se, but the French National Identity is wrapped up in it's history, monuments and whatnot and it's Religious Monuments are testament to that.  The fact that the foreign non-integrating animals are destroying that, and the fucking Mini-Maricon Mommyfucker (look at his wife... the very definition of a Grandma) is covering for them?
That's a Beheading
Should be interesting.  Have to see where it goes.  I could see Slo and the Ho trying to 'assist' their Globalist Partners militarily if the French DotMil goes full retard-revolt.  That'd be purely hilarious as the French don't fuck around when they get their  'revolution' on.  They have a history of doing that shit to the extreme.
More Later I Remain The Intrepid Reporter
Big Country