Greetings Me Droogs N Droogettes!
Talked to MomUnit this A.M. with the obligatory HMD Phone call. 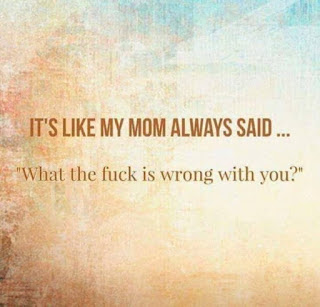 Yep... many a time MomUnit asks...
She's still got the whole "Staying locked down" shytte going on, as she pretty much -only- watches CNN and St Fauci.  Tell ya, if something -untoward- were to happen to her, and I can't see her because of this bullshit, someone will purely fucking die.
She won't even let me have flowers delivered because of this shitshow.
Whatever happened to "15 Days to Flatten the Curve?"
Ahhhh yes.  Our OverLords got a taste of being 'fully in command' and they sure as fuck ain't going to relinquish that self-appointed power... not willingly is my bet.  No matter... the pressure cooker is burbling along quite nicely.  Plano Texas was a prime example of that the other day with BLM doing their usual.  Blocking traffic with the cops not doing a thing.  In fact one of the protestors drew down his handgun on a rather sizeable man who was highly pissed off with the whole shitshow...
Pictures courtesy of Miguel at GunFreeZone: 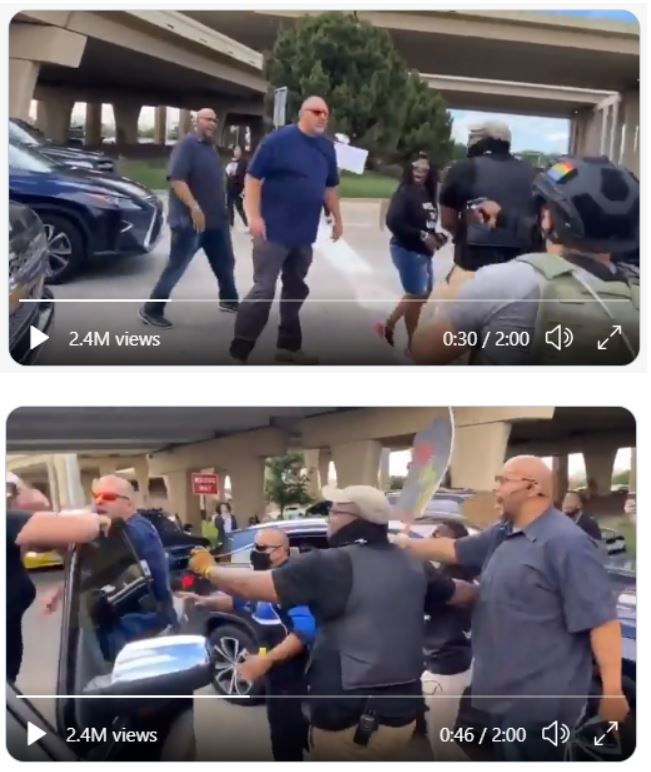 Dude sorta looks like a gone-to-seed Goldberg from WWF back in the day...
But yeah, the cops hassled the Big Guy as opposed to busting the guy who as far as I can tell, by pulling that weapon, that's felony assault with a deadly weapon, nevermind all the other shit going on...
But as of now?  No arrests
Of Course
Because the Powers That Be for some reason want to keep this shit up.
Which, historically is a bad idea
'Cos I can tell you this... Matt Bracken wrote about how to deal with shit like this, and I'm sure shortly, it'll come into play...
Word'll get out about this sort of shit happening.
Either by police scanner or whatever
Couple of like-minded individuals will go via pickup and find an overwatch A.O.
Drop the tailgate and start picking off assholes at 500 to 1000 meters
Suppressed weapons will keep it nice and quiet.
Co-operating individuals on the other side of town could light off fireworks to keep any shot-scanners from proper triangulation.  But even IF they were to be picked up, 3 shots each, 3 heads each, and out.

Quick, clean getaway.
Couple of sniper attacks like that, and this 'playing in the streets' shit will dry up and blow away like dust in the wind... As I've always maintained, it's all fun and games until you find yourself rinsing Bobby's brains out of your hair... or in this case De'ontye or Shaniquilla.  Either way, go for the head.
Make them into -good- BLM members.
So, yep.  Apparently the Big Guy in the pix has now been fully doxxed also... BTW... No word yet on if he lost his job yet... but I do gar-ron-damned-tee that if it were I?  Oh yeah.  That's time to go game on.  And these petulant children just don't understand that
Because the Powers That Be have not spanked their asses, when the Normies decide to start ventilating craniums, they're going to be in a state of shock methinks.  "Why are we being targeted by Right Wing Death Squads?" said every moronic communist/leftist when they start getting turned into mobile organ-donations-waiting-to-happen.
Gee, I have no idea why the man whos life you upended and destroyed has decided to kill every. single. member. of your extended family and slowly peel the skin from every inch of you before he finally kills you... not nary a clue.
Best Be Ready
'Cos sooner rather than later Aye?
More Later I Remain The Intrepid Reporter
Big Country 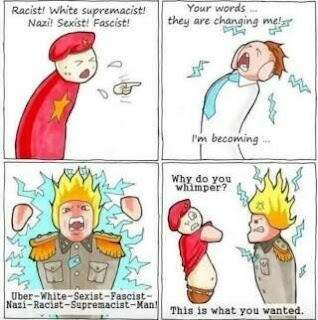 Posted by BigCountryExpat at 6:31 PM