Greetings Me Droogs N Droogettes!
'Bout fuckin' time Aye?
Longest month I've ever had to go through in one fucking week worth of bullshit.  Hit with so many rights, I was begging for a left.  Good news came in the form of some intel from Springfield.  Email showed up just as I was getting of of work.  I get it back on Sunday theoretically as I worry about the shipping companies.
Not for nuthin' too many fucking thieves working the various FedExUPSDHL groups out there...
Insured or not, I want my motherfuckin' rifle back.  That being said, they included an invoice with a breakdown of what was done to it. 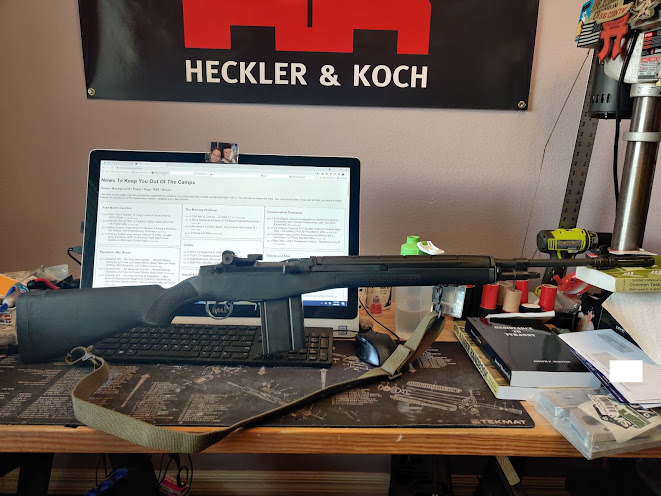 I mean shit...
It was quite the list of 'shit that was fucked up on it.
Biggest issue?  Seems "Gas system out of alignment" was the main culprit.
Which I never even thought of.  Research shows I -could- have futzed with it, but as it is under warranty, and I paid more for it (on credit that is) than I did my first car. I figured let the guys there do it.
I literally sent a 2404 with it.
Deadlined it Red X, no circle.
Figured it was the best way to get the exact issues across, as well as let whoever was going to work on it that this wasn't "Bubba's ry-ful".  I literally wrote up each round, what make, what load of powder, grain of projectile and what happened.  Failure to extract being #1, which the gas system being out of fucking whack would definitely be the issue.  They also refinished the bolt as on my writeup of what was wrong with it, I mentioned 'excessive wear' despite a shitton of lubrication.  I mean there's 'fair wear' then there was what was going on with this poor thing.  I worked on M-16A2 with Hydra-matic Lowers (only made 1968 to 1972 by a division of General Motors... a retooled Transmission line for making M-16A1s... later converted to A2s... long cool history there) but anyways, I worked on Hydra-matic M16s with less wear that this Springfield had after only 9 rounds.
They also listed that they had to refit the bolt to the barrel... Headspace?  Not sure.  Either way this thing better run smooth as a Prom Queen's thighs when I get it back, as I have -plans- for this bad baby.  Optics, mounts, a cheek riser... whoooole lotta fun 'stuff' future wise.
God knows after this week, even though it's not coming back til Sunday -sometime- I know that I'll be getting trigger time in sooner, rather than later.  If it gets here early enough on Sunday, I -might- have to go to the local indoor shit-range.  100 yards, single lane for retards... usually hotter'n hell and the range-geeks are uptight teen assholes who -think- they know something about firearms and firearm safety.  It's not that pleasant a place IMO.  The store itself is overpriced for such a volume dealer.  Sort of like BassPro...
I would never purchase a rifle nor pistol at a Cabelas or BassPro.  Fuckers are thieves.  Well advertised and huuuuge corporate thieves.  I actually applied to work at the local BassPro when it was opening, as I was between gigs and desperate.  That was before I lern't the trick of self identifying as 'two-or-more-races'... believe me, that works.  Let 'em -try- to prove otherwise. Aye?  But anyways, they didn't hire me, and man, when they opened, I was fuckin' glad.  I don't think my conscience would let me sell a basic, no frills Glock 17 for $600... I could never be a car dealer...  Only thing I -used- to get there was powder and primers... now?  Notsomuch anymore leastways.
I also need to put out a couple of thank yous... Couple of readers sent some donations for the Bullet Bean and Boot, and now apparently Booze fund.  My most 'umble thanks.  I also got a surprise in the mail today that's fuckin' cool as shit. 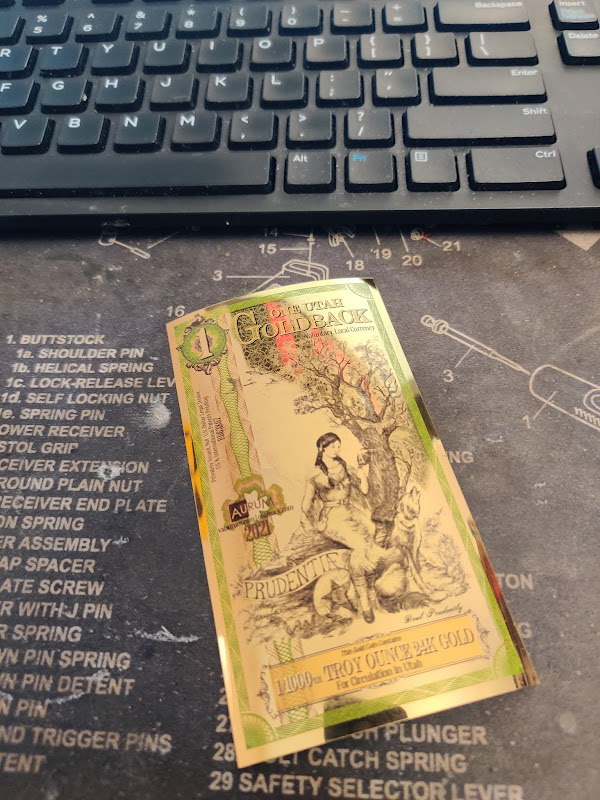 "Utah Goldbacks"  1/1000 of an ounce of gold in a plastic-style matrix.  Had to research it, but apparently they're getting really popular in the State of Utah, as it's real gold, serial numbered, and man, 20% of stores there take them according to a lot of independent websites.  Mac, thanks so much for the gift dude.  If the return addy is legit, leave a comment, I got a thank you for ya.
Funny thing is, I think stuff like that above is going to eventually catch on.  Fiat currency is almost completely fucking Weimar right now.  I got another bumped up offer on the Casa... this time 10K MOR this time around... The rate of increase is like double the original what was it$800 weekly?  Now it's like $2500 per week in valuation...
Helicopter cash... cray-cray warning of bad shit to come, mark my words.
So, good stuff today, hopefully a good ending to an otherwise shitty week.  I also, FYI, reached out to Old Lady and her Daughter... told 'em not to move, that we could work shit through, that I understood why they did what they did, and that I didn't have issue with them.  The unstated was that if he ever sets foot in this Area again, I'll snipe his ass in a clap shot from the front bay winder.  I really don't think it's fair that a 90 year old sweetie like her needs to uproot over this.  She needs to be chill and relax, and not worry about shit like this, as they've already had their lives completely shit-show upended because of the fucktard.
So, More Later, I Remain the Trying-for-Peace-and-Good-Karma Intrepid Reporter
Big Country 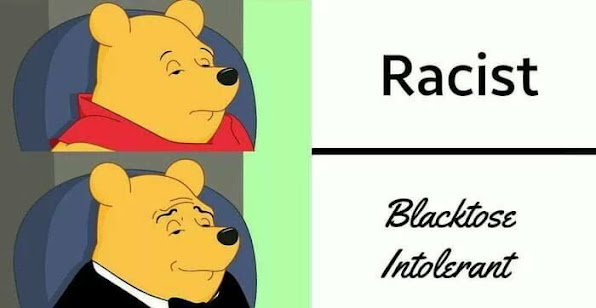 Posted by BigCountryExpat at 7:15 PM