Greetings Me Droogs N Droogettes!
Over slept like a motherfucker this A.M... or is it really P.M...
Crashed late.  Couldn't sleep.  Ended up being just -awake- which bugs the hell out of me when I'm like that.  No rhyme or reason, just -there-.  So, when I finally did crash, I apparently deactivated ye olde Alarums without realizing it.
We woke up at 13:30 this afternoon.
Crash much?
Comatose really.  Wifey woke me up with a startled "Oh shit!" when she realized we had pretty much wasted the day.  Nott too big a deal, BUT.  I had plans that needed to be done that're now off by a day or so... nothing critical, just annoying.
One on the things I hauled my dead ass out of bed to do was my cooking.  Been planning Sunday dinner alllllllllllll week and -really- looking forward to it.  I got a 2 quart can for baking that I'm dying to try something, namely: Doner Kebab
One of my favorite places to go when I was stationed in Germany back in the day was The Green Goose... those of you from the 80's/90's Army in Germany probably remember (or don't due to Alcohol Induced Memory Damage) "The Goose" 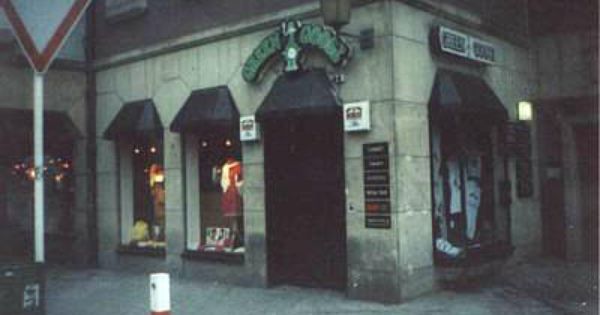 Best known for Heavy Metal, easy lays, and drunken Brawls, the Goose was one of my favorite dive bars to go to.  Alas 'tis no more though... it got priced out rent wise in the Old Part of Nurnberg around 2010...  That being said, if the picture was a bit further left, there was the Kebab joint that was the go-to for drunk munchies back in the day.
Prime food?
The Doner Kebab. 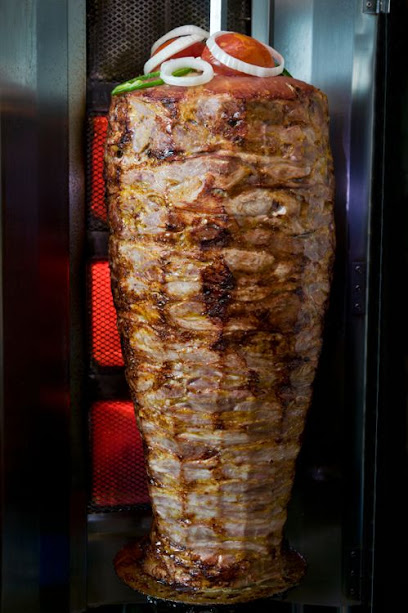 The picture really needs a halo around it IMO.
Natures best junk food... greasy lamb/beef/whatever, roasted on an open skewer for who-the-fuck-knows how long, served up in a freshly made na'an bread wrap, slathered in what-ever-it-is sauce and covered in lettuce tomatoes and onions.  Heavenly.
Had it all the time in the Middle East too, in various names, locations and ethnic flavor spins.  The concept is simple.  Pounded flat meat, added to a giant skewer in layers, rotated upright at high heat, continually cooking it from the outside in, and shaving off the greasy goodness as you go.
You can actually buy the cooker (around $1000) in restaurant supply places who usually also sell the pre-made giant assed 40 pound skewered meat that goes with it.  And no, Wifey nixed the idea dammit.  Said we don't have the counter space.  Dammit.
So instead I got the 2 Quart baking Can to try out me own version.  4 pounds of meat, 2x Australian lamb, 2x pounds good fatty beef... you need the fat to make this stuff work... lean means it'll dry out when you try to bake it... I did it before that way in a meatloaf tin, and it fucking sucked.  Dried out inedible mess it t'was.  So, this time I figured out the trick, and what to cook it in.  The 2 Quart Can was perfect. 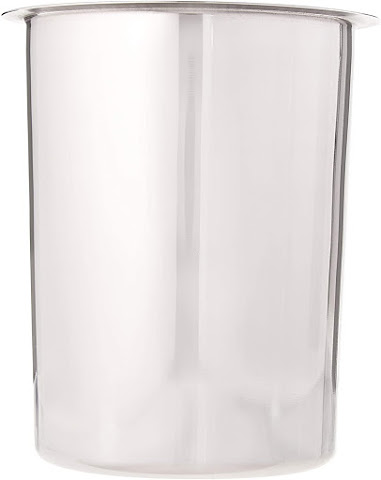 Took the aforementioned meetz and put it in the food processor.  You gotta blend it to mix it to a paste before packing the can, or it'll just break apart like chunky hamburger... it needs a full blend also to add the spices... I used two heaping tablespoons of Raz Al Hanout allspice to flavor it... next time I'll go with three... two was a good flavor, but not as strong as I'd have liked.  Also, next time more salt... I'm gun-shy aboot it because Sapper and Wifey don't like a lot of salt in the food, so's I tend to add it after to suit meselves.
Blended it, and then packed the can as carefully as I could so no air pockets in the meat.  After it was full, I took a long kitchen knife and put it down the side, between the meat and the can and made a small channel if you will so the juices had somewhere to accumulate... if that's not done, and juices accumulate on the bottom and come to a boil, it can blow the meat out of the can like a cork.
Then I put it in another small metal bowl filled 1/2way with water as a boiler/juice catcher.  In the oven for 3 hours at 275, and when the internal temp hit 120, I pulled it.  Then it was all about the fixin's.  Na'an bread heated to softness, a layer of Tatziki cucumber sauce, lettuce tomato and onions, and then carving/shaving the meat.
Now, to keep it hot as I shaved it, I hit it with ye olde Flammenwerfer igniter, a.k.a. my blowtorch.  Gave each newly exposed unburned slice a quick but adequate crisping on High to give it a crusting and heat the fuck out of it...
Ended up coming out pretty good, Doncha Think? 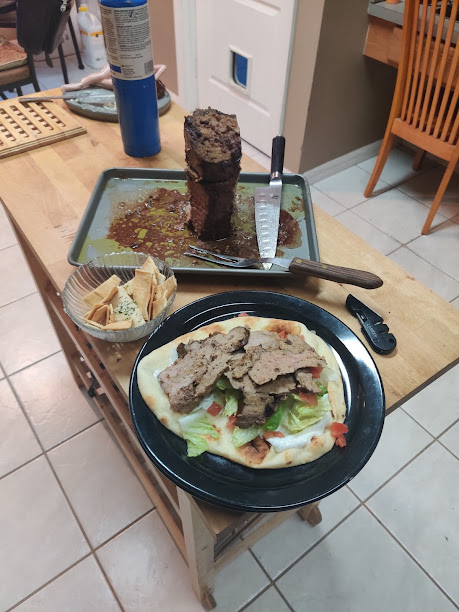 Normally I don't do the "Look at what I made" picture, but MomUnit was told aboot it when it was in the oven, and asked for a pic as she was intrigued.  Hummus and Pita chips for the side, and OMFG was it tasty
Wish I could do this sort of thing for money, but now, I'll just keep doing it for the sheer enjoyment of it... Hell Wifey loves the fact that I do all the cooking... she's got it made in that respect.  Next I might go back to making some Chinese Pork Spare ribs, and I still have a batch of Scotch Eggs I have to bake up... So, More Later and Regular Rants to Resume Monday The Intrepid Reporter
Big Country 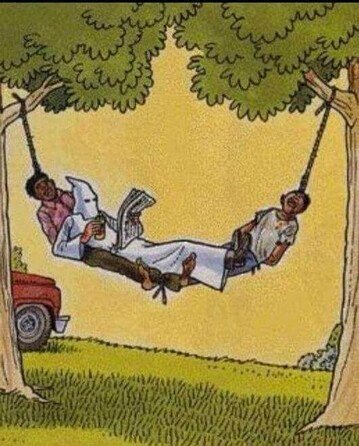 Posted by BigCountryExpat at 7:36 PM