No One Can Take a Joke

Greetings Me Droogs N Droogettes!
Yah.. No one has a sense of humor anymore, leastways not in public...
The miserable Twitter Bastards have now set their sights on Pat fuckin' Sajak of all people.  Not going to link the story, as links have been funky as fuck lately, but apparently, Wheel O Whatever dude is in deep shit after last nights broadcast. 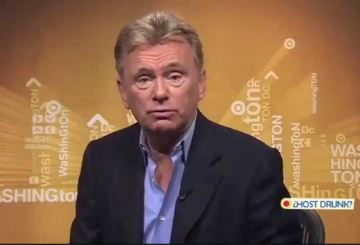 Seems a contestant had a slight lisp... people are going the fuck off in outrage over the following:
"The longtime game show host was trying to keep things light during Monday’s show as he was introducing contestants. While doing so, Sajak spoke with contestant Chris Brimble. After explaining to the host what he does for a living, it became clear to viewers and the host that Brimble speaks with a slight lisp.

Sajak heard him out and even commented on the importance of his job, bringing technology to older adults. However, the host concluded the brief interview by saying "I thee" instead of "I see."

While Brimble simply laughed the moment off, viewers who were upset about the Sajak's apparent mockery of the contestant’s speech impediment took to Twitter to voice their outrage."
Now, I'ma getting really tired of the faux outrage.
I know y'all are too.
When I was growing up, depending on how the dude who had the lisp looked like, we'd call him out as a lisping fag.  Now if the dude in question didn't have a problem with the tease, then what the fuck is the issue.
Too many folks have forgotten
Ain't yer circus, ain't yer monkeys
Stay in yer lane
Ain't nunya.   Ain't none yo fuckin' biddness there Combat!
Motherfuckers then wonder why mad violence is on the rise, nationally?  Lots of folks are blaming the 'no cops' issue which is part of the larger issue, especially in the inner city where Da Yoots run free and easy with their gansta bullshit.  Nope, I got a bit of my own theory here, and that is the new normal of people getting into everyone elses biddness.
Americans by and large are normally socially distant.  We tend to be really distanced compared to the Eurotrash and Ayrabs.  We -also- nominally really like our privacy.  We don't tolerate motherfuckers getting into our shit.  We even wrote it into the constitution, (not that that matters anymore apparently).
Stay the hell out of our hair Aye?
Good fence make Good neighbors.
But now?
Snitch Culture
"See something, say something" and the power of the Twittertards.
Everyone, no matter how low on the social foodchain, now feels empowered to get in other people's faces without repercussion...  I had it happen the other day... again.  I seem to attract the fucktards I swear...  I was, albeit illegally, utilizing a dumpster at the end of the street to throw a particularly noxious bag o'trash out... (a flat of eggs went bad)  Couldn't wait til trash day, and what the hell... giant ass dumpster, small bag o'kitchen trash, and sure as shit, some fucking busybody comes over, takes out his phone, starts recording and comes up giving me flak about it!?!
Guess he wanted his 2 minutes of fame...
Told him as much... he proceeded to lecture me about how much it costs to empty a dumpster like that yaddayadda...  I was all like "Is it yours?"
Him: "No but..."
Me: "Do I know you?  Do you know me?"
Him: "No"
Me: "Then what makes you the dumpster cop?  What do you care?"
Him: <puzzled clueless look>
Me: <righteous fury mode> "Seein's you don't know me, I could be a crazy, mentally unbalanced motherfucker with a handgun under my shirt, who particularly doesn't like nosy, stupid pig-i'gnint motherfuckers getting into my fuckin' business, and I then decide you need to be killed because you just filmed me disposing of my latest dismembered corpse, because I'm a serial killer, and you just pissed me off...   hows that make you feel now you dumb motherfucker?"
Him: <backing away while now sweating> "A...a..are you threatening me?"
Me: "Nope... purely hypothetical.  BUT I'm asking you, why the fuck would you bother someone you don't know and piss them off?"
Him: <clueless, stupid sheeplike look>
Me: <walking away muttering>  "That's one way of earning a Darwin Award right there..."
Duelling... I'ma tellin' ya, duelling needs to make a comeback...
Start Culling the Worthless Eaters and let us Predatory Motherfuckers make a comeback.
UGH
So yeah, people getting into other peoples shit?
In some circles, that's a killin'.
So, shit to think on... Mind your own damned biddness and things'll work out jes' fine
Jes' Sayin'
More Later I Remain The Intrepid Reporter
Big Country 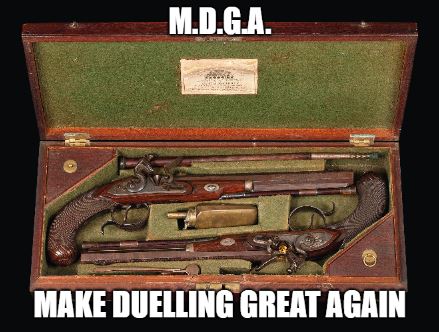 Posted by BigCountryExpat at 12:13 PM