The Beatings Will Continue

Greeting Me Droogs n Droogettes!
Yep... Beatings will continue until UNITY! is achieved.
OR ELSE!!! 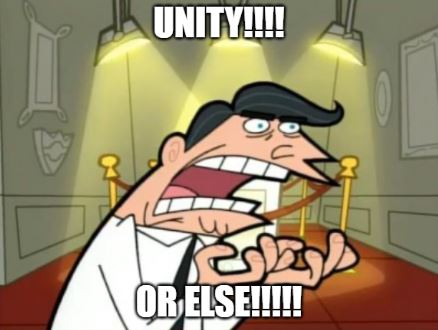 And I thought Lefties were nuts when the Obamamessiah came off the Mountain with the Free Shit Army and all dat Gibs that they wanted.  Apparently we ain't seen shit yet.  The current news I read is all insanity, mixed with propogandist shit that'd make even the most ardent believer barf.  In fact, its soooooo out of control, almost everyone, 'cept the most 'truest of true believers, are having trouble digesting this shytte
I mean when you have assholes like Greenwald, by no means a right winger, trying desperately to warn his (((fellow travelers))) of the potential hellstorm that's coming down the pike?  I mean what kind of wake up is it going to take?
Not sure?
Well, I can hanker a guess or two.
Some 'well known' talking head goes out to some regional disaster, and tries walking around in ankle deep water again, and gets decapitated live on TV by a .338 Lapua Magnum hollow-point, along with his whole crew....
Or someone seals the doors to a well-known senator's exclusive house at oh-dark early, and then throws copious amounts of Molotovs through the windows, burning them alive....
Then there's always just the "random walks up to someone and gets shot in the face" completely randomly... like in NYC it happens all the time  Even with security cameras, dude'll be walking down the street casually, and all-of-a-sudden, another guy walking towards him whips out a gat, and does a 3 second mag dump, and is never found or caught.
"Yo, that nigga dead yo!"
That still cracks me up.
Now, I'm not suggesting this be done, this's a "what if" because at the rate the fever-dreams of our wannabe oppressors are going, they seem to think that they can control the fire so to speak.  Ask Califrutopia how they handled them wildfires Oh So Well.
Reason they couldn't?
Years of kindling
Which is -exactly what we got now.  The illiberal officious and duplicitous Oligarchy and Wannabe Dicktaters have been metaphorically 'cutting down' the Constitution, Gun Rights, civil discourse and generally anything and everything considered to be "Right of Stalin and Mao" and man, that's a LOT of kindling right there.  Of course, that ain't enough for these sub-par morons.  No no no, they have to dance on aforementioned kindling, grinding it down even further to 'woodchips' and teeny broken pine branches.
Ever burn a old, dried out Christmas tree?  One that's all broken, tore up, and smashed... left over from loooong Christmases past?  We had a bonfire one time... made of a HUGE stack of nuthin' but Christmas Trees and pinewood pallets... all broken up.  The heat was so intense it melted the side of the trailer my buddy was living in from over 150 feet away...  The current pile of metaphorical 'kindling' that we have being continually added to by the Brain-Dead and Taterhead Slo?
If that gets sparked, it'll be a conflagration so large and hot, it'll make Dresden X Coventry X Hiroshima X Nagasaki look like a wet firecracker.  The burning will continue until not not of them is left.
Socialism and Authoritarianism/Tech-Oligarchy is a Cancer needs to be excised... if yer lucky, it can be done with surgeon like precision.
My fear is that at the rate it's going?  It's going to be 'meatball surgery' like in the first Civil War
"Shot in the hand eh?  Hand me that saw.  We'll take it at the elbow."
"Bite down on this."
Surgery like that is a stone bitch
And because of the functional illiteracy of out Want-To-Be Overlords (see "Books By The Yard" for reference) and lack of historical contrast, in that Boomers can't imagine life without them being in charge... look at the ages of our reps... Pelosi is eighty what? Slo is 78?  I mean, why are you still going?  Shouldn't you call it a fucking day?  Talk about retreads.  I've seen tires with better mileage.
So yeah, I sorta hope that they get their collective shit together
But part of me hopes not.
To quote/paraphrase the Jack Nicholson "Joker"
"This town (country) needs an enema!"
More Later I Remain The Intrepid Reporter
Big Country 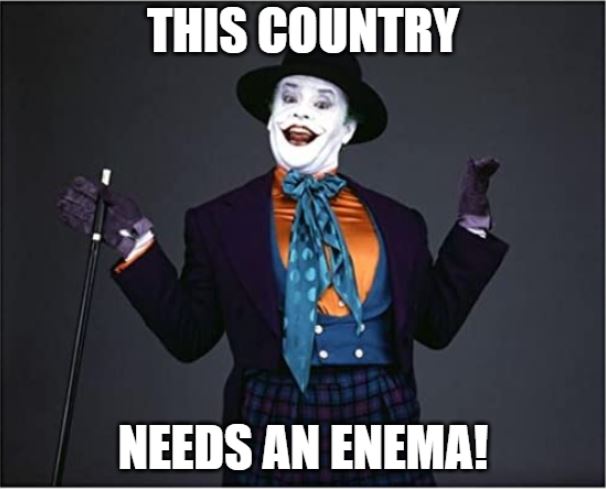 Posted by BigCountryExpat at 6:10 PM