Greetings Me Droogs n Droogettes!
As Sapper so succinctly put it:
"Eat, Poop, Sleep... Where the fuck they all doing this?" 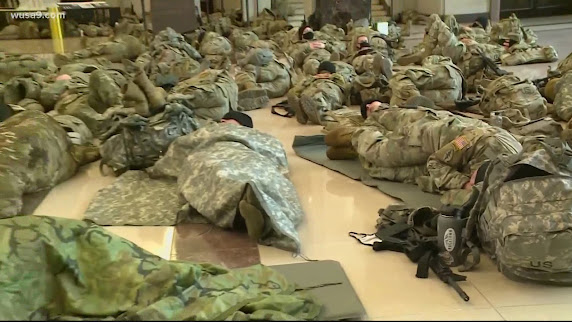 Good question
That can't be comfortable
Give me a soft warm bed of pine needles as opposed to a hard assed floor.
This is a very good question
Like valid as fuck.  Having done the Logistics Boogie I'll start breaking it down like Barney as far as the whole horror show that's ongoing.  You don't deploy 30,000 troops, in full Battle Rattle, ready to go, no matter how much "Rah Rah We're ready in 12 hours!" horseshit they got going on.
Even Regular Army had to get shit 'in place' before we got on the birds
We used to have various 'training cycles' on active duty.  Red, Amber and Green? I think?  It's been 20 years so help a brother out if I forgot the exact color designators.  Red Cycle?  That purely sucked.  That was the "support" time...i.e. mowing the Division areas, ass n'trash... total suck.  Amber Cycle?  Pre-Deployment readiness training.  Get the trucks ready-to-go and have yer battle rattle ready.  Green Cycle: Field training.  Out in the back 40 or in JRTC/NTC... another pile of lameness.  During Amber Cycle, right before the whole Bosnian thing kicked off, we had an Honest to God Alert.  We were all partying in Clarksville and got paged ('member them?) that it was 'go time'.  Ended up literally piling the passed out dudes into the cars, even in the trunks when we ran out of cockpit space.
All our trucks and shit? Pre-Po'd as we call it.  Pre-Positioned so we didn't have to fuck around with packing.  Everything on line and ready
And.....
Apparently they aren't as prepped as I thought though 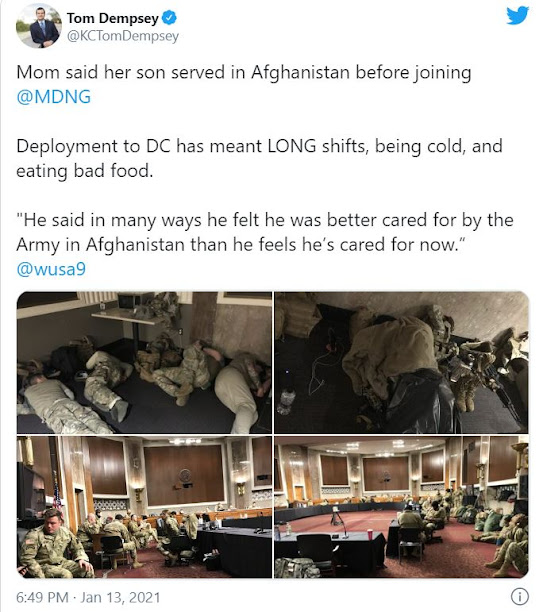 Link HERE
Seems that they're getting treated like shit, being fed shit, and hating life
The article if you TL;DR: essentially said that they ain't being fed right at all, and that they're not allowing them to even drink coffee, which, to be honest, I have a hard time believing.  If actually true?
Then the units are going on pure-dee chickenshit because of "optics'
So, guess the logtrains aren't keeping up at all apparently.
Like I said, 30K troops?  That's a lot of bullets, beans and boots
Also:  Where they all pooping?  CONgresscritters are territorial...
They put a bunch of porta-shitters all over?
And then, say nothing of the lack of certain units
Now, I haven't gotten any updates, but I -did- notice a couple of things.
I haven't see one Chemical Company
Nada so far.
They're the Bugs N Gas kids... Weapons of  Mass Destruction.  There's a lot of units in the National Guard.  Not one of them that I've seen so far  Which strikes me as somewhat counter-intuitive.
Every other "Big Event" has a team at least 'on hand' for a Just in Case "go to hell" plan is needed.  WMD is unfortunately a real issue, and they haven't sent any of them.
Medical Units?  None that I've seen again, so far
Again, they brought the mess-kit repair teams, but not a CASH?  Considering that yes, there are hospitals in D.C., I still think that the possibility of shenanigans would insure the deployment of at least a Medical Company.  I mean again, a Just in Case situation.  A lot of the gang in the NG are medics, but what about a potential Mass Casualty Incident?  Local E.R. are supposedly overwhelmed with the Bogus Beijing Booger Bug, so why rely on them?  Having a small field hospital that's experienced and trained for events like this?  Seems like a no-brainer to me.
Also, No Special Forces.  Leastways that have been talked about.  The National Guard has a lot of Green Beanies in it, and they ain't 'round, leastways no one's admitting to it
Silent Professionals I guess.
UPDATE:
Link HERE
Per DiveMedic, we're -now- seeing a Medical unit deploy, as well as elements of the NBC Kids...
Interesting
Almost like they're reading my shit and reacting?
/sarc
OK: So, where's the beer and pizza unit?
Those poor bastards sleeping on the floor look like they could use some
So, More Later If I think of it
I Remain The Intrepid Reporter
Big Country 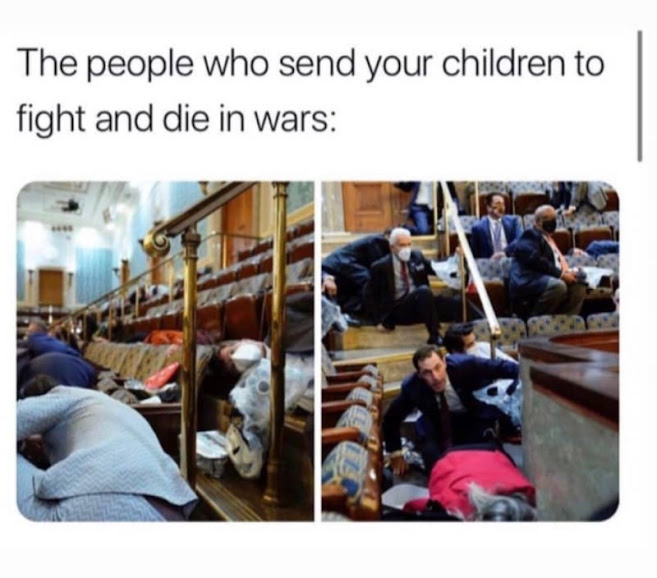 Posted by BigCountryExpat at 5:57 PM