Greetings Me Droogs N Droogettes!
Couple of questions vis-à-vis the Loyalty checks we've been hearing aboot.
I was still in when the first one happened.
It was under Clinton, shortly after Waco.
1994.
I was stationed at Ft Hood right after
Also known as "The Hood"
Still known as "The Hood" from my understanding.  A total hive of scum and villainy.  Always has been, always will be.  However, after the whole shit-show in 1994 of the feds having the DotMil participate in the roasting of 25 children, never mind the 'other' 51 adults who burned to death under the auspices of the ATF and out oh-so-loving Federal Law Enforcement Entities 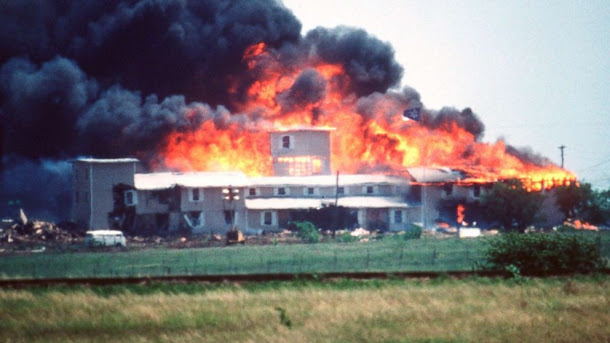 Considering that they could have nabbed Koresh in town two days before, but waited to do a "Hollywood" takedown that went south?  Fuck them all
For Eternity
Any wonder why we hate them so much?
Yep.  A few years after that particular shitshow, suddenly the Department of Defense showed up... think it was 96-97... BIG survey... wanted to 'question us' on our 'feelings' about 'sensitive subjects'.  Let me tell you, any asshole in uniform'll tell you, when HQ/DoD shows up, even in a simple survey asking questions, things have gone seriously sideways
Among the 'casual questions' asked of us, was the blatant outright question of:
"If ordered to, will you or will you not fire on American Citizens during a declared State of Emergency?"
I won't forget that one
No definition, no question of Posse Commitatus...
Just "Would you shewt motherfuckers if we tell you to?"
Y'all gotta understand.. this was to an active duty unit
By the Constitution, we were not legally allowed to be deployed within the Continental United States.  Still aren't.  But don't tell them that.  From my sources, the overwhelming response was that not only would the order not be followed, there was a good chance that the ask(er)/order(er) would be dragged out and shot/hung for asking/ordering such orders.
So....
Apparently they asked it again in 2012..
Same reply... even more Hardcore from my sources... "Not just No, but Get fucked, Because Fuck You That's Why, and Die in a Fire and BTW, where does your family live?  We need to kill them too, just to be sure... no offense."  The new breed is far more hardcore than we were, but then again, they've been fucked over far more often than we ever were...Mainly because war(s) or something...
Jes' Sayin'
The fuckers in charge have no idea what the lower ranks have as an attitude.
So...
They just went and did it again 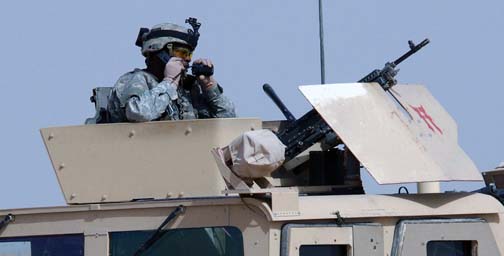 I think that the Coup Players are extremely nervous
Terrified in fact
Asking about the loyalty or at least ordering 'higher-higher' to ask the scum...er... the troops just how they feel?  Jesus.   They want to make sure the guy in the turret on the "Big Day" doesn't bust out a belt of 'home cooked' 7.62mm and burn them all the fuck down on his 240.
You can bet they're going to run out of snipers on that particular day given the obvious panic and pants shitting they're experiencing.  There's only so many lanes a good sniper can watch, and I -know- that they're going to be Aiming guns on the guns, and probably on the guns ad infinitum, leastways until someone has a nervous breakdown.
The loyalty question though?
That is a big part of the issue
Just by asking they've compromised the situation further
You don't ask
That's like questioning a Samurai about his loyalty 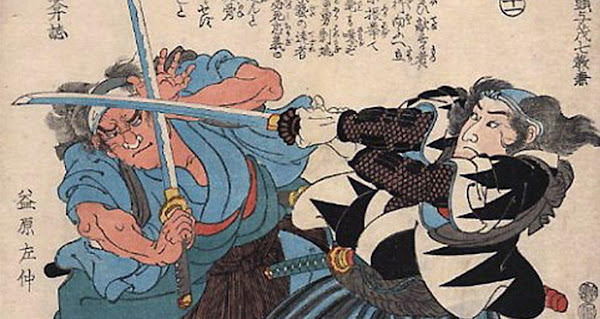 "That's a killin'"
You just don't ask or question it.
The Marine's motto,  "Semper Fidelis is the motto of every Marine—an eternal and collective commitment to the success of our battles, the progress of our Nation, and the steadfast loyalty to the fellow Marines we fight alongside."
The same goes for regular troops...
It's about Honor
You don't openly question that 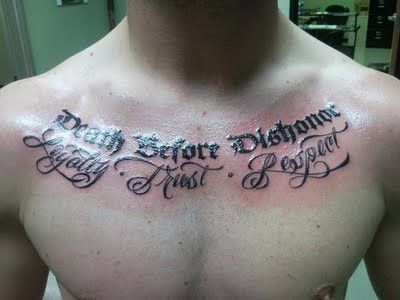 People even get tattoos indicating their fidelity to Honor...
To their fidelity of their Units...
To show pride in their Service...
Not everyone permanently marks theyselves for life as a way to show this.
However
We all feel the same way
And to question that is the penultimate in foolishness
They question us, and by way of it, they question because they themselves lack any sense of Duty, Honor, Loyalty or Country
They. are. bereft. of. these. things.
They worship power, control, and money
They should-never- be allowed to take control
And if they do, God help us all.
More Later I Remain The Intrepid Hungover Reporter
Big Country 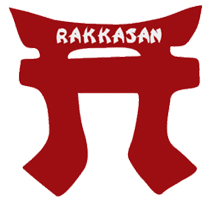 Tatted on my shoulder...
Jes' Sayin'
Posted by BigCountryExpat at 10:32 AM