Greetings Me Droogs N Droogettes
OK... Nightmare Scenario:
Biden not only takes orifice, but stays alive to keep doing China's bidding.
The Senate falls under the Democrats due to the continued peak bullshit of the Georgia race
The Newly Installed Members of "The Free Shit Army" begin getting reparations
MOR Free Shit for evvabody
'Cept you whitey
Because reasons and sheeeeit
And no one does a fucking thing
Everyone just sits there.

I mean worst. case. scenario.
Shortly after taking office, MASSIVE gun laws outlawing -everything- that holds more than two rounds gets outlawed
And all the Cops get told "Bonuses for every gun collected"
(So much for the 'muh Constitution!')
No buyback mind you
(Not that there's such a thing... we bought 'em from private enterprises you socialistic fuckwits)
Just turn 'em in and "no one gets hurt"
(Again, neggin' on 'Muh Constitution!' and "Cold Dead Hands")
China assists in rolling out a "Social Credit Score" and partners with Facebook and Twitter
It becomes "Day Zero"... just like in Cambodia.
Everyone gets a 'fresh start'
Nothing from the past is held against you.
Pseudo-Patriots, fat and lazy, race to take advantage of the newly implemented Basic Universal Income, rather than fight.  "I'm <fill in the blank> to risk anything.  Besides, this's a fresh start."
(Yet Again, So much for the 'Muh Constitution!')
It's going to be a Pig Trap.
LOTS of carrots and corn
With the stick being wielded quietly in the background.
Now, Granted
Guys like me'll be a blurb on the Propaganda Channels
"A mentally ill veteran today was killed in yet again a lone wolf attack on the Beloved Party leader of <insert locality>.  The Supreme Leader (Peace Be Upon Him) sent his magnanimous condolences from himself and the Party."
And yeah, they'll still allow us to vote
No worries there.  Even the Soviets and North Korea have votes
However
What choices will you have?
It'll be like Romney V Obamamessiah
Both made me want to vomit in my mouth when I went in to vote that year.
Lesser of Two Evils
What will it be like in 2024?
At the rate we're going?  It's ugly-er
What we need to be is 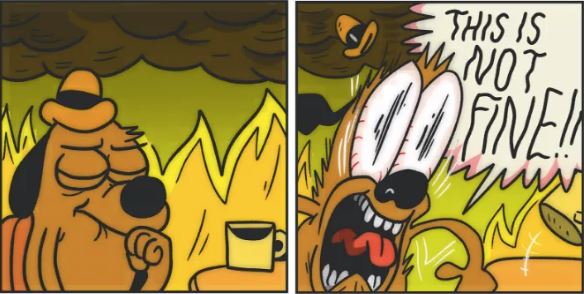 THIS is where we should be.
Unfortunately, we're in Panel One.
And I don't see meaningful progress
LOTS of Hopeium, Copium and Bullshit
Peak Bullshit

Right now, we're like the dog in the first panel.  If'n we collectively don't get off our arses, we're completely and irretrievably FUCKED
Tell me I'm wrong.
Because if we DON'T act shortly, we're gonna be here:

Panel one to this has sorta-kinda sucked a Dead Rhino Penis that's been out rotting in the Serengeti for a few weeks...
This final panel?
OMFG...
Try a Dead Rotted Rhino Cock with a side of Fermented Warthog Jizz as an aperitif.
Yay.  Yummy. NOT
'Cause (((they))) sure as shit have a plan
Short-sighted as it and they may be
BUT
We -can- short circuit them.  Area denial.  Individual Tactics
And if -someone- gets theyselves hurt, injured or killed?
So. Be. It.
War to the Knife
It's the only way to be sure.
Sapper disagrees with this particular poast.
I give him a certain 'editorial input' seeings that a lot of the time I'm writing while madly ker-blastamated on Finlandia.  Then again, anyone who's gone done and read my shytte from Iraq -knows- the majority of my best writing is when I'm boogered
In Vino, Veritas as they say.
Fuck'em.  He thinks I'm too far over the idea I reject the concept that we'd evolve into into the 'we'd never allow it to get this far' land....
Meaning that the Patriots and Veterans would rise up in an unstoppable swarm and overwhelm the forces of darkness.
Now, granted... thats got a -bit mor- hyperbole than he said.
BUT boiled down to it, it's his belief.
Me?
I'm a realist
The Iraq Dissolution and Civil War (that's what it was no matter what the DoD or anyone else sez happened) was primarily fought by people with nothing to lose
The folks who had family, investments, infrastructure (a house) or even a decent job stayed the fuck out of the unpleasantness if they could at all.  The -average- non-political Iraqi just wanted his cous-cous bowl filled daily, his wife not raped and his childrens not blown the fuck up.
Not a lot to ask Aye?
However
The same thing applies here.
On both sides.
Meaning IF we want to take the combative "high ground", we're gonna have to go low.
Ugly?  Betcher arse it is.
Brutal?  Fer sure bro...
Necessary? Absolutely Goddamned right it is.
It ain't all Skittles and beer as the Brits would say.  It's going to be a knock down drag out bloodfestivus that'll wait til one side or the other cry "Hold!"...
Which means the most brutal player wins.
That being said, a victory like that isn't victory.
It's the stank of stacked corpses.
Dead Children.
Piles of Skulls.
Horror on Top of Magnified Horror
Until you either harden your Heart, or be consumed.
"And if you gaze long enough into an abyss, the abyss will gaze back into you." Nietzsche.
The abyss beckons
Are you willing to stare back?
More Later I Remain The Intrepid Reporter
Big Country

Posted by BigCountryExpat at 9:43 PM