Greetings Me Droogs and Droogettes!
Merry Merry Happy Happy and appreciate all the wishes from you degenerate Bastitidges.  Now... lets get down to biddness vis-a-vis the Bombing in Nashville.  Thus far, intel gathered and released:
1) Happened on 2nd Ave in Nashville.  I know it very well.  It's the main, (or leastways was) drag for the partying scene for the 101st back when I was in.  The Hooters that got obliterated?  Pulled many a fine young thing out of there back in the day, and got tore up from the floor up there.  My unnastanding is it's still a big time go-to for fine food and night life, though it's been severely impacted as Nashville's been exceptionally retarded via CoronaChan.  However, 0630 am... no one oot and aboot there at that time...
2) It was an RV.  Drove up and parked right across from the AT&T Datacenter.  Which subsequently went tits up when the bomb went ke-blammo.
3) The RV apparently broadcast a warning via PA before it detonated.  The sound of it was a pre-recorded female auto-tune from the sound of it warning that people needed to evacc before it blew.
4) -Someone- called the fuzz and said a shooting was going down right before the bomb went ka-boom.  Draw in law enforcement like Eric Rudolph?  Either way, the warning got the cops to back the fuck off before it blew, so no losses there 'cept from the sound of it, overpressure and minor shrapnel wounds.
5) When it blew, it, from the vidya I've seen was NOT an AMFO (ammonium nitrate) Timmy McVeigh style bomb... hell, the bomb that took out OKC wasn't AMFO either, no matter what they say.  Another subject for another time.  AMFO, while kinetic is a 'slower explosion' if'n you will... you actually need a bomb to detonate AMFO properly.  This vid I've seen... man, like BOOM instant mode.
6) The pictures of the remains and such.. blast damage and whatnot... Very dirty... lots of carbon.  Lots of -stuff- that isn't part and parcel of the explosions and VBIEDs I've dealt with.  No obvious signs of Propane tanks either.  Propane IEDs usually leave some obvious tanklike residue.  They blow, but those tanks are motherfucking tough and hold up really well even when blowing up.  Look at some of the archived pics of some of the bombs that went off in Iraq... the propane tanks usually split and rupture into halves or split and stay in one piece, becoming a fast-moving LARGE chunk of shrapnel on their own.  They -don't- however blow up like grenades... the skin is too thick by design to stay pressurized. 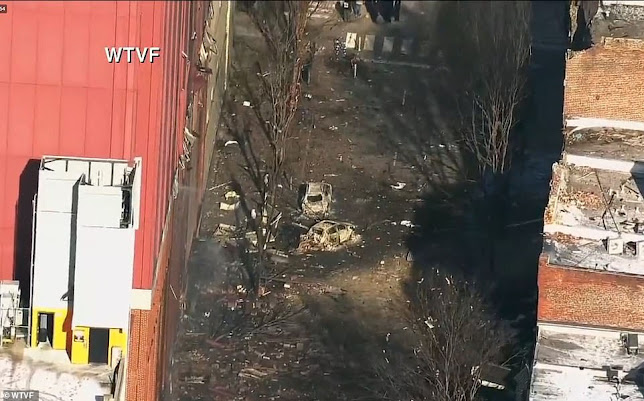 Whatever IT was though totally and utterly vaped the RV
My call?  A Metric Fuckton of Black Powder or home-made PETN or the like.
7) No suspects -yet- And yet they have a pic of the RV with the driver?  And no close up of the driver yet?  What with the abilities that computer enhancement has these days?  That means they do not want to ID the driver yet.
8) One last observation from the pics... Cars immediately near the center of the blast, obliterated.  Cars half a block up? See the pic below: 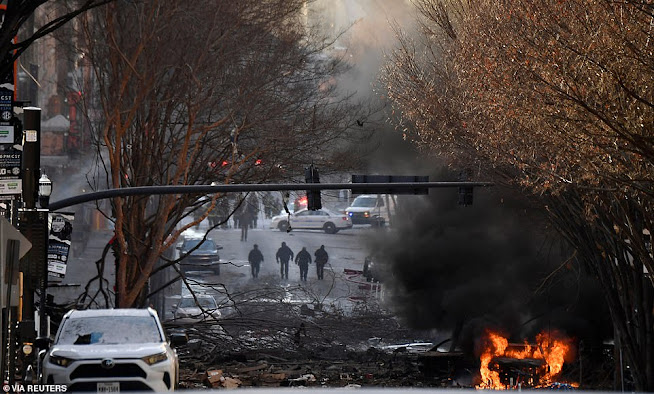 The Toyota right there has the windshield have a hole blown in it but NOT completely blown out.  The Suburban a block in the other direction?  Looks fine and in other pics, it's literally not damaged at all.  However, the blast is very confined... almost directional
Trees at the det-point, splinters and shredded.  Trees 20 feet away? shrapnel damage/blast damage but still have most of their branches.  Hell the leaves are still on a few of them. 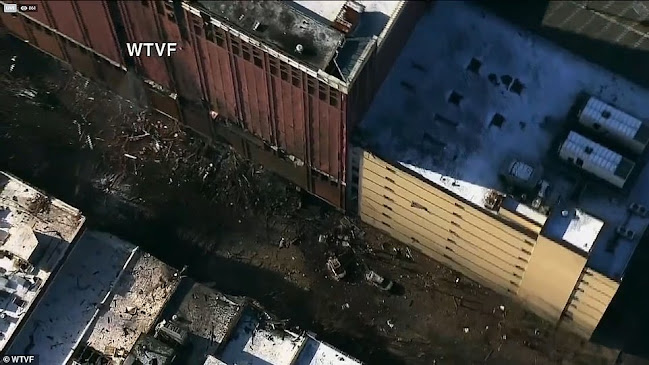 The red building in both pics I'm poasting... that's the AT&T relay center.  Took the brunt.
Comms got taken out hard
As well as the airport's Air Traffic Control grid.
So... to me?  That's a very specific attack
Communication Decapitation

So, a puzzle within a conundrum.
I ain't no expert by far.  I have however been around enough VBIEDs and IEDs and the aftermath to say this was a really BIG fucking ka-boom, with multiple layers of safeties built in, with the PA system being one I've never heard of before.  The closest I can think of is that the IRA used to call the news before a bomb went off to allow time for people to get clear if it was a civilian target.  This?  A fucking PA playing music between the "The vehicle will self destruct in -X- minutes, Please evacuate the area"

Just who in the fuck does that?
I mean talk about the most polite and careful terrorists in the world.
Good on 'em
But then
What was the real objective?
'Cos the Fibbies are going to lie and obfuscate
The Fuzz are going to do the song and dance
It's all bullshit
That ain't conspiracy theory.  It's fucking fact
As a buddy of mine's Italian Grandda used to say, "No matter how thin you slice a turd, it's still shit."
And this 'un here?
Gonna be jazzed that it was "White Supremacy" even if it was Da'Quan Dindunuffin the Third who was behind the wheel... one of those African-Caucasians prolly.  Or mebbe a White-Negroid.  Either way, they found pieces parts in the AO... the DNA IF they ever tell us the real deal would be interesting.  BUT
The Feds always lie.
It's the default setting
So, make of it what you will, but to me?
An old "Iraq/Affy Hand" who's been there done that?
My Weird Shit-O-Meter is pegged at an eleven
Literally... my shit sez "Does not compute, Error 503, Failure to Load"
And that bothers me
On a very significant level
Cause I'm the best planner and out-of-the-box wargamer/planner I know... there's a couple others, whom I'ma gonna hit up in a day or two for consult.  Dis shit is unpresented.  A very specific target, the AT&T Comms relay point.  A very polite bomber who kindly warns everyone to GTFO now before the bomb goes off.
Things that make you go Hmmmn indeed.
So, gotta cogitate on this 'un here and get some more professional opinions.
Like I said, this un here is a first as far as I know
More Later I Remain The Intrepid Reporter
Big Country
Posted by BigCountryExpat at 9:27 PM