Greetings Me Droogs and Droogettes!
In keeping with "Training Ops" we have a fan favorite.
The MK-19 or Mark 19 40mm Fully automatic Grenade Launcher.
Also known to the enemy as "Oh Shit!" when they hear the familiar "Chuga-Chug" of it firing. 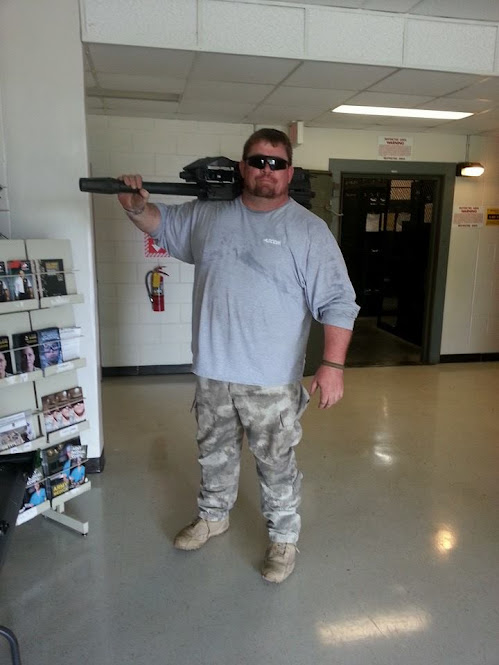 Again, MORE than a passing knowledge of it
In fact, in my Company, Delta Dawgs of the 187th (Heavy Weapons) I was known as the "Gun Guru" due to my mad skills with the TOW and MK19.  I regularly did shit with a MK19 that people literally thought impossible.  Firing up targets out of range? Yep.  Tracking my rounds into a building, windows first, to drive out the bad guys and -then- dropping 5 rounds of HE at the door to smoke 'em (at max theoretical range mind you), Been there, done that, got the t-shirt.  I was a fucking artiste with this beastie.

BTW, the way I kept on target at over max elevation?  I painted a white line down the barrel from the muzzle to the rear site.  Let me 'see' the range and target so to speak past the max elevation... worked like a charm.  Hint for y'all who might be active duty out there... however, there IS the law of too much el = shorter throw.  Know your gun young Jedis.
So... got to keep playing with and working with the 19 as a Gunmaster for the Army as a civvie. 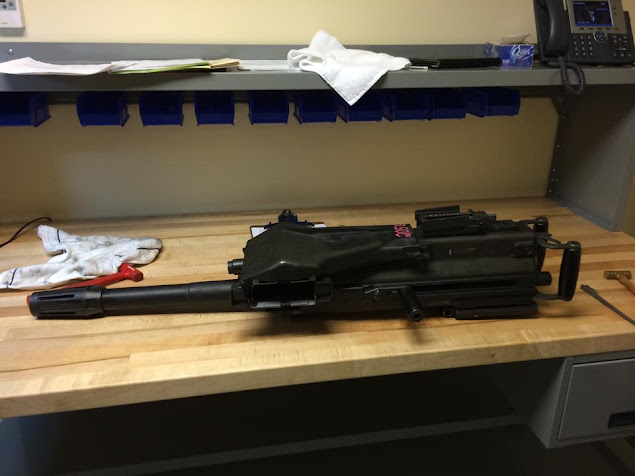 Fully assembled and about to get T.I.'d (technical inspection)
And then, 5 seconds later... 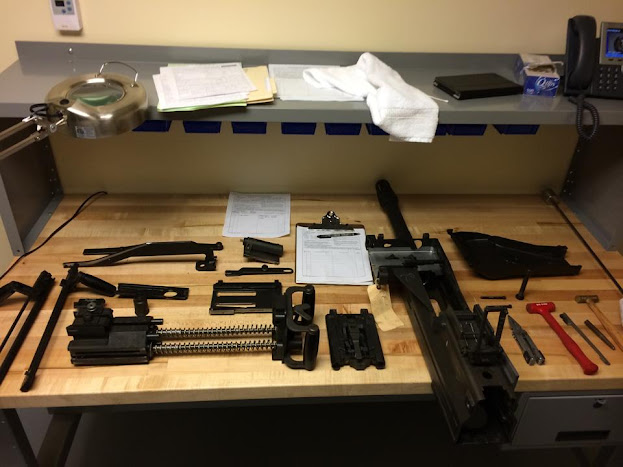 Ripped and Stripped to it's major sub-components.
The MK19 started life as the MK18.  The MK 18 was a Navy Weapon, assigned primarily to their Riverine Boats and Fastboats used to pick up Navy SEALs in deep shit.  Belt fed, and hand cranked, the MK18 was a 40mm grenade launcher who's rate of fire depended heavily on the level of panic that the guy running it had.  If he was freaked, prolly 500 RPM as it was, like I said a hand-cranked weapon.  The Aviation units realized the advantages of this thing, and it got adapted with a small motor instead of a crank, motorizing it.  It got initially loaded onto the Navy SeaCobra birds, but shortly after  EVVABODY wanted in.  Fully automatic grenade machine gun?
Fuck to the Hells to the YEAH!
So, post Nam, it got some upgrades.
The hand-crank went buh-bye.
The Bolt got beefy
As in 32 fucking pounds of beefy.
Officially, it's a air-cooled, open-bolt, belt-fed, recoil-operated, fully-automatic 40mm High-Pressure Grenade Machine Gun.
It's primary parts consist of receiver, bolt group w/springs and rear plate/handles firing group (all attached) two side rails with cocking handles, feed tray with slide and overhead tray, and ogive plunger and plate.
Not much else.
It's a heavy sumbitch.
Tilts in at a total of 78 pounds with no ammo, or equipment.  Usually used with the M3 tripod and MK64 multiuse pintel mount.  More than likely found mounted in a CROWs system or on the roof of an Uparmored HMMWV.
Generates 500 Foot Pounds of Pressure per Shot.
The Bolt, being recoil driven weighs in at 37 pounds
Ain't no joke.
Pieces Parts: 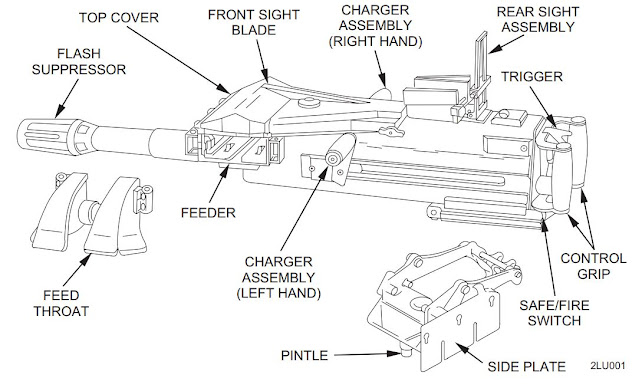 Pretty straightforward
Important User Note:  You need the feed throat for this thing.  If it's missing, you need 'someone' to assist in loading the ammo like they did in World War One... the feed throat makes life  much easier.
Loading and Firing: 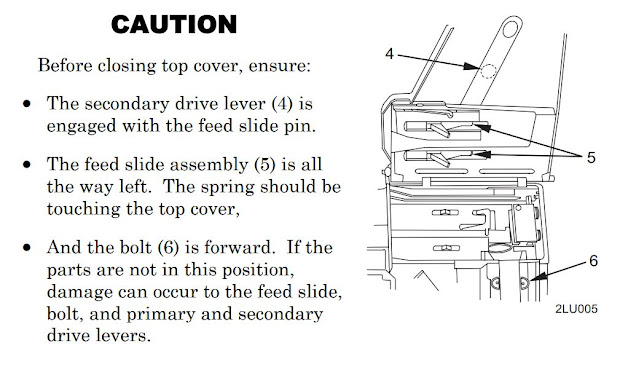 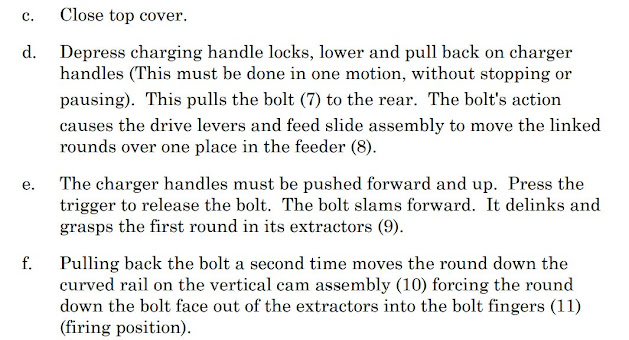 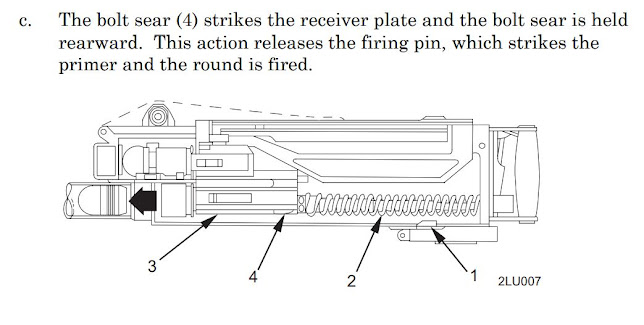 So, thus concludes the loading, and firing on the MK19.
The empty 'brass' if you will and links eject down like a Ma Deuce.
Straight out the bottom.
The recoil on this thing precludes any 'home-cooked/made' mount, unless -someone- has extreme welding skillz
B/C this thing is a beast that rocks an Armored HMMWV back and forth on it's shocks.
This's why you cannot afford to mix up high-pressure 40mm with low-pressure 40mm
Ammo for this Beastie is as such:
MK281 TARGET PRACTICE ROUND (blue/white w/olive drab)
M383 HIGH-EXPLOSIVE ROUND (olive drab w/yellow and olive green)
M385A1 TRAINING PRACTICE ROUNDS (blue/black w/olive green)
M918 TARGET PRACTICE ROUNDS (blue/white w/olive green)
M1001 HIGH VELOCITY CANISTER CARTRIDGE (HVCC) (metallic green and olive drab)
M430/M430A1 HIGH-EXPLOSIVE DUAL PURPOSE ROUND (yellow and olive drab)
The obvious part is to look around the 'collar' of the round... if there's a link or marks where a link -might- have been, figure it's a High Pressure round and do not fire it thru a M203 or M320
That'll ruin the weapon and your life.
Actually, they make it pretty easy to figger out which is which.
Between the markings and the fact that getting the link ring offa the MK19 rounds takes an act of Congress and a Leatherman... 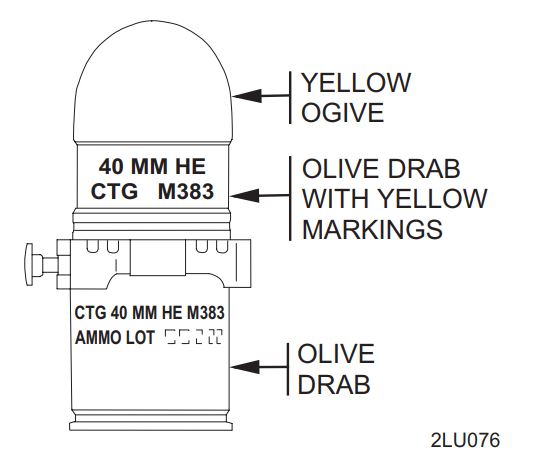 Now, on the off chance you snatch one of these during the "Loot" phase of "S.L.&S", you'll need the M3 Tripod, as this thing, despite the Terminator Movies, ain't being fired by hand.
It mounts thusly: 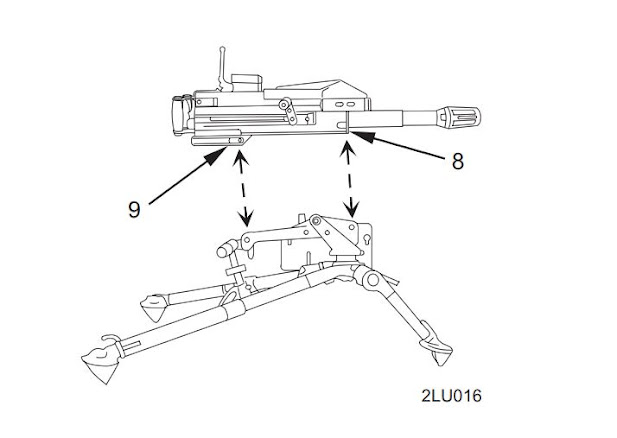 More on The MK64 mount later.
It's cool but boring
But
That's what Logistics is
This's a multiplatform weapons mount.
M2, M240, M249, MK19
Prolly more nowadays.
Multi-use, Multi-task.
More Later on that.
BTW:  Another Quick But IMPORTANT USER NOTE
Say you and the boys successfully did a 'bush on the Guard.  Got lucky.  No casualties, and got a shit-ton of loot.  Lotsa good and cool weapons, even a grenade launcher and ammo.  Read a story back in the day and downloaded the 'how to' on how to basically run it 'gud enuff' so's Bubba and yew kin use it next interfacing with the goddamned revenoo-ers.
Y'all start bangin' away and Bubba hollers out mid-firefight:  "Hey man, this's here jammed or not firing!  It wuz workin' pretty good a minute ago."
Uh-Oh....
GTFO of Dodge boys...
LEAVE IT.
WALK, nay, RUN THE FUCK AWAY.
This from me.
We never, fortunately had a jam, misfeed, or hang fire.  The drill is to leave it the fuck alone
And call EOD
That's the Explosives Ordinance Disposal Kids...
That was standing orders back in the day
Put it on safe, and clear the fuck out
Of blast range preferably.
Dunno if that's still SOP, but back in the mid to late 90's?
It's a high explosive grenade that done jes fucked up and didn't work
How the fuck should you treat it?
It's not like a 5.56mm round that had failure to fire, but a 5-meter-killzone fucking bomb
Only time I heard of one going sideways?  The EOD kids had to go out and blow the whole fucking thing in place with a quarter pound of C4... better safe than sorry...  they did a writeoff of that particular gun...
"Run away! Run away!" Is my advice in OUR possible position...
FREEFOR ain't got the time nor peeps to handle something like that.
No weapons system is worth dying over.
So, More Later, I Remain The Intrepid Reporter
Big Country 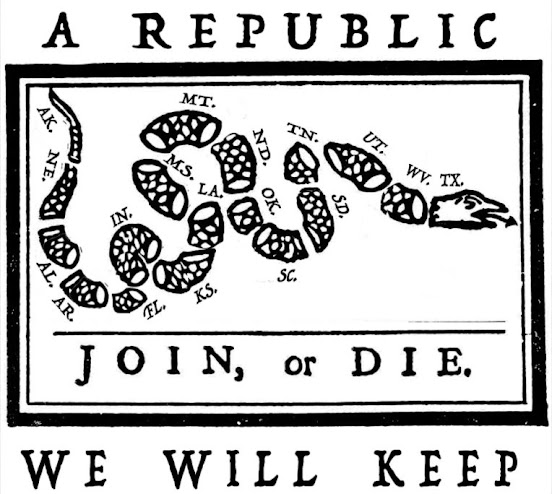 Posted by BigCountryExpat at 8:27 AM